My trip ended a while back but sponsors are still approaching me 😀 Is there a message there somewhere…?

Big thanks to Warp 9 Racing for sprucing up sanDRina with this beautifully-machined, adjustable front brake lever along with other levers, an oversized 320 mm brake disc, chain guide, handlebar riders and an improved design starter motor cap.

They’re out of Salt Lake City in Utah and make bespoke accessories for dirt bikes, specializing in rims, and have recently gotten into making parts for the Suzuki DR650. Thank you Warp 9 for showing the DR some love!

If you’re not a gearhead, it’s like sanDRina just got a pedicure 😉

Dreaming of Ladakh…
Crisp mountain airs, Snow peaks all around…
Throttles twisting, Motorcycles leaning…
Zen and the Art of not being distracted!

On July 6th, 300 bikers from Delhi came out for a celebratory ride in my honor. Wow, I feel the love and felt so honored and welcomed! Thank you, guys!

Ride announcement by Joshua John, the organizer of Delhi Bikers Breakfast Run. He works hard at bringing all the different clubs together.

A similar picture was taken at the start of the trip and now this completes it. :norton

sanDRina and I riding… what we do best.

Riding with Delhi Bikers. 300 of them to the horizon and beyond!

Being presented with a ride t-shirt.

Answering lots of questions about the trip and all the features on sanDRina.

With the ride marshals of DBBR. They would ride ahead and stop traffic at intersections so that the long line of riders could continue without breaking up. Nicely done.

Crazy energy from all the bikers there!

Thanks to everyone that came out!

Wow, I feel the love! 300 Enfields, Bajajs and everything in between to the horizon and beyond. Thank you Delhi Bikers for riding out in my honor! What a grand way to celebrate the end of my journey. I feel so welcomed by my new family of riders in Delhi 😀

Thanks to Joshua John for setting this up and all he does to unite the riders in Delhi!

Here’s a video detailing why I chose the Suzuki DR650 as my bike of choice for my three-year motorcycle journey from Chicago to Delhi and then specifically, what are all the features on sanDRina that bring her up to Adventure Spec.

Ha! Found the culprit: clogged fuel filter. Replaced it with a new spare and sanDRina runs like a champ! Went for a 60 km test ride and no issues. I think that was it 🙂 Continuing south tomorrow.

Come on, motorcycle gods, what else you got? Let me have it.

I got jolted last night and told myself that ‘give up’ isn’t in my dictionary. I beat my demons back in their cave and listened to the advice from biker friends who directed me to inspect this part. If I don’t make it to the next town tomorrow, I’ll figure it out 😉

I made it back to Kibondo. Bus journeys were a bit rough but I passed the time by listening to Zen and the Art of Motorcycle Maintenance on audiobook to get in the mood 😉 Good tips in there, such as knowing that all bike issues can be traced to rational, objective causes and not voodoo magic, although electrical issues seems like that :p And then it goes deep into philosophy, with a long treatise on ‘quality.’

sanDRina was patiently waiting for me just like I left her, along with my other gear. I installed the new parts and she fired right up, sounding good. Went for some extensive test rides today and so far sounds like the issue has been solved, but I can’t say for sure until I cover at least a 100 kms and get to the next town.

During my break in Kenya, I acquired some sponsors to replace gear and parts that had worn out during the first part of my trip from Chicago to Nairobi. I also got some sponsors for a few new jazzy parts, like Pivot Pegz. But the major items for this rebuild on sanDRina were to replace bearings and the braking system and fix my spark plug thread issue. Milan, an Indian-Kenyan biker and mechanic helped me out with the rebuild at his family’s workshop.

I had a big list of tasks for refreshing sanDRina and this is everything that was done: 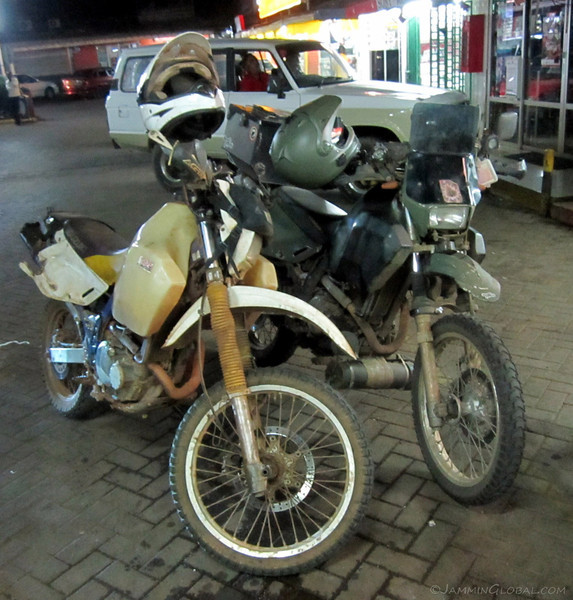 Two touring DR650s in Nairobi. I met Mike and his lovely DR here, who’ve traveled down the west side of Africa and were coming up the east. It was nice for the girls to have some company while we talked about the differences and similarities of our bikes. 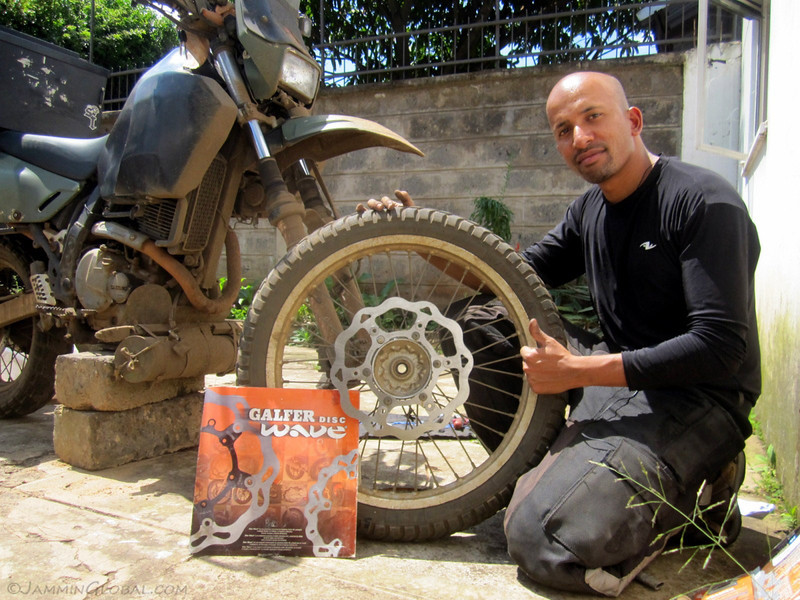 Replacing the front rotor with parts from Galfer.

The clutch that I installed in Mendoza, Argentina, was finally starting to fade after lots of mud riding in Ethiopia. Nice shot of the clean internals in constrast with the dirty externals. 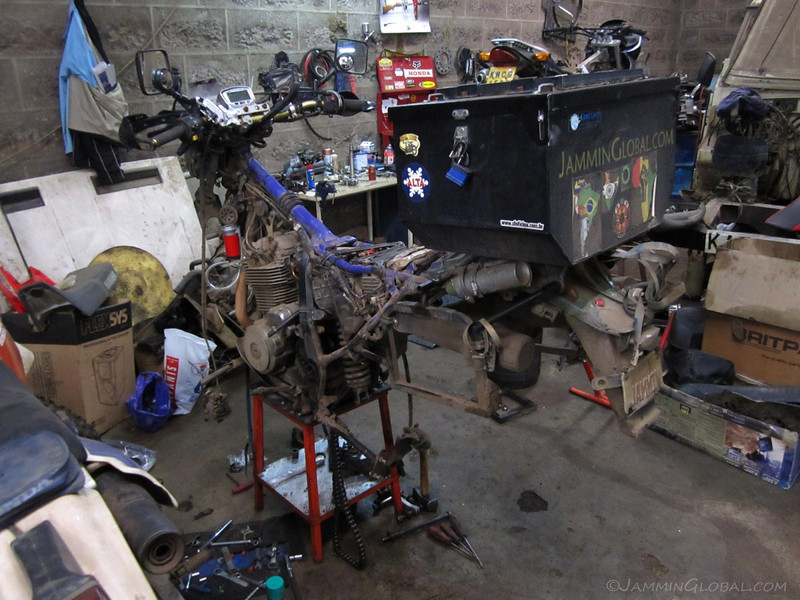 sanDRina stripped down in Milan’s shop in Nairobi for a three-week rebuild. 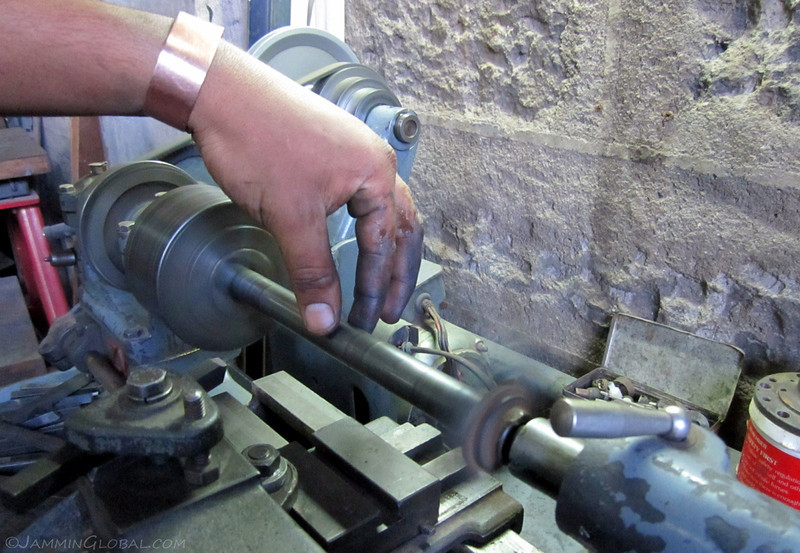 We checked the axles and noticed some wear, so I contacted a guy who was parting out a clean DR in Arizona with low miles and acquired a lot of chassis parts at a low price.

RAD rear hub installed with new spokes and Galfer Wave Rear Rotor installed. Thanks for the parts donation! Kenda K270 Rear Tire installed. I’ve been carrying this tire all the way from Santa Cruz, Bolivia! Not my smartest decision but hey, I have a new rear tire now. It only needs to last till South Africa where I’ll be picking up a new set of sponsored Heidenau K60 Scouts.

Brake calipers replaced with almost-new parts from a very clean 2006 DR that was being parted out.

It was a good thing we were replacing the swingarm bearings because they were destroyed.

Uh oh, loose chain riding (in Brazil and Ethiopia) lead to the chain eating through the chain guide and a bit into the swingarm. 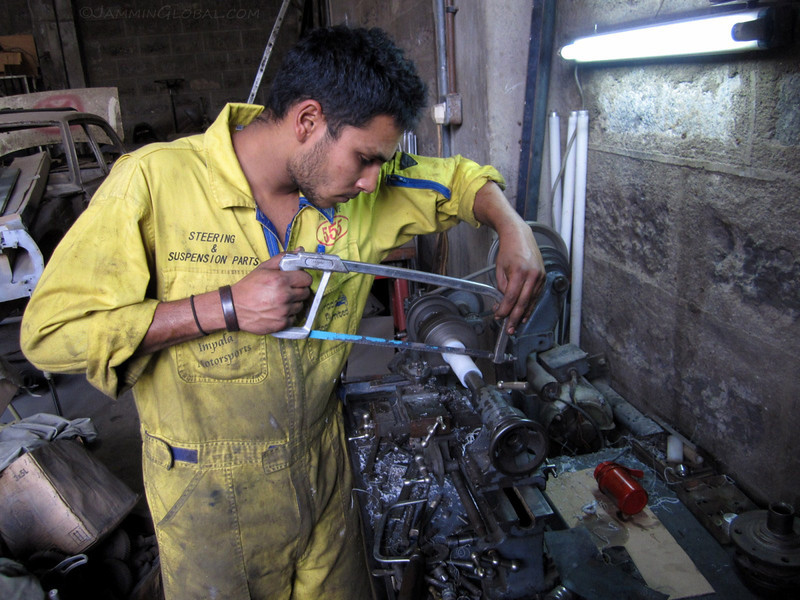 Milan cutting me some new polyurethane spacers for the springs in my front forks. The old ones were deformed.

We couldn’t rebuild the rear shock, but Milan’s experience allowed us to check the dampening ability of the shock and all looks good.

Lots of fun moments working with Milan. Here, we’ve just installed the almost-new shock lower mount and the dog bones are going in next.

My Stebel Nautilus Compact air horn stopped working a while back and with the help of Milan’s brother, Dhruv, we figured out that the compressor was dead. I was lucky to find this replacement, which seemed very similar to the Nautilus, except that it wasn’t packaged for a motorcycle. It got painted black. 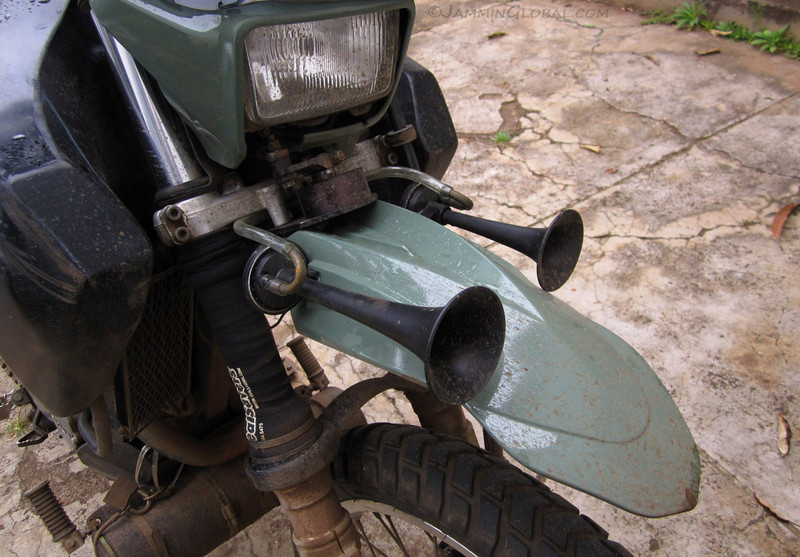 The new air horn came with two huge trumpets that got mounted on the front fender. It changes the look of the bike a bit but I like it.

Bolt hole for the exhaust mount had become an oval with all the vibrations. A bigger hole and bigger bolt fixed that.

On the engine, I had Milan take a look at my spark plugs threads. In Switzerland, I discovered that the inner spark plug was cross-threaded and it broke when I tried to remove it. The quick fix then was to rethread the hole but it was too loose, so the threads were banged in and the spark plug held. That fix worked up to now but Milan recommended putting in brass inserts with new threads. 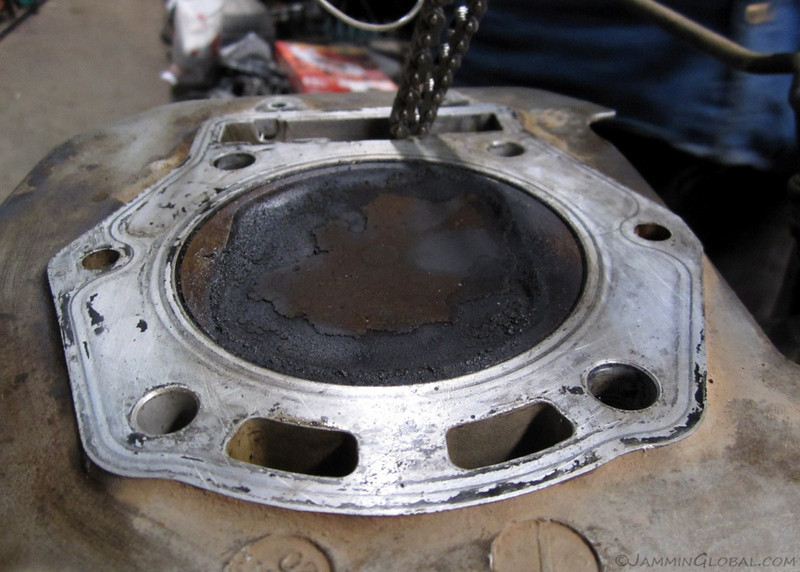 The cylinder head was removed and given to a specialist shop for fitting the brass inserts. Since we were in the engine now, might as well check up on the piston and all these deposits on the piston head revealed that sanDRina was not running properly for a long time. Milan wire-brushed all that off.

Milan heard a ticking noise and suspected play in the piston pin, so we removed the cylinder and did notice wear on the piston pin. He said thicker oil and more frequent oil changes should fix that. He checked the state of the conrod and all looks good with adequate side-to-side play and no up-down play in the bearings. 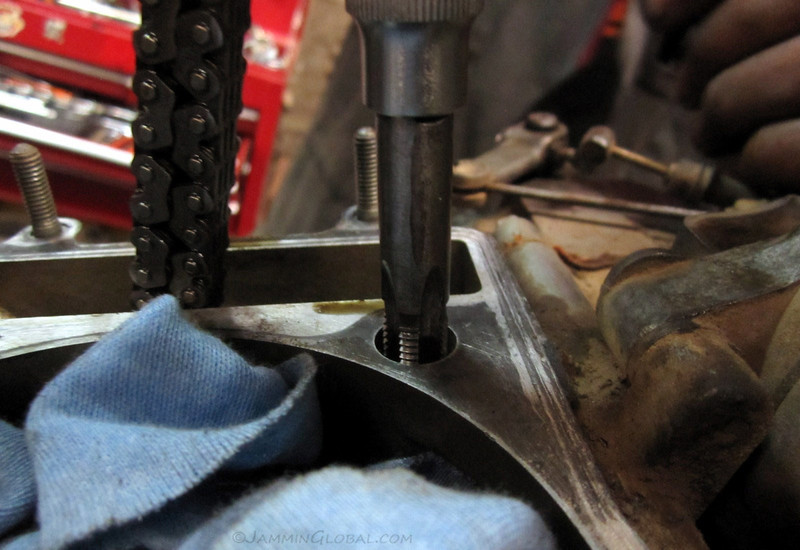 Cleaning out the threads for the cylinder head bolts. 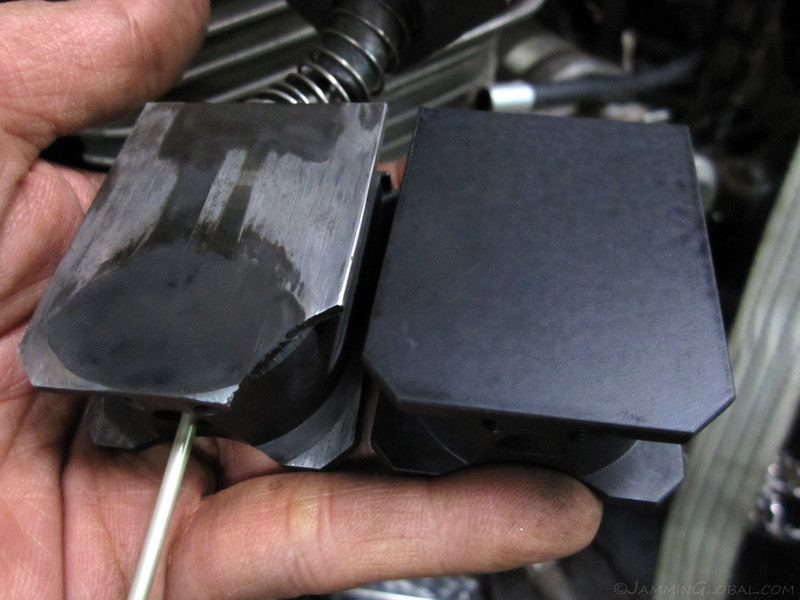 We opened up the carb and noticed that the old slide had a crack in one corner. It was on the engine side, so it wasn’t affecting the bike that much but it was probably a sign that this part was ageing. New slide got installed along with other parts for the carb, such as float pin, air speed screw, etc. Milan reseated my float needle and now the carb doesn’t leak fuel if the petcock is left open for a bit.

The cylinder head installed on the engine with new brass inserts for the spark plug threads.

sanDRina got treated to some proper motorcycle engine oil. Milan did an excellent job on the engine rebuild. Previously engine compression was at 105 psi and now it’s at 130 psi! 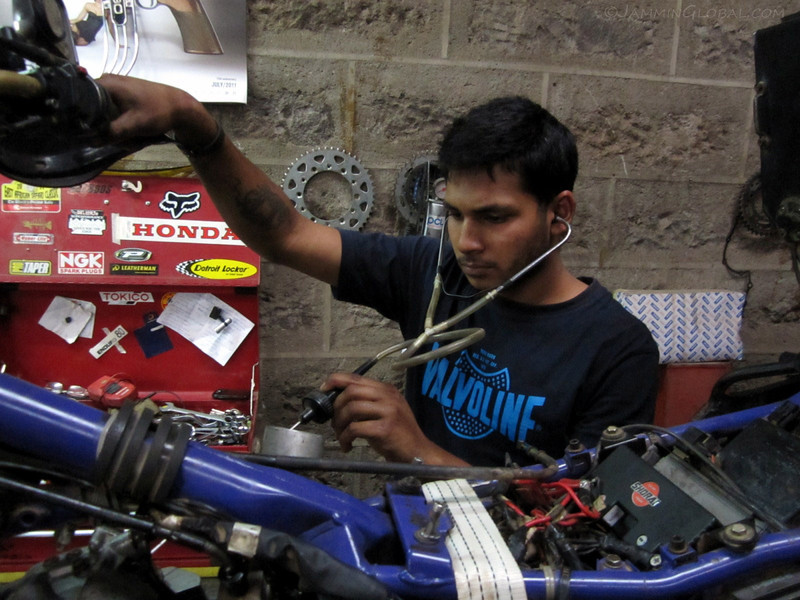 The bike doctor listening to the engine with a stethoscope during the first fire up to make sure that there were no unusual noises coming from the camshaft or the camchain. All sounded good.

A crack in the frame was noticed near the subframe joint. The crack probably happened from riding fast over the corrugations on the Lake Turkana route with my big Top Box on there.

Benefits of good ol’ steel frames: just weld her back together.

Painting the fenders after lots of cracks and chips. The color was matched but only glossy was available, not matte.

Fixing a dent in my right pannier from a fall in the sand along the Lake Turkana route. I also replaced all the pannier gaskets and pucks and the bolts were regreased with copper slip. 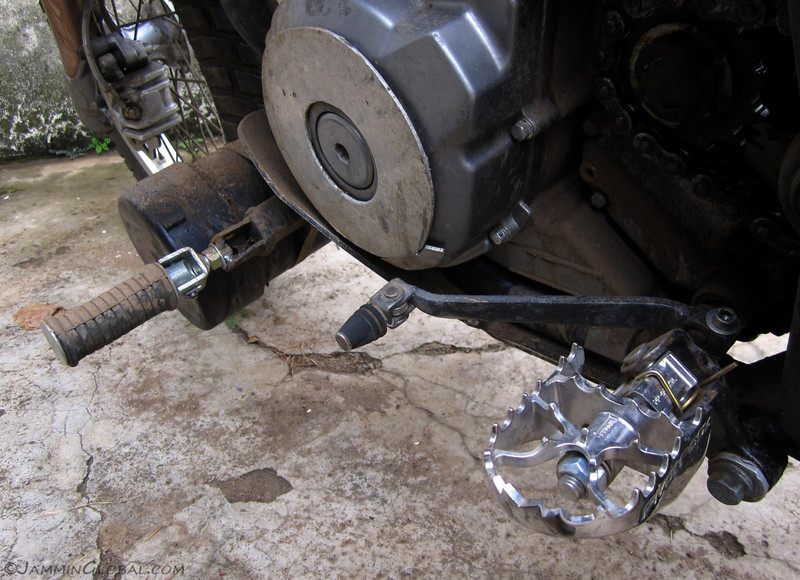 New Pivot Pegz Mk3 were installed. Allan Smith, the CEO of Pivot Pegz contacted me and wanted to send me a set. I also installed some new highway pegs, which also act as frame sliders.

Touratech GPS mount being replaced. Thanks for the sponsored replacement, Touratech USA! I gave the old one to Mike, the Dutch DR rider. 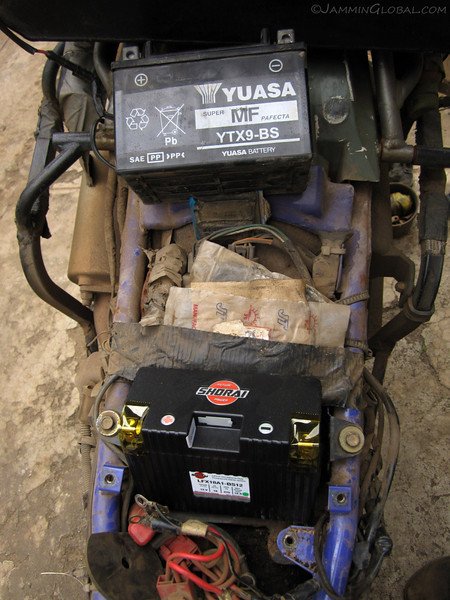 New Shorai Lithium-Iron battery going in, weighing less than half of the old Yuasa lead-acid one. 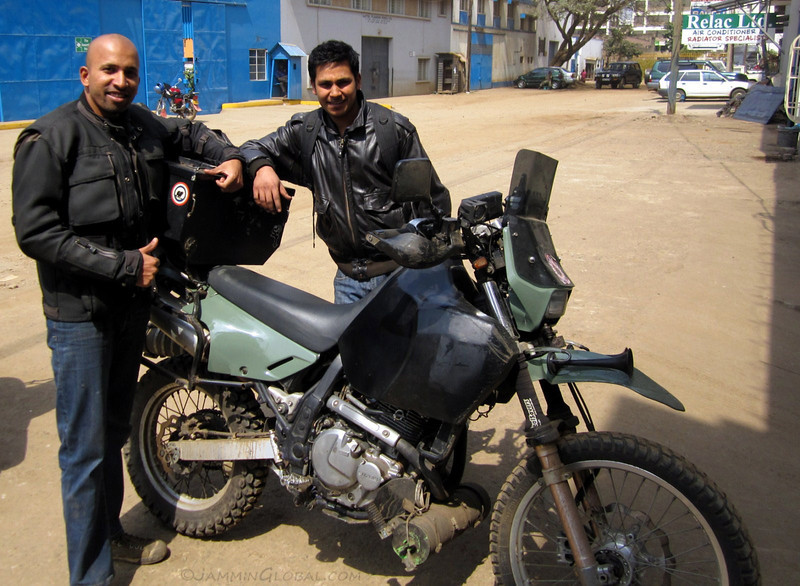 Thanks to Milan for all the fantastic work he did on sanDRina. She’s feeling like a new bike and should be good to go till India.

Previous: Kenya, Part 9: Back to Nairobi and Watamu Revisited

Getting ready to hit the road again and big thanks to Milan Shah for helping me out with sanDRina’s rebuild. We’ve been working on her for the past three weeks and she feels like a new bike now! Lots of major and minor things were done, such as: fitting new spark plug thread inserts on the engine, reconditioning the piston and rings, rebuilding the carburetor, replacing most of the bearings, installing a new rear wheel hub and spokes, installing a new air horn, fitting a new braking system, rebuilding the suspension, welding a crack in the frame, painting the fenders, fixing a loose exhaust, replacing rusted bolts, installing new highway pegs, mounting a new rear tire and giving her a thorough washing 😀 Big thanks also to my friends in Nairobi who acted as human couriers and brought me back tonnes of parts and gear from the US and the UK 🙂 Countdown to departure has started. Right now the plan is to leave Nairobi next week but that’s subject to change and pending my South African visa. Have to pack and close up my life in Nairobi this week…

I installed new Galfer Wave rotors on sanDRina with new organic brake pads this past weekend. Thanks to Galfer USA for supplying my DR650 with new braking power! Looks a bit too shiny on my dirty girl; where’s the nearest mud puddle? 😉