South of Uganda and sandwiched between DR Congo and Tanzania is one of the smallest countries in Africa. Rwanda, a hilly country blessed with fertile land, is currently stable and growing and exudes more development than its neighbors. But sadly, it can't shake off its turbulent history. In 1994 Rwanda plunged into its deepest and darkest moment in its history as an ethnic feud between Hutus and Tutsis, boiling and rumbling for 40 years, culminated in a genocide where the Hutu majority sought to eliminate the Tutsis. Peace has returned, but extremists on both sides haven't forgotten who the enemy is. The Tutsi-led government has sought to remove the labels of Hutus and Tutsis that were imposed on them by Belgian colonialists and is trying to create pride in a Rwandan identity.

I only spent a few days in this tiny country, but enjoyed a lovely off-road ride along the shores of Lake Kivu, one of the great African Rift Valley Lakes and then spent some time in the capital, Kigali, paying my respects to the victims of the genocide and getting a first-hand account from my CouchSurfing host.
_ 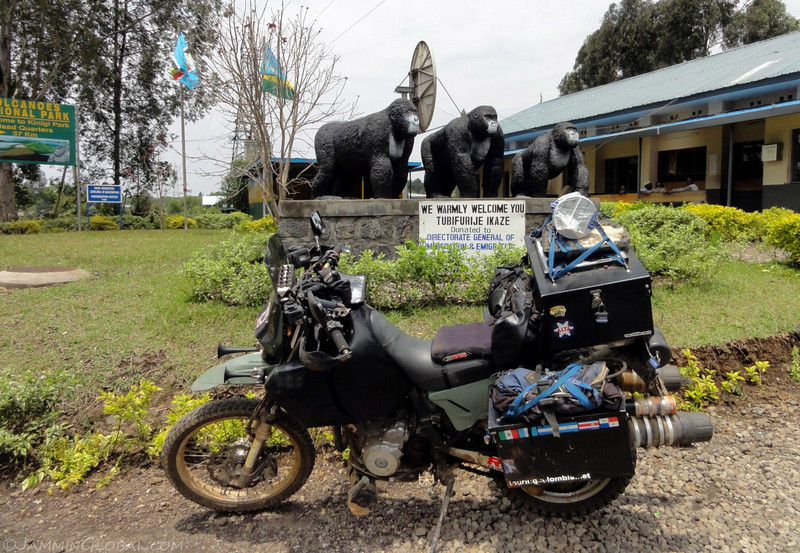 At the Cyanika border with Uganda and sanDRina posing with gorillas. This was as close as I was going to get to Rwanda's star attraction, the mountain gorillas on the Virunga volcano chain.

Rwandan Francs showing the country's main foreign exchange earner, gorilla tourism and coffee. Rwanda had close ties with France after independence and it shows in the name of its currency, the use of French in business and government circles and the practice of driving on the right, compared to most of its neighbors who drive on the left (following British influence). USD $1 = RWF 605, so that RWF 5000 note equals about $8.25.

One big difference that's evident as soon as entering the country from Uganda is how crowded it is. Rwanda has one of the highest population densities in Africa, with about 12 million people crammed into an area the size of Maryland. And with the capital, Kigali, having only about a million residents, the rest are scattered throughout the country and there was hardly a stretch of road with no Rwandans on it. As soon as I stopped for a water break, an audience gathered around, reminding me of Ethiopia. 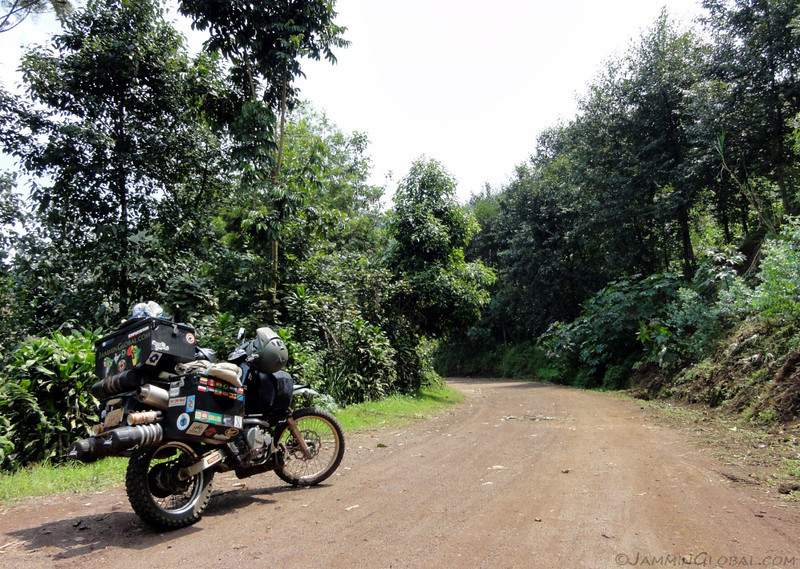 I found some tranquility in this crowded country on the gravel road that follows the coast of Lake Kivu in the west.

A wide view of a terraced tea estate along the route by Lake Kivu. Although it was sad to me that this once-forested land has been cleared for agriculture, the endless greenery was soothing and rejuvenating.
Click here to see the high resolution version.

I could only stop for photos on the flat surfaces but the route was very hilly and most of it was covered in exposed rocks with sanDRina bouncing along under my throttling.

These kids ran up the hillside as soon as they heard my engine stop and just watched me from a distance. That GAP sweatshirt that you donated to the Salvation Army, it's here in Rwanda.

Getting a glimpse of Lake Kivu in the distance with DR Congo on the other side.

I arrived in the lovely lakeside town of Kibuye and got right up close to the lake that I'd been following all afternoon.

My corner room at Home St Jean, a hotel attached to a mission, with a panoramic view of Lake Kivu and its mountainous shoreline.
Click here to see the high resolution version. 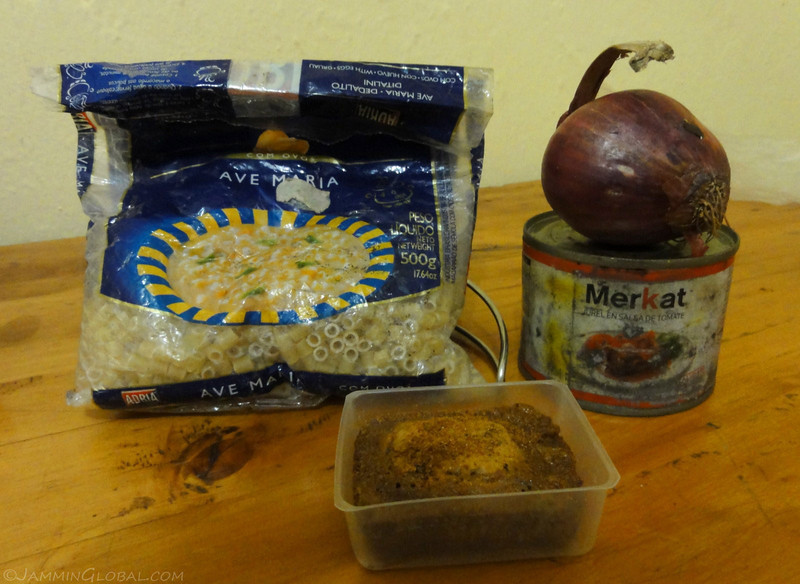 Food was expensive at the hotel and I had an onion to finish, so I made a meal of pasta and fish flavored with some dehydrated miso soup and the onion. I'm such a pack rat; that bag of pasta has been with me since Bolivia! That's about two years ago. And that can of fish has been with me since Chile. I was saving it for some reason and finally used it up.

A cloudy sunrise over Lake Kivu, one of the deepest lakes in the world at 480 m (1,575 ft). It's basically a flooded rift valley with the crust slowly pulling apart at its base and releasing toxic chemicals into the water. Below a depth of 300 m (984 ft) is trapped methane and carbon dioxide gas, just waiting to be released to the surface in what is known as a lake overturn, an explosion of gas from deep underneath. After the sudden carbon dioxide release by Lake Nyos in Cameroon, awareness of these deadly lakes has grown. But until the next unpredictable explosion, the government is trying to mine the methane gas for electricity generation and maybe even export it to its neighbors. 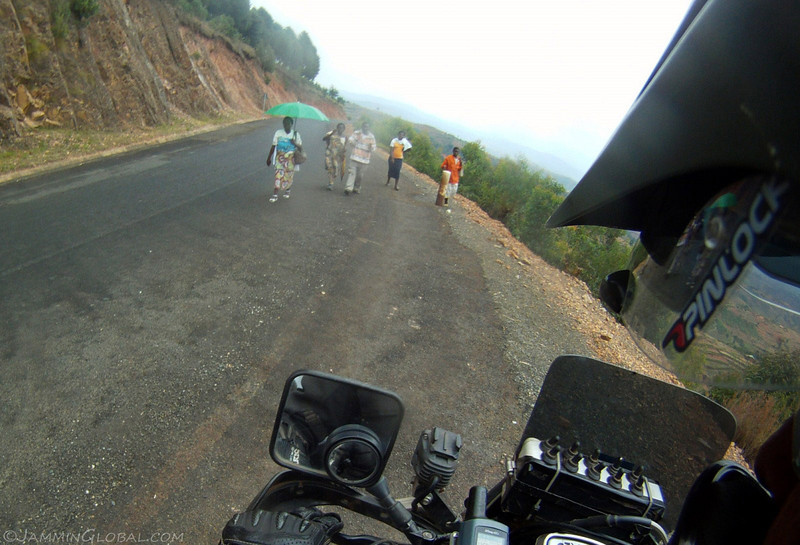 On my way to Kigali with Rwandans all over the road. It was surprising to see so many well-dressed people walking very far from towns. I'm not sure if the buses are too expensive or are infrequent or whether Rwandans just love to walk.

A panorama of the endless hills of Rwanda and most of them terraced for farming.
Click here to see the high resolution version.

At the Genocide Memorial Center in Kigali. It was a heavy experience to read and hear about how the situation built up and lead to this horrific event. However, it was encouraging to see how the reconciliation process took place with the use of a participatory justice system known as gacaca courts. Convicted genocidairies were given reduced sentences if they admitted their guilt in public, usually in the towns and villages that they killed people from. 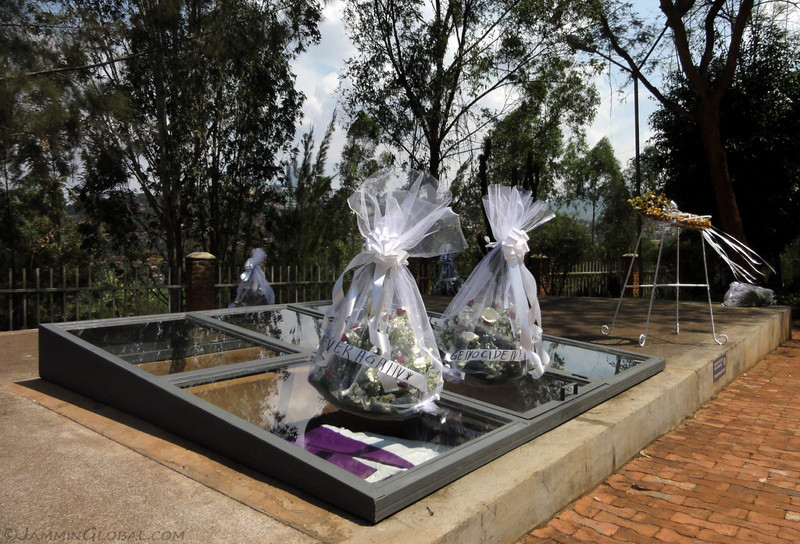 The memorial is built on a site where 250,000 victims are buried in a series of mass graves. That's about one quarter of the total number of people that lost their lives in this dark moment in humanity's history. 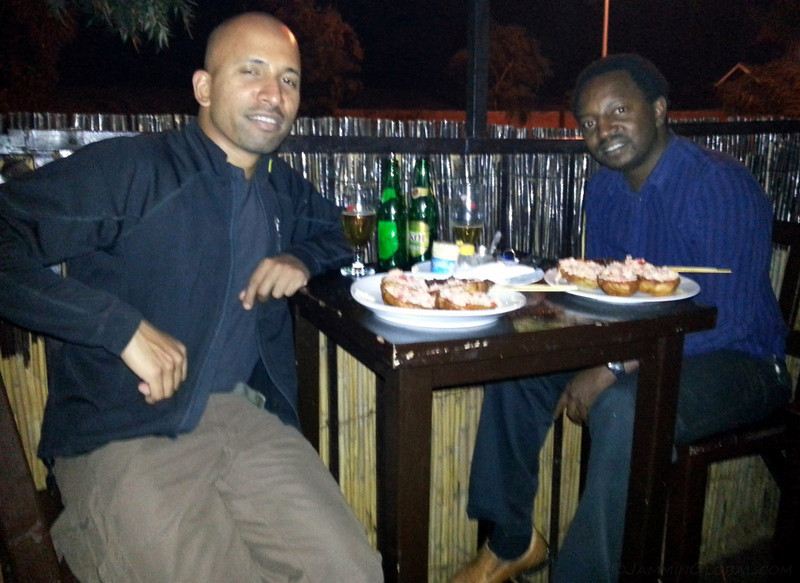 Having dinner with my CouchSurfing host, Jean Paul. He's an HIV/AIDs medical researcher and in fact is the lead person in Rwanda for all things related to HIV/AIDS. He was flying out in a few weeks to Chennai, my home city, for a Commonwealth medical conference. Yeah, Rwanda is a Francophone country that's also part of the Commonwealth. JP recounted the events in his life during the genocide and the confusion that arose about whether his family was safe and who he could trust to get him from his mission school to his parent's hometown when the violence broke out.

Riding the rolling hills of eastern Rwanda as I headed for the border with Tanzania.
Click here to see the high resolution version.
_
I spent only a few days in this small country but got a taste for its beautiful countryside and learned a bit more about the tragic events that have shaped this country's history.

Next: Tanzania, Part 1: Down the Western side and Bike Problems