With a sandy desert all along the border between Egypt and Sudan, it’s ironic that the only way to cross between these two countries is a ferry ride on the long Lake Nasser. Heading down the eastern side of Africa, this is the only route-hurdle that overlanders need to plan for, mainly because the ferry only runs once a week and also because there are limited spaces for vehicles, but no problems for motorcycles. The ferry runs from Aswan, the southernmost city in Egypt, along the 550 kms (340 mi) of Lake Nasser to Wadi Halfa, the first town after crossing into Sudan.

The journey was enjoyable, as besides sharing stories with other travelers, I also spent some time with passengers who were traveling for more serious reasons, such as finding work, moving back home after the Libyan war had started or to visit family. The travel was very smooth as the lake was still, which made for some beautiful photographs. 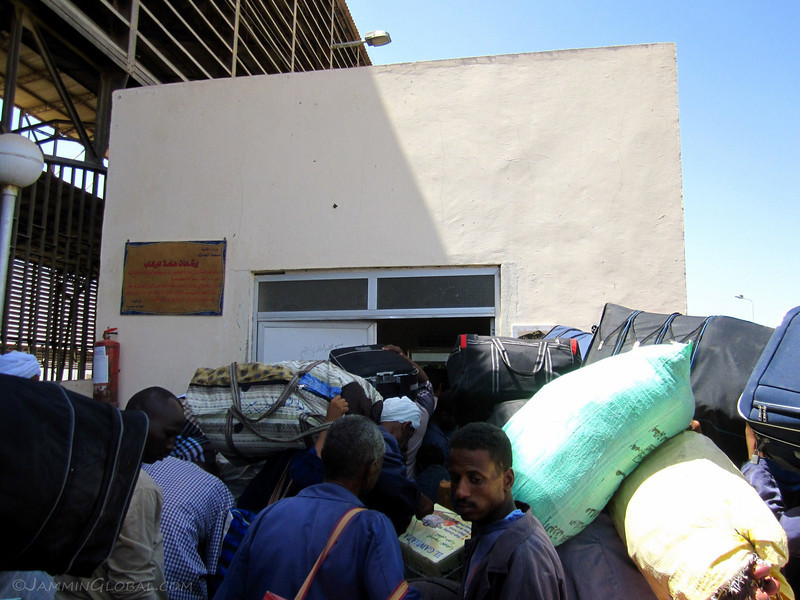 On the morning of the journey, this is what the security screening was like. It was a horde of passengers, all pushing and shoving to get their luggage and themselves through the x-ray scan. The ferry leaves around 5 in the afternoon, but everyone is there by 9. Besides getting through security, there is passport control and the most important task: claiming a good spot on the deck of the boat.

Our fabulous vessel for crossing Lake Nasser, the Sagalnaam. It probably wouldn’t pass a safety inspection in the west, but it’s been happily plying these waters for years. The round windows are the second-class floor with the first-class cabins on top of them and third-class on the roof! The cheapest fare cost LE 322 ($59) and first-class went for around LE 520 ($95). 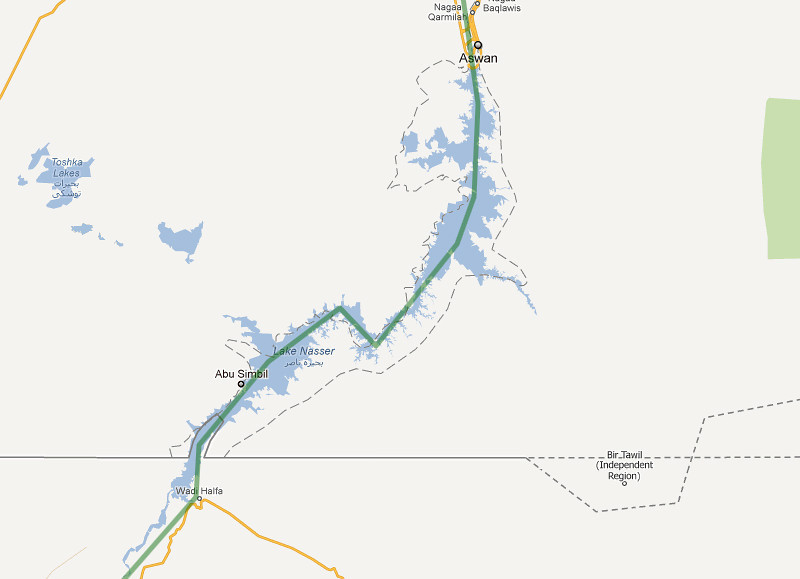 The route of the ferry ride from Aswan to Wadi Halfa. There has been talk of opening a land border crossing between Egypt and Sudan, but it is yet to materialize. There’s a highway on the coast but it’s only open to commercial traffic, for now. But, it’s also a boon that we have to travel by this ferry, as it harks back to the old days when traveling wasn’t as independent and easy as it is nowadays. 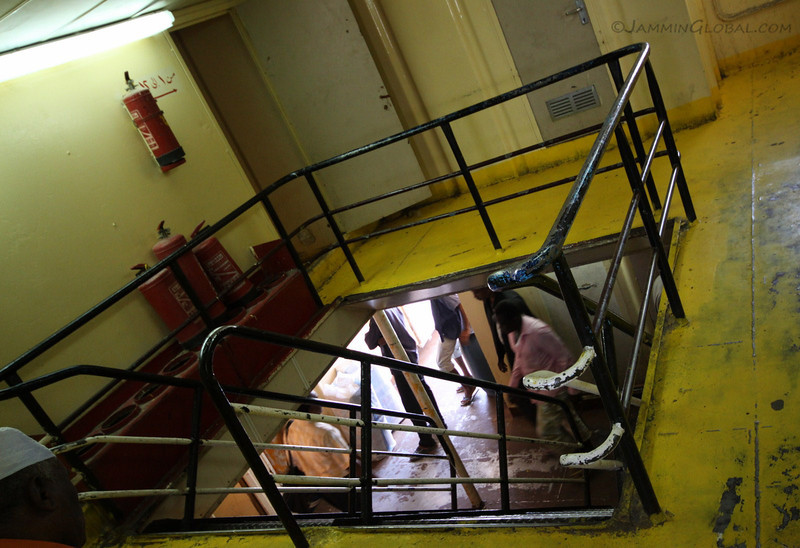 Inside the Sagalnaam, looking down the stairs from the first-class floor to the second-class floor as passengers started to board.

A first-class cabin with all the amenities of a bed, A/C and privacy. Nothing more. 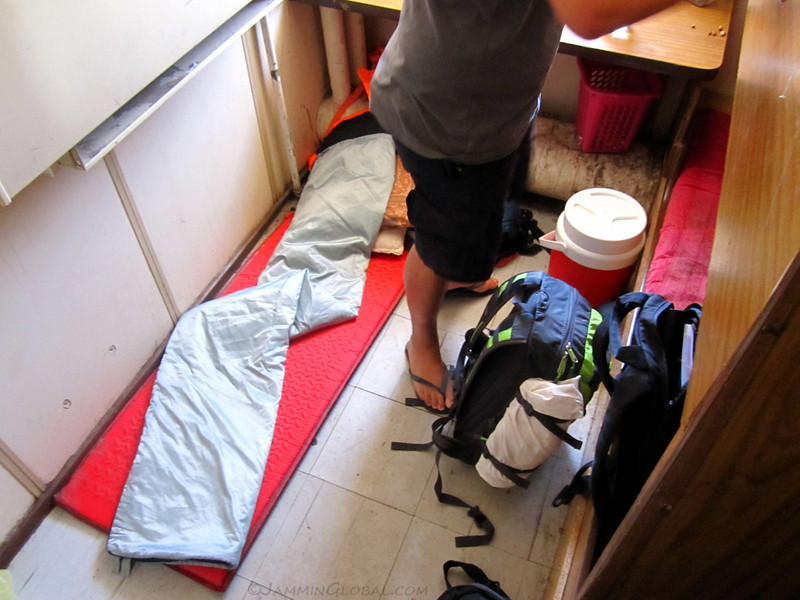 I was traveling on this ferry with six other overlanders and two of them, Ben and Edward, had booked a first-class cabin. As I was engaged in some deep philosophical and political conversation with Ben, he invited me to just put my sleeping pad down and enjoy the A/C. I spent the heat of the day inside, but enjoyed the evening out on deck. 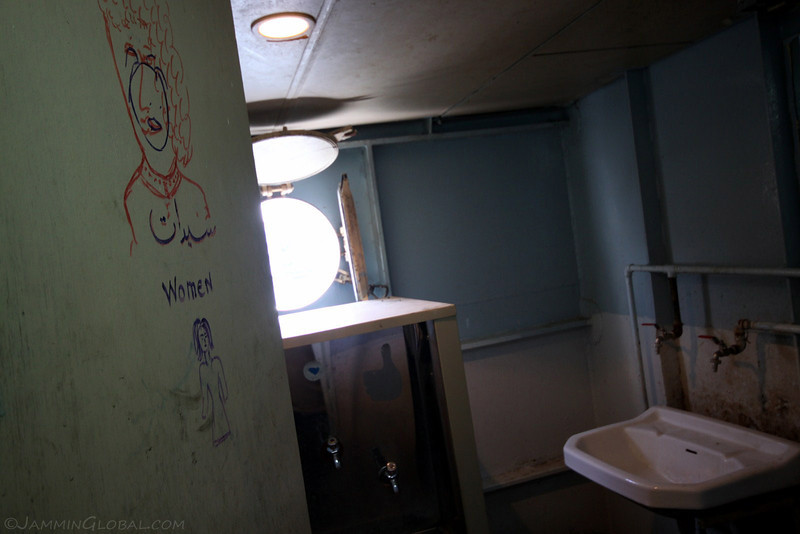 Communal bathrooms on board, which deteriorated even before we left Aswan. No fair, ladies bathrooms are always fancier than the gents; this one had a water cooler inside. 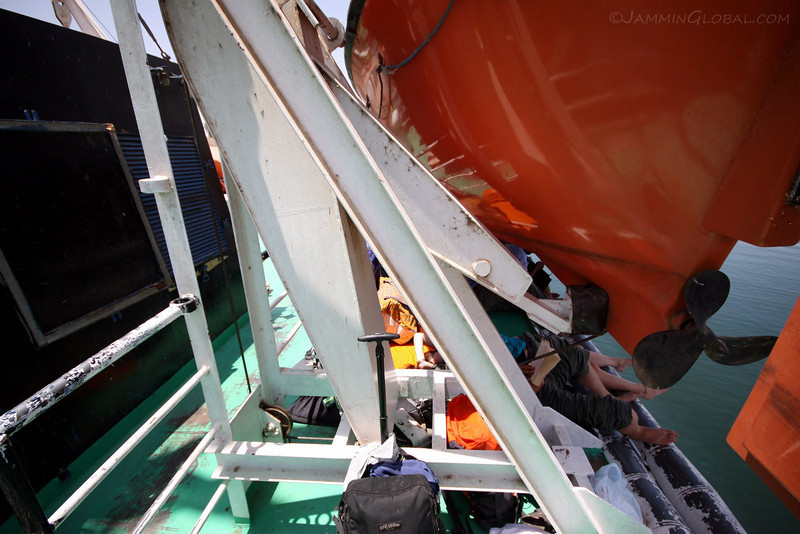 Out on deck and making sure Guy and Lu claimed a good spot under a lifeboat. The majority of passengers weren’t on board, yet. 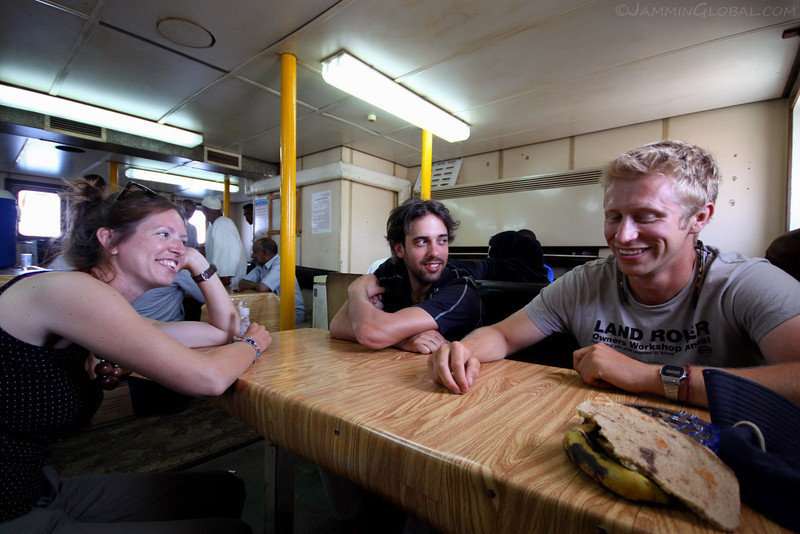 In the first-class dining room with Lu, Edward and Guy. Being fair-skinned, it was easy for these third-class travelers to walk into the first-class dining room and cool down with the A/C. All other darker-skinned passengers had to show their ticket to enter. And I, being brown, and passing for an Egyptian or a Sudanese, had to make sure I looked like I belonged in first-class; SLR camera slung around my neck did the trick. 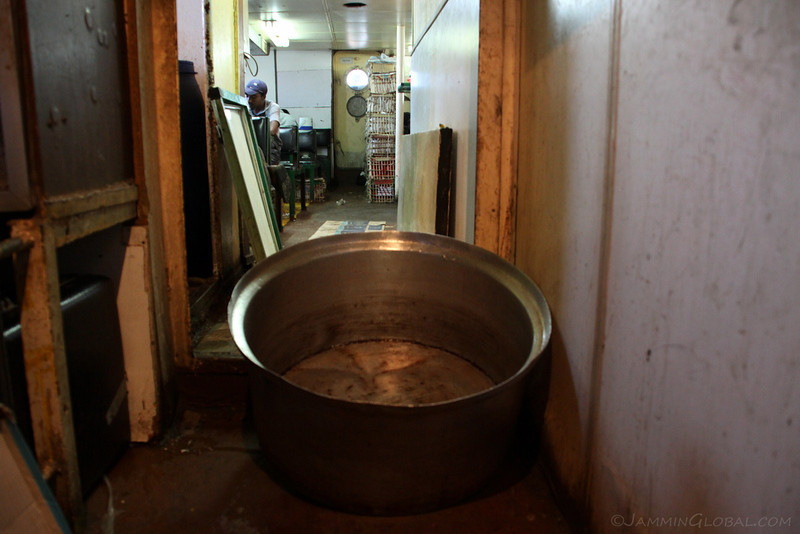 Our tickets came with one meal voucher and we all decided to have it for lunch and spend the heat of the day indoors, so that we could enjoy the cool evening out on deck, when we were underway. 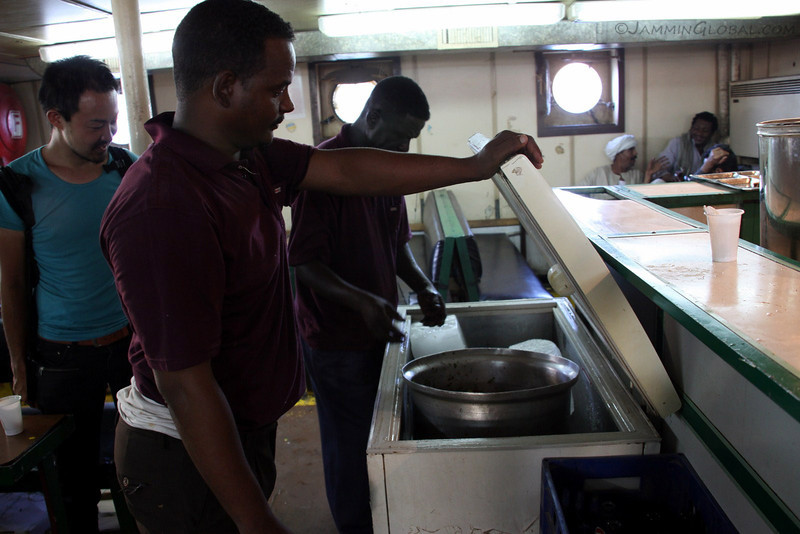 Food being stored in fridges with huge ice blocks in the second-class dining room. And that’s Takeshi looking on. He’s from Japan and is backpacking down to South Africa.

After lunch, I walked around the port and noted the myriad of barges, freighters and cruise ships, all tied up with nowhere to go. 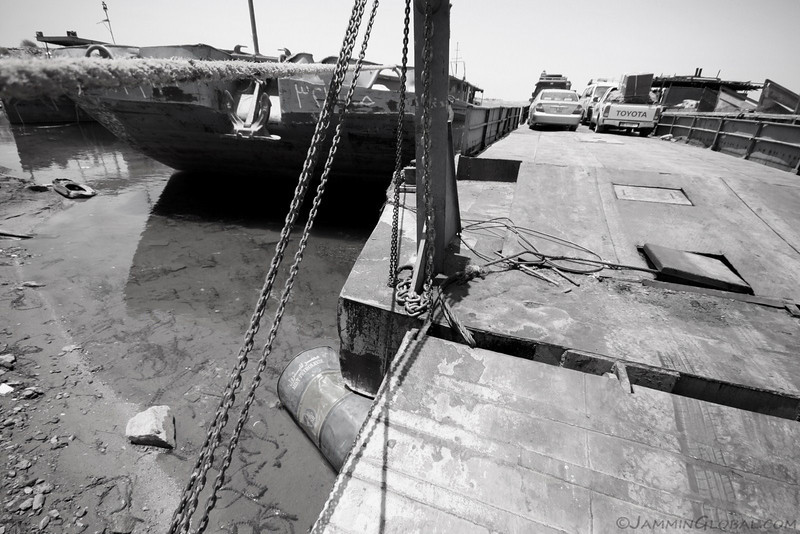 I had a look at sanDRina and the vehicles on the barge, which hadn’t left it. The vehicle barge usually arrives a day or two later than the passenger ferry at the other end as it’s not sophisticated enough to have radar and thus can’t navigate at night. 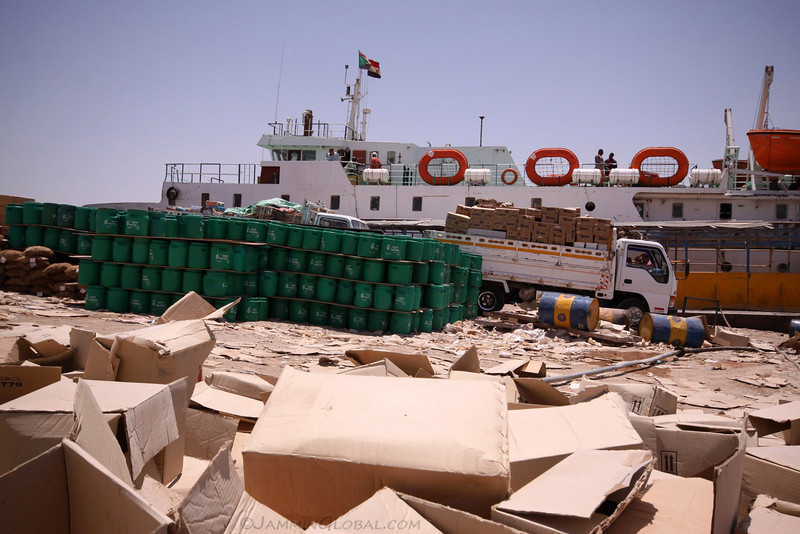 Besides passengers and their vehicles, this ferry and its barges provide a crucial trade link between Egypt and northern Sudan. Due to strict economic sanctions imposed on Sudan (due to its president’s handling of the Darfur situation), most goods are expensive there. But it’s still cheaper to import from Egypt, than buying locally. 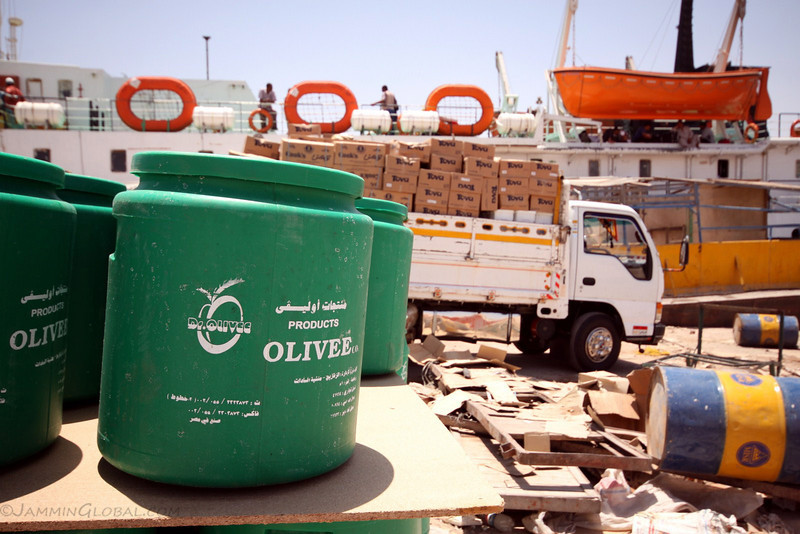 Olive oil, by the buckets, being transported from Egypt to Sudan. Food and agricultural products are relatively cheap in Egypt, due to extensive irrigation, brought on by the Aswan Dam and Lake Nasser. 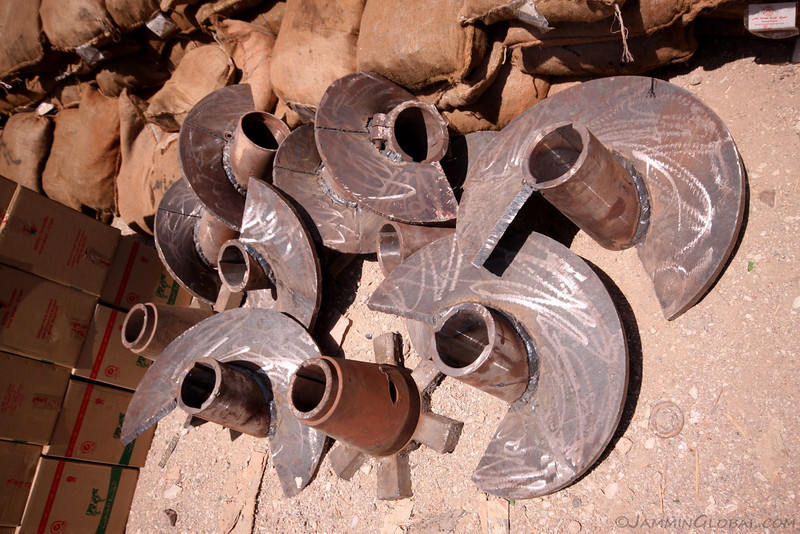 Industrial products, such as these augers, waiting to board their ride to Sudan. 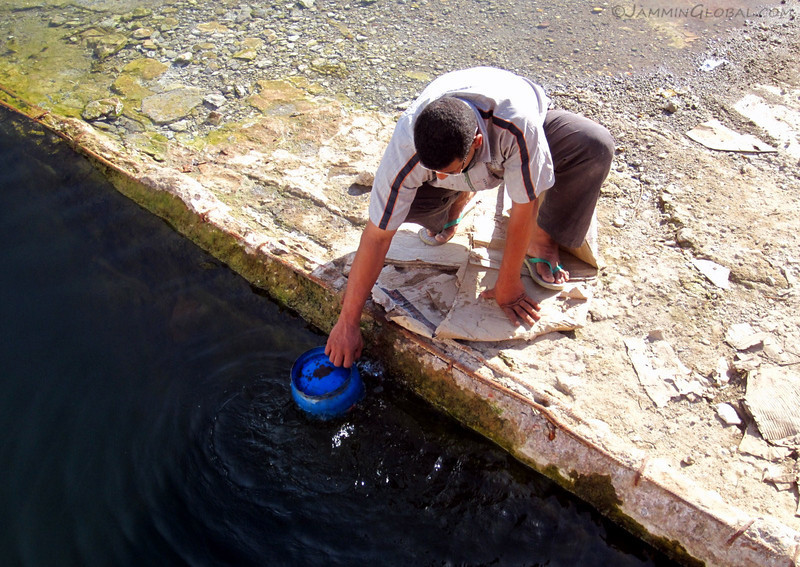 This gas cylinder was taken off the ship as it had sprung a leak and was being submerged to contain the gas underwater. Could there be more on board? You can’t worry about things like this in Africa. It happens. 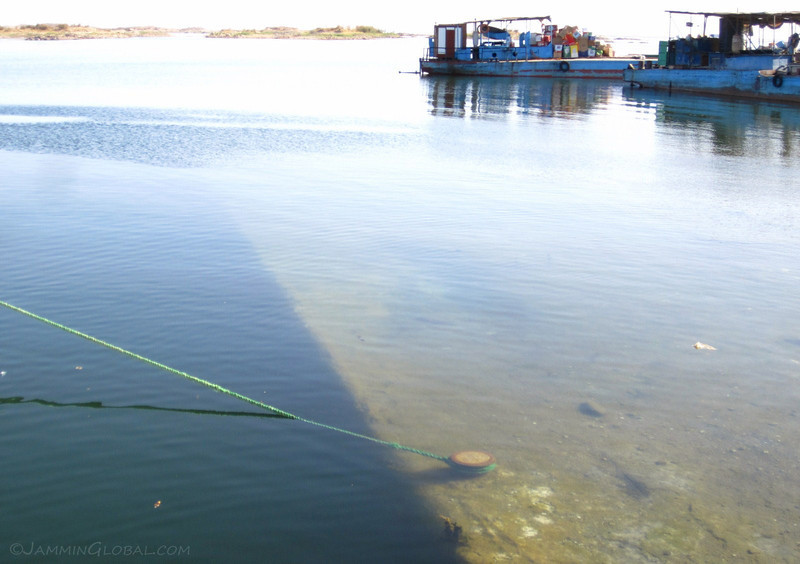 The sloping pier, extending far into the waters of Lake Nasser. The reservoir’s height changes over the years depending on whether the Nile south of here is in flood or not and thus this kind of pier is always usable. 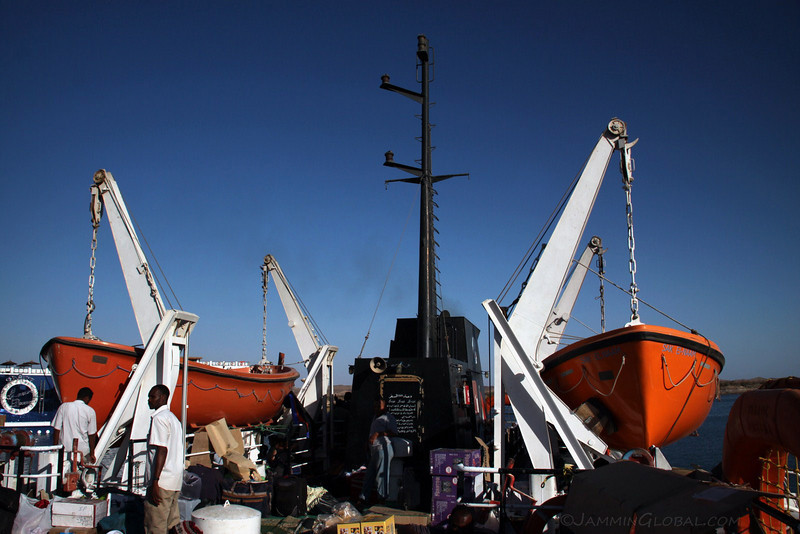 On deck, as anticipation was building for departure near 5 pm. The engine fired up and all the passengers were on board. 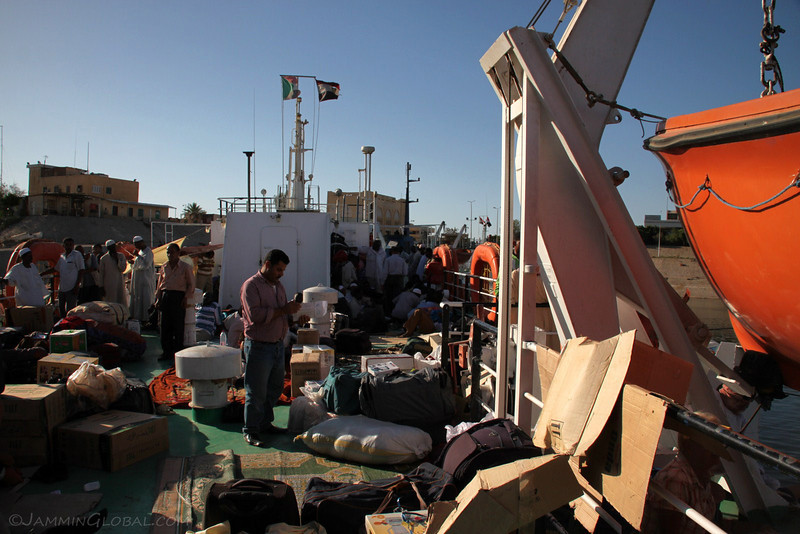 The travelers on third-class had all staked their claim on the deck and there was very little space to walk around now. The ship’s mast was flying the flags of Egypt and Sudan.

For those passengers who missed out on the premium spots under the lifeboats, shelters were erected with cardboard and bed sheets.

A cargo barge departing from Aswan. 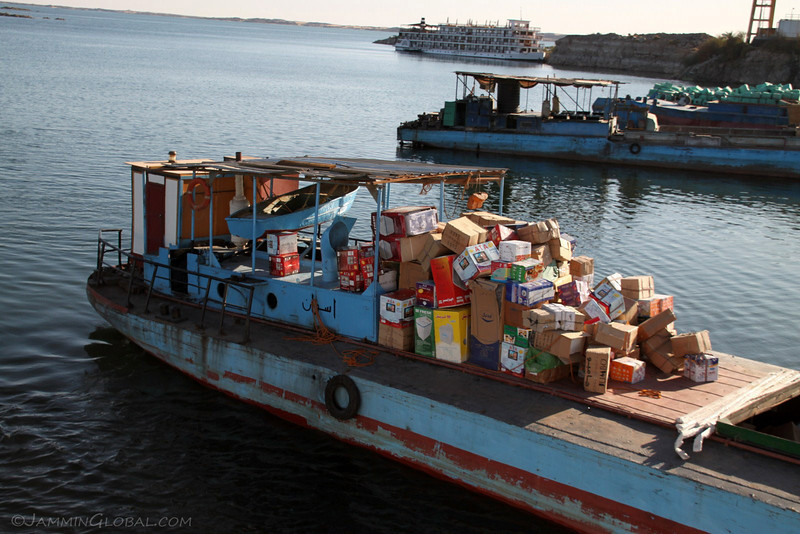 No guarantee that your cargo will make it to Wadi Halfa. But the lake is super smooth, so no need to secure anything. I was glad our vehicle barge at least had a side wall. Egypt is a lot more industrialized than Sudan, making for cheaper appliances and people were transporting fridges, washing machines, televisions, microwave ovens, food processors, etc. 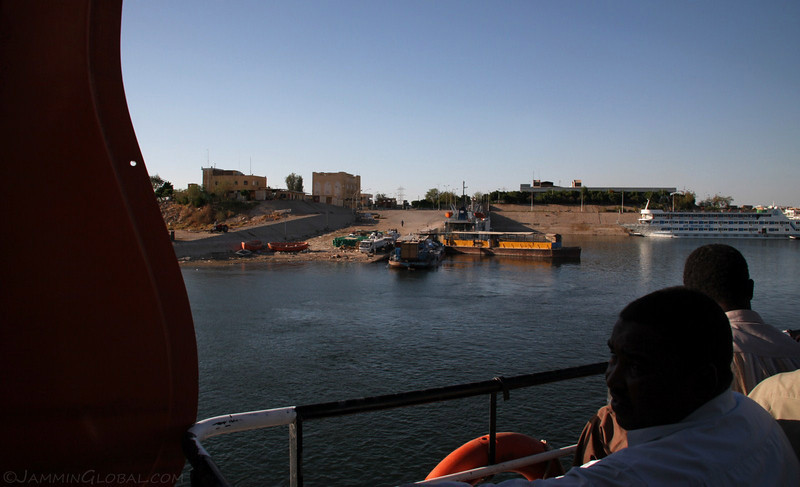 And we’re off! Goodbye, Egypt. It’s been great, but time for a new country.

Takeshi, happy to be underway to Sudan.

All smiles under the lifeboat.

A few meters off shore and we had a good view of the Lotus Flower monument on the crest of the Aswan Dam. It signifies Arab-Soviet friendship as the USSR gave Egypt a loan of over a billion dollars in the 1960s in order to construct this massive dam. The rulers of Egypt have always wanted to dam the Nile so that they could control its annual flood and ensure a stable water supply for irrigation. They finally managed that with this obstruction to nature. They also get lots of hydroelectric power, but hydro isn’t as green as it’s touted. Dams have a massive ecological footprint that surpasses all the positives that their constructors think will bring their societies. The gathering up of the Nile’s rich sediments behind this dam means a lot more chemical fertilizers are used now and those sediments not reaching the Mediterranean are affecting fish stocks there. 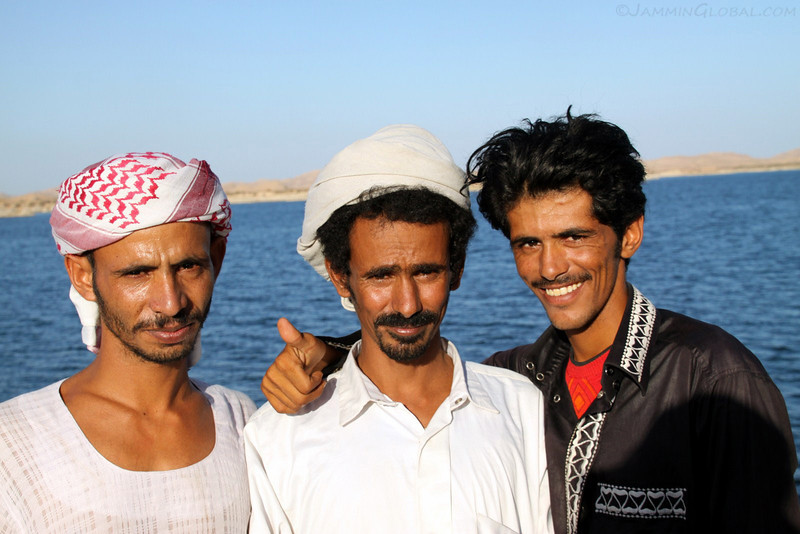 Three Sudanese men, happy to head home after a long stint in Libya. I managed to understand that they were casual laborers in the oil industry but it soon became too dangerous to hang around, waiting for peace to come, so a good time to visit the family.

As the Sun started to set on Lake Nasser, we entered that magic hour of light. 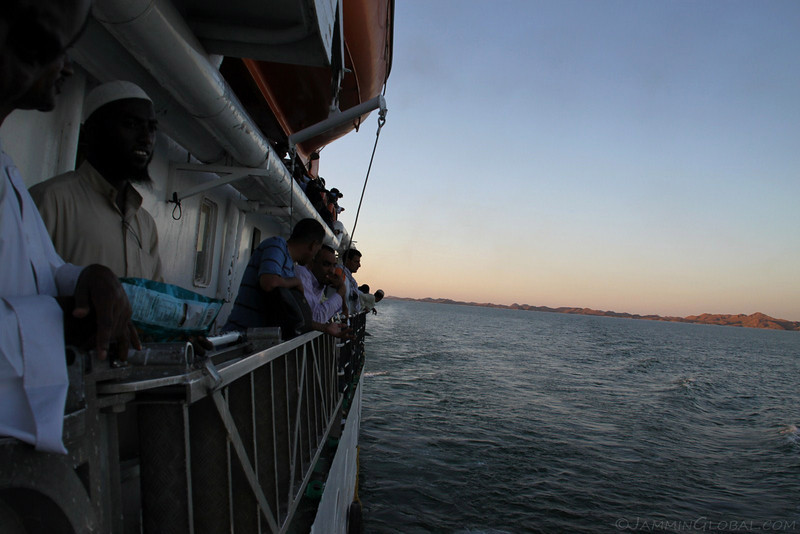 Passengers enjoying the ride and welcoming the sight of this huge expanse of water, surrounded by desert. 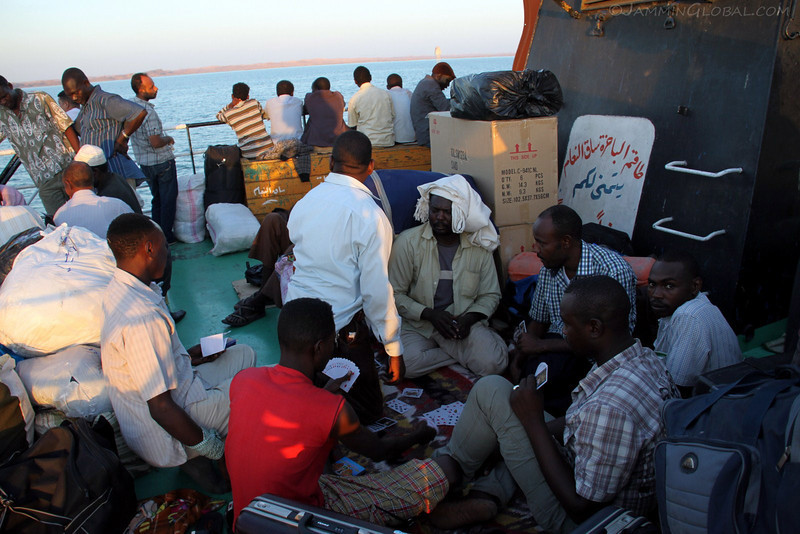 If the scenery wasn’t interesting, card games were going on. 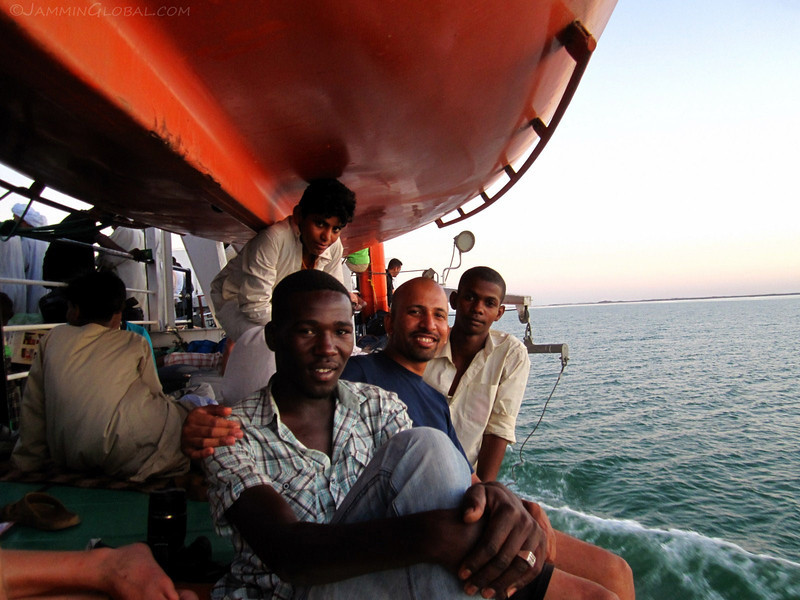 I was hanging out with these boys under the lifeboat, who all thought I was Sudanese, just like them, but maybe with a white mother? They wouldn’t believe me when I said, no, I was Indian and yes, both my parents are Indian. Skin color’s all relative – next to fair-skinned people, I’m dark and next to dark-skinned people, I’m fair. Browns FTW! 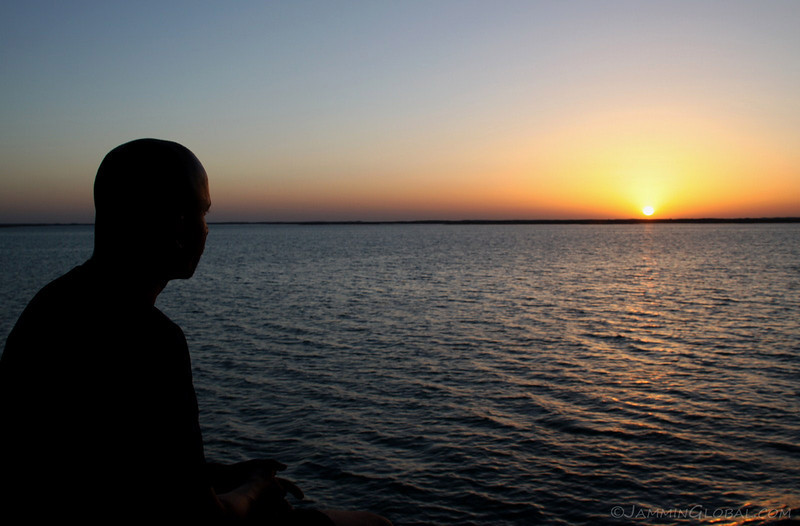 I never get tired of sunsets, especially ones over an expanse of water. 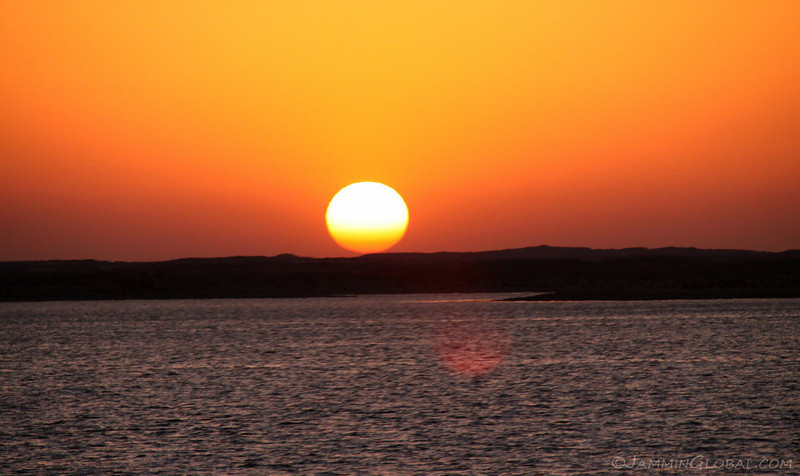 …quickly enters into the underworld.

Goodnight, home star. Hope you look just as spectacular to someone else at this moment as their sunrise. 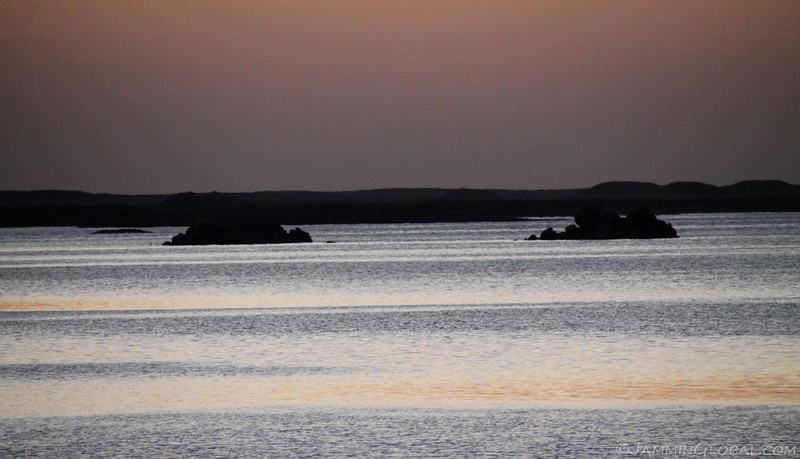 And now for twilight, my favorite time of day to shoot. The light from the just-set sun highlighting bands of still water compared to those with ripples. 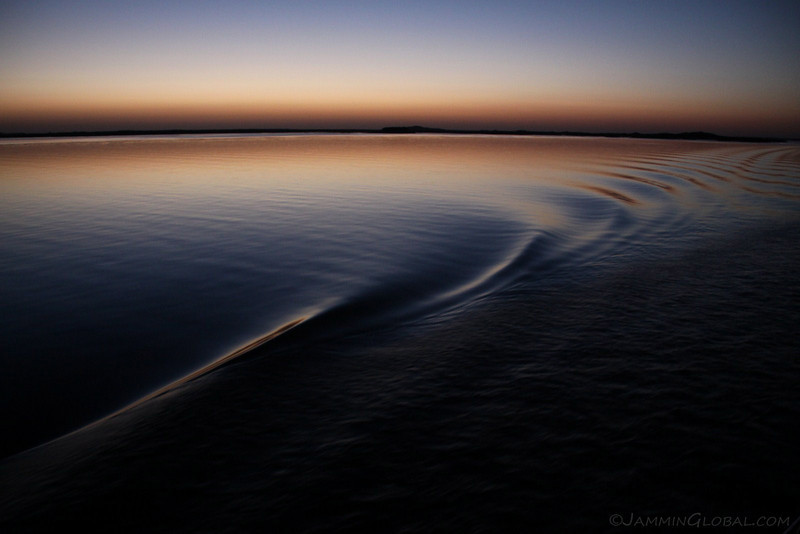 This be our beautiful Planet Earth. Looking west over the smooth-as-glass surface of Lake Nasser as the Sagalnaam disturbs with a harmonious wake.

The beauty of the mathematical precision of nature. Receding ripples catching up with proceeding ones and blending harmoniously on the surface of Lake Nasser. 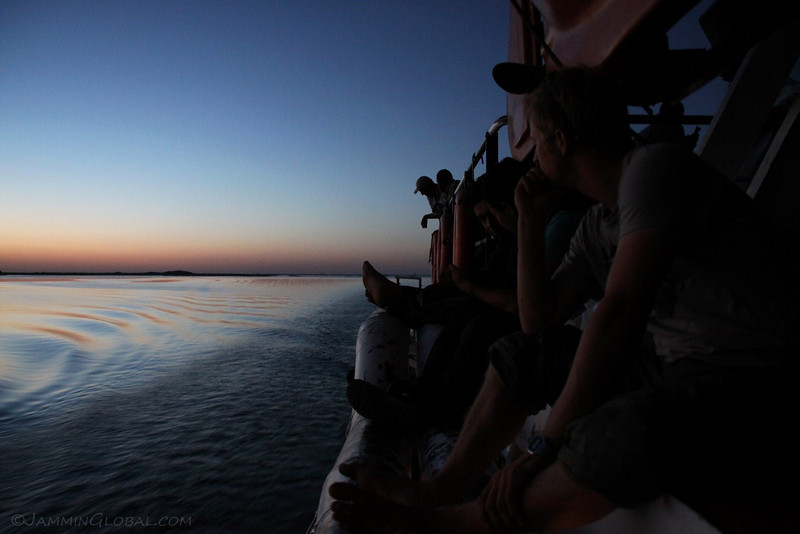 Guy, Takeshi and other passengers taking in the epic view just after sunset on Lake Nasser.

The moon came out as twilight started to fade to darkness.

A sharp crease as the Sagalnaam cuts through the still waters.

An hour after sunset, the stars were showing up in the west. It was the best I could do with a hand-held, long-exposure shot on a boat. 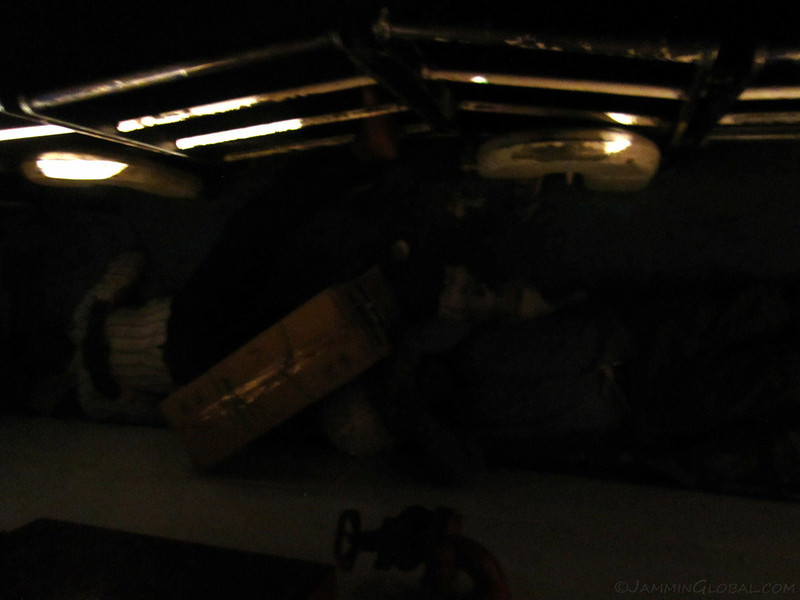 With nothing else to do and no light on deck, most passengers soon fell asleep, but I stayed awake and chatted with my fellow travelers, cherishing this special journey.

Morning twilight arrived around 5 am, highlighting submerged lands of the Nubian Desert. The smell of a new country was in the air.

The Sun was back with force, quickly heating up into a fireball.

Passengers on deck slowly roused from their slumber as the heat would become unbearable pretty soon.

The peacefulness of the journey aboard the Sagalnaam was coming to an end and would be contrasted with the madness of docking at Wadi Halfa in Sudan.

Crossing Lake Nasser from Aswan in Egypt to Wadi Halfa in Sudan is a wonderful journey, once the boat is underway, that is. I’m grateful that I got the chance to partake in some slow travel. The next time I jump on a plane and transport myself halfway around the world, I’ll spare a thought for all those who still travel with limited means.

I hope a land border doesn’t open up between Egypt and Sudan, so that future travelers can also experience this ferry ride in the desert. Because once a land border does open, most travelers would choose to avoid the hassles that traveling by this ferry brings, namely the paperwork and costs involved with transporting a vehicle over water, that too, to a new country.

I hope sanDRina had as pleasant a journey as I did…

Next: Sudan, Part 1: Wadi Halfa, Entrance to the Sudanese Sahara

Previous: Egypt, Part 14: Aswan, End of the Road in Egypt