As I made my way west across Zambia, I had come to my final destination of Livingstone. And here lies one of the greatest natural wonders of the world, Victoria Falls, the longest curtain of water in the world. I remembered coming here as a kid and as much as being a natural wonder visit, it was also a nostalgic visit. I stayed with an American rider friend who was part of a mission and he had been following my trip and saw that sanDRina had some serious cracks in her frame and offered to weld her up properly before I headed into Namibia. It also happened to be new years and I welcomed 2013 in style.

Pete had been following my ride report on ADVrider.com and invited me to come and stay at the camp he was part of for his mission duties in Zambia. They had a lovely property just south of Livingstone and being the low season for missionary visitors, I was put up in one of these tented cottages for a few days and the first thing I did was head over to... 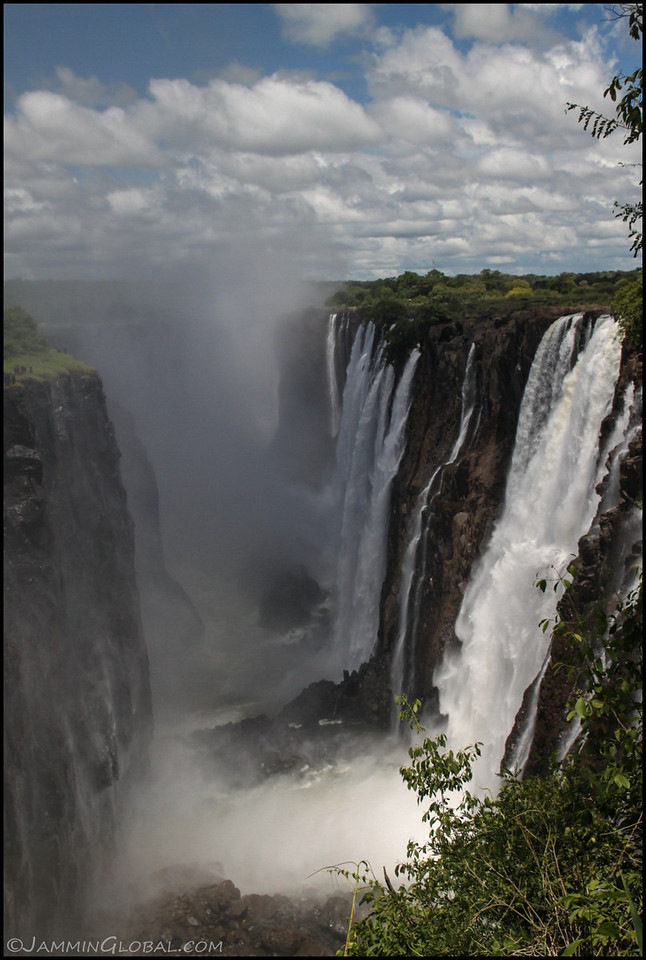 Victoria Falls! Wow, what a sight. It's also known by its indigenous name of Mosi-oa-Tunya, which in the Zambian language of Tonga translates to the Smoke that Thunders. In full flow (from February to May), the mist from the falls can be see from kilometers away and the rumble can be heard as it spreads over this generally flat land.

The thundering power of water.

It's not the highest (Angel Falls), widest (Iguazu Falls) or even fastest flowing (Niagara Falls) but Victoria Falls is considered the largest falls in the world. In full flow, the water flows over the edge in an uninterrupted sheet more than a mile across (1,708 m, 5,604 ft). I don't care much for comparisons as each mega falls is awe-inspiring on its own. There's something about being so close to massive amounts of water free-falling. Click here to see the high resolution version.

The Victoria Falls Bridge over the outlet gorge with Zambia on the left and Zimbabwe on the right. Good ol' Cecil Rhodes got the bridge built in 1905 to complete his epic Cairo to Cape Town railway and he wanted the train to pass under the mist of the falls as a delight for the passengers. Since then, tourists have been flocking to the falls from far away, except for about a decade in the 70s when Zimbabwe (called Rhodesia during that time) was fighting for her independence. 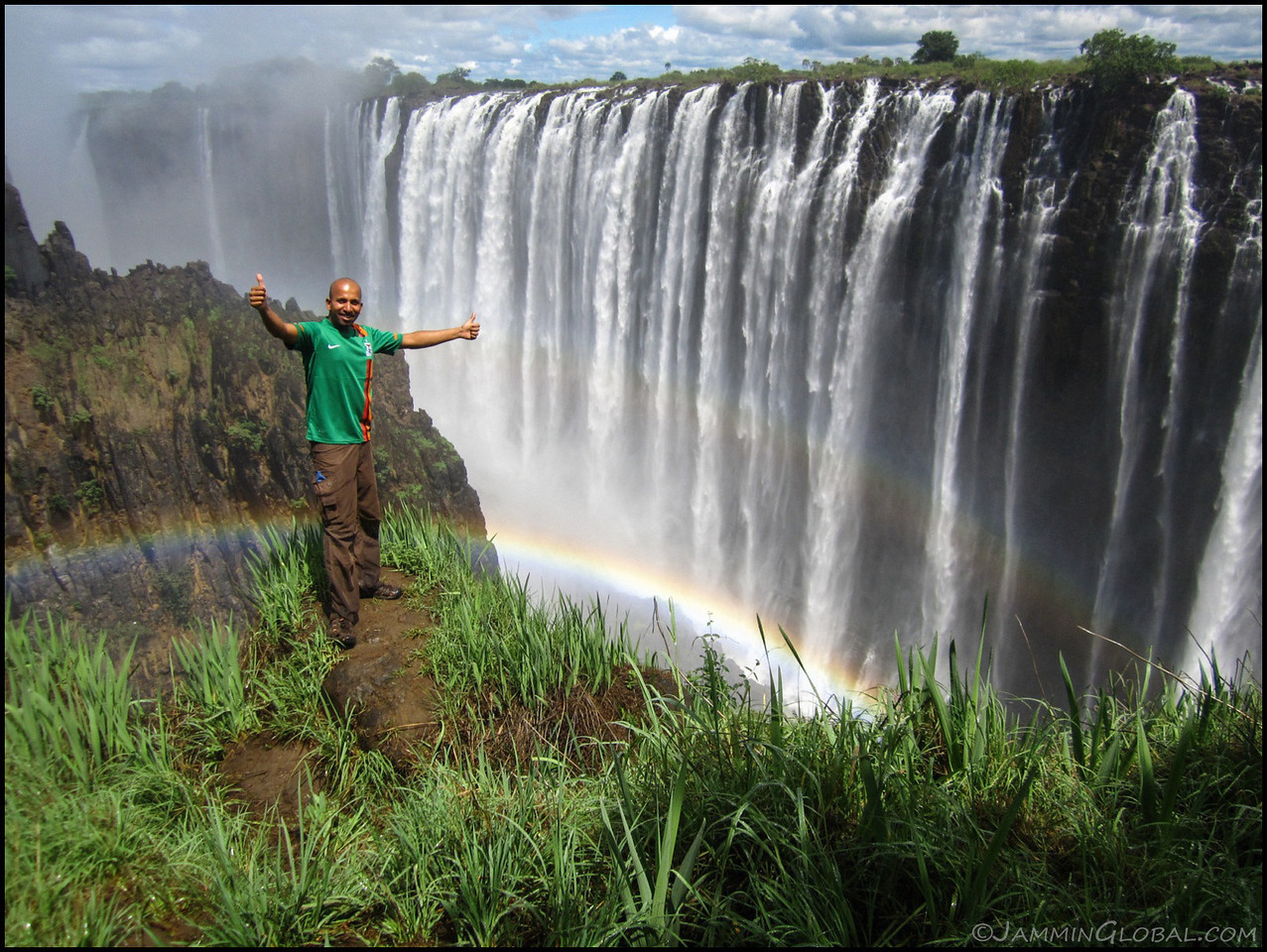 Happy New Year 2013 with a double rainbow! I'm wearing the football jersey of the Zambian team in the country's flag colors and felt proud to call this country home during my early years.

The Smoke that Thunders. The chasm is about a 100 m (330 ft) deep and the narrow gorge forces the spray high into the sky. In full flow, it's actually hard to even see the falls because the whole area is covered in mist. 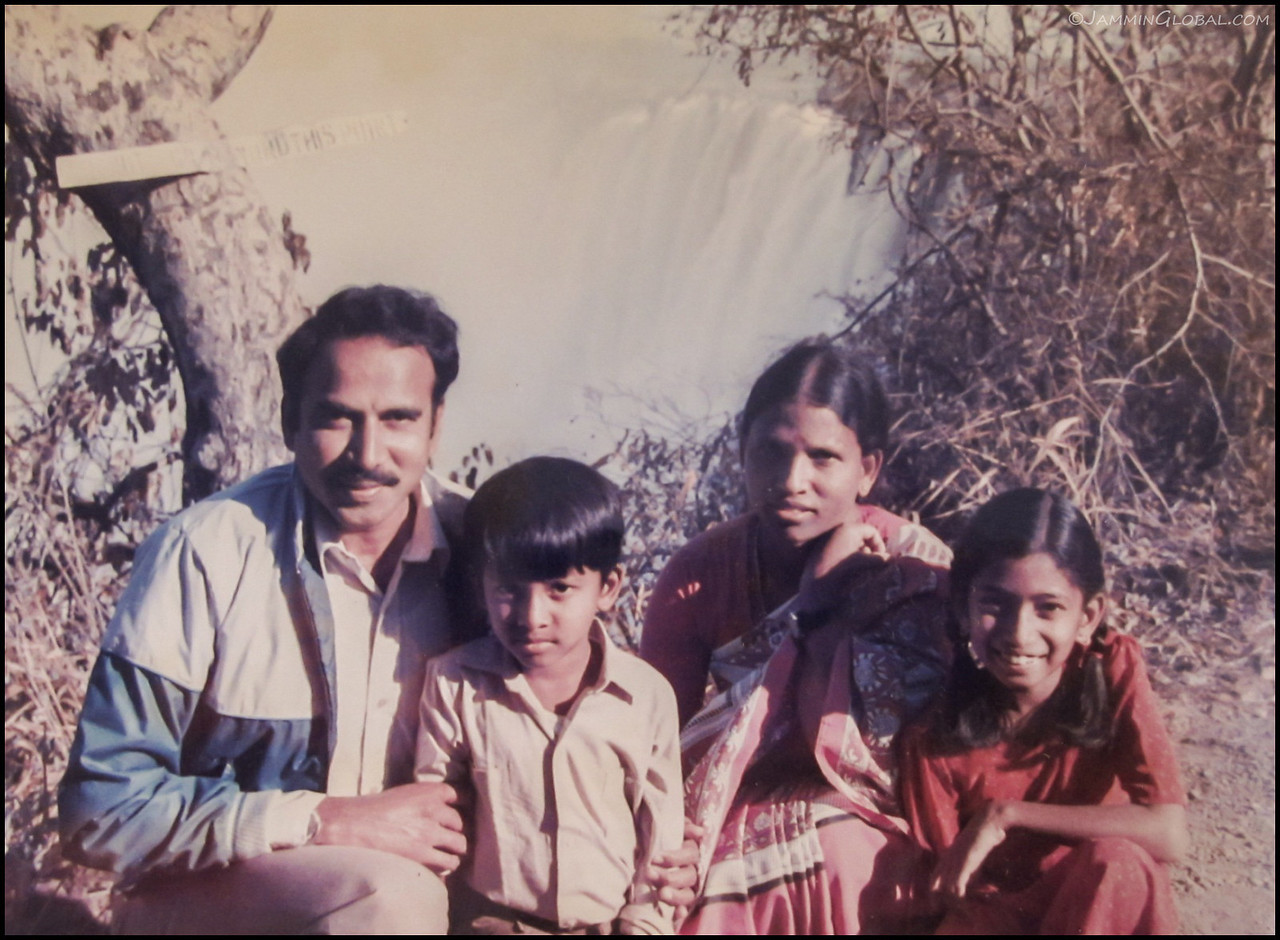 A flashback photo of my family at Victoria Falls, sometime in the early 80s. We lived on the other end of Zambia but managed to see the falls quite a few times. This looks like the start of the dry season with the falls in full flow. Yes, I had lots of hair when I was young.

Looking across Mosi-ao-Tunya from its eastern edge with rainbows all around. From an aerial view, it's clear that the falls have slowly been moving upstream over the eons. Just south of the falls are a series of diagonal canyons that show where the falls were at an earlier time. A new cut has started and in a few million years, the falls will be at a new gorge. It's humbling to realize the vast timescales that natural events take compared to our few decades on this planet. 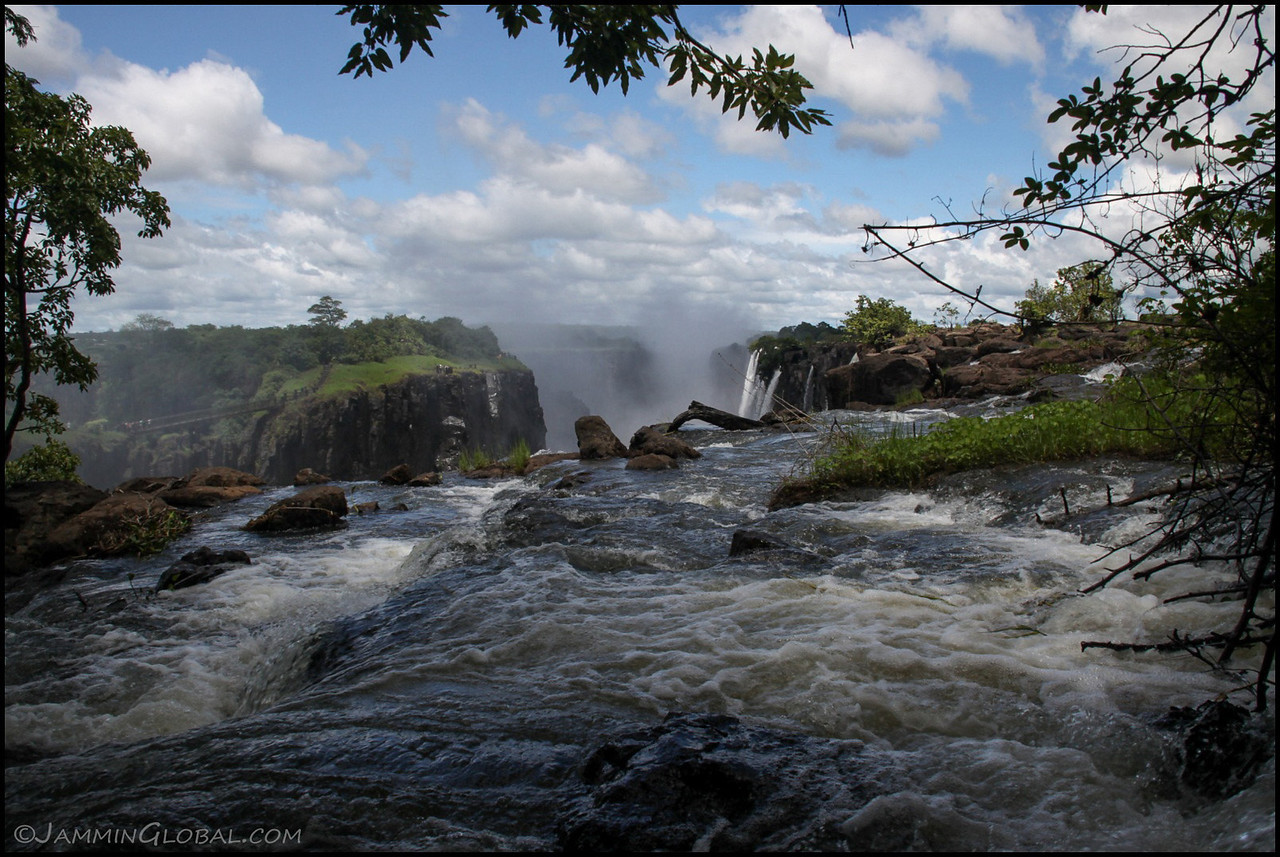 Enjoying a little lunch from the top of the falls. The Zambezi looks like any old river, just flowing aimlessly over the flat terrain upstream until suddenly the water comes across this massive cut in the earth and goes charging over the edge.

That evening, at the mission camp, they were celebrating New Years and I enjoyed my first proper American hamburger since probably when I left the States. 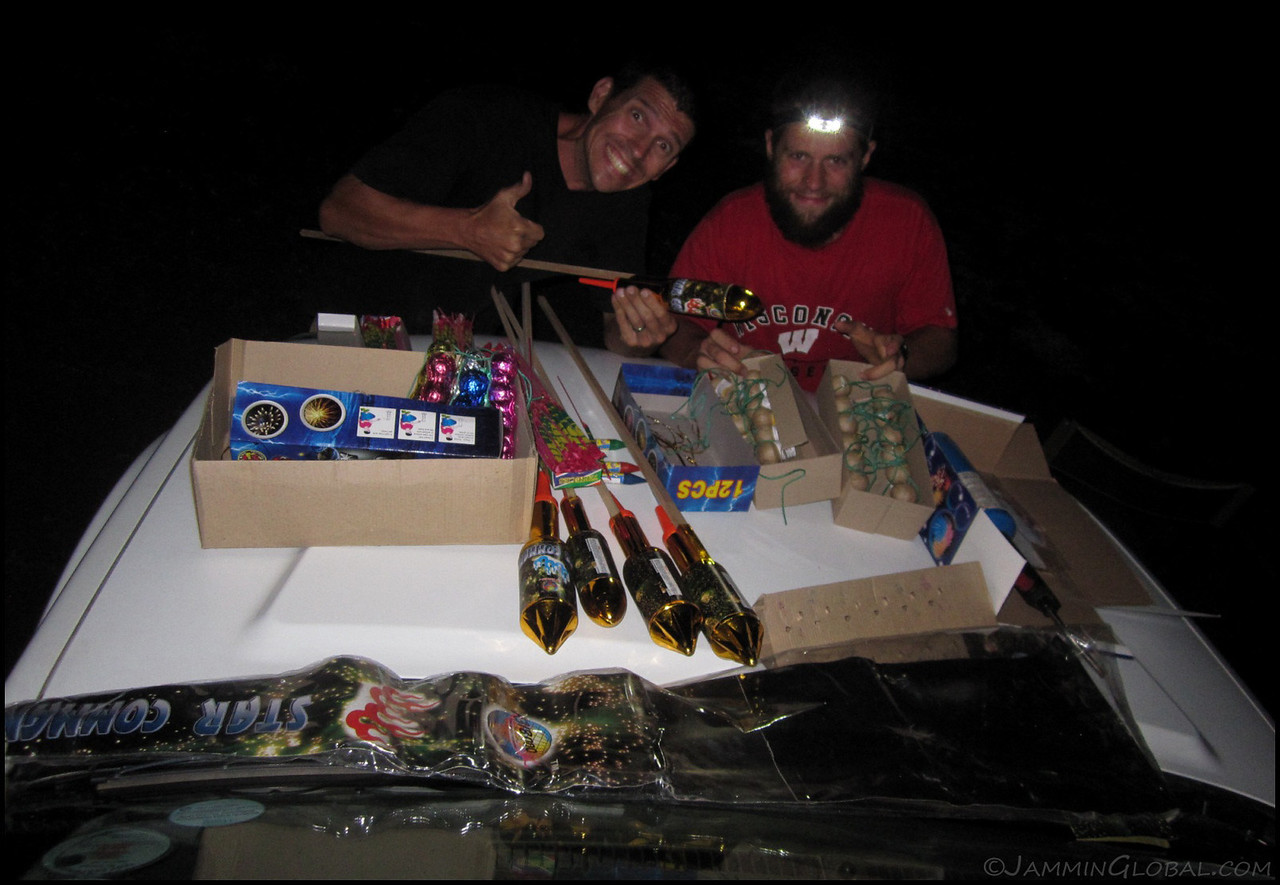 Dan and Pete with a stash of some epic fireworks. We rode out to one of the nearby villages and... 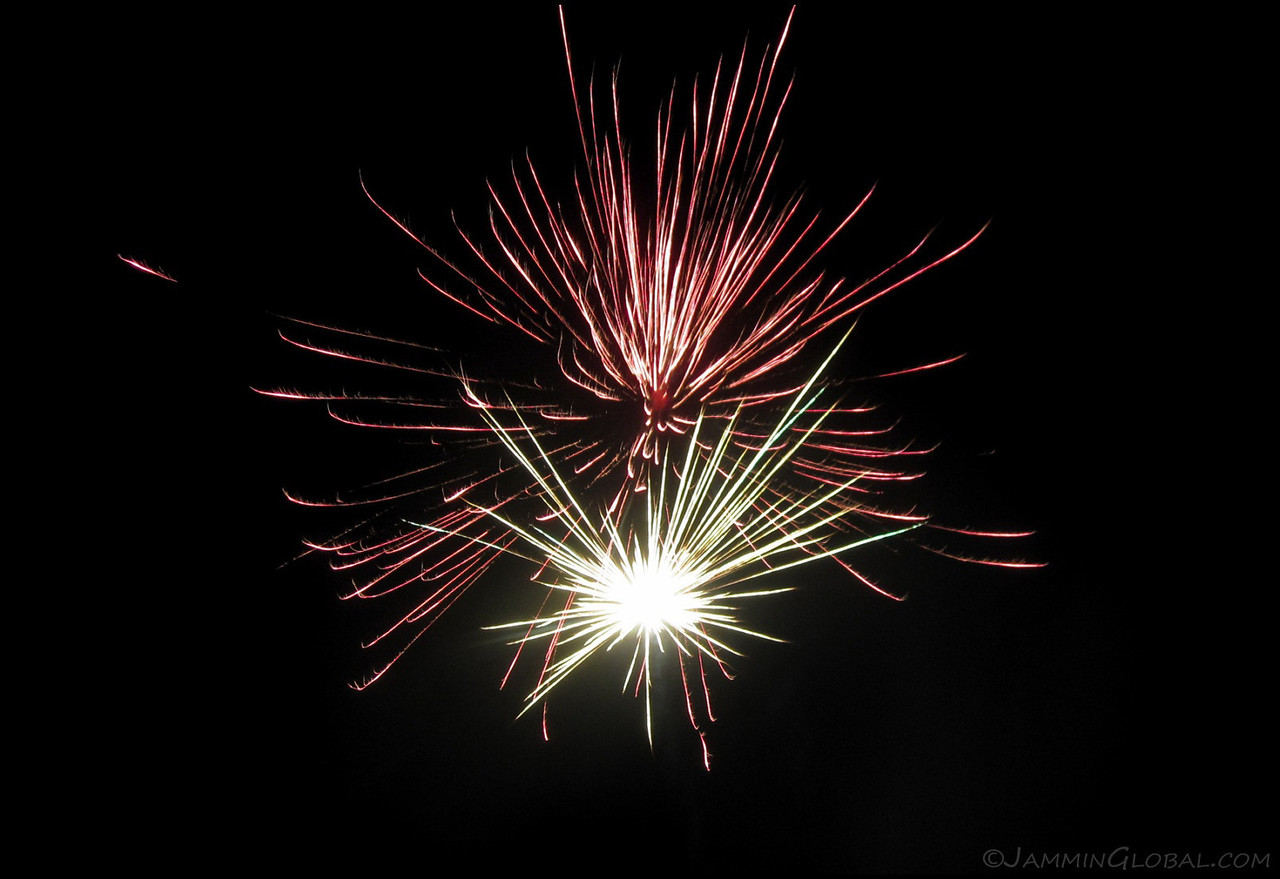 ...put on a great fireworks show for everyone.

...sparklers! The kids went running all over the place...

...making for dancing light in the night. 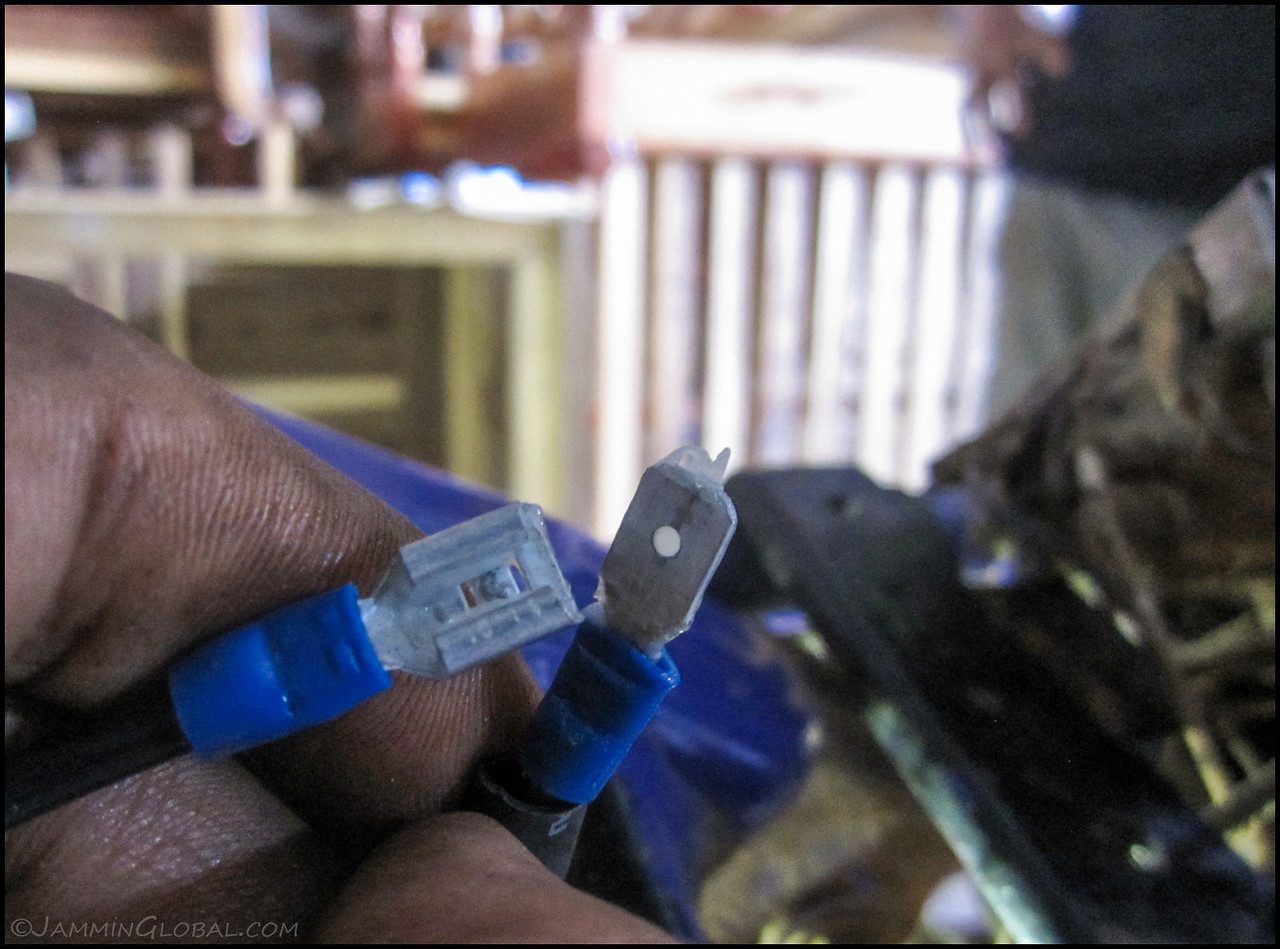 After the fun and games and tourist visit, it was down to business. I had a few serious frame cracks on sanDRina and didn't have the time or couldn't find a suitable place or welder to get the job done. Pete reached out to me and said he had a TIG welding machine and was an experienced welder and would be glad to fix up sanDRina, especially also cause he rode a Suzuki DR650. To get to the cracks on the inside of the frame, I had to remove the rear shock, battery box and clear out all the electricals from that area. That meant I had to disconnect some connections that I haven't touched since when I built sanDRina in my garage in Chicago. I opened this connector and was surprised to still see the contacts covered in dielectric grease that I used to prevent rust and corrosion building up. I must say, I've quite proud of my electrical work on sanDRina, having studied Mechanical Engineering. I haven't had a major electrical issue on this whole trip (except for the wrong diagnosis in Tanzania) and put that down to diligently setting everything up properly the first time with quality parts.

Pete cleaning out the cracks with an angle grinder. He's also a mechanical engineer and at UW-Madison, he was part of the Formula Baja team, where college engineering teams build a buggy racer and compete against other colleges. At Purdue, I was part of the Formula SAE team, where we built a mini formula race car. So it was really good to talk shop with another gear head. Pete is in-charge of the garage at the mission and ensuring their overland trucks are ready to tackle the bush. 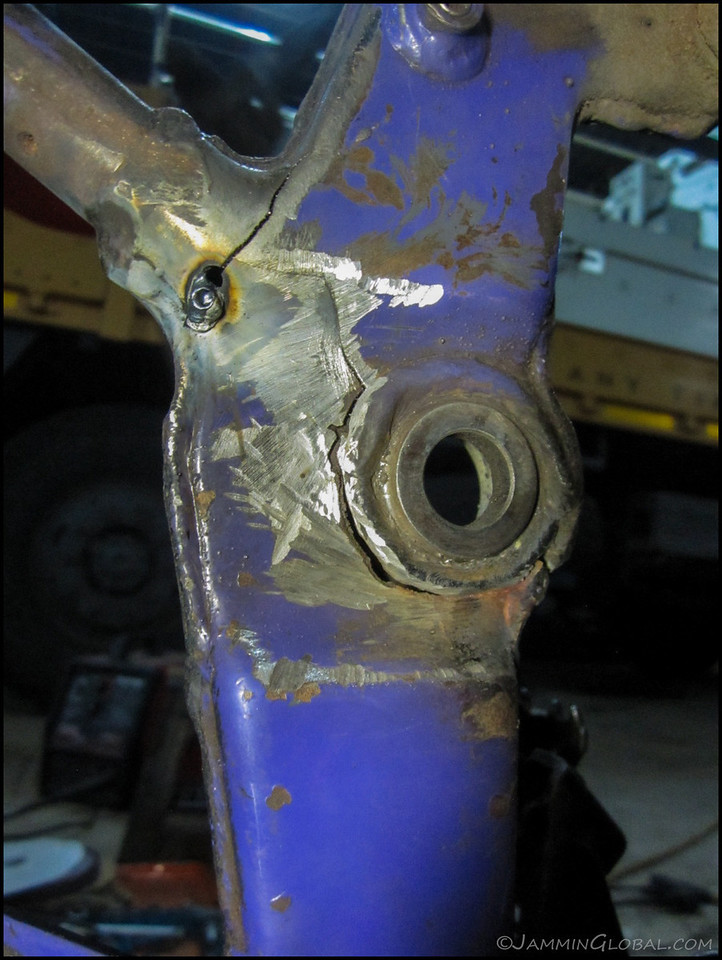 Two major cracks on the inside left of the frame. The cracks started when I had that big jump and hard landing on the Mozambican coast and then again when I hit that massive pothole a few days later. At that time, I couldn't get to these cracks and just managed to weld the outside.

A proper Lincoln Electric TIG welder and sanDRina having some deep surgery done. Pete put in a lot of hours over three days and patched up all the cracks that we found. 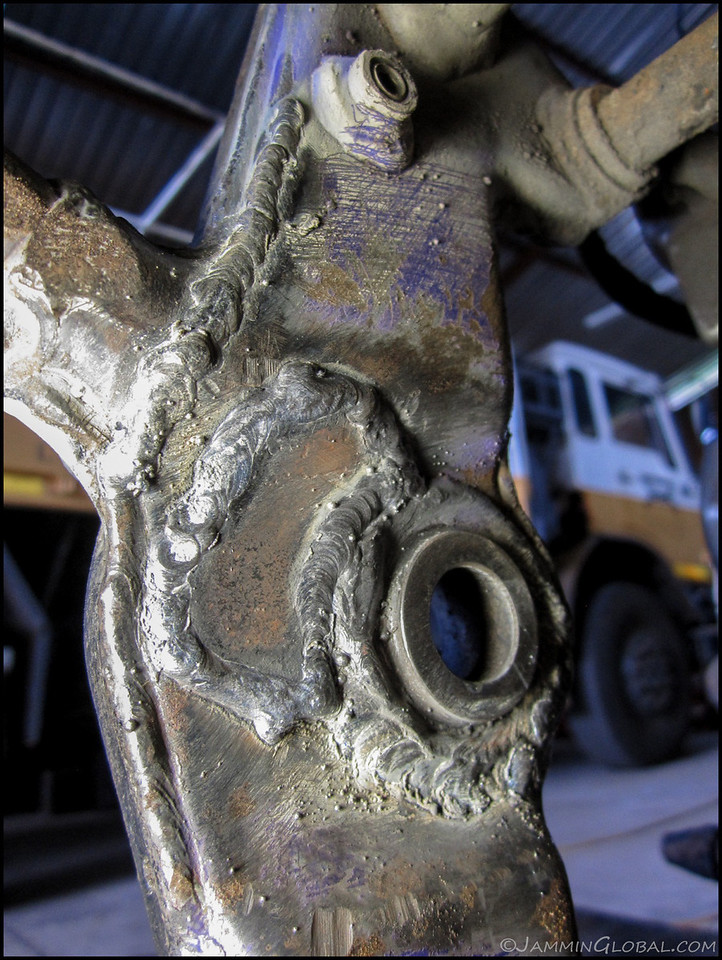 A beautiful welding job. That looks almost as good as factory welds!

I thanked Pete and everyone at the mission for hosting me in the best way I know, cooking my chicken curry. Julie offered to help and we had a good chat in the kitchen. She trained as a paramedic but wasn't excited about constantly responding to developed world problems of heart attacks and gun shot wounds and found her calling after spending two years volunteering in The Philippines. She now runs medical camps for the villages in the area and finds it much more satisfying to treat basic health problems. 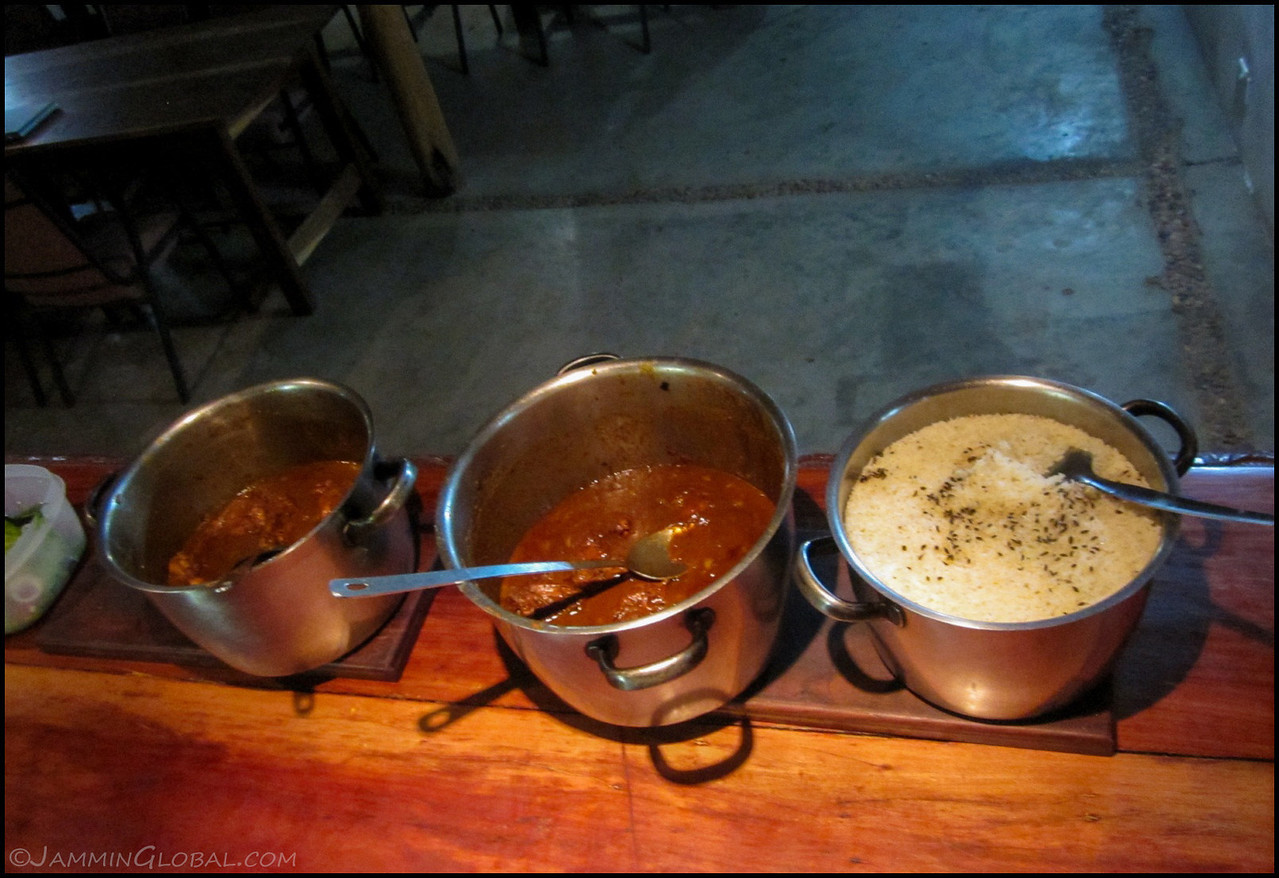 I made one pot spicy and the other not spicy and both were devoured. There was an Indian-South African from Durban there and she was very impressed and said she had not had a curry like this before.

I was all set to go and thanked Pete for his awesome work on sanDRina. He was glad to help out and know that now I could ride the off-road paradise of Namibia coming up next.

One last look at Mosi-ao-Tunya, rumbling in the distance...

...exchanging money at The Capitol in Livingstone and...

...off for the last 220 km (137 mi) of Zambia. The road to the Namibian border follows the Zambezi upstream and I soaked in these last few minutes of being in Zambia. 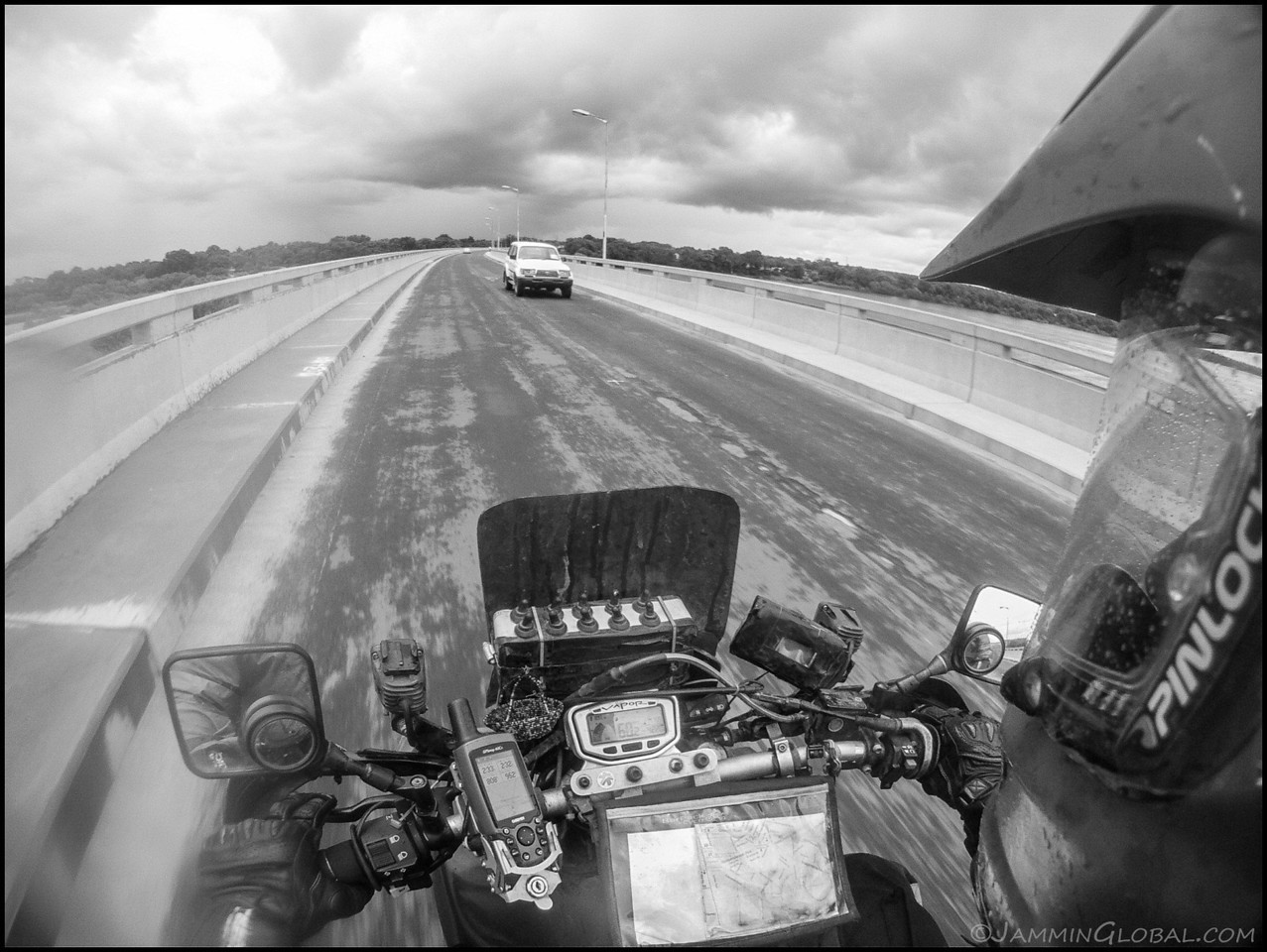 Crossing over the Zambezi at Sesheke to...

...stamp out of Zambia._ I knew my visit to Zambia was not going to be like any of the other countries that I had ridden through on this trip for it was a homecoming. I waded in deep memories from my childhood and was thankful for getting the chance to come back and touch base with those memories. I managed to sleep in my childhood bedroom, visit my first school and travel over the roads that I had traversed as a kid. I visited the girl that I had been sponsoring and wanted another child to enjoy growing up in Zambia. I felt the awe of Victoria Falls and not for the first time. And good girl sanDRina finally got all healed up from her cracks. Now I was all set for some adventure motorcycling in Namibia.