After the nostalgic visit to Chipata, I turned around and headed west. I spent a night along the banks of Luangwa River and then got to Lusaka where I had a special appointment with a girl child. 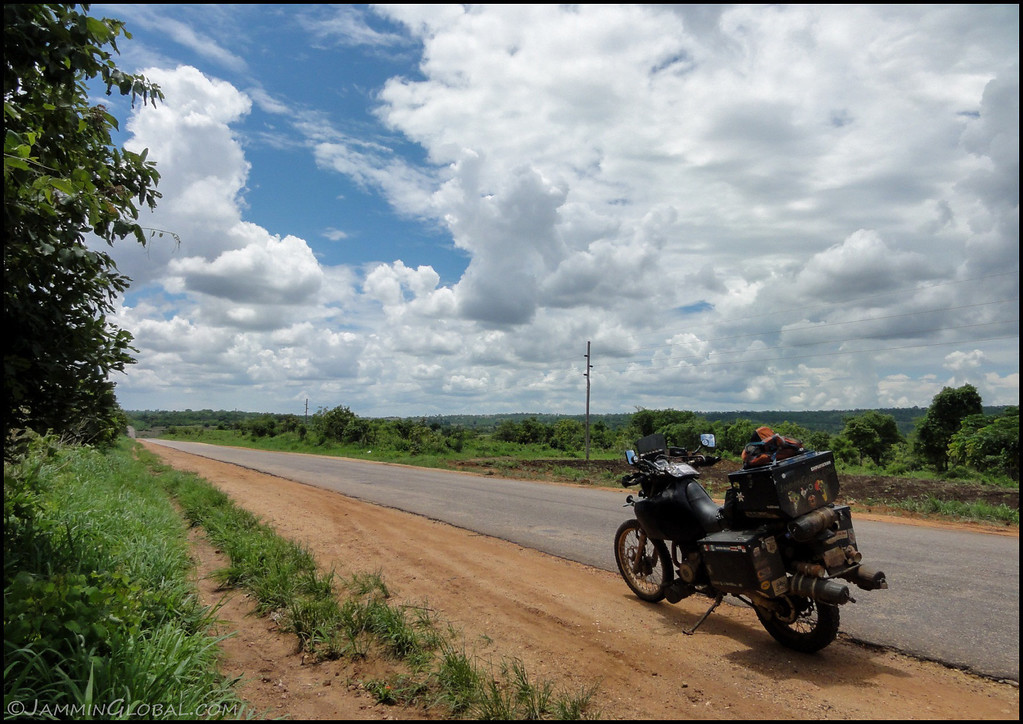 From Chipata, on the eastern edge of Zambia, it was 570 km (354 mi) to Lusaka, the capital. I had been driven on this road many times as a kid in old Land Cruisers and this would be the first time that I was journeying on it myself.

At the junction town of Katete, I ran into these motorcycle travelers from South Africa on BMW R1200GSs, the mac daddy of adventure bikes. They were making a loop of Southern Africa. They had blasted up Namibia, across Zambia and after hitting the beaches in Malawi, they planned to blast down Mozambique before getting home.

A panoramic view of the lush hills of Zambia. That's one good thing about being in a country during the rainy season; the landscape is verdant. As I got near the halfway point of the route to Lusaka, to the Luangwa River Valley, the terrain became more hilly and with the excellent roads, it made for fun riding.

Being the rainy season, wild mushrooms were available everywhere. These boys were trying to sell me a whole bucket but I told them I was just cooking for myself that night with a small pot and managed to buy just a few large, fresh mushrooms.

The halfway marker on the Chipata to Lusaka Highway is the bridge over Luangwa River but being a national strategic asset, it's guarded by the military and no photos are allowed. I remembered crossing this bridge many times during my childhood trips. Right next to the bridge is the aptly named Bridge Camp that overlooks Luangwa River. 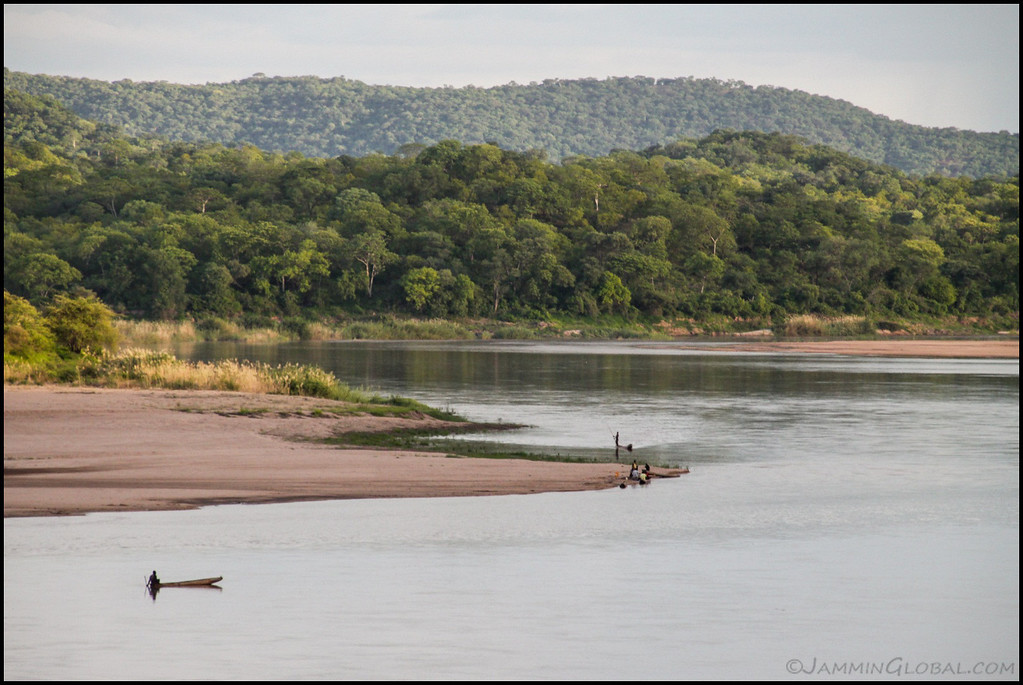 The Luangwa River, flowing from the northeast of Zambia through the wildlife parks of North and South Luangwa National Park and connecting to the Zambezi at the Zimbabwean border. When living in Chipata, our family used to visit South Luangwa NP quite frequently and now, it's being heralded as a hidden gem of Africa, compared to the limelight that the Serengeti, Maasi Mara and Kruger NP get. I hope it stays that way and keeps Zambia a bit off-the-radar.

A panorama from Bridge Camp of the passing Luangwa River.

Morning sunrise from the banks of the Luangwa River.

Filling up my LifeSaver water filter with juice from the Luangwa River. It tasted of sweet childhood memories. Further up in South Luangwa National Park, I saw my first lions and elephants in the wild before seeing them in a zoo and thank Zambia for providing me with a fantastic childhood.

Bridge Camp was empty during my stay as it was the low season and I set up my tent at the cooking pavilion where I made a tasty mushroom and rice dish. 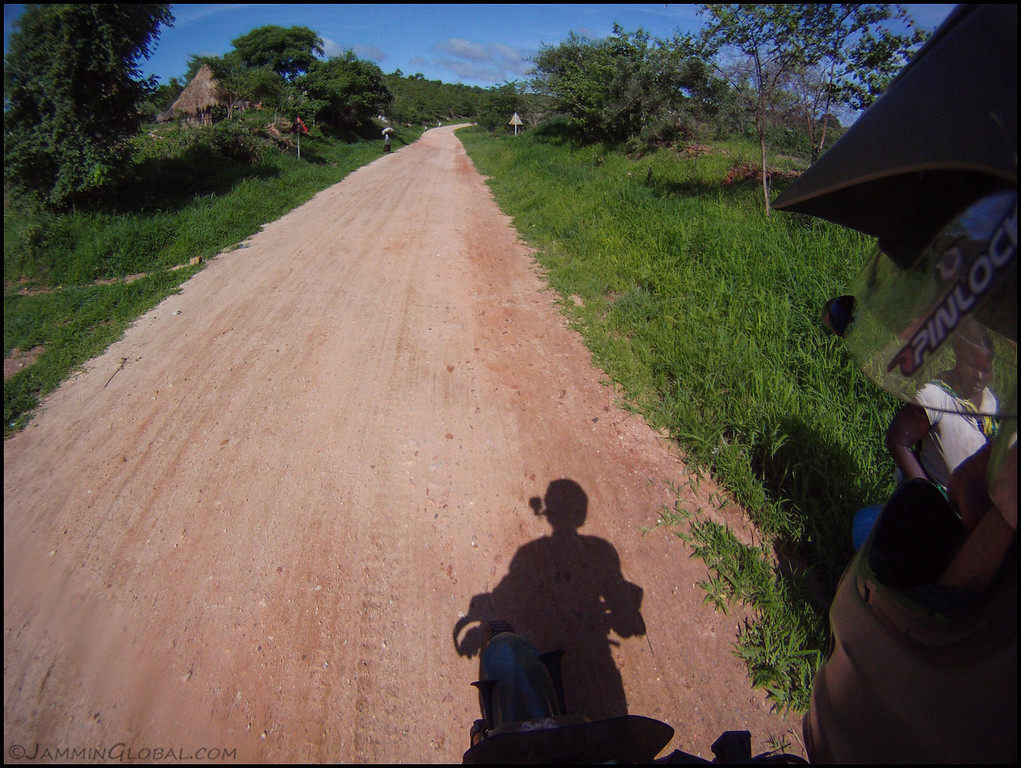 A few kilometers of off-road getting back to the highway. I didn't get the chance to explore Zambia much as I was on a schedule for my South African visa that was already counting down to expiry.

Riding the wonderful twists and turns and enjoying leaning sanDRina at a good speed. She's a heavy bike, laden with all my stuff, but she's still very well balanced and a true dual sport; handling almost anything off-road and a joy on-road. 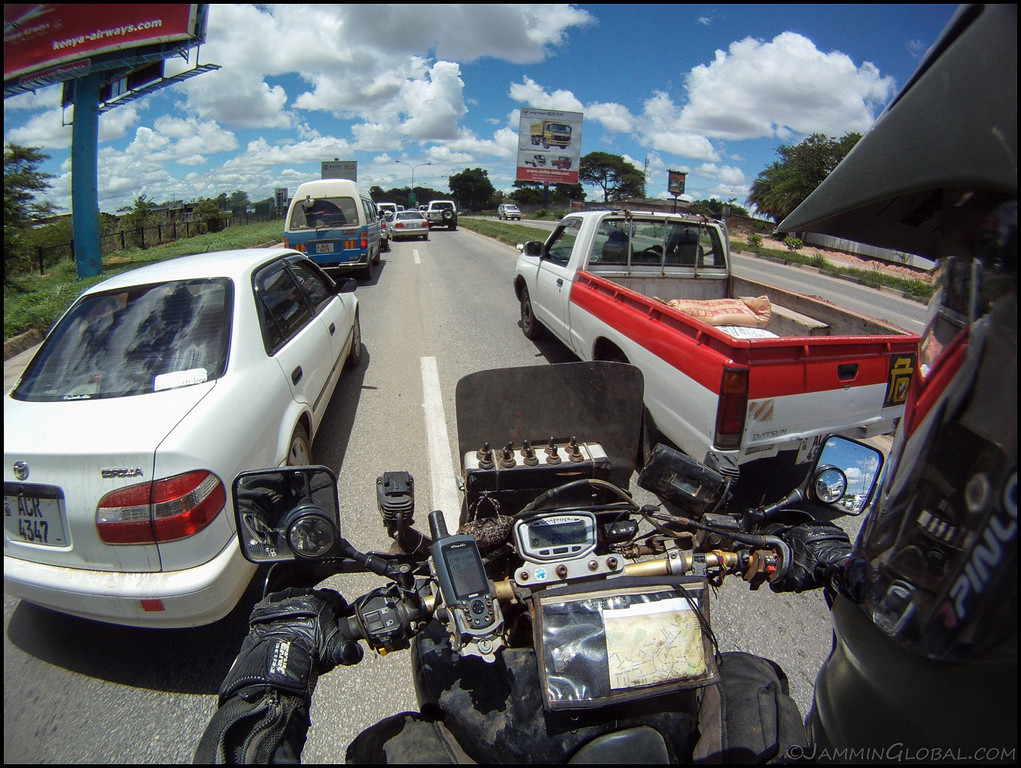 Entering Lusaka and lane-splitting in traffic. I love riding out in the open but I also get some kicks riding in dense cities. If you think this is scary or dangerous, trust me, I'm a professional. 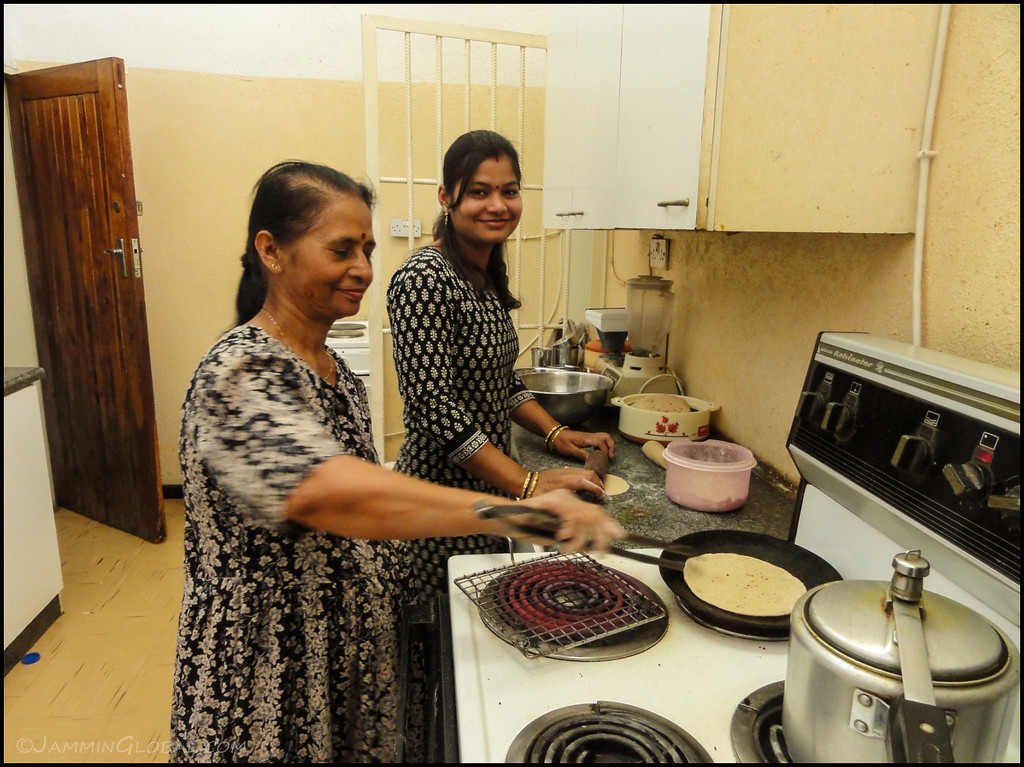 Staying with an Indian family in Lusaka whom my parents knew and Verma Aunty is making some fresh rotis.

Simple Indian homefood of rotis, dahl, aloo subzi (potato) and drumstick curry. Drumstick is one of my favorite Indian vegetables and it's grown locally here just for the large Indian population, who have been in Zambia for over a hundred years. Unlike Indian migrants who went to South Africa or other parts of Africa, Indians who came to Zambia, or Northern Rhodesia as it was known before independence, most of them were not indentured laborers but artisans and businesspeople. And also unlike the uneasy relations between Indians and the local citizens, such as in Uganda in the 70s, Zambian has had a good relation with its Indian community and maybe that's why so many Indian families came and stayed here.

One of the main reasons I came to Lusaka was to visit the local Children International Centre. I had been sponsoring a child with them for the past few years and for $22 a month (of which 80% goes to the child), they lift one child out of poverty and give them a solid start to life by providing education, nutrition and guidance.

Getting a tour of the Children Intl Centre and one of the main benefits of the program is a dedicated clinic that ensures child and mother are in optimal health.

There's also a library and a school at the facility. Children Intl has centres in India, Latin America and Zambia and I chose the centre here because I wanted to give back to the fantastic childhood that Zambia gave me. 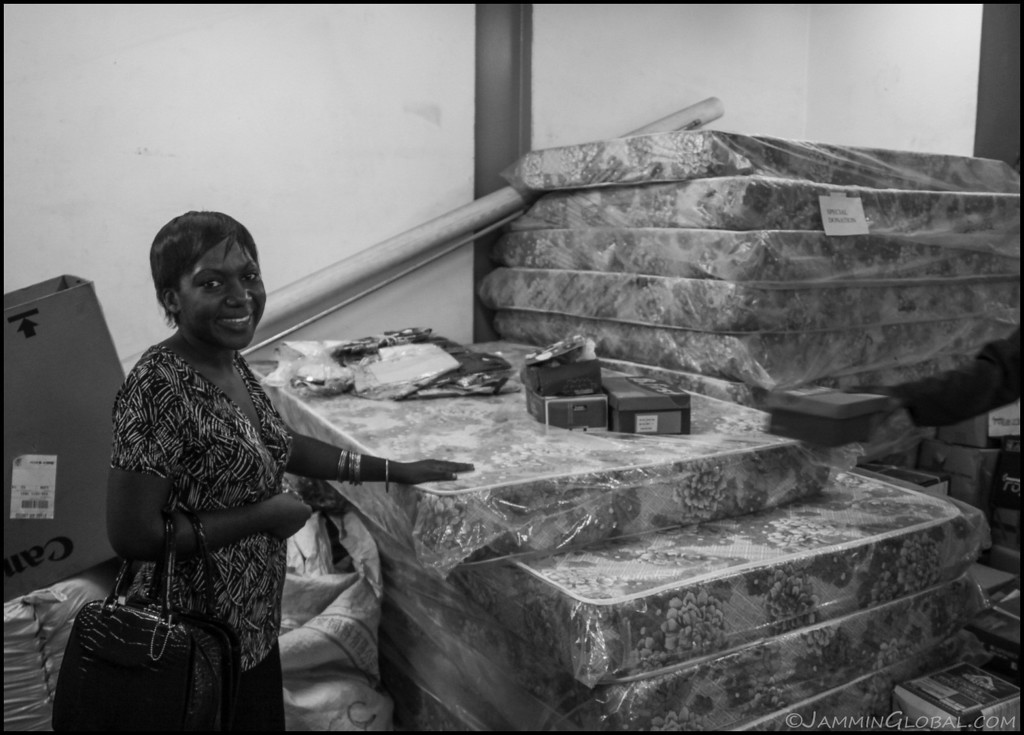 Joan, the officer from the Children Intl Centre in Lusaka showing me the mattresses that each kid gets every year.

They also receive regular gifts such as clothes and utensils that the family can benefit from.

Meeting my sponsored child, Abigail! She was 7 years old and I don't know if she understood what was going on but she seemed like a smart girl with a good head on her. When I was a kid, my nick name was Abi and it was a strong moment when Abigail's mother referred to her as Abi. This was meant to be :) I spent some time hanging out with Abigail and hoped she would remember this bald man who visited her once.

While taking pictures with Abigail, these boys really wanted their photo taken and struck up some great poses. 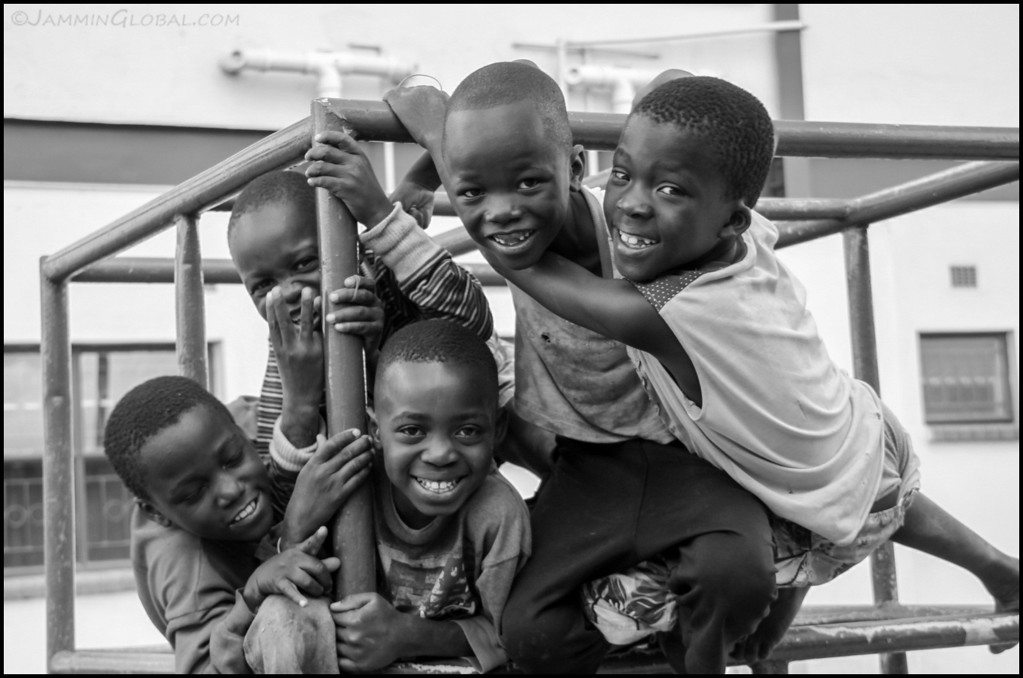 So much joy and laughter. 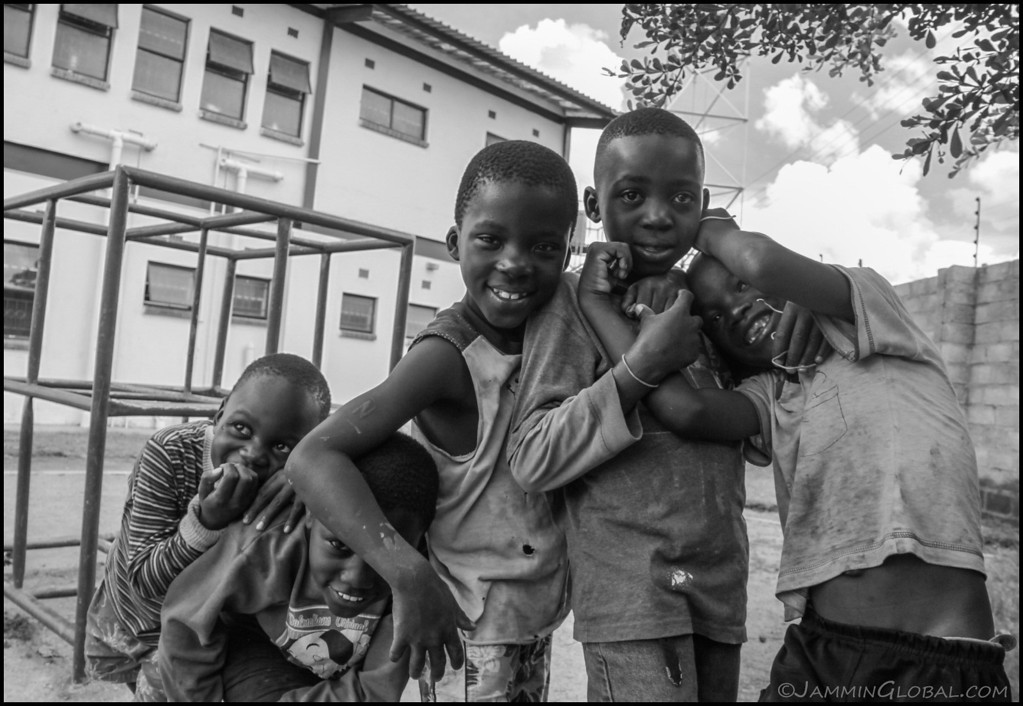 The kid in the middle had this twinkle in his eye and I can see him going far in life. Such wonderful energy to end my visit to the Children Intl Centre. I hope these kids benefit from the program and contribute to a strong Zambia in the future.

Right opposite the Children Intl Centre, a bar with Mosi Lager, the beer of Zambia. Mosi, referring to Mosi-oa-Tunya, the name for a thundering waterfalls that I was heading to next. 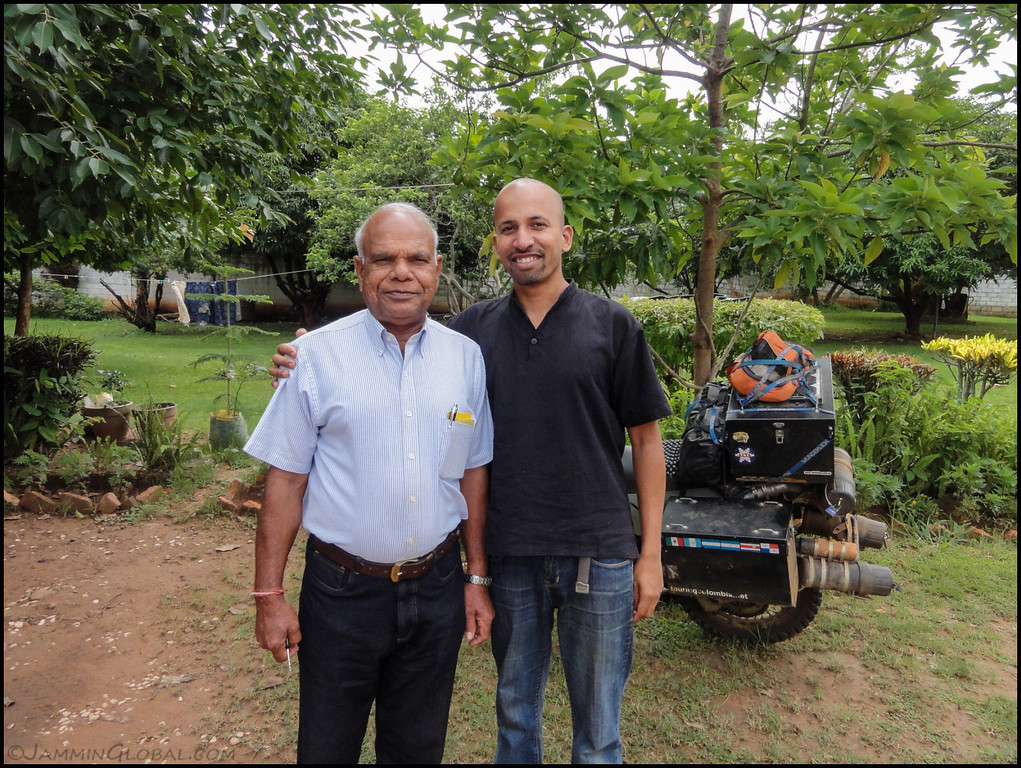 I received my visa for Namibia and thanked Verma uncle for the stay. He is an agronomist and is an important figure in the Zambian agricultural sector. We had many interesting discussions over the few days I stayed here. Uncle told me that it's been calculated that to feed the entire world, it would take 850,000 sq km of land and Zambia is a very fertile land and its total area is 750,000 sq km. Wow, that means we have more than enough arable land to feed everyone on the planet, yet, a billion people still go hungry every night while one and a half billion are overweight. We also discussed physics as uncle, being a biologist, never fully understood some concepts in physics and asked me to explain what e = mc2 means, which I did.

Heading out of Lusaka and I remember this iconic building, Findeco House. 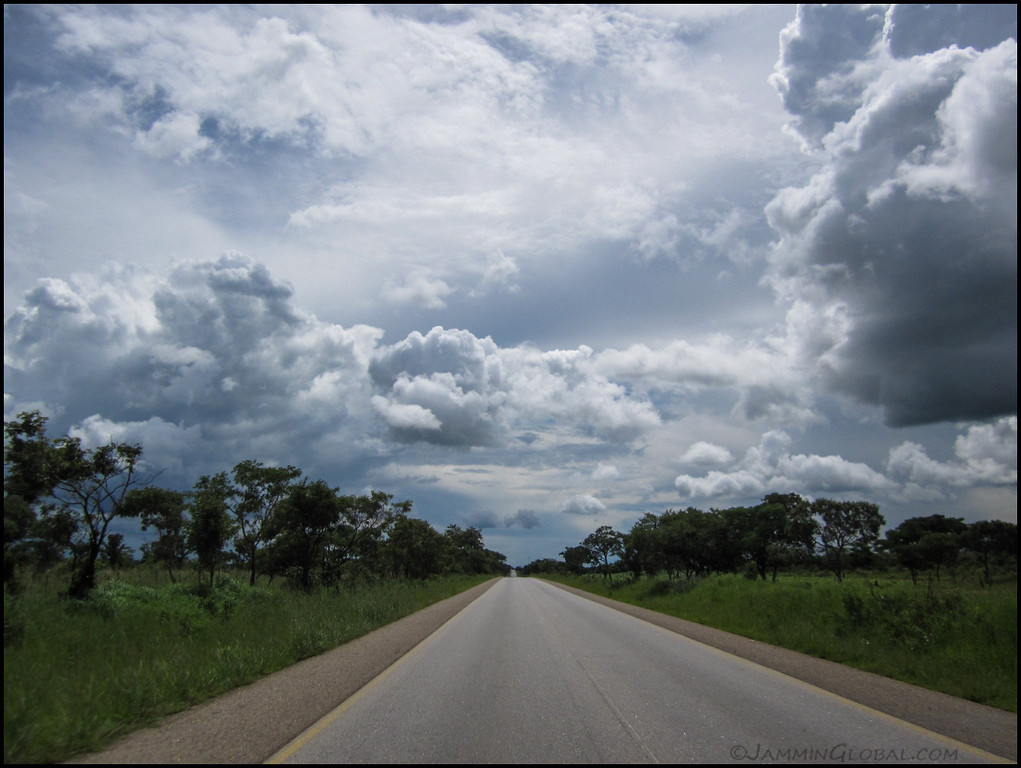 Back on the open road, heading south to Livingstone with storm clouds making for a spectacular sky. 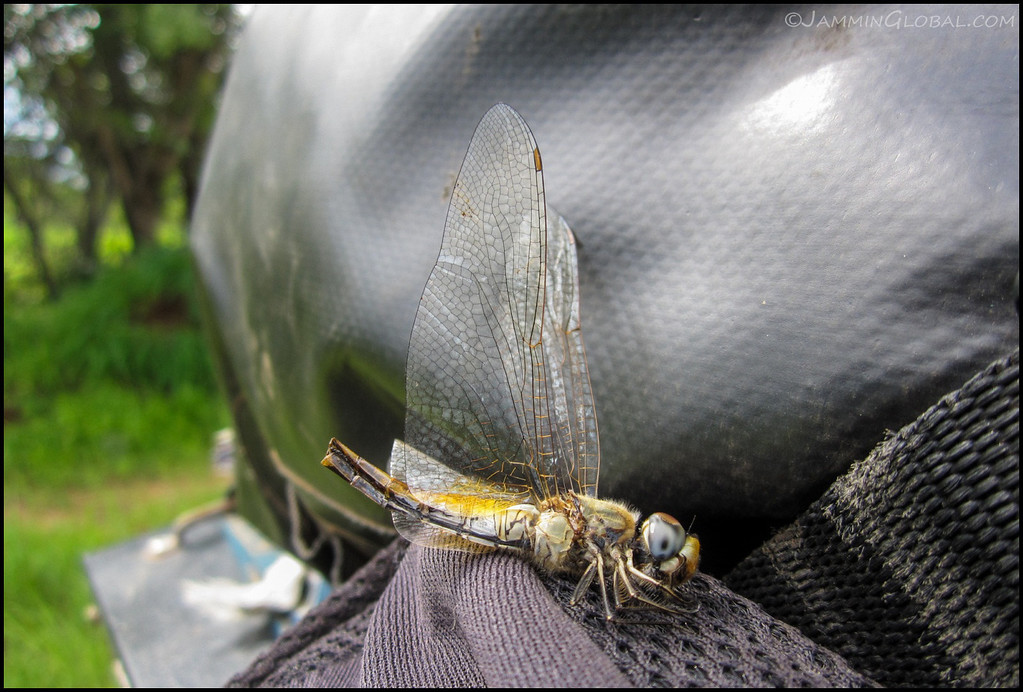 A dragonfly caught in sanDRina's oil cooler. I remember as a kid that dragonflies were sold as a cheap protein in the market to go with nshima, the maize meal staple of Zambians.

Stopping for some roadside lunch and having the staple food of north Indians, roti and aloo with some spicy achar (pickle). This would probably be my last bite of Indian food till I got to Durban in South Africa.

sanDRina, my beautiful home on the road. She was hurting a bit from some serious cracks in her frame and up next was a much-needed visit to a specialist.
_