Mozambique, Part 6: From the Coast through Beira to the Border

The last day of riding the coastal roads of northern Mozambique with Rob, a South African rider who I met a few days earlier. The story continues from our beach camp at Quelimane and enters back into civilization at the big northern city of Beira. I took care of the crack in sanDRina's frame along with some other maintenance and then headed north, through Tete to Zambia.

Our massive sun just after rising up past the horizon from the beach at Quelimane. 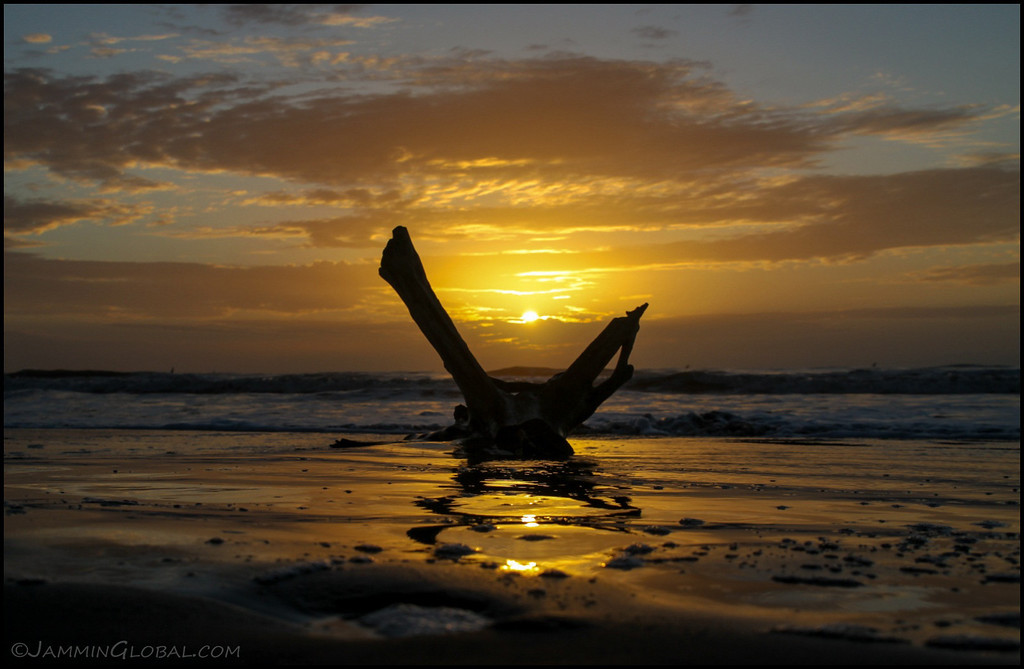 A piece of driftwood framing the sun with reflections in the wet sand.

A Mozambican man saying his prayers in the surf at Quelimane.

Rob and I packed up our camp, which was set up in the lawn of this run-down hotel and got back on the road for one last day of off-roading down Mozambique's coast. 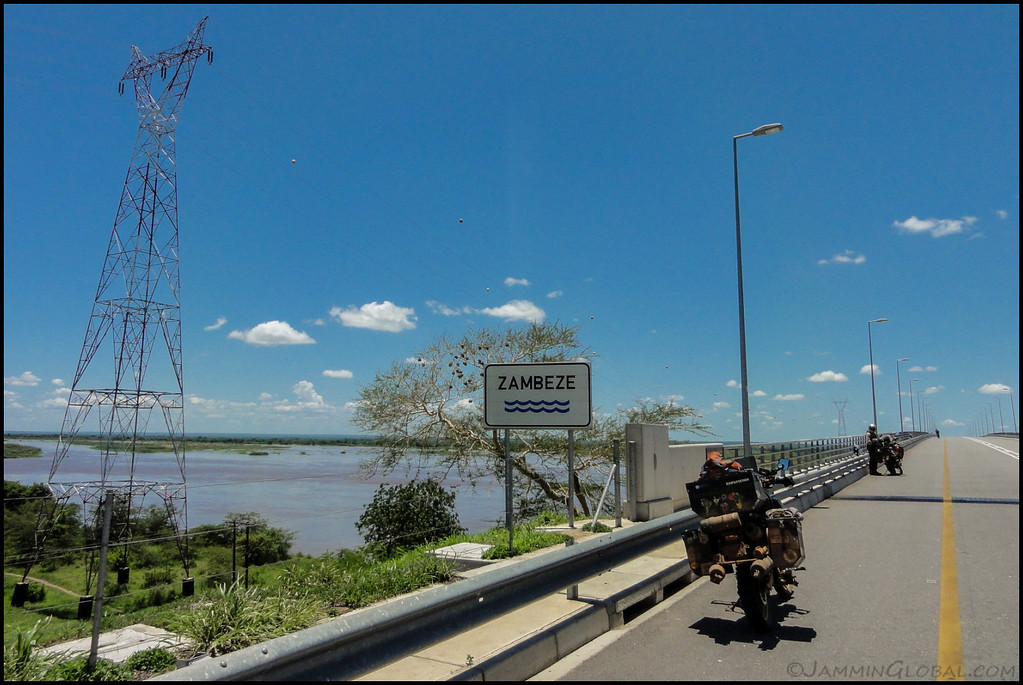 Crossing the Zambezi River, which starts in Zambia and empties in Mozambique. I was hoping my Zambian visa would come through so that I could pay a visit to the Zambezi's most notable feature, Victoria Falls.

Back on the dirt road heading through forests that looked relatively untouched by man. 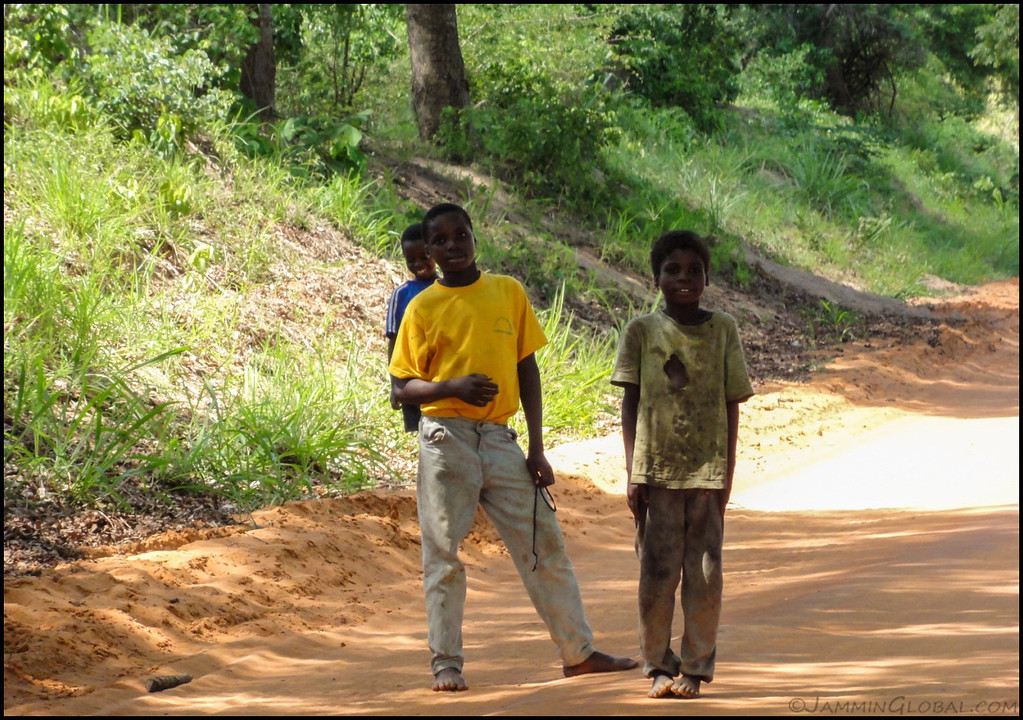 Curious kids standing a ways off and just observing these two strange men on their big motorcycles.

I was following my GPS and the route in Tracks4Africa that has all these wonderful less-traveled roads mapped.

My favorite colors: the brown earth, the green trees and the blue and white of the sky. No traffic or civilization in sight. Ahhh.... 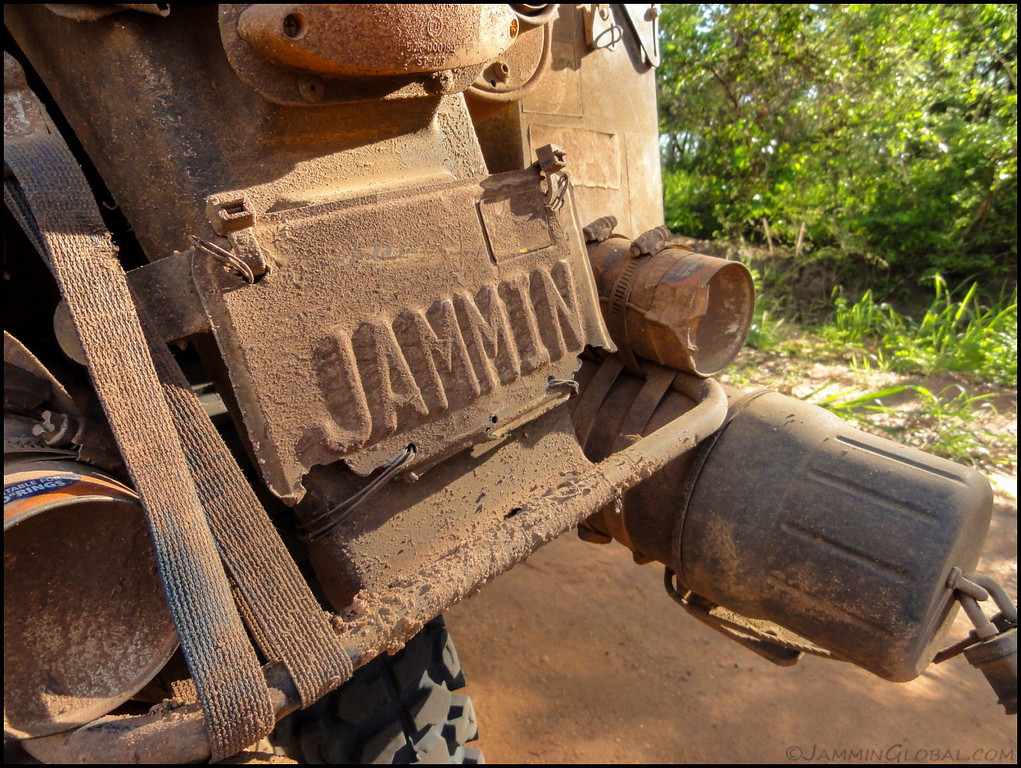 Rob and I enjoyed the last few days of riding through the rural Mozambican coast but it had to end at some point and we hit the main road and turned for Beira.

Having breakfast with friends of Rob's in Beira. They welcomed us in from the wild and we took a few days off to wash everything: ourselves, our clothes, our gear and even a bit of the bikes. I also took care of some paperwork and got lots of bike maintenance done. Deon, the man of the house is not pictured but he's into the steel business here and his wife, Denize, recently moved from Brazil. She said my Portuguese was not bad for just picking it up while traveling.

Deon put me in touch with a friend of his running a big trucking business and sanDRina is having her cracked frame re-welded at the workshop.

I removed the fuel tank and wow, what a surprise - a huge crack further up the frame. This was most definitely from riding about a thousand kilometers from when the first frame crack happened towards the start of the coastal off-road riding. Instead of viewing the DR's frame as weak, I'm so impressed that the damage wasn't worse for the kind of riding I did (wash-board/corrugations) with the load I was carrying after the first frame crack.

Nervous welding moments as I couldn't move the wiring harness too far out of the way. We had wet rags all around and no damage was done to the wiring. I thanked the welder for his excellent job in fixing up the cracks in sanDRina's frame.

Using my trusty homemade Bike Crutch to lift the swingarm while I replaced the chain and sprockets. I made this nifty tool using a walking cane and a U-bolt and it's been on all my trips since Alaska in 2007. The best part is the rubber boot - it keeps a solid grip on almost any surface. Inspired from this post on Dual-Sport BC: http://bit.ly/bikecrutch

New Galfer organic rear brake pads going on. The old set lasted 7,546 kms (4,690 mi) and was installed during the major rebuild in Nairobi. They're way past the wear indicator and check out the grit that's been grinding on the rotors. These soft pads performed well over lots and lots of off-roading (where the rear brakes are used more than the front). 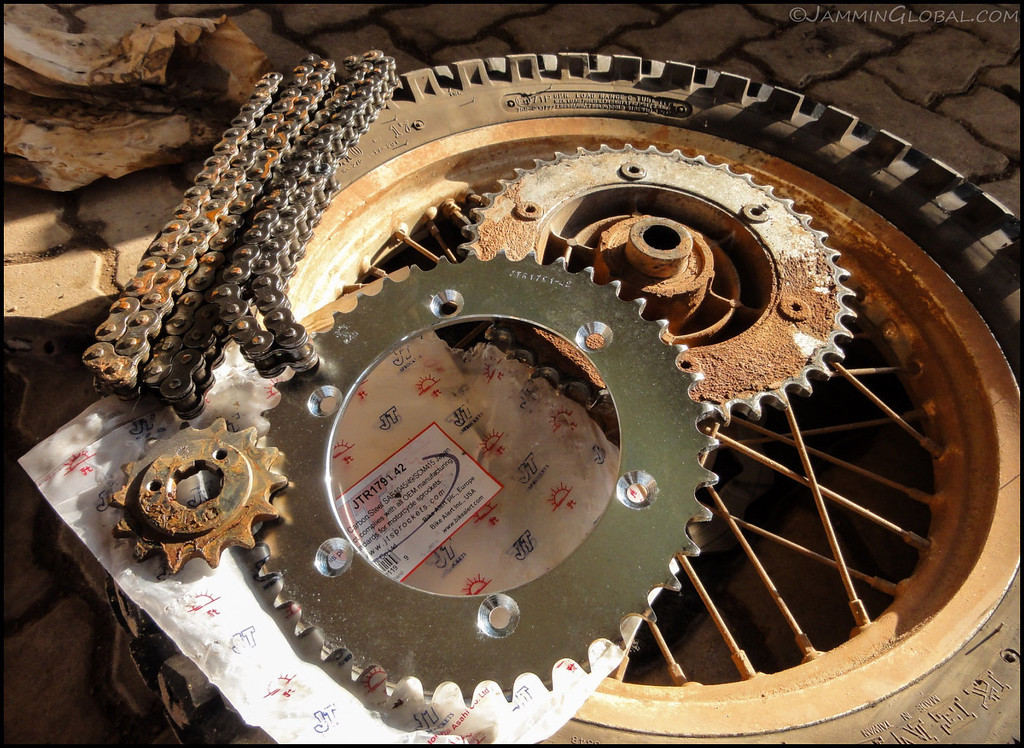 sanDRina getting new JT sprockets and chain installed. I was lugging all these spare parts since Nairobi and am always happy when the spares get used because that's a weight reduction! 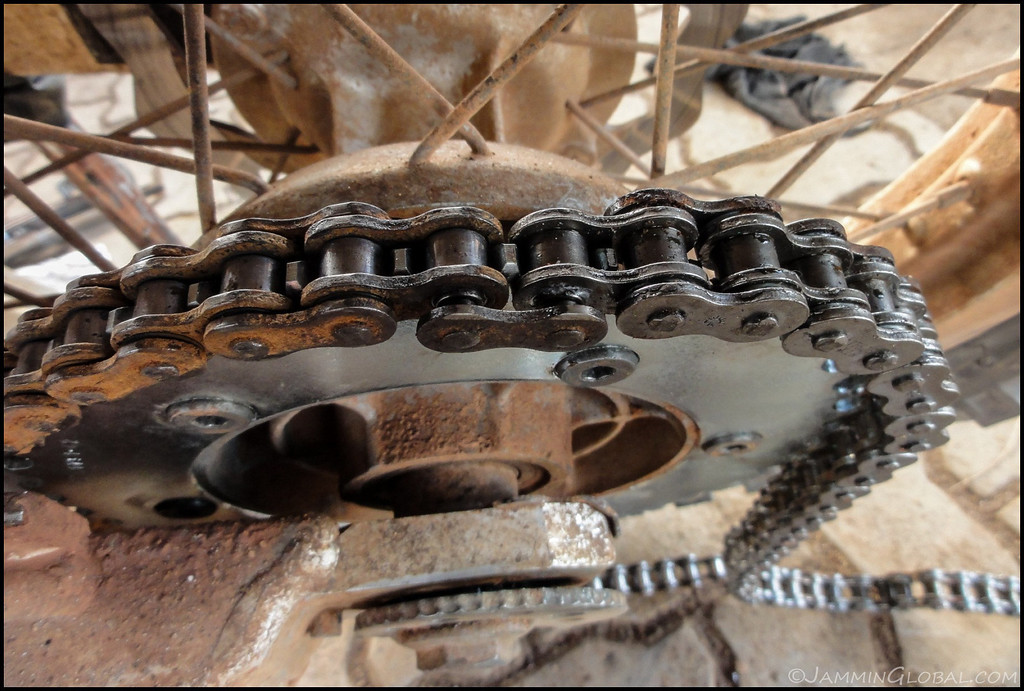 New JT chain going on. I got sponsored by JT for the sprockets and they wanted me to test out their new chain that they were developing. I had a spare RK chain in case this one didn't last but its side plates looked heavy duty and up to the task. The old DID V8 chain was installed way back in Addis Ababa, before my Lake Turkana ride and lasted for 14,972 kms (9,305 mi). The chain wasn't finished but it was stretching and this was a good place to work on the bike.

Riveting the master link. I love proper tools. I've been lugging this Motion Pro Chain Breaker and Riveting Tool all along since Chicago and while I've only used it a few times, it's been priceless. The thing is, I can't plan exactly where I'll be when I need to install a new chain, so my mantra has been to carry the spares and the tools to get the job done wherever the need arises, such as in San Luis, Brazil, Addis Ababa or Beira, Mozambique.

During my downtime in Beira I got news that my visa for Zambia was finally approved. Yay! I was now going to be able to visit my childhood home. The visa was quite complicated to arrange as I needed someone in Lusaka to apply for me and now I had an approval letter in hand that would allow me entry. I said good-bye to Rob as he was continuing on to Durban and thanked Deon and Denize for hosting us. From Beira, I headed inland towards Tete and the border for Zambia.

An overcast day with views of Mozambican farmland and the Bvumba Mountains in the distance. Beyond those mountains lies Zimbabwe.

I was in cruising mode and enjoying the good roads and lack of traffic, unaware what lay ahead...

I came across a blind corner at a good clip and saw that there was a bridge across a small canyon. I continued at the same speed and only at the last second did I notice a super massive pot hole at the other end of the bridge. It must've been 2 m (7 ft) across and quite deep. sanDRina hit it really hard and I was lucky to ride it out. I pulled over and yup, the frame cracked again and this time in new spots. Poor girl, just taking so much abuse.

At the edge of Tete I pulled over at a welding shop and promptly had sanDRina's frame all healed up.

Crossing the Zambezi at Tete, the largest city in this part of Mozambique. It was an important trading town before the Portuguese got here and recently it's been picking up with the mining industry.

I stayed the night with Karen through CouchSurfing, who's been posted here with the mining industry. She's a Japanese Brazilian and as I remember from my other Japanese Brazilian friends in Brazil, she said she didn't fit in back home in Brazil, nor was she accepted when she visited Japan. This remote corner of Mozambique was now home.

The last day in Mozambique, heading north for Zambia.

The kids are super-friendly in Mozambique. More than just waves, I got lots of thumbs-ups and enthusiastic cheering on. I think they're ready for the Dakar!

A common sight on the roads of Mozambique - bags piled high with charcoal. I love how the excess on top is almost as big as the main bag. They must've picked it up from consumer promotions, such as "now 75% extra!"

The long, empty road heading for the border. This road was recently paved as the government is hoping to direct truck traffic from the busy Zimbabwe to Beira corridor and encourage overland trade into Zambia and Malawi.

Good-bye, Mozambique. I completely loved my time riding in the northern half of this wonderful country. A lot of undiscovered places and friendly faces with the sweet sounds of the Portuguese language wafting over delicious sea-food. I'll be back someday... 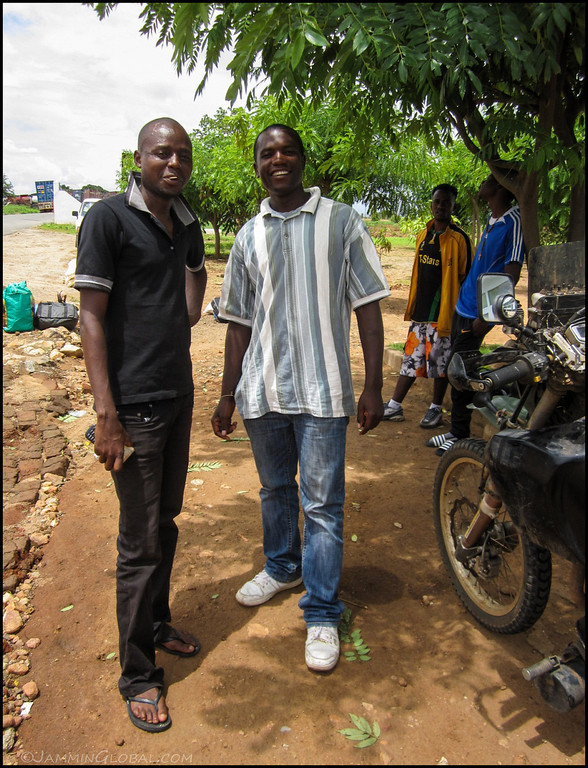 Money changers at the Cassaticaza border with Zambia. They gave me a better rate than I was expecting as I traded the last of my Meticais for Kwacha. A nice feeling to be leaving Mozambique with. Oh yeah and my Mozambican visa was only stamped for 15 days but I stayed two days extra with no problem.
_

With that, my adventure through Mozambique comes to an end. Before I got to Africa, I knew this would be one of my favorite countries and it lived up to those expectations. Maybe it was the Portuguese connection, maybe it was the abundant and cheap seafood, maybe it was riding with a new friend down the rural coast or maybe it was just the good feeling I had from being there. Whatever it was, I know 15 days wasn't enough and let's see when I can get back here again.