This is the continuation of the off-road adventure that I had along Mozambique's rural coast. I had teamed up with Rob, a South African chef riding to Durban and thoroughly enjoyed his delicious and simple seafood preparations at the end of each day's ride.

The story continues just as we put up camp at Pebane, about a third of the way between Ilha da Mozambique and Beira. In the morning, we had a nice exchange with a group of fishermen as they waited for calmer seas before we headed back on to the trail to Quelimane. The fun riding was over and we were beat up over washboard all day long.

The town of Pebane wasn't much to see, so Rob and I asked our way towards the beach. At the end of the road there were some cottages and a clearing under these trees. We asked the caretaker if we could camp here. Sure. How much? Free. Sweet!

Our campsite by the beach and this little stream with a beautiful sunset. 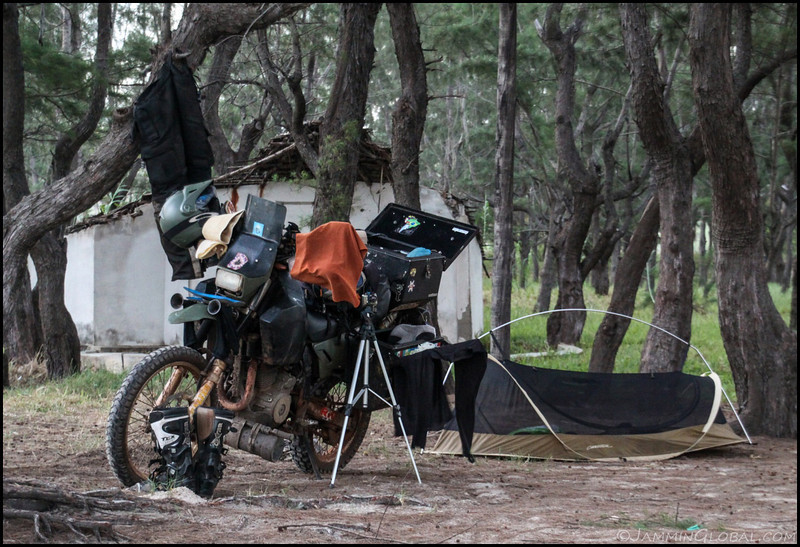 sanDRina exploded into 'home' mode. That's my one man Catoma Twist tent without the rain cover. It's just a mosquito mesh, which is perfect for letting in cool air at night and seeing the stars as I nod off. That orange towel from REI has been my traveling towel since 2006 and smells like it too! Someone said it smelled like a wet dog, which I don't really take offense to. It still absorbs all the water after a bath and dries in an hour. and sanDRina doesn't mind, dirty girl herself. 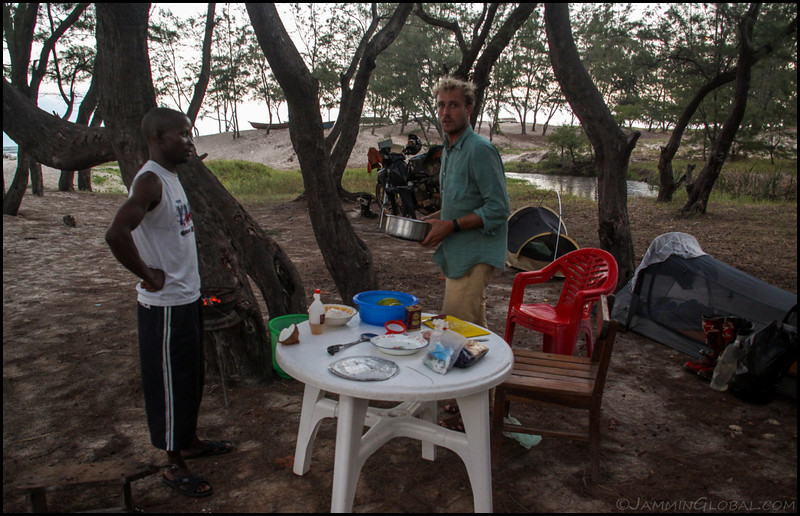 Chef Rob is already busy preparing dinner. While he was taking a nap after the hard day's ride, I arranged with the caretaker to let us use these table and chairs for the evening. There was no fresh seafood around but he had a lot of freshly-frozen seafood, which was just fine. We bought a bunch of shrimp and squid and he threw in the use of some pots and charcoal for the night.

A wooden boat by the beach just past our campsite.

The pristine beach at Pebane with a brightly setting sun.

A far cry from the exclusive kitchens of El Bulli and El Celler de Can Roca but a good chef needs only some heat, a pan and his cooking sense to...

...prepare some tasty food. Rob cooked up some seafood pasta with just olive oil and salt. Light and delicious. Once again, the meat was too much for just the two of us but we gorged to replenish the calories after a long day in the saddle.

Just before sunrise on the Mozambican coast at Pebane. 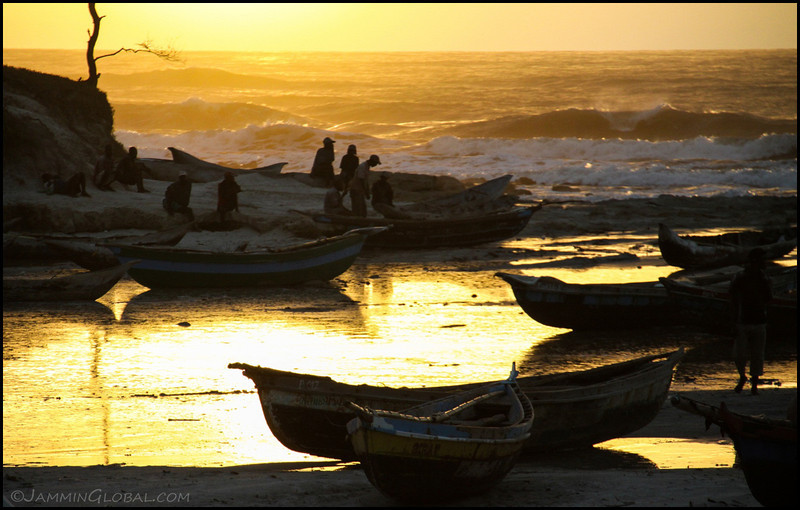 The golden rays of the rapidly rising sun. 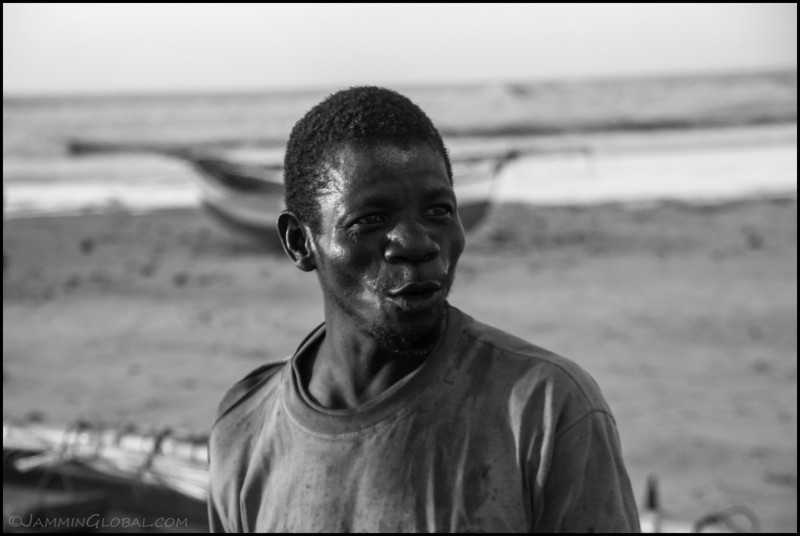 A lot of fishermen were about, waiting for calm seas before heading out. This man had an interesting face and...

...he was one of the few repairing his boat during the down time brought on by the rough seas.

The morning rays highlighting the concentration needed in mending a boat. The other guy just wanted in on the photo.

Everybody helping to turn this boat over, including the two ghosts up front. 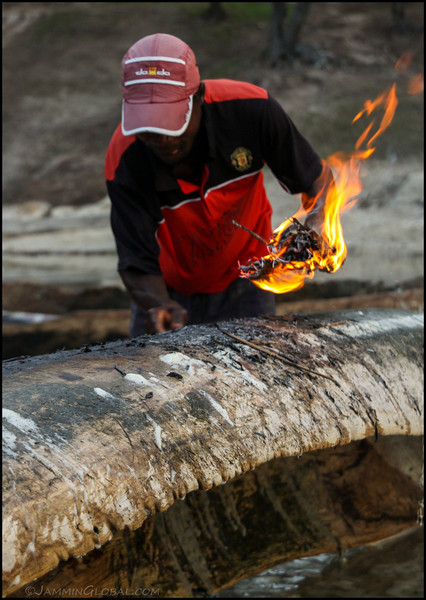 An older canoe being repaired with fire.

As the fishermen gave up heading out to sea, they had to walk back through our camp and everybody just stopped and stared for a while. Fair-enough, considering we just stared at them on the beach. After about 10 minutes, we really had to pack up, so I politely asked if they could leave and most of them did.

Our Pebane camp all packed up and we thanked the caretaker for all he did. The camping itself was free but we used one of his cottages to take showers, bought the seafood and beers from him and used his furniture and pots and paid him a round 300 Meticais ($10.12) for the both of us. Not bad, considering how expensive Mozambique usually is.

Well-rested for another long day along Mozambique's rural coast. The children in villages were always cheering us on and we felt very welcome.

Fueling up. This was the official filling station in this area. Fuel was kept in those huge tanks and sold by the jerry can. 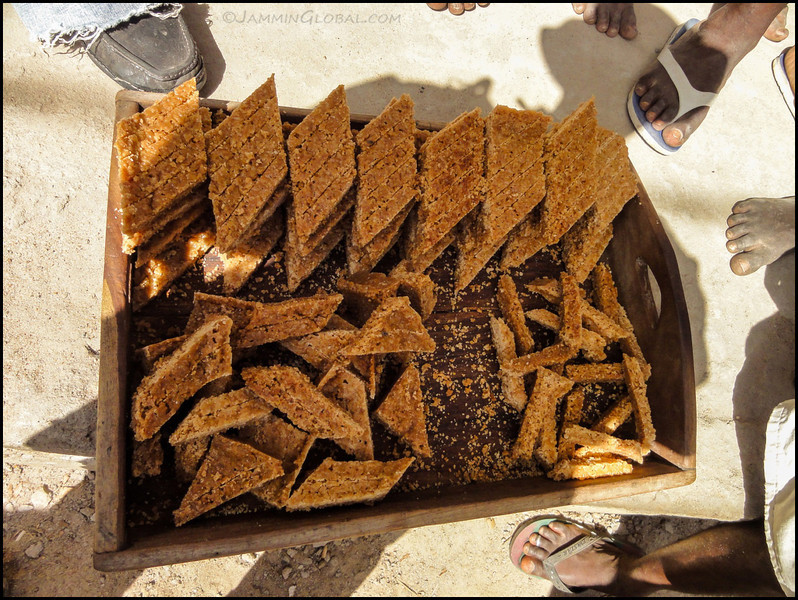 I recognized this sweet. It was coconut burfi! My mother makes this a lot in South India and what do you know, there's an excess of coconuts in Mozambique and they figured out the same sweet to make from it, or maybe there's been some recipe exchange over the years.

Leaving the towns behind, it was back into the bush. A bright, sunny day through forests and corrugated roads.

We were both fatiguing quickly. After 30 kms of fast-riding over washboard, we needed a good 15 minute break, before going back in for another beating. It was a long day with 300 kms (186 mi) between Pebane and Quelimane and most of it was brutal washboard. 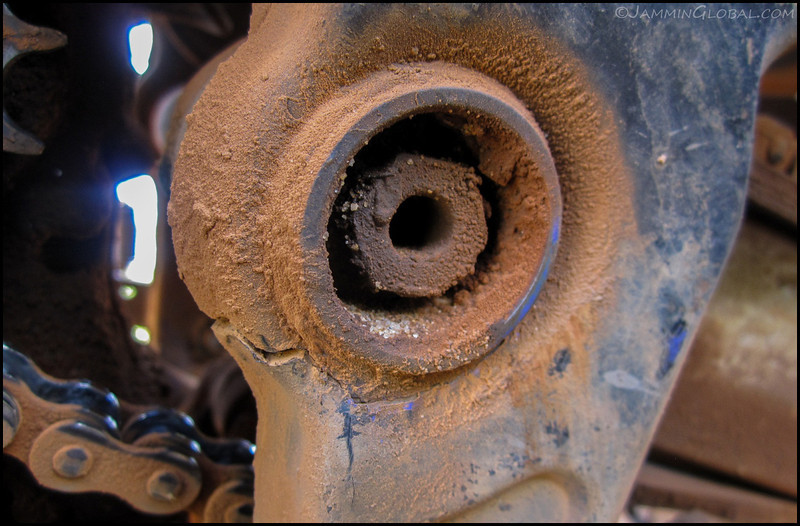 During one of the breaks, I noticed this huge crack on sanDRina's frame. Oh no! This must've happened on the first day of this coastal adventure when I hit a bridge at full speed and landed really hard. The forces must've gone through my rear shock mount and cracked here. We were still in the bush and had over 600 kms (373 mi) till the next city of Beira.

Nothing to do about it besides suit up and...

...get back on the bike and ride out of here, over more washboard. I was hoping the crack wouldn't get worse.

We arrived at Quelimane and setup camp at this old hotel and got the caretaker to setup a charcoal stove and we were both so tired today, we just had him salt and grill the fish for us. It was a 4 kg pedra and again too much meat for us but we ate most of it.
_