On my long journey, there were various small adventures and the ones I cherish the most are the ones that take me off-road for it is there that we pass through remote, rural lands and see the people who live far away from the civilization we know. After a day-off at the enigmatic Ilha da Mozambique, I teamed up with Rob, a South African rider heading from Barcelona to Durban on a Honda Africa Twin, and we journeyed through the coastal roads of Northern Mozambique.

The rainy season was in full swing but it didn't make the off-roading a chore and actually helped us out by firming up the sand and cooling down the temps. After our first night of camping by the shore in Moma, we had an epic estuary crossing, only realizing we were drenching the bikes in salt water at the end. But all good in the spirit of adventure and some serious technical riding and non-stop corrugations followed us into Pebane.
_

Rob and I heading out from Causarina Camping across the waters from Ilha da Mozambique. We slept on the sand in our tents and would be hugging the coast from here down to Beira.

Here's the route we took for some coastal riding down Northern Mozambique. From Ilha, we camped at Moma, Pebane, Quelimane and then into Beira for a total distance of 1,384 kms (860 mi). Click on it to go to the interactive version in Google Maps. 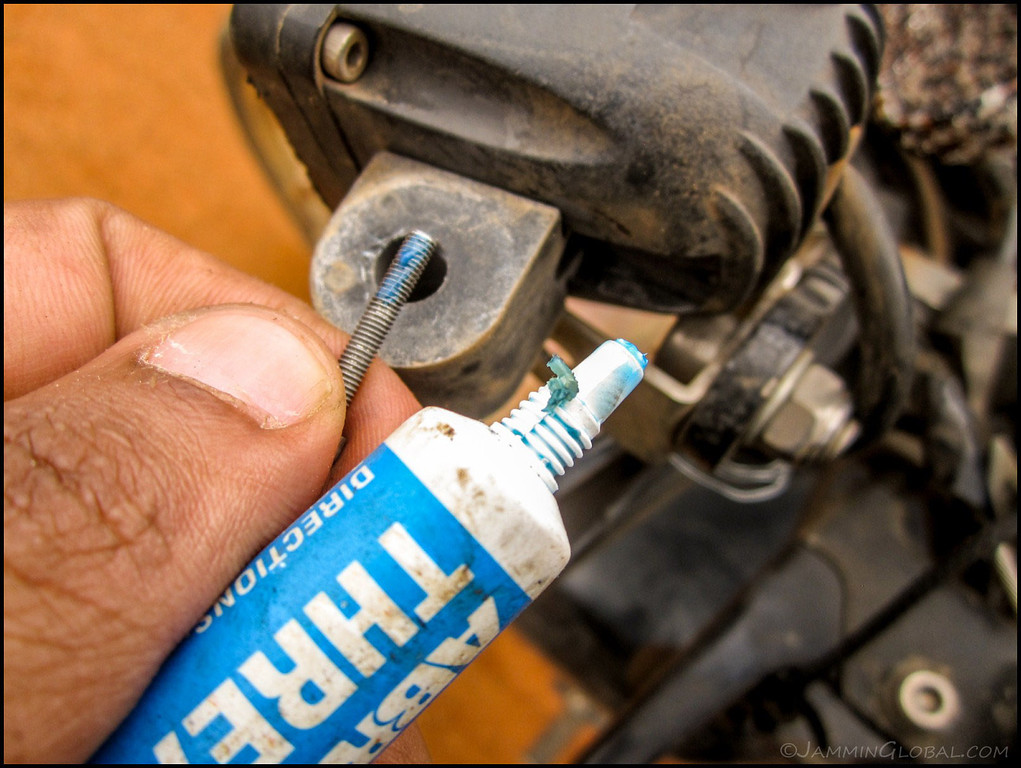 The roads started off with some heavy corrugations and one of my auxiliary Vision-X LED lights worked itself lose but nothing some thread locker couldn't fix.

At the turn off to Angoche we refreshed with some coconut water, nature's own sports drink with electrolytes, potassium and other good stuff, along with a light snack of fresh coconut meat.

Big motorcycles don't usually pass through these parts and a crowd quickly formed. Just curious faces checking us and our bikes out. 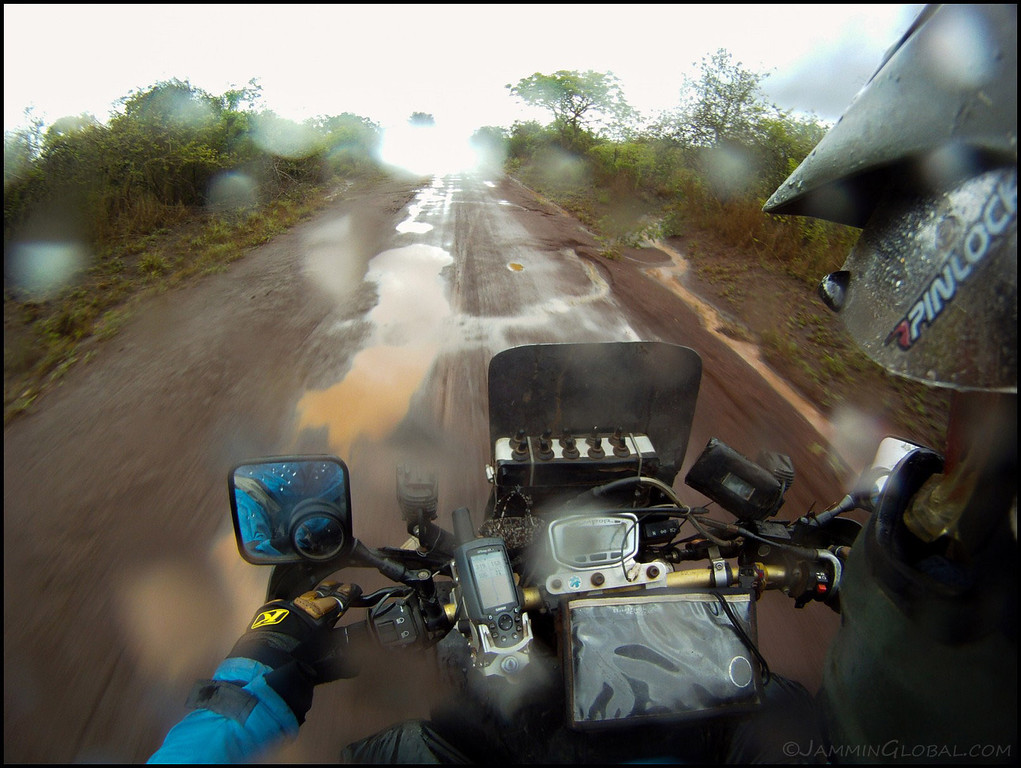 Soon after, it started to rain and Rob and I had to make a call at a turn off. We could've ditched the wet off-roading for a boring tarmac ride through Nampula but stuck to our guns and figured the rain would pass. The mud roads didn't get bad with the rain and it was actually nice to ride in some cooler temps. 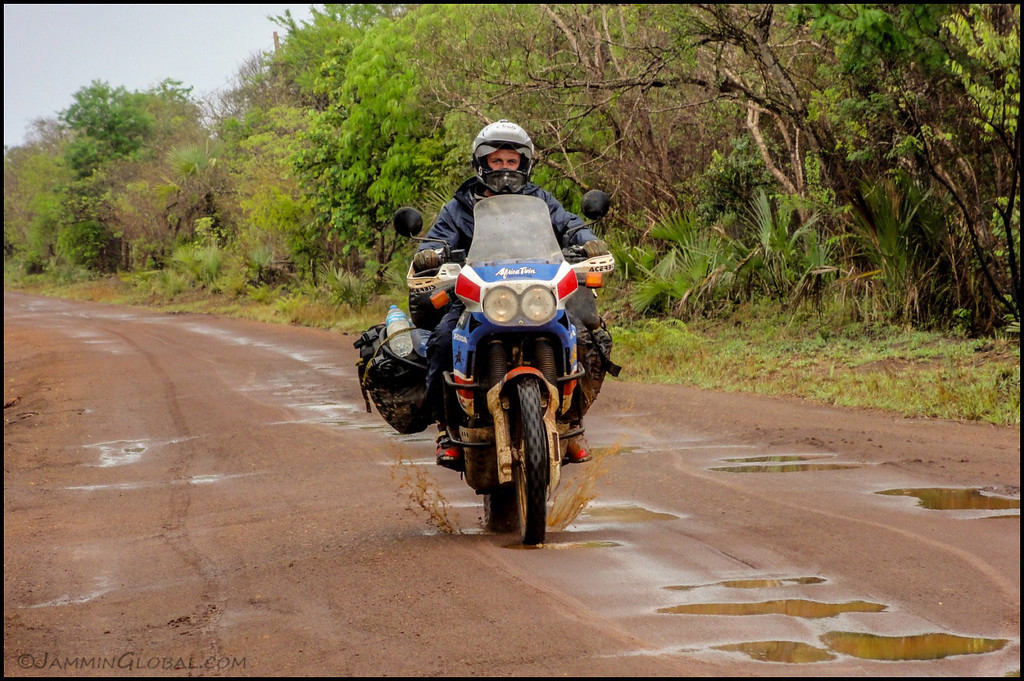 Rob on The Mule, his 1989 650cc Honda Africa Twin making splashes on the Northern Mozambican coast.

This is just a picture of a pretty road with some big trees and yes, an adventure motorcyclist riding through.

"Eh, WTF! Stop braking in the sand." Haha, poor Rob. I apologized for my inferior sand riding skills. I was leading because I had the GPS tracks but Rob was much more comfortable riding sand than I and a while back, when I came across a huge sandy section, I braked to pick the best line through and Rob couldn't stop and took a fall. Ooops, all good.

As is inevitable, whenever we stop, it's only a matter of a few minutes before passing locals stop to take in the sight of strange looking men on strange looking motorcycles. This guy was carrying quite a load himself.

He came over and then these ladies decided to stop and greet us and it was turning out to be quite a moment for them.

Our young man here took it upon himself to explain to these ladies what all the gadgets were on my bike. I can understand basic Portuguese and he was really confident in saying that my GPS was a cell phone and that box of switches was a radio. They were enjoying themselves. See, when people ask me what's the purpose of my traveling through all these places, maybe one reason can be to bring some entertainment to the locals. You bet they'll be talking about these two strange men on motorcycles for a few days to come.

We reached Moma, having covered 330 kms (205 mi), and after going around in circles for a bit, Rob came upon the still-being-constructed but also rundown Nautica Club da Moma and we could camp under this hut for 250 Meticais ($8.43). Mozambique is not a cheap country to travel through unlike its neighbors in East Africa but the journey is still worth it. For that price, we could take hot showers, charge our electronics and they even set us up with a grill and charcoal for the night.

My Oxtar TCX boots taking in the sunset from our private bay and airing themselves out after a day of riding in the rain. We sourced us a kilogram (2.21 lbs) of prawns from a Chinese prawn factory and Rob, being a professional chef at fine-dining restaurants back in Spain, set about grilling them and served them with garlic butter and my contribution of a chili coconut rice and miso soup.

The ladies ready for another day of off-roading down the Mozambican coast. 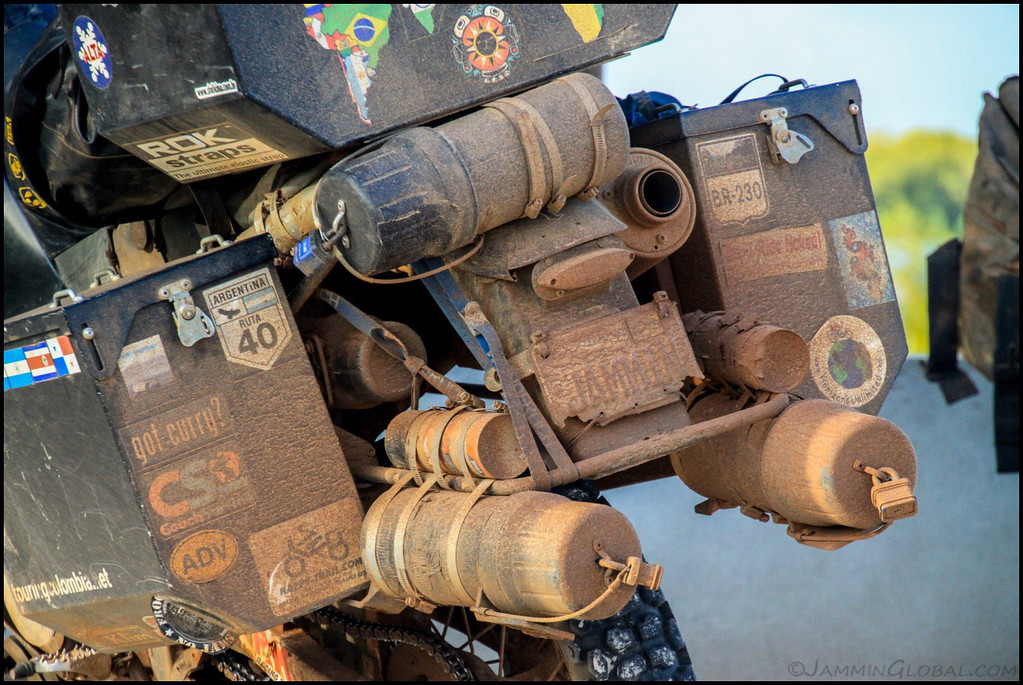 sanDRina, just the way I like her - covered in mud. 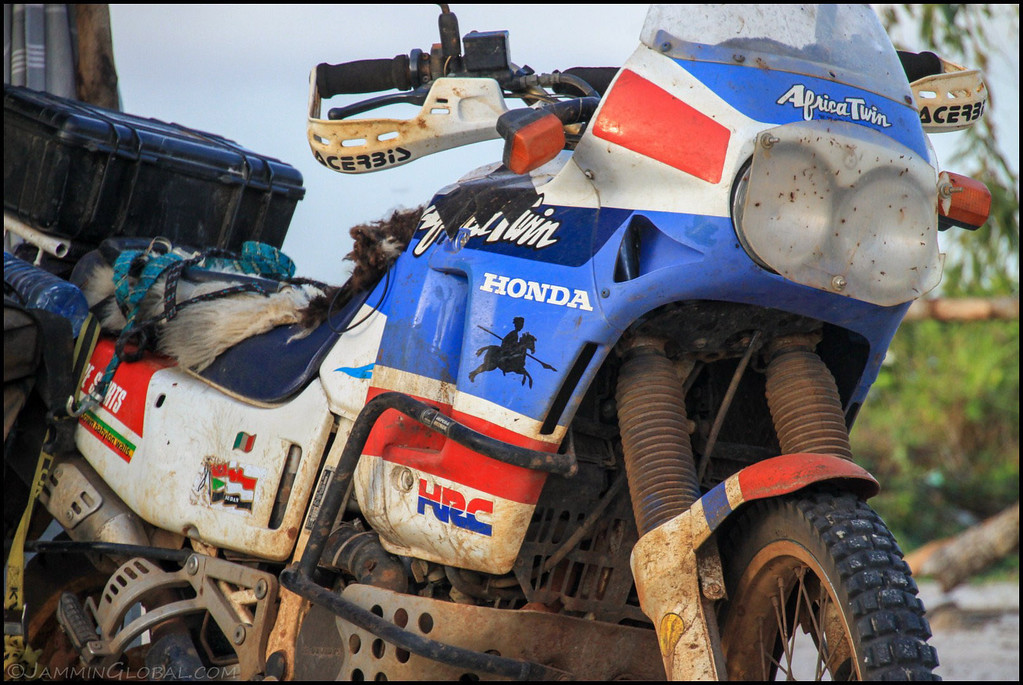 Rob's Africa Twin looking well-traveled. This bike was the preferred steed for world travelers in the years past but has now been pushed aside for all the new fancy adventure bikes coming out. Unlike the DR with its single-cylinder engine, this one has a V-twin, which changes the character of the riding machine. The Africa Twin was never sold in North America, so it wasn't even an option when I was choosing a motorcycle for my trip. But they say Honda's working on a new Africa Twin for all markets.

My one-man Catoma Twist tent, which is basically just a self-supporting mosquito net that comes with a rain cover. The winds were very strong at night and I had to tie the tent to the poles. It's small but comfortable enough and being compact when packed, it's not a bother in my luggage. 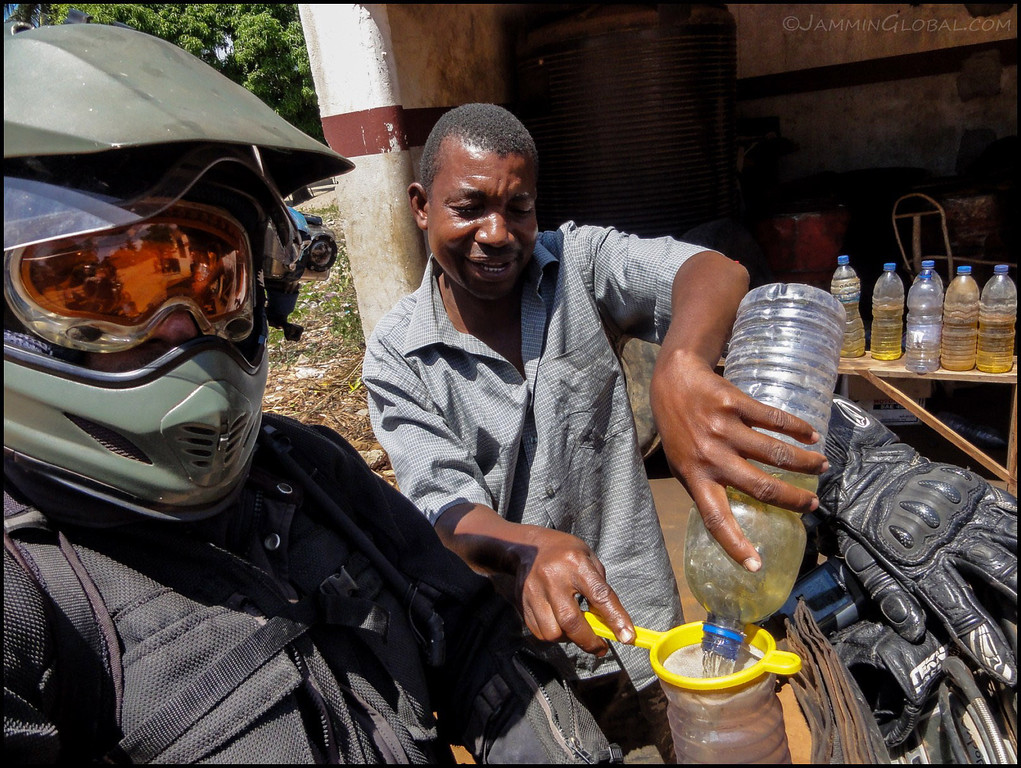 Fueling up in Moma before heading out for the day. Petrol being filtered by a coffee strainer. The good thing about traveling with these old school motorcycles is that they're not fussy about the quality of fuel.

Rob gave me a few tips and I was now really enjoying to ride in the sand. All it takes is more throttle to let the motorcycle do what it's designed to do - keep itself upright. It's only when the user forces unnatural inputs through a jittery hand that the front wheel wobbles and topples the rider. 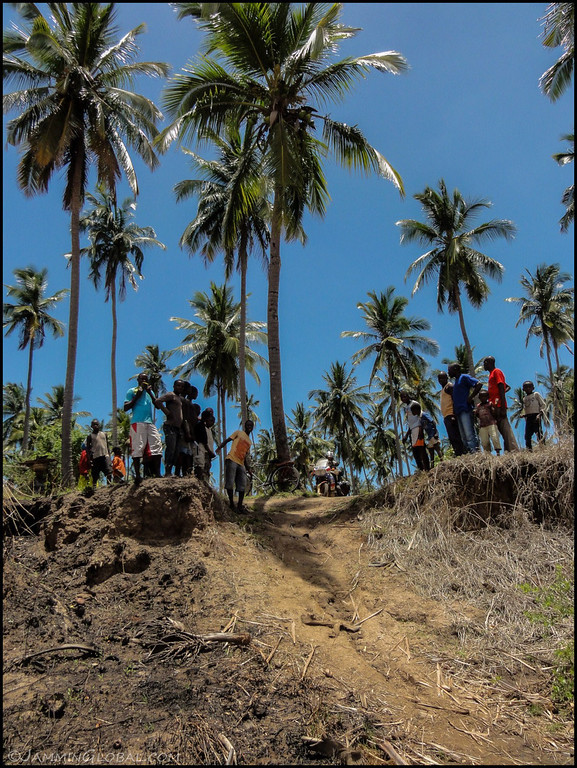 We heard from the petrol guys in Moma that a bridge was out and we would have to take a detour and my Tracks4Africa GPS Maps also confirmed that. So, here we are getting down into...

...a super wide estuary. It was sandy near the banks but...

...there was lots of water to cross to get to the other side. Rob is scouting the best path across.

These locals jumped into the chance of guiding us across so we made them walk a path to judge the depth of the water.

We rode through with no issues and crossed maybe 200 m (650 ft) of shallow water. We're taking a break here at the middle of the entire crossing. It was only at the last water crossing, which was very deep resulting in a big splash, that we finally tasted the water and realized it was salty! Oh no, this was not a freshwater river but actually a salt water estuary. Great, we just basically bathed our bikes and our gear in salt water. Salt - the nemesis of steel and the harbinger of rust. But meh, what's done is done, we'll wash them later.

We followed our local guides and took these footpaths to get back to the main road. And just when we got there, we saw that a truck had crossed the supposed missing bridge. Rob and I looked at each other and laughed in realizing that we had just had a crazy adventure through salt water for fun. Makes for a good story and we shot some great video. 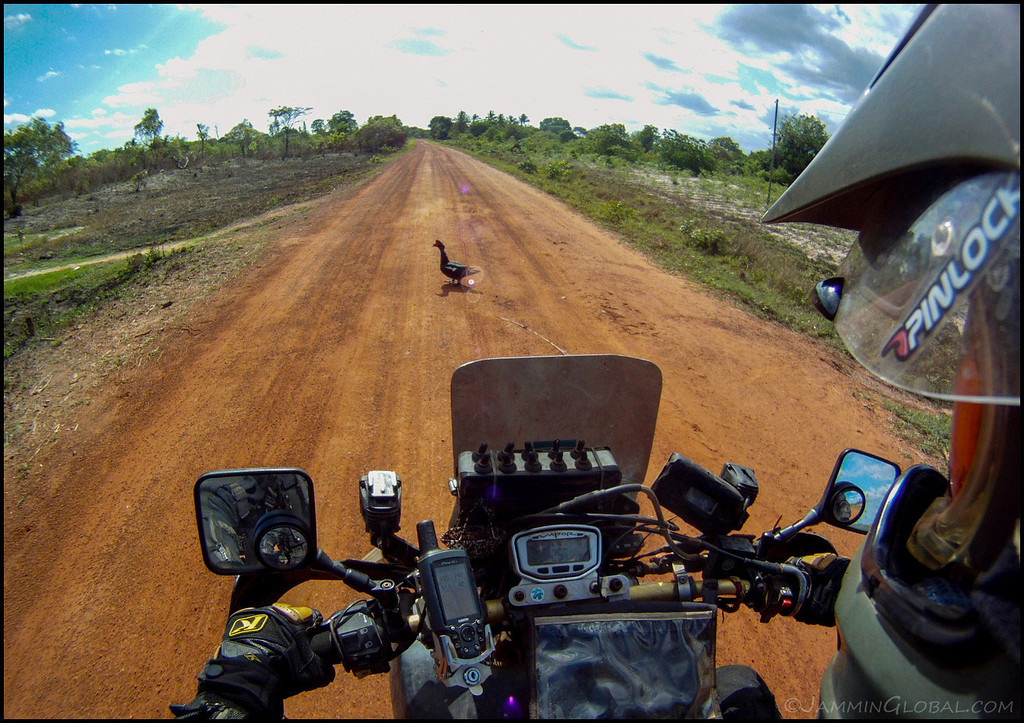 After some technical riding in and around huge, muddy potholes, the road got better but the riding was challenging with the constant traffic. Not on-coming traffic, but cross traffic. Chickens were the worst because they're so scatter-brained. I much prefer duck crossings because once they commit to crossing, they will follow through with their waddle. Humans on bicycles were just like the chickens - freaking out upon hearing us thundering down upon them.

Seeking shelter from the strong sun under the shade of the vast cashew tree plantations. Cashew nuts are a premium product with a large profit margin but all the plantations are under the control of the local mafia with none of the benefits going to the locals who live in and around them.

Enjoying the off-roading down Mozambique's coast.

But it was tiring riding as when the road was not technical, it was covered in corrugations, which take a beating on the human body. Come on, Rob, just a few more clicks until the day is done...
_

Next: Mozambique, Part 5: Coastal Riding and Wild Camping at Pebane