After my little break on the shores of Lake Malawi, I headed east, across the remote region of Niassa Province towards Pemba, on the coast. Mozambique is developing quickly with the Chinese laying new roads everywhere and the route that heads east from Lichinga to Pemba was in varied states of construction. The middle portion, the farthest from civilization on both sides, is still a little track through the forest that I highly enjoyed. The rainy season was fully underway now and I sought shelter from a fast-moving thunderstorm with some villagers in their hut. The track was either hard-packed mud, that turned slippery when wet, or sand, which was surprisingly easier to ride when wet. I emerged back into civilization on the other end and headed for Pemba, where I enjoyed fresh squid and octopus. 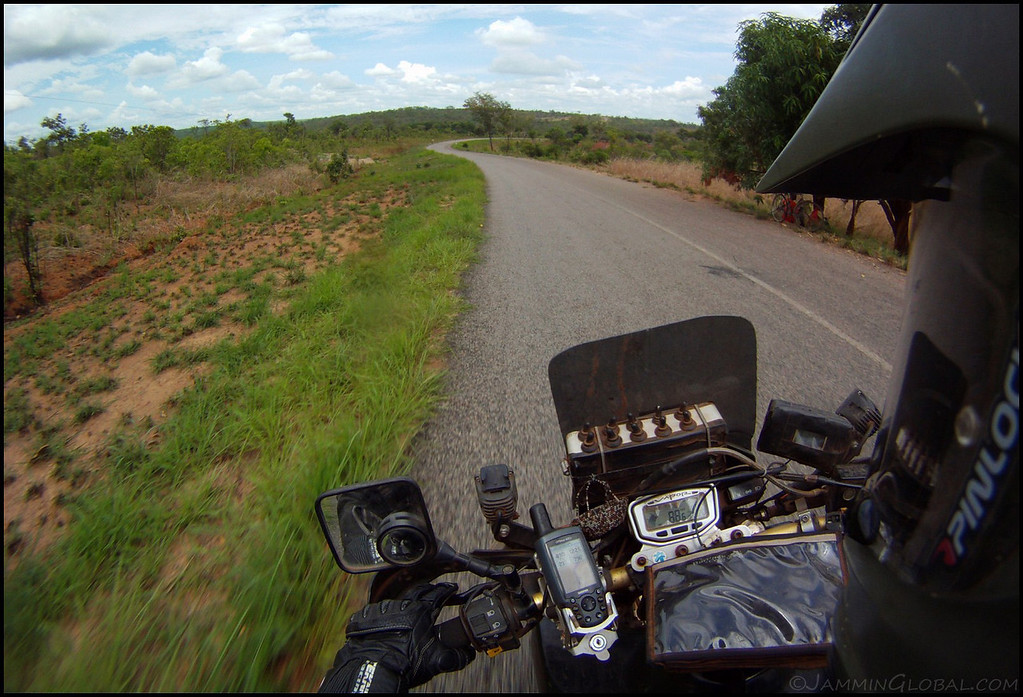 Heading east out of Lichinga and enjoying the twists and curves in the mountainous north of Mozambique.

Panorama of the distractions that a rider through Niassa Province experiences. Click here to see the high resolution version.

I was in the thick of the rainy season. It comes in quick and then moves on. I just missed the rain here and got my tires wet to increase their mileage ever so slightly.

The grand inselbergs that dot northern Mozambique. These are remnants of old volcanoes where the outer rock has eroded to the form the surrounding plains and the inner, harder rock, usually granite is left behind to stand proud.

A woman ploughing her farm under the shadow of an inselberg.

Quite a dramatic setting to have in your backyard. Can you see the creature in the inselberg? There are two eyes on the small head and a slanted mouth.

That same inselberg from another view, showing that seeing faces in inanimate objects is just a trait of the human mind, as we're hard-wired to pick out faces.

A view into the distance with a jagged horizon of inselbergs in various poses.

Ooh, an elephant crossing sign, telling me that mama and baby elephant only cross in curves, ok, so on the straights I'm good.

Mango season is in full bloom and I passed numerous trees with brightly-ripened, juicy mangoes, just waiting to be picked or thrown at by kids.

The only hotel in Marrupa, a small town about a third of the way to Pemba. This basic residencial went for 400 Meticais ($13.50) and came with a hot water bucket bath.

I was walking around town and came across these guys playing a Mozambican version of the age-old game known as Bao or Mancala. The rules are quite complicated but the general idea is to sow and capture seeds. The earliest evidence for this game comes from northern Ethiopia and then it got picked up by the Arabs who introduced it into East Africa and other parts of the world.

The vegetable market in Marrupa with only the basics of onions, tomatoes and beans.

I was buying some bread and noticed these guys playing a game of checkers. Nice use of bottle caps.

On the road after a good breakfast of oatmeal. The section of the route from Marrupa to Montepuez is currently under construction, meaning, get out and ride the world before it all gets paved over! Click here to see the high resolution version.

Road construction through forests and rainy seasons don't go together. Riding the detour from the newly laid roadbed on the right. 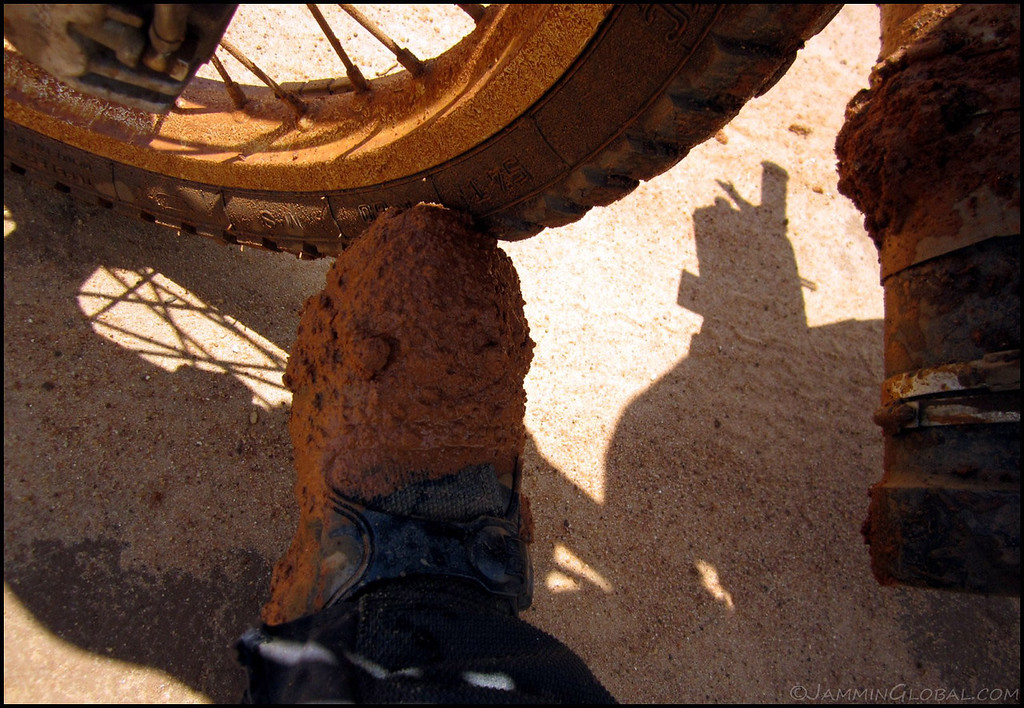 African Mud. It's good for the boots.

A wide puddle but it looked shallow, so I just went for it.

The construction petered out and I was smiling end to end as the road became a small forest trail. It was getting close to mid-day and these cumulonimbus clouds were heading for my path.

sanDRina in the forests of Northern Mozambique. There was hardly any traffic on this route, evident by the grassy, center berm. I loved being amongst such tall trees but it saddened me that they would be chopped down soon to make way for progress. 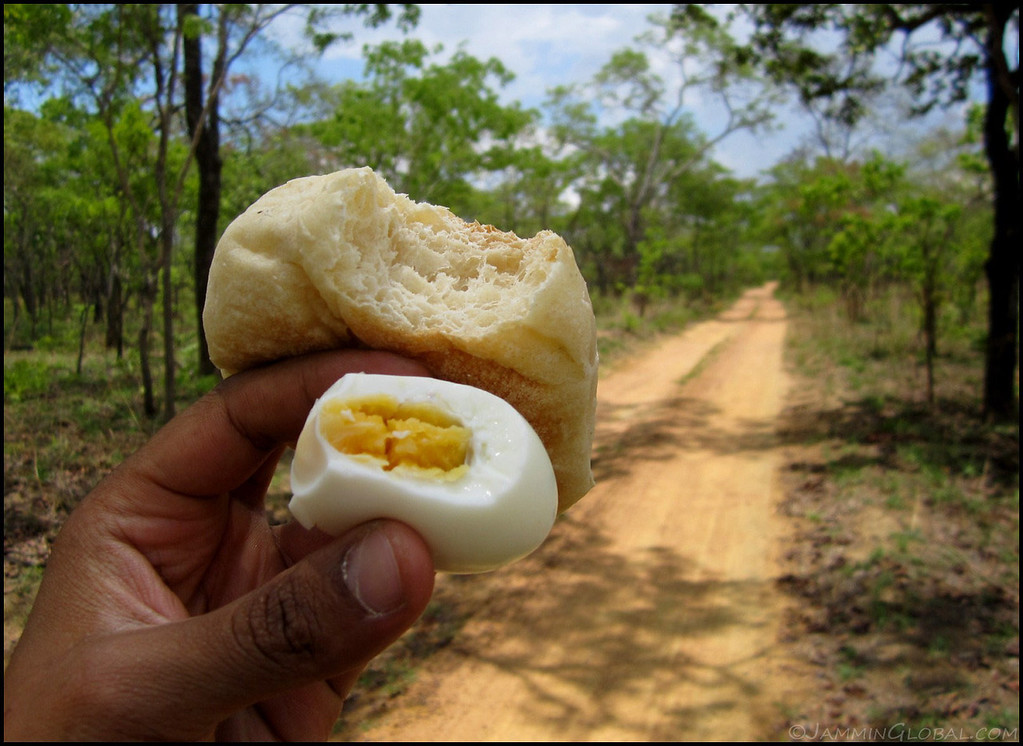 Having a lunch of soft-boiled eggs and buns. I made these eggs in the morning and like to boil them for 5 to 6 minutes to get the yolk into a semi-solid state.

Just as I was finishing up lunch in the middle of the forest, rain drops started falling. I packed up and got moving and rode through a fair amount of rain. The route was sandy but when it got wet, it actually became easier to ride.

Riding through rain is not a problem but I'm a bit wary of lightning and this one thunderstorm was throwing down the electrical shards ahead of me and I thought best to wait it out instead of riding through it. I pulled up in this little village and asked in my basic Portuguese if I could just take a break here. A few minutes after getting inside this hut, the storm hit and the rain came down heavy. 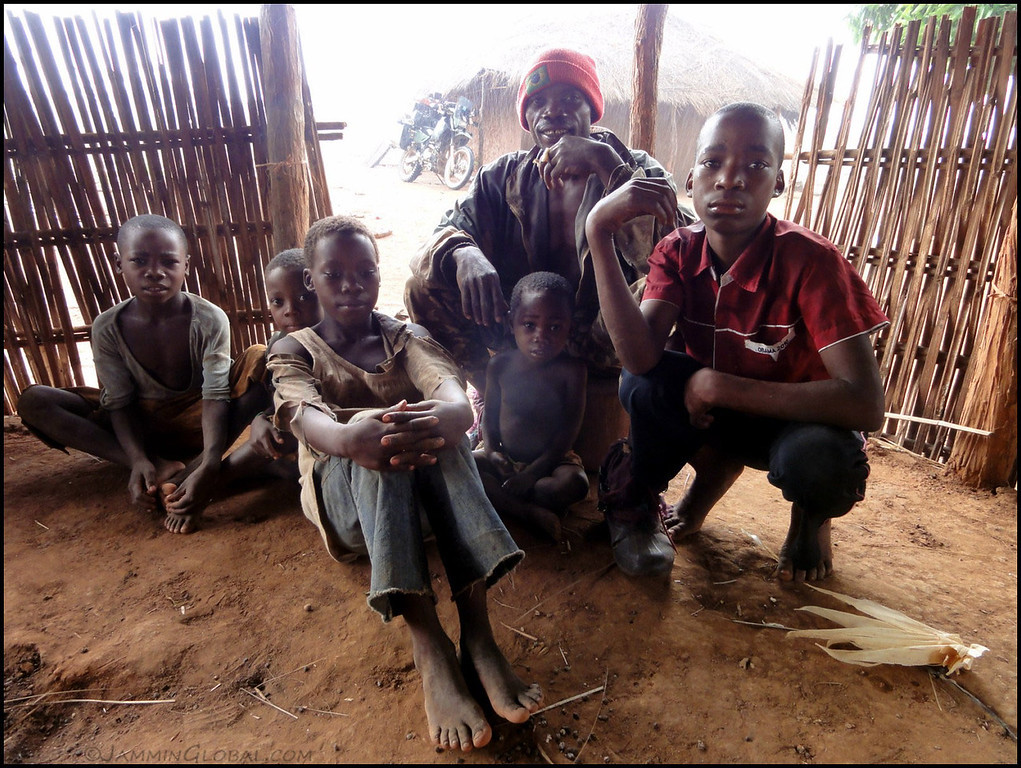 The villagers who let me stay in their hut during the storm.

The kids were thrilled to see this strange man and his strange motorcycle make a stop in their village.

I presumed this man was the village head and this boy, who was the best-dressed there, was his eldest son.

The kids were all shy of my camera at first, but once I took one picture and showed it to them, they all loved it and wanted to get in every shot. Here, they're eating some left over nshima and beans after an adult was through with his lunch.

Look into his eyes as he reaches for his next hand-full of nshima. This kid looked to be the smartest one and I thought about how geography (where you are born on this planet) plays such a critical role in determining who gets what kind of chance in this world.

Twenty minutes later and the thunderstorm had passed with sunshine in its wake. Click here to see the high resolution version.

Saying goodbye to the mamas of the village.

And one last shot of all the kids.

Back on the trail with the sun beating down and you can't even tell that it just rained so hard.

Oops. I was riding through this sandy riverbed and didn't see that wooden spike sticking out of the ground. It caught my tool tube and down we went. A few guys came running out of the woods and helped me lift sanDRina back up with the rubber side down. 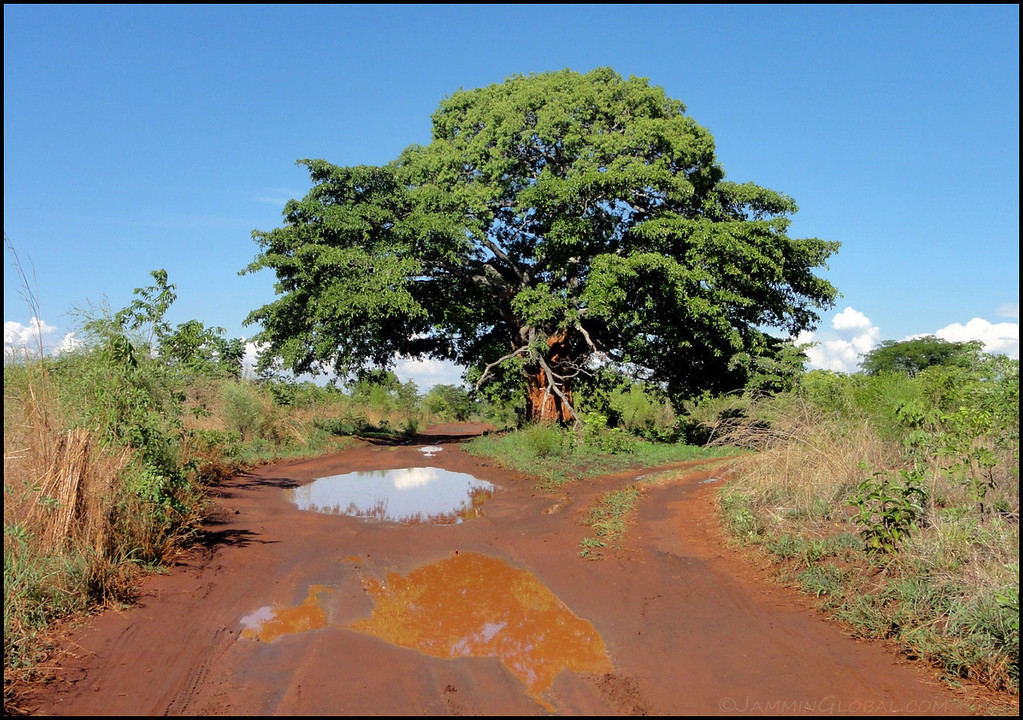 Evidence of the recent rains. Where the puddles were huge, a side track was cut into the brush.

Riding lots of corrugations and I noticed a bolt for my pannier frame had rattled out.

I found a replacement M6 bolt from my bag-o-bolts, put a dab of Loctite thread-locker and off we go. 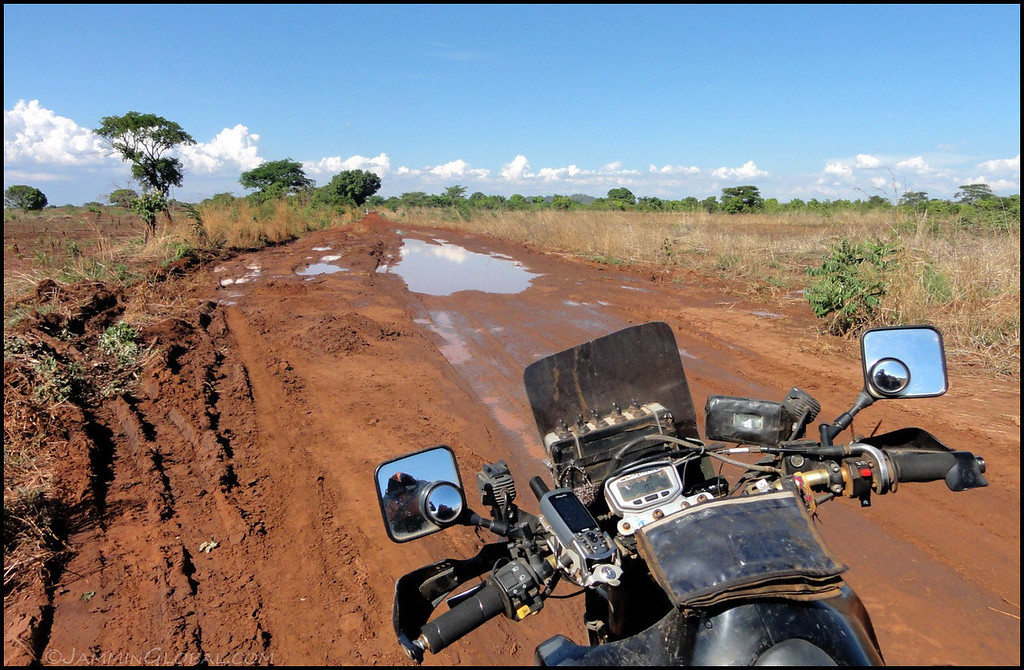 A long and messy mud puddle with an even messier detour. I went a bit back and made my own entry into the detour.

Camping in a cheap residencial in Montepuez, a large town on the other end of the forest track. The beds were creaky and the mattress didn't look inviting and there was no mosquito net, so best to setup my tent, which is a home I know. 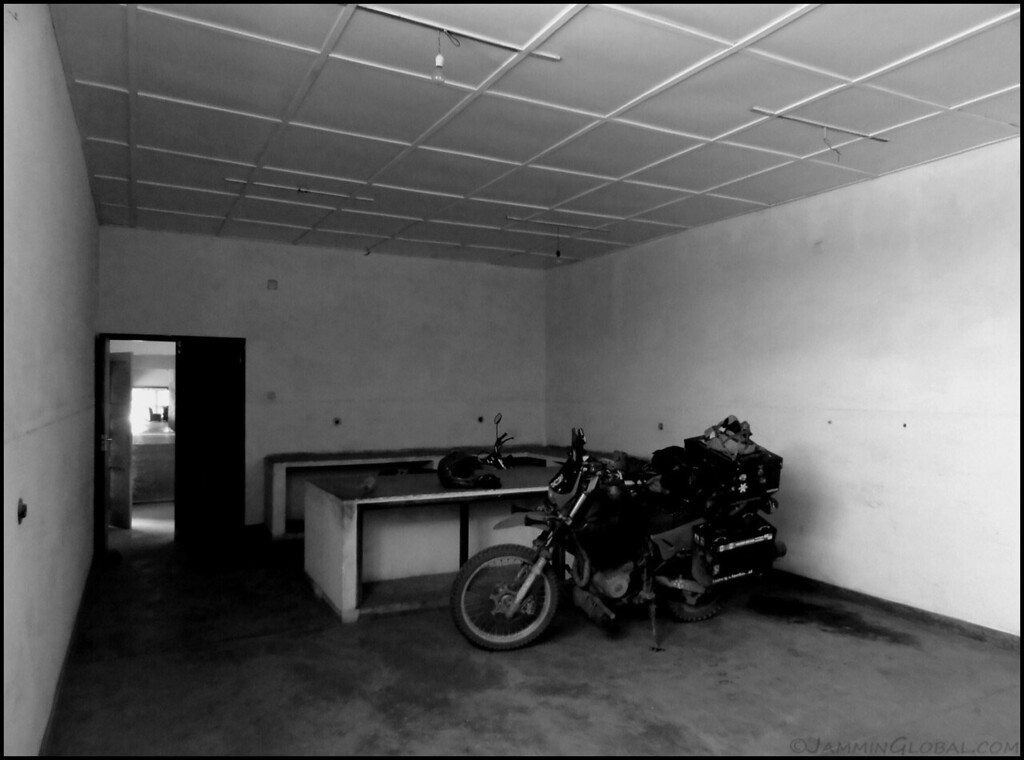 At least sanDRina had a nice place to spend the night in Montepuez. The next day's ride was short and easy, heading down to the coast.

A big baobab tree just across Russel's Place in Pemba with the clear waters of the Indian Ocean.

Russel's is a backpackers and is the cheapest place to stay near the ocean. I took a bed in this elevated hut for 500 Meticais ($16.85). I was slowly adjusting to the higher prices in Mozambique compared to neighboring East Africa.

I met another biker who was also staying at the same place and we both headed out for some fresh seafood. We bought this squid, which was caught just a few hours ago, for 250 Meticais ($8.43) and...

...this lady here cut and grilled it up for us for another 30 Meticais ($1). She also had a supply of beers and chapatis to go with it. The breeze was blowing strong and the atmosphere was fantastic. 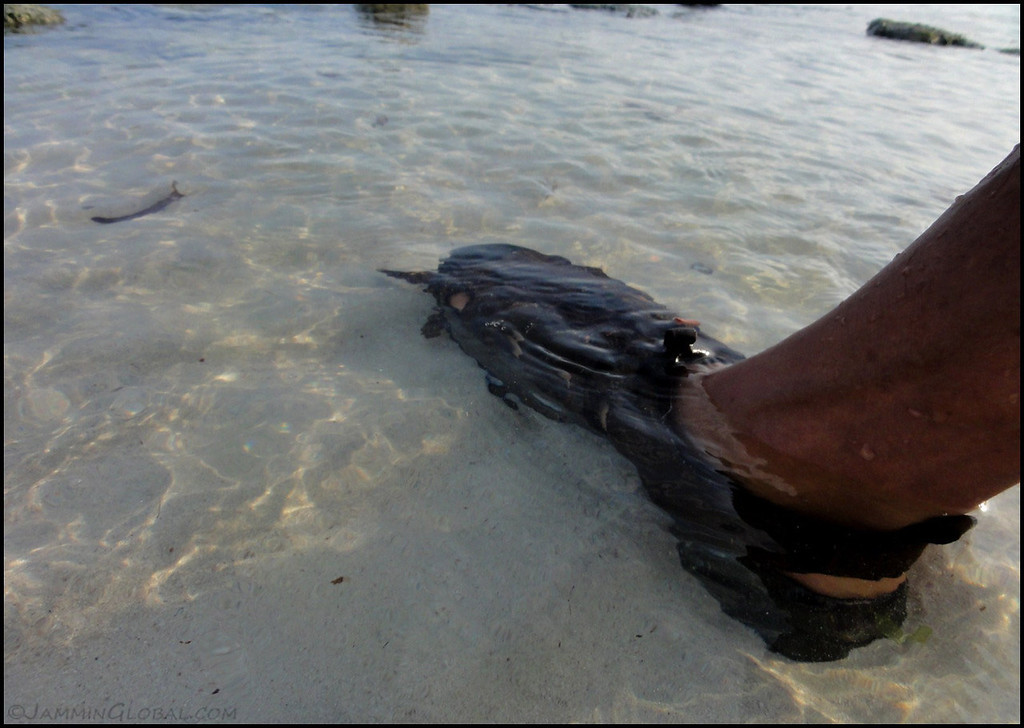 Enjoying a walk through the water and making my connection with the Indian Ocean. This was the first time sanDRina's been at sea-level since entering Africa at Alexandria.

Shopping for seafood for dinner the next night. 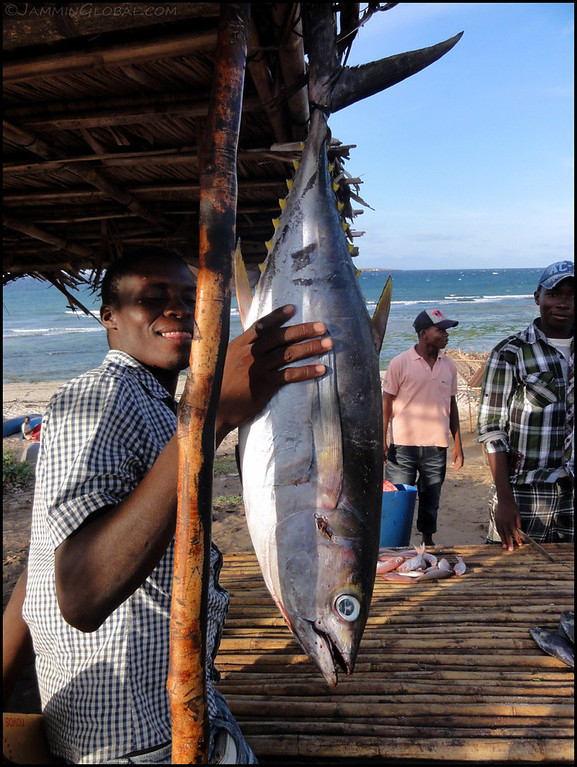 He had this yellow-fin tuna going for around $30 and I thought about how much 'value' and price is added to food as it moves from where it is caught or harvested to where it is consumed. Here, we were consuming it where it was caught. Nothing fresher than that. 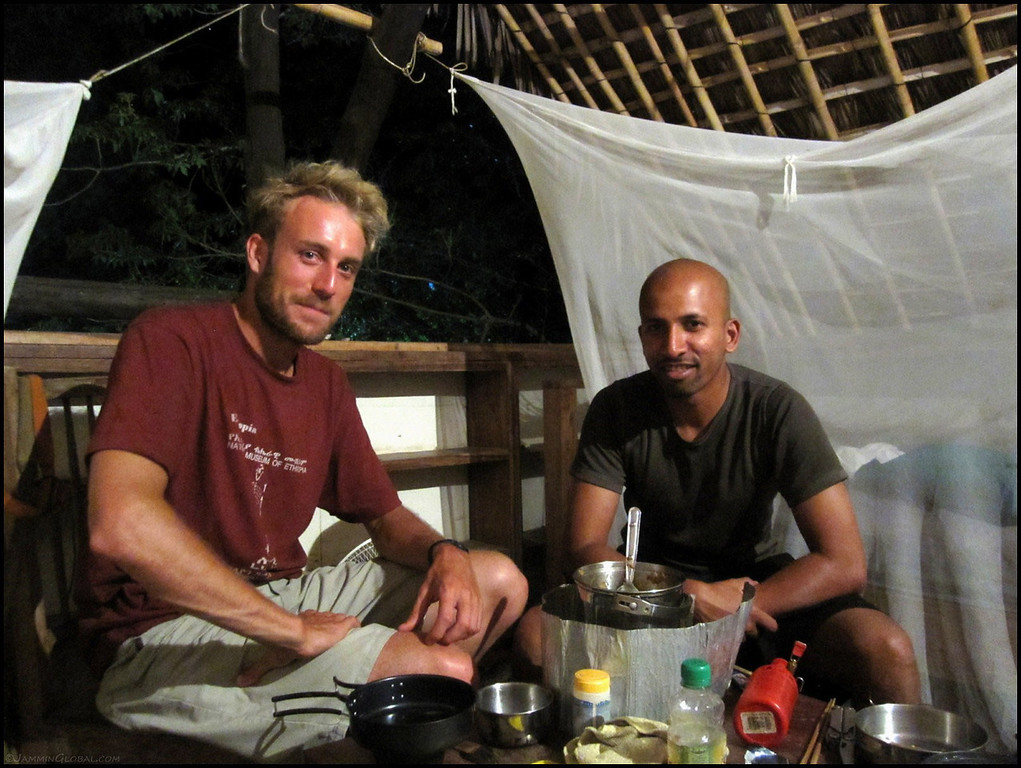 This is Rob, the biker I met at the backpackers. He's from South Africa but was living in Spain and was riding his Honda Africa Twin from Barcelona to Durban. Rob's a professional chef and was working at some of the top-rated restaurants in the world, such as El Bulli, where plates go for around 250 Euros. So, we put our cooking gear together and made an... 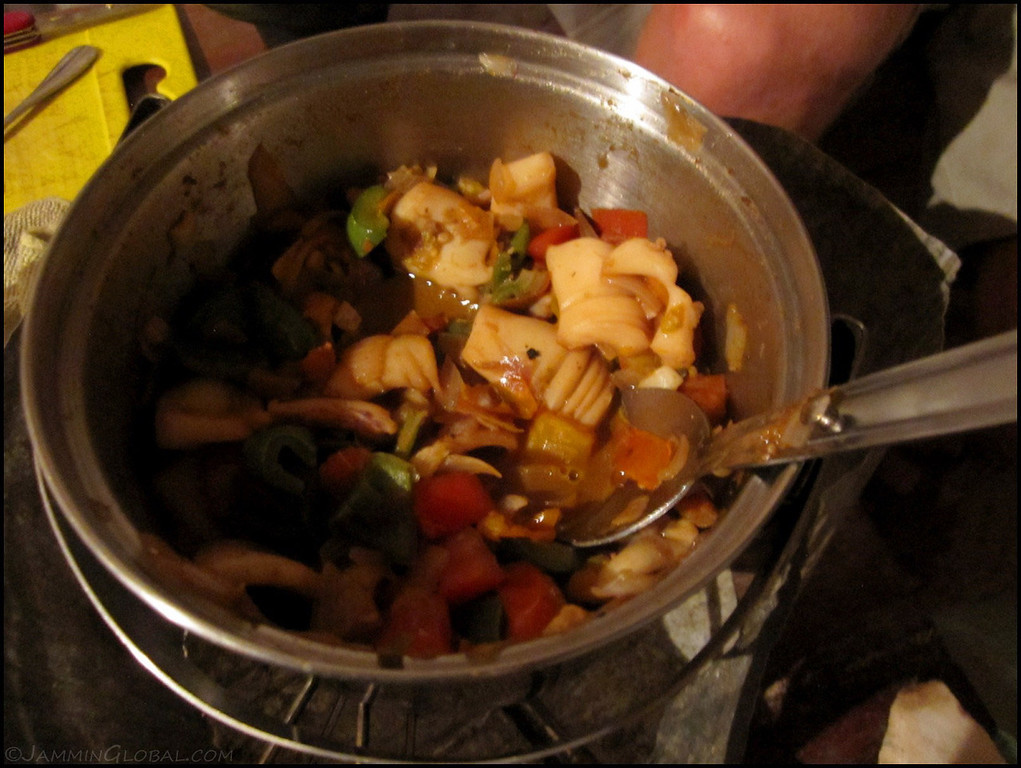 Next: Mozambique, Part 3: A Visit to Ilha de Moçambique, An Enigmatic Island