After my extended stay in East Africa, it was finally time to enter Southern Africa. Mozambique has been a country that I was really looking forward to experiencing after the many positive things other travelers have said and also because it's a Portuguese-speaking country. My travels through Brazil developed my love for the Portuguese language and I've been earning to speak it ever since I left South America.

Mozambique was first introduced to Portuguese culture when Vasco da Gama made landfall on his way to India in the 15th century. As other European powers were gobbling up Africa, Portugal kept a hold of Mozambique, Angola and Guinea-Bissau. After a long struggle, Mozambique finally became independent in 1975 but quickly plunged into a deadly civil war that ravaged the country till 1992. Since then, the country's been growing fast but there's a huge gap between the north and the south. Mozambique is a big country, stretching 3,000 kms from Tanzania to South Africa and most of the development is taking place in the south. This is the reason I traveled only in the north of the country. I like rural and rustic places and I found plenty of that in the friendly north.

Come with me into a country of beautiful landscapes, friendly people and tasty seafood... 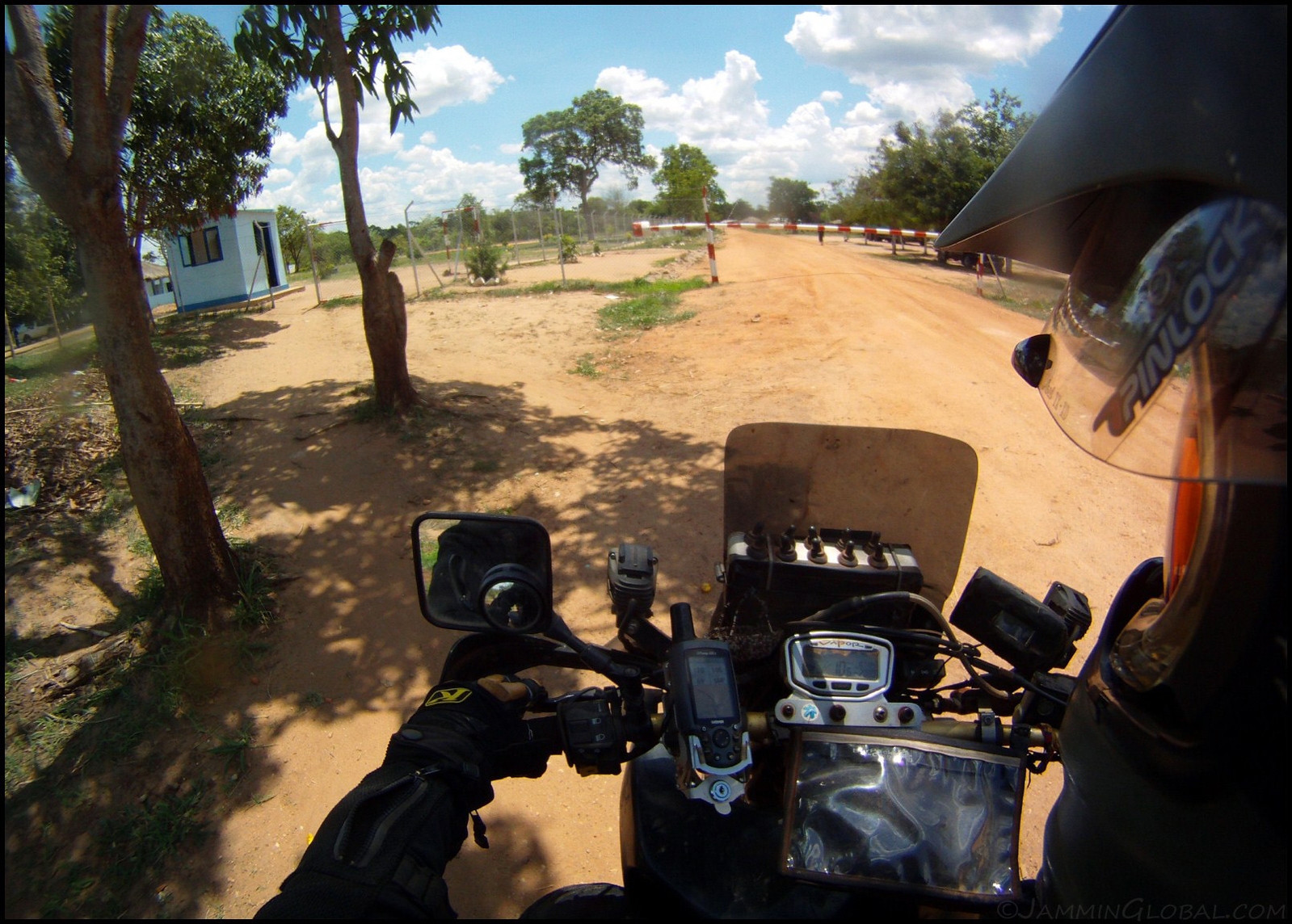 Entering Mozambique at the remote border of Matchedje across Rio Ruvuma.

I love small border crossings. There's no hassle and the officers are more friendly. Here, this customs agent wasn't too sure how to process the carnet for sanDRina and I'm showing him that he has to tear off the bottom portion and keep that and then the middle portion will be taken when I exit the country. Thanks to GoPro for the hidden camera shot.

My route through Mozambique. I entered from Tanzania, near Lake Malawi, and then cut across Niassa province to Pemba on the coast. After a visit to historic Ilha da Mozambique, I had a nice ride along the coast down to Beira. Then, I turned inland and passed through Tete on my way to Zambia. Click on it to go to the interactive version in Google Maps.

With the border village of Matchedje behind me, I had 60 kms (37 mi) of sandy, forest riding till the next human settlement. The road had no traffic on it besides me and one minibus, called a chapa, here.

Taking a break in the shade and letting my bones and sanDRina's suspension relax from the corrugations. Click here to see the high resolution version.

When there were no corrugations, the road became sandy. At first, the sand wasn't a problem and I could stand through it, but...

...it soon became quite deep and once I lost my momentum, it was tough to get back up to speed.

Frequent breaks to cool down and...

...enjoy the solitude of the forest. 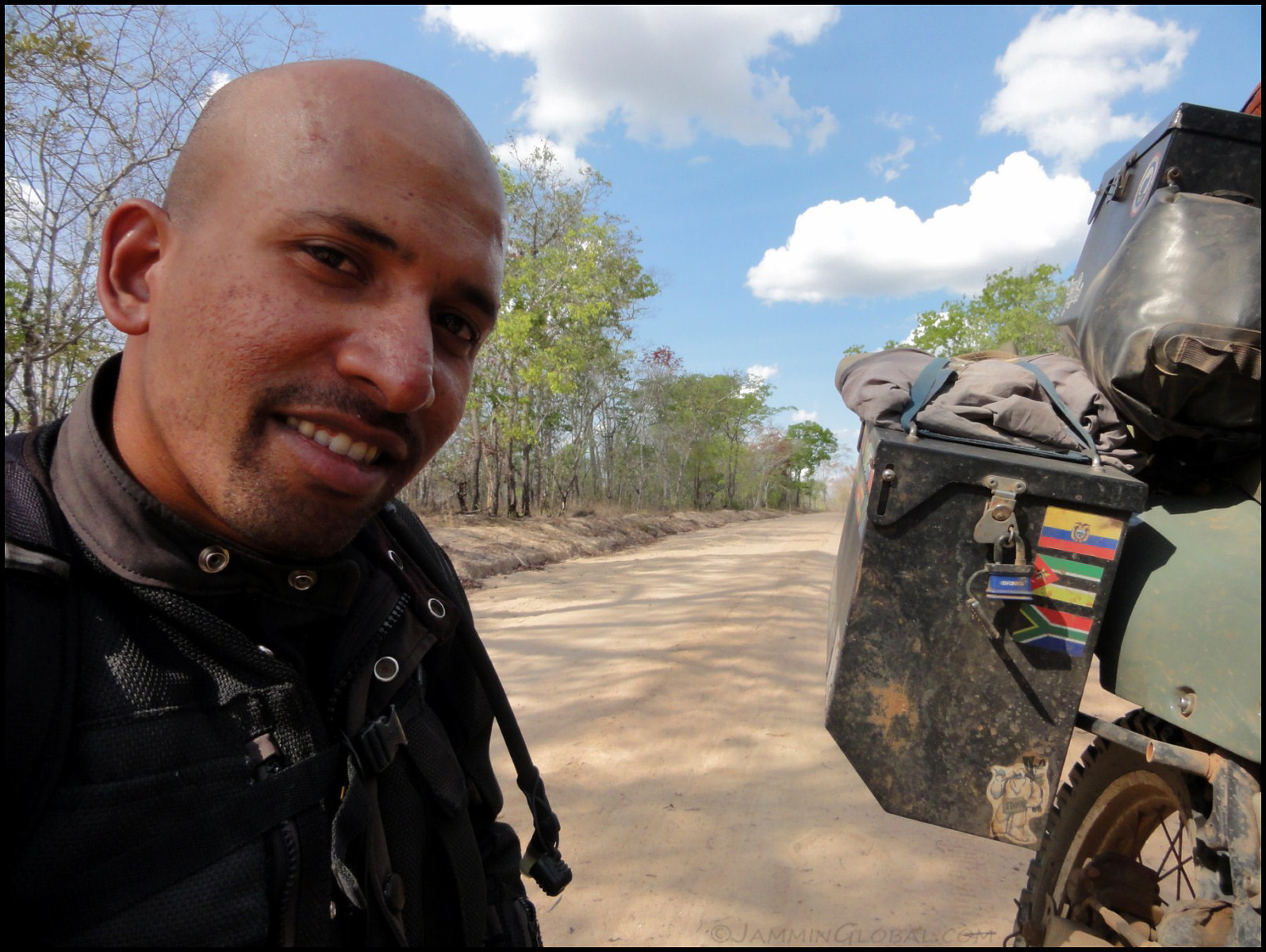 Enjoying my first day in Mozambique.

Those 60 kms were slow-going and I started to look for a place to stay for the night.

The first village from the border was Novo Madeira and I pulled up to this official-looking building.

I introduced myself, in Portuguese, to the officer on duty, Mr. Roman, and asked if I could pitch up my tent in the back. He said, no need, there's a spare bedroom at the back that I was free to use. How nice. This was the only government building in the area and behind the offices at the front was a guest house for passing officers and I guess, adventure travelers.

The sleepy village of Nova Madeira where the residents all had a patch of forest land that they farmed for their sustenance.

Roman was a customs officer with military training and excused himself to carry out his evening workout.

He then invited me for 'jantar,' the Portuguese word for dinner. He first fried up some eggs... 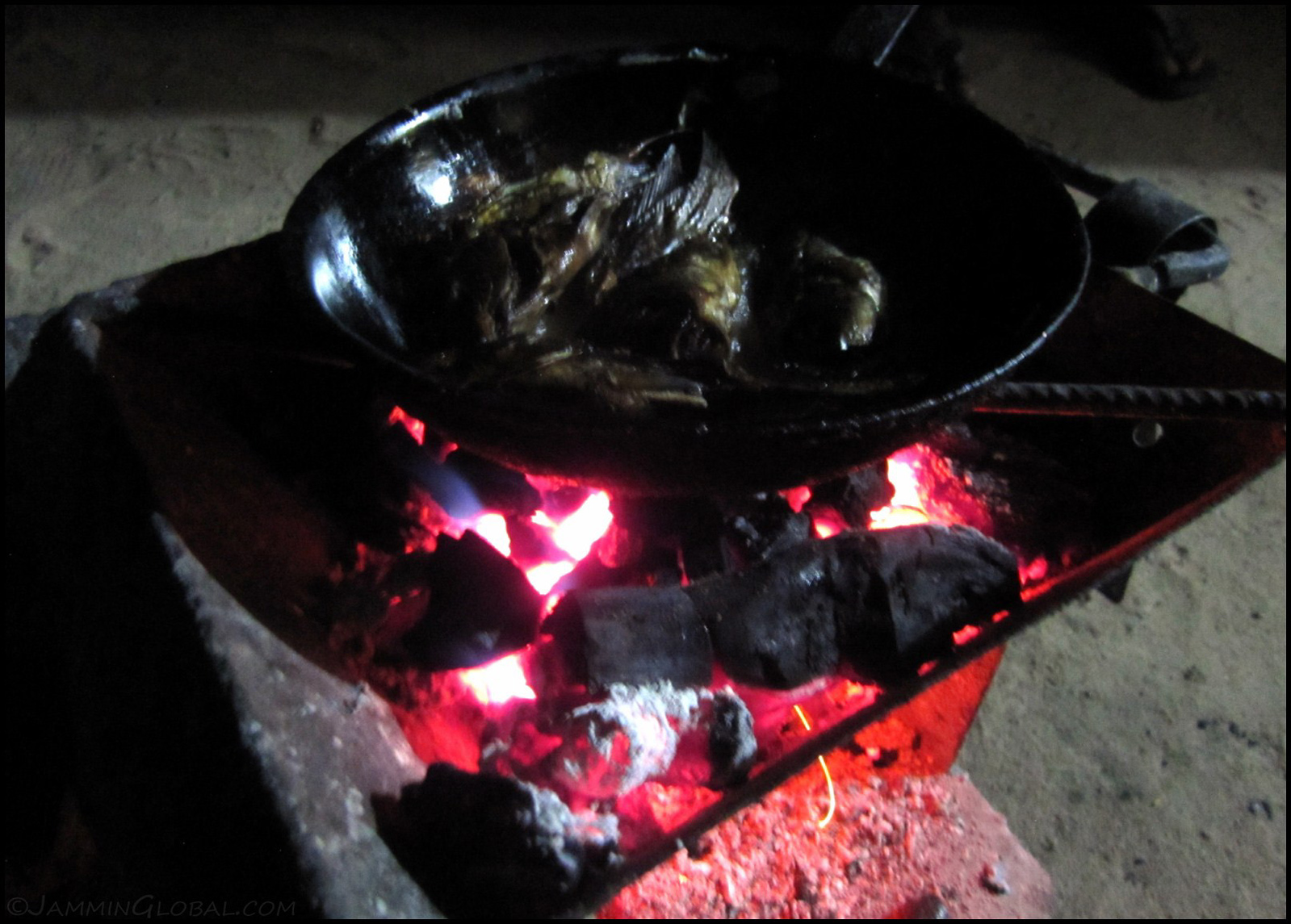 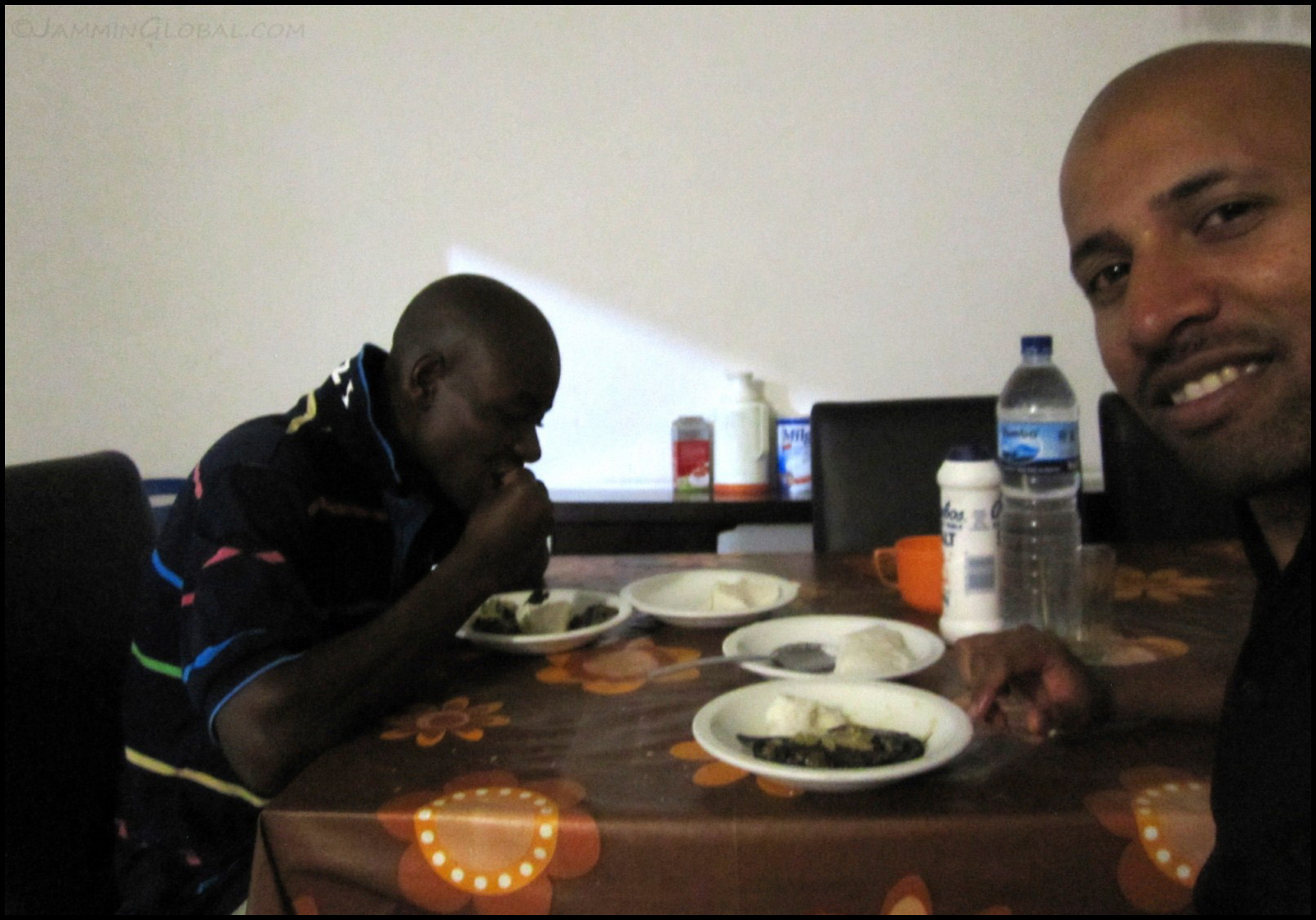 ...that we had with nshima (maize meal porridge). He was a very pleasant man and was impressed with my Portuguese that was coming back to me very quickly. I had listened to my Michel Thomas language lessons recently and being immersed was releasing my knowledge of this language. We sat out under the stars and he asked why the stars near the horizon twinkle more than ones that are straight above. In my basic Portuguese, I managed to convey that the light from stars near the horizon have to travel through more air (atmosphere) than the ones straight above and that's what makes them twinkle more.

There was no mosquito net, so I put up my tent on the bed and had a restful night.

Leaving the next morning and I enjoyed the overcast sky as it kept the temps in check.

Thanks for the stay, Roman. What a great first impression of Mozambique. 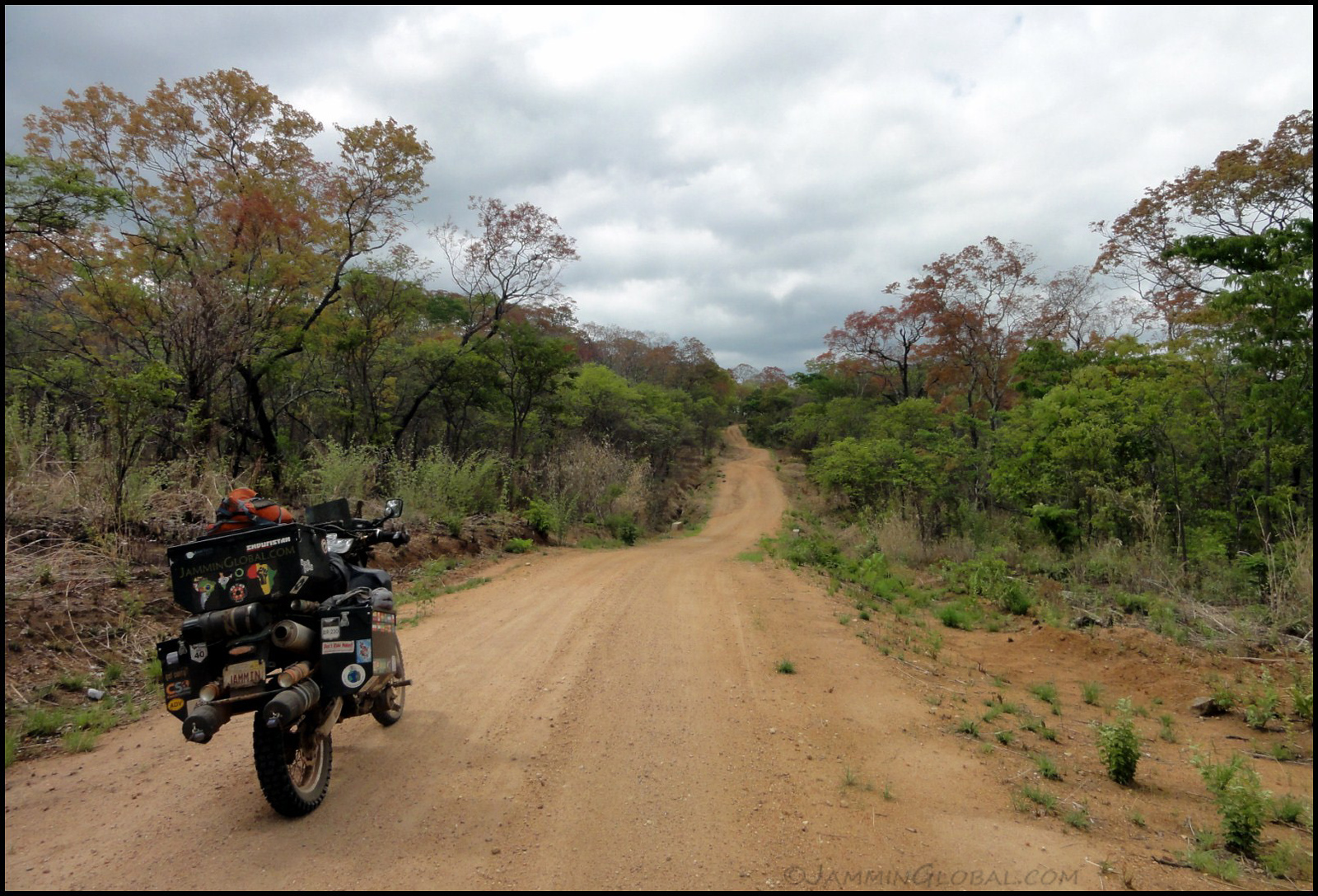 Heading south on a hard-packed mud road and enjoying the curves and dips and climbs.

The forest ended and the land was taken over by farmland but the horizon was exciting with mountains all around. Click here to see the high resolution version.

Panorama of the ride with some jagged peaks in view. Click here to see the high resolution version.

The mountains of Northern Mozambique.

A shot of my GPS and a basket from a friend in Kenya.

I hit the pavement near the town of Lichinga and aired up the tires with my CyclePump.

A single lane tar road took me through villages and then... 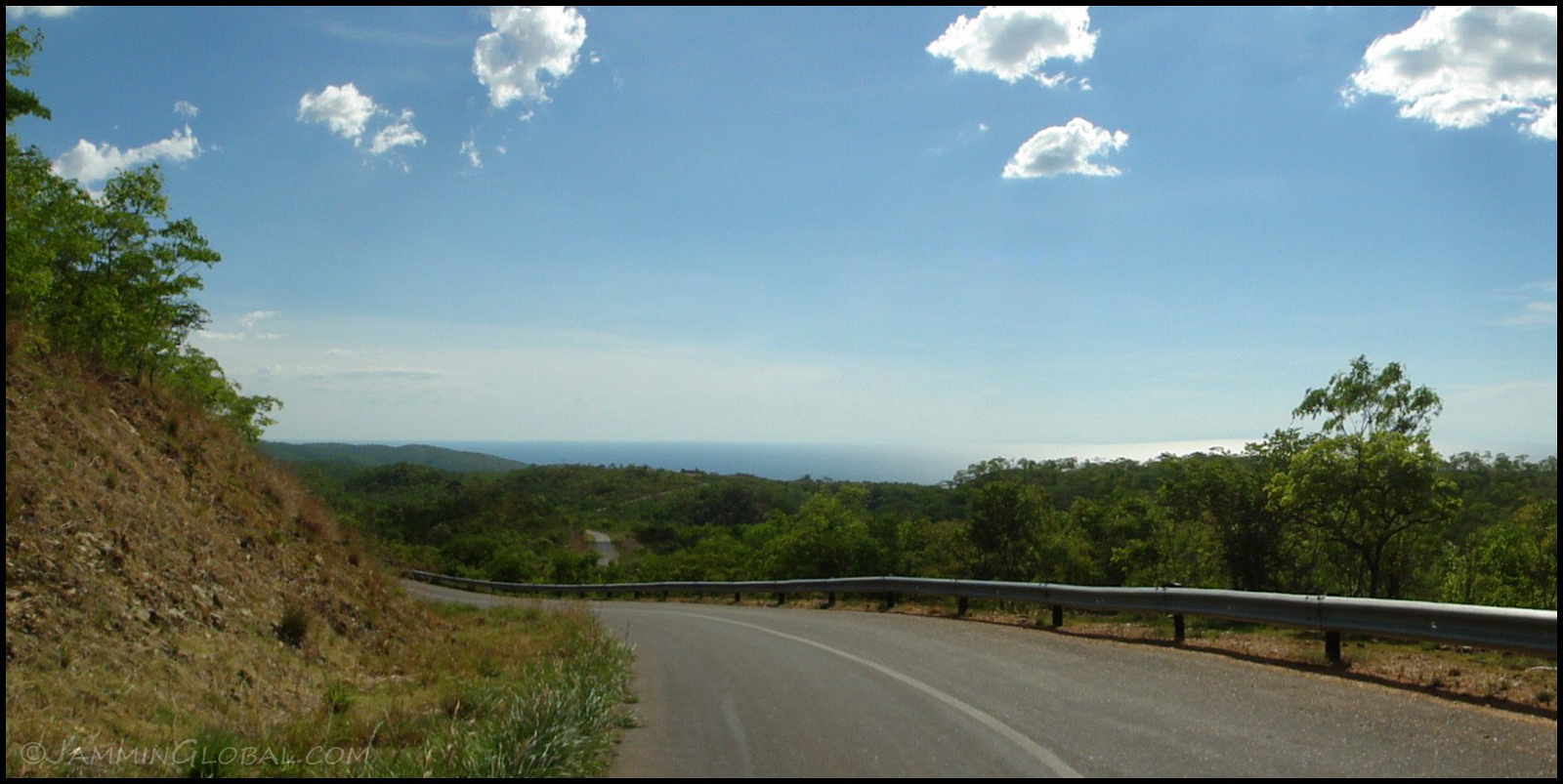 ...I rounded a corner and wow, grand old Lake Malawi was spread out across the horizon.

I passed through the lakeshore town of Metangula and headed for the Chuwanga Beach Hotel...

The view from my beach hut of beautiful Lake Malawi.

The mountainous shoreline of Lake Malawi that I had to descend down to get here. 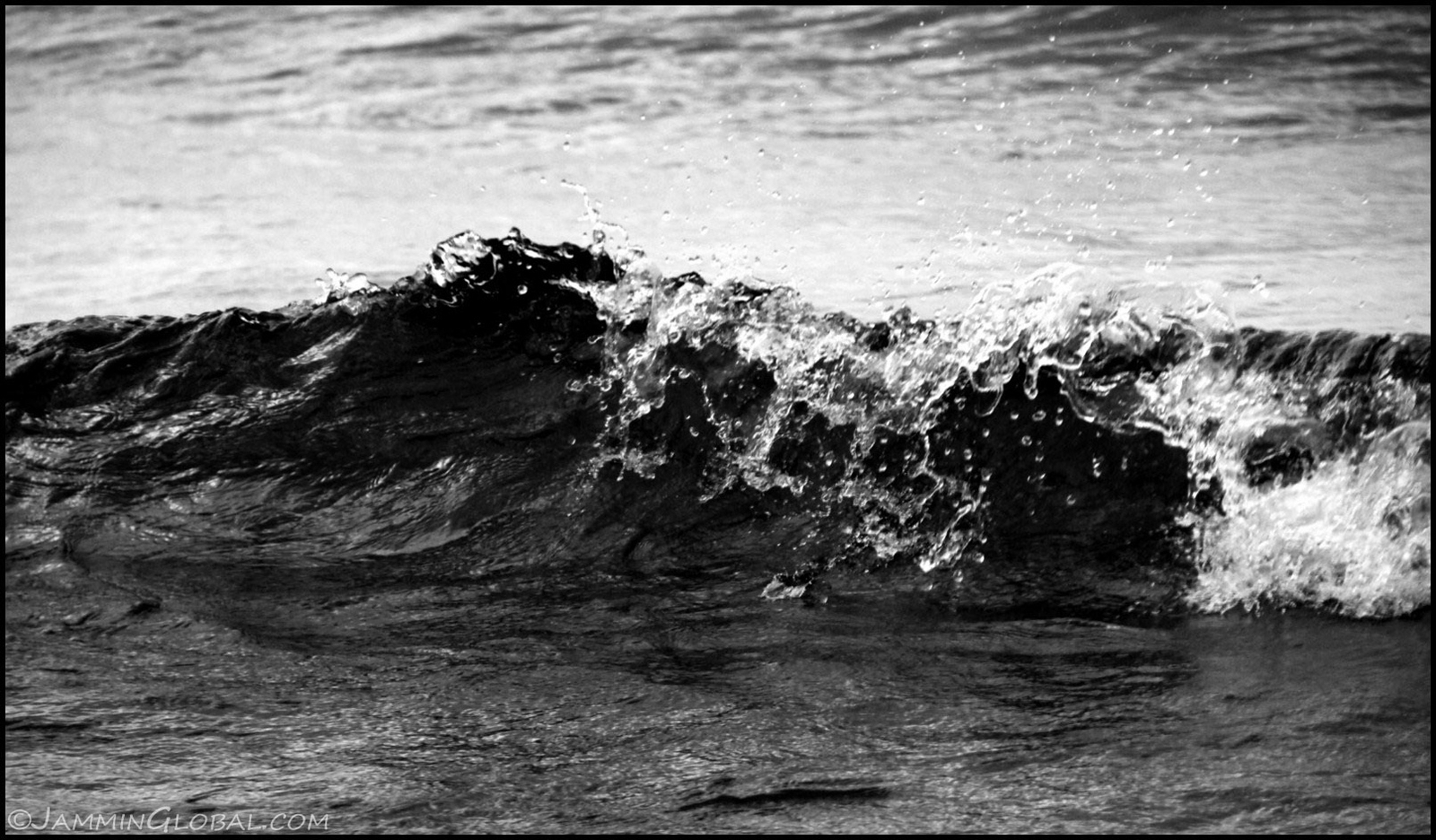 The waves of Lake Malawi. This lake holds a special place in my life as my family used to vacation on the opposite shore in Malawi when we lived in Zambia during my childhood. I wasn't going to pass through Malawi, due to visa complications, but coming back to these waters was enough to stir up the nostalgia.

On the Mozambican side, the lakeshore isn't developed and the lake is used as the primary source of water for the local population. They bathe, wash their clothes and take water back home for cooking and drinking.

Mango season was in full bloom and I asked the hotel workers to get me a few from the mango tree in the parking lot. I enjoyed these luscious fruits over the day and had my fill of fresh mangoes.

An old dhow carved out from a single tree trunk on the shores of Lake Malawi.

A fisherman heading out for his evening catch. Lake Malawi is the second-deepest lake in Africa, after Lake Tanganyika, and is the southernmost of the Rift Valley Lakes. Its isolation and great depth has allowed hundreds of species of endemic fish to evolve over its lifetime. The lake is also known for its snail population that harbor the deadly bilharzia parasite. Bilharzia wasn't an issue when I was a kid but recently, with certain snail-eating fish being over-fished, bilharzia has become more of an issue.

As dusk falls, a young lady with her baby tied on her back walks past a fisherman mending his net.

Enjoying the strong breeze coming off of Lake Malawi in my simple beach hut.

Heading out of Chuwanga Beach and soaking in the grand views of Lake Malawi. Click here to see the high resolution version.
_

Next: Mozambique, Part 2: Heading across Niassa Province to Pemba