Kenya, Part 4: Into Nairobi and End of Part 1 of my RTW Journey

Successfully riding the Lake Turkana route was a major accomplishment for me and it was an exciting end to the first half of my round-the-world journey. I was planning on taking a break in Nairobi for a few months and the drive from Maralal to the capital felt like a short hop compared to the rest of the journey.

The offroad that started in southern Ethiopia continued past Maralal and touched tarmac in Rumurutri. The convoy was now reduced to just Peter and Jill's Defender and sanDRina and after spending the night in Nyahururu, we crossed the Equator and entered the Southern Hemisphere. Hitting the highway at Nakuru was a bit of a development shock after being in wilderness for the past week and we celebrated our completion of the Turkana Route in proper Kenyan style - having Nyama Choma (barbequed meat).

After taking refuge in the overland traveler asylum of Junction Jungle in Nairobi, we all got properly stamped in at immigration and that signaled a break in my travels for the next few months.

We stayed at the Yare Camel Club and Camp in Maralal and captured these athletes in preparation for the International Camel Derby that was being hosted in a week's time. These dromedary camels originated in East Africa and have been used as pack animals through the drylands in the region, but during the derby, it's all about speed and strength. The competition is serious but amateurs can also enter and race these beasts through the streets of Maralal. 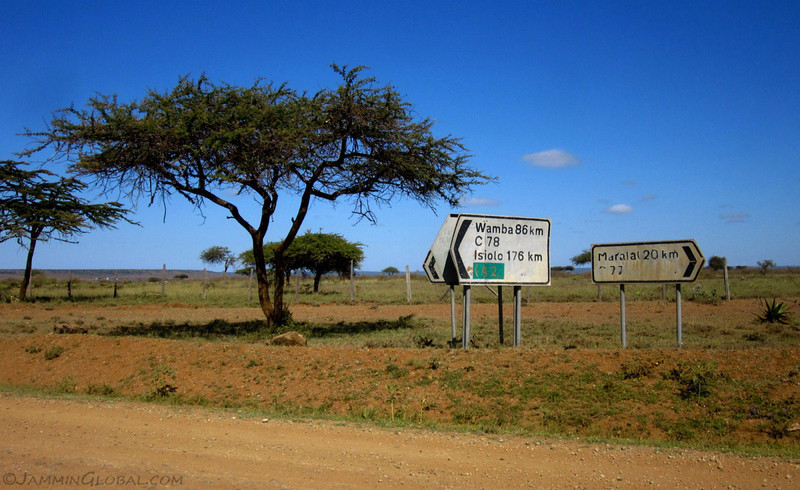 Carlos split off and wanted to ride a bit more offroad in the west and would meet up with us in Nairobi. It was great to ride with him.

sanDRina was back to her usual configuration with both side panniers back on. I thanked my overland companions for taking turns and carrying my heavy panniers. Riding without them definitely made the Turkana Route more enjoyable. 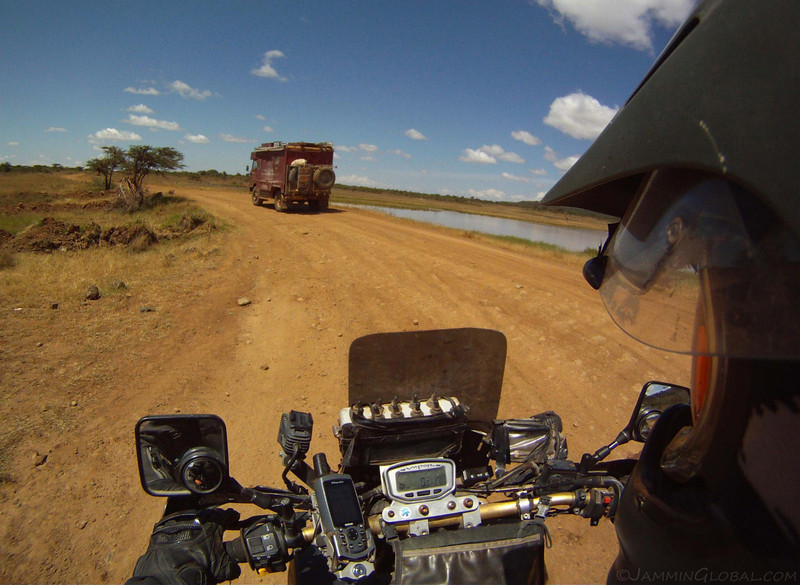 Peter and Jill spotted something exciting as we rode past the Mugie Wildlife Conservancy...

...a giraffe and some zebra. I had seen giraffes when I was a kid in Zambia, but seeing them again in the wild was a wonderful experience.

This giraffe was trying to bend down to drink some water but was very nervous and kept looking around and hesitating. 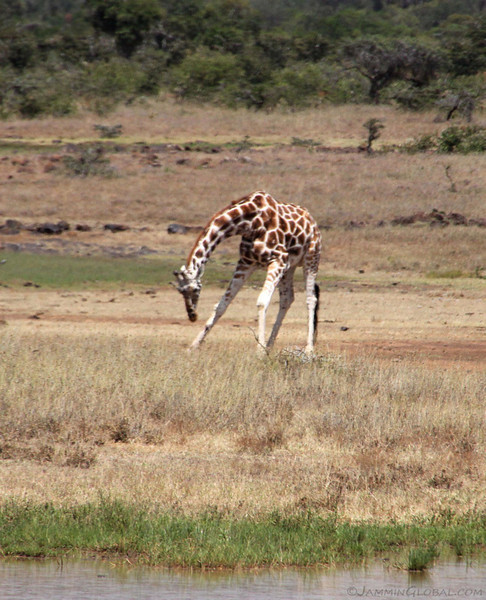 When he felt comfortable enough, this tall animal slowly bent its front legs in a coordinated movement to get its tall neck closer to the ground and...

...finally managed to bring its tongue in contact with water on the ground. It looked very graceful and probably required a lot of strength to keep that pose just to get a drink. 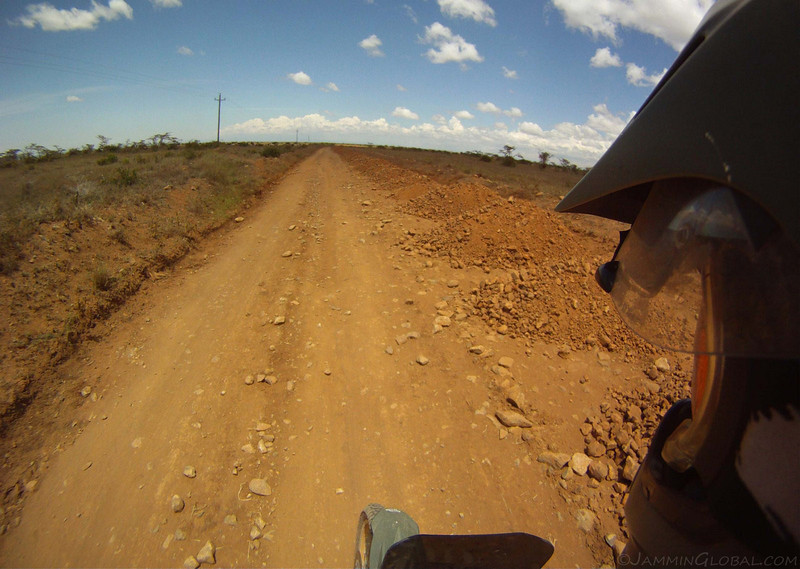 Back on the road and enjoying the last offroading for a while to come.

The scenery changed the further south we went and it became greener and greener, until...

...we hit the tarmac at Rumurutri. That was about 900 kms (560 mi) of offroad from southern Ethiopia to here; the longest stretch that I've done. We aired up our tires and...

...enjoyed the sensation of smooth roads. That looks like rain clouds, but it stayed away.

I spent the night in Nyahururu at the Olive Shade Lodge and for Ksh600 ($6.45) got secured parking for sanDRina and a hot shower.

The next morning, we crossed the Equator on the way to Nakuru.

My GPS told me we were crossing into the southern hemisphere, once more, after being in the north since my Atlantic crossing with Grimaldi.

Peter and Jill wanted to see the Coriolis Effect demonstration and I was up for it since I hadn't seen it when I crossed the equator in Ecuador.

When the water is drained from this green tub south of the equator, the floating wood strip shows that the water spins in a counter-clockwise direction. Then we walked about 10 m (33 ft) north of the equator and saw that the wood strip rotated in a clockwise direction and then right on the equator, there is no rotation and the water just drains straight down. It was pretty cool to see the Coriolis Effect in person and to realize that yes, you are standing on the exact position of the equator of this massive planet. The effect comes about due to the rotation of the Earth and can be seen on the large scale in weather systems; hurricanes spin clockwise in the northern hemisphere and counter-clockwise in the south. What I didn't know was that the exact position of the equator moves throughout the day by about 15 m (49 ft), which I think is due to the wobble in the Earth's axis.

Riding in the southern hemisphere and enjoying big trees once again.

At Nakuru, we hit the major highway through Kenya, which takes cargo from the port in Mombasa through Nairobi to Kampala in Uganda and onwards to Rwanda and Burundi. But that was for later. Right now, I was turning left and heading for the capital.

It was a shock to be on a highway after all these kilometers in wilderness and not to mention riding on the opposite side of the road for the first time on this trip. From Kenya into Southern Africa, they drive on the left side of the road, a vestige of British influence. But being a bike makes it easy to switch sides except that now right turns are longer than left turns. 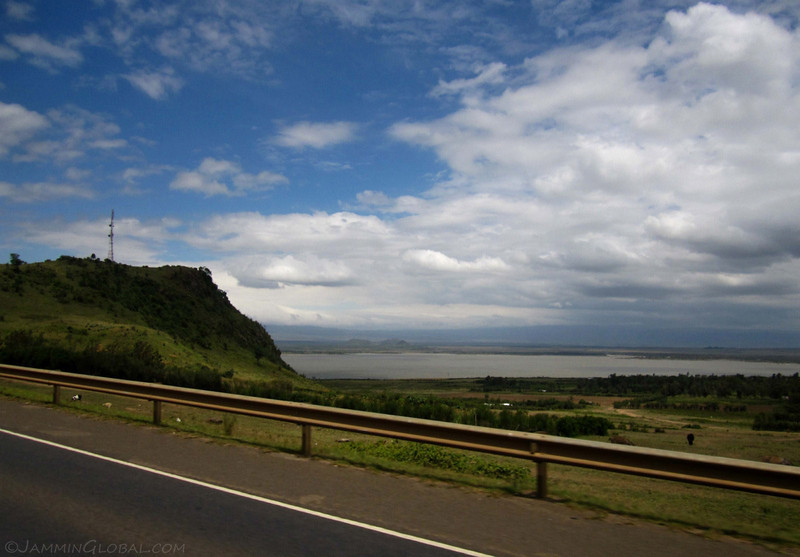 Riding the escarpment of the Eastern Rift in Kenya and passing Lake Elmenteita, a shallow soda lake. It is one of many Rift Valley lakes in Kenya.

We stopped for lunch at a roadside stop that was chock full of barbeque houses, with waiters from every restaurant accosting arriving customers to eat at their place. We settled for the Pink Rose Butchery, as it was at the end of the line and offered a bit more peace than the others.

The butcher at Pink Rose holding up a leg of mutton, the most typical meat for Nyama Choma (grilled meat).

A huge rack of goat ribs and African Sausage on the smokey grill. 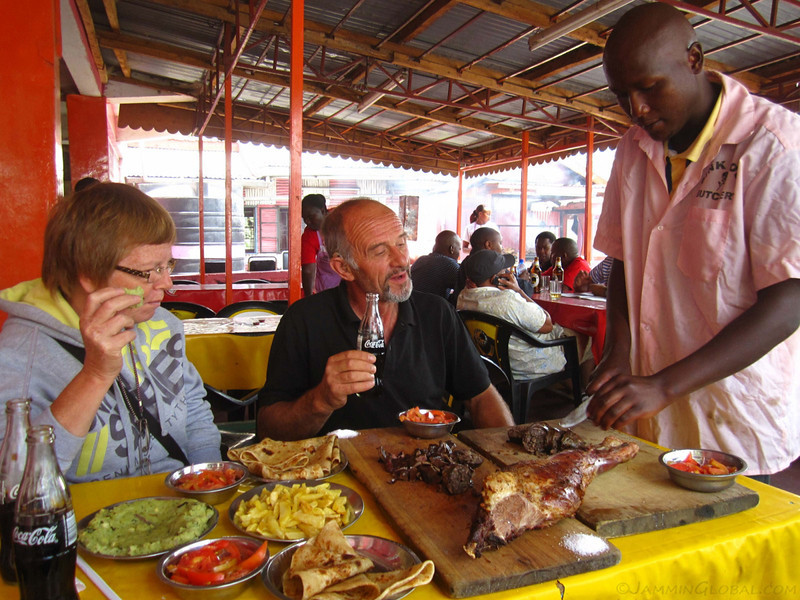 Celebrating the end of our journey down Lake Turkana with a feast of grilled mutton, liver and sausage. Oh yeah, there was other food too: the green stuff is mukimo - mashed potatoes with kale and onions; french fries are known as chips in Kenya, just like in the UK; and I was super happy to find out that chapati is a staple food in Kenya, a vestige of the long-standing Indian influence in Kenya (who were brought over by the British to work on the railway).

The last leg into Nairobi rides high up on this escarpment offering grand views across the vast Rift Valley.

My GPS directed me through Nairobi's streets straight to the overland meeting point of Jungle Jungle in Nairobi's Lavington suburb. My arrival into Nairobi signaled the end of the first part of my motorcycle trip that started in Chicago in March, 2010.

Chris, walking up to the motorcycle on the right, runs Jungle Junction and opened up this house in a large ground to overland travelers. He provides an excellent work shop where travelers can get their tired bikes and cars fixed. There's also WiFi and hot laundry - luxuries for travelers on the road. He's very helpful to travelers and has been a base for the overland traveling community in East Africa for many years. 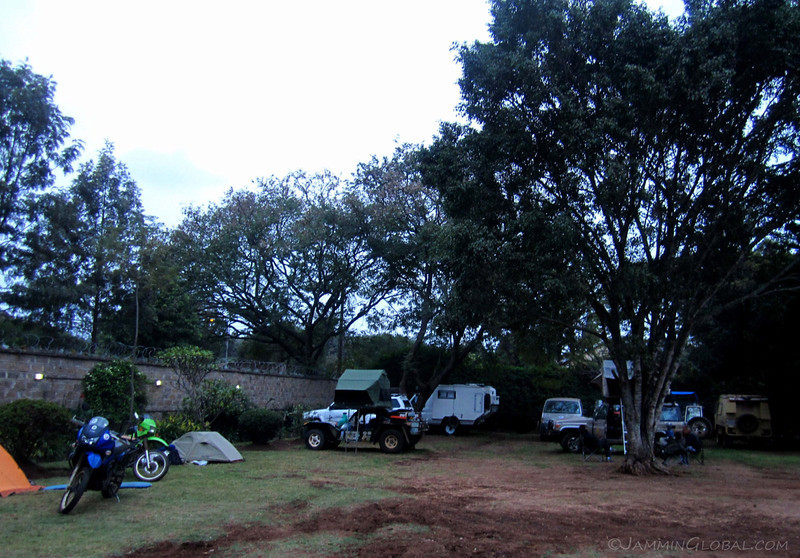 His large front yard is open to camping and it was good to meet other travelers and feel at home.

Jungle Junction acts like an asylum for overland travelers, a place where you're not called crazy for wanting to give it all up to pursue wanderlust. This is Chris and Elayn's home-made buggy that they've been traveling with from Australia. Chris is a suspension engineer and it was good to talk about automotive dynamics.

Philip, from Germany, was another asylum seeker at Jungle Junction. He had traveled through West Africa before on a big 600cc motorcycle and was fed up with the weight of the heavy bike and so for his next trip, he decided to just fly in and buy locally-available small-engined bikes, like this Honda 150cc scooter. On this trip, he was going from Mombasa to Kinshasa, all the way across the DR Congo. He was so inspired by all the tubes that I had on sanDRina for storing parts and tools that he went out and bought some PVC tubing and made a few for himself. 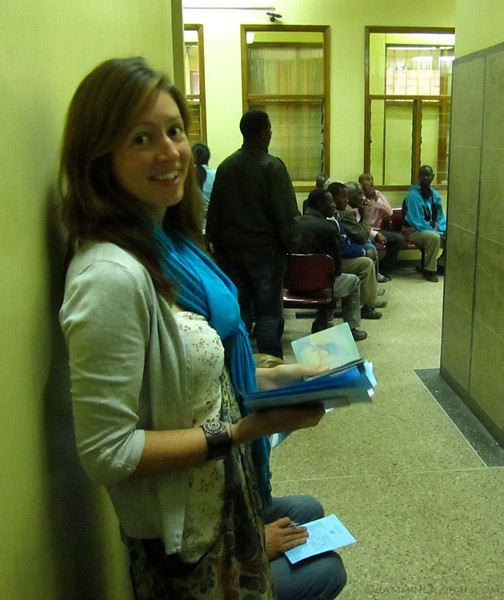 Lu at Nyayo House, taking care of paperwork in Nairobi. I went with most of the travelers in my convoy to the immigration office where we got officially stamped into Kenya, which was a strange feeling after being in the country already for more than a week. 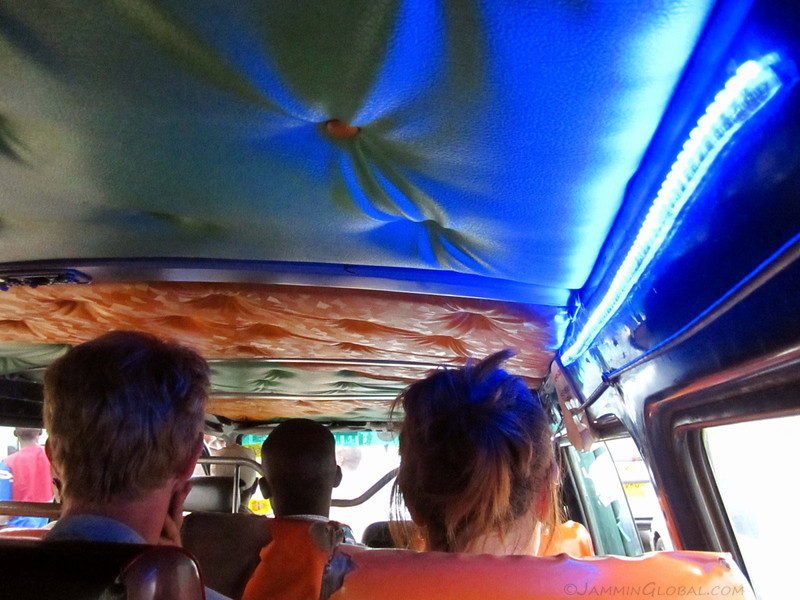 Riding with Guy and Lu in a matatu, Kenya's most preferred mode of public transport. They are usually decorated pretty wildly, although the government has tried to tame and regulate them. 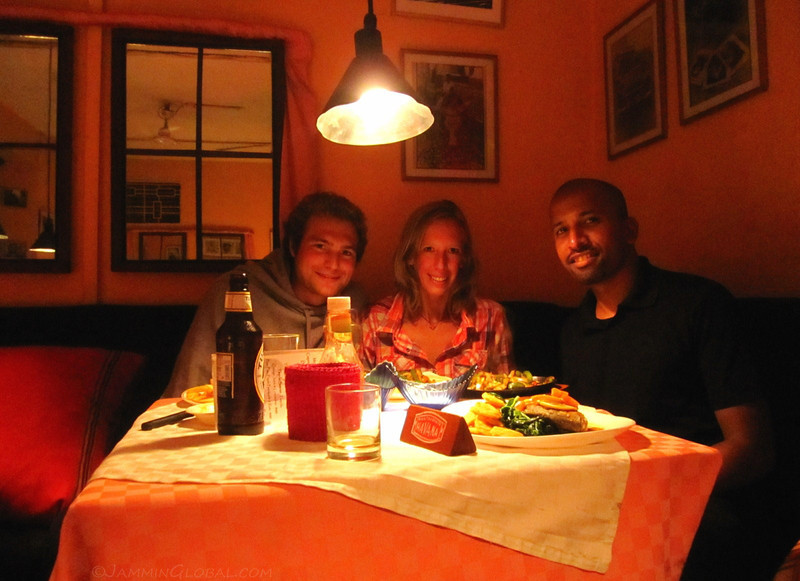 Having dinner with Ferdi and Katie, whom I met a Tim and Kim's first and then traveled the Turkana Route with. They were continuing on further south and I told them to report back to me on routes and places to see when I get back on the road next.
_

And with that comes a conclusion to the first part of my journey that started in Chicago in March, 2010, criss-crossed Latin America, crossed the Atlantic and came down eastern Africa to Nairobi. I was going to be taking a break in Nairobi to do research for the distance masters that I'm studying for. It was going to be a change of pace from traveling to not moving for the next few months, but I'm highly adaptable and take change as it comes.

Next: Kenya, Part 5: Life in Nairobi and 'Food without Borders'

Previous: Kenya, Part 3: Camping in the Bush and Ride up to Maralal