I made my pilgrimage through the mud of Ethiopia and arrived in the small town of Lalibela, perched on top of a plateau and housing several rock-hewn churches. Built in the 12th century CE, these churches are a marvel, being carved out of solid rock. The story goes that King Gebre Mesqel Lalibela either had a heavenly vision to build the churches or was inspired after spending time in Jerusalem and wanted to recreate that holiest of cities for Christians.

I spent two days there and met up again with Mitch to explore the churches and soak in this architectural marvel of Ethiopia.

I stayed at Helen Hotel for 100 Birr ($5.90) a night and woke up to the sound of construction as a new wing was being built.

The sun was out and I had to dry all my gear from riding in the rain all through the previous day. 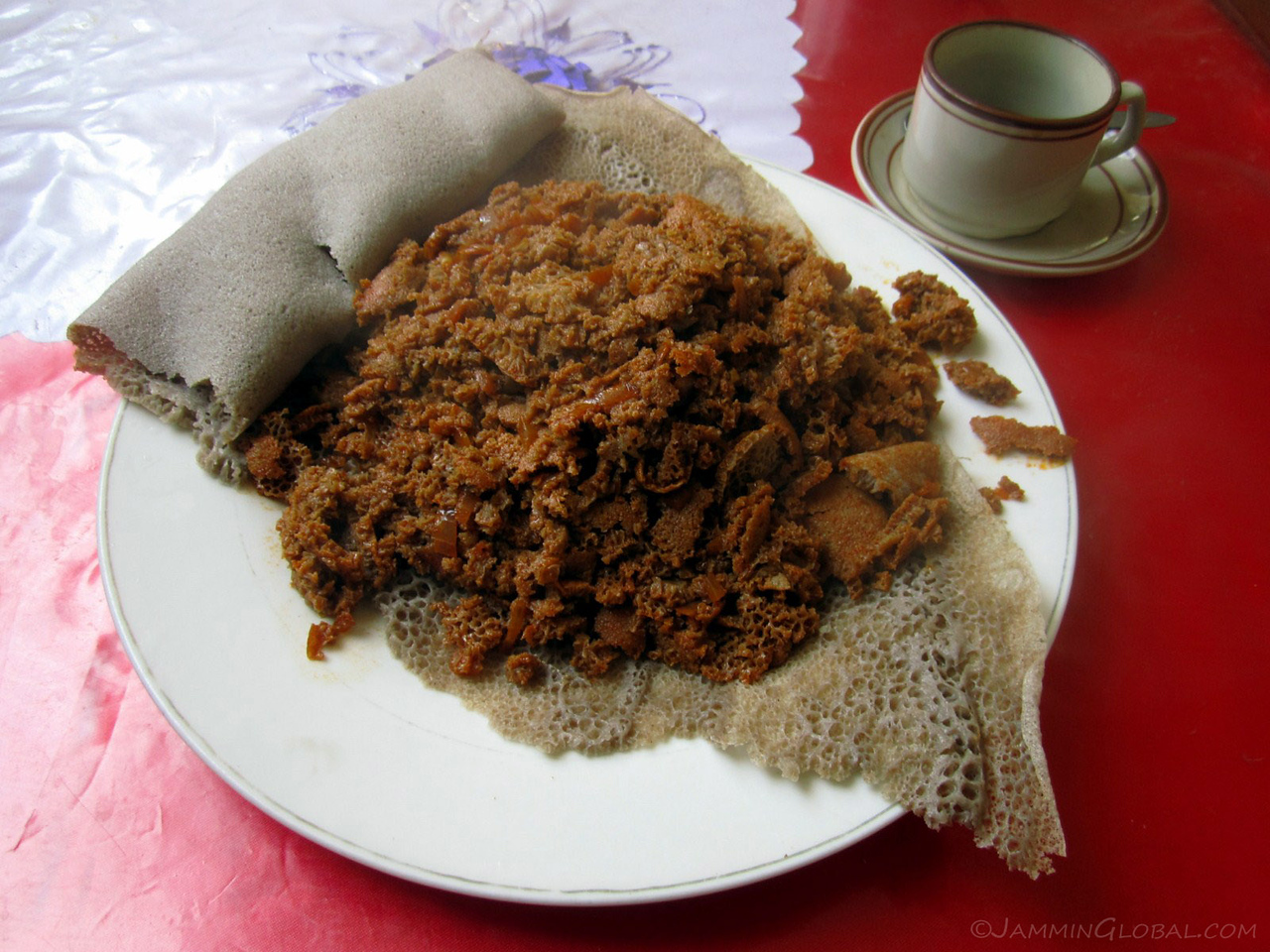 Having breakfast of fir-fir, which is chopped up injera with berbere spice, served on injera.

I met up again with Mitch, who was traveling around the Historical Circuit of northern Ethiopia at the same time as me and this was the third city that we regrouped in, after meeting in Gondar and Axum. As we walked up the steep slopes of Lalibela to where the churches were, we came across this group of donkeys, taking back food aid from USAID.

It was interesting to realize the journey that this bag of surplus, subsidized, American wheat has traveled to finally end up on a donkey in Lalibela, being taken to the home of these Ethiopians.

A game of table tennis on the streets of Lalibela. 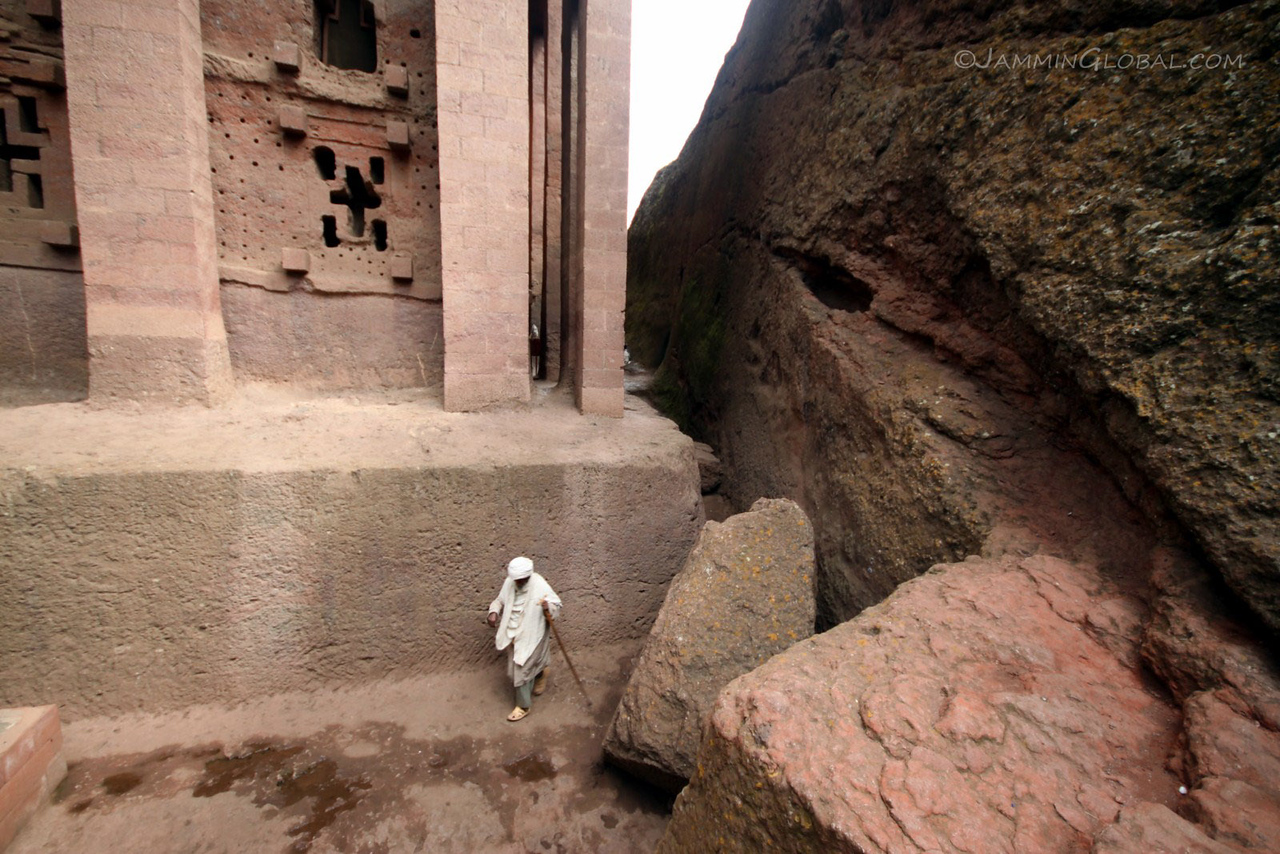 ...the largest monolithic church in the world. These churches have been cut straight into this red volcanic rock. 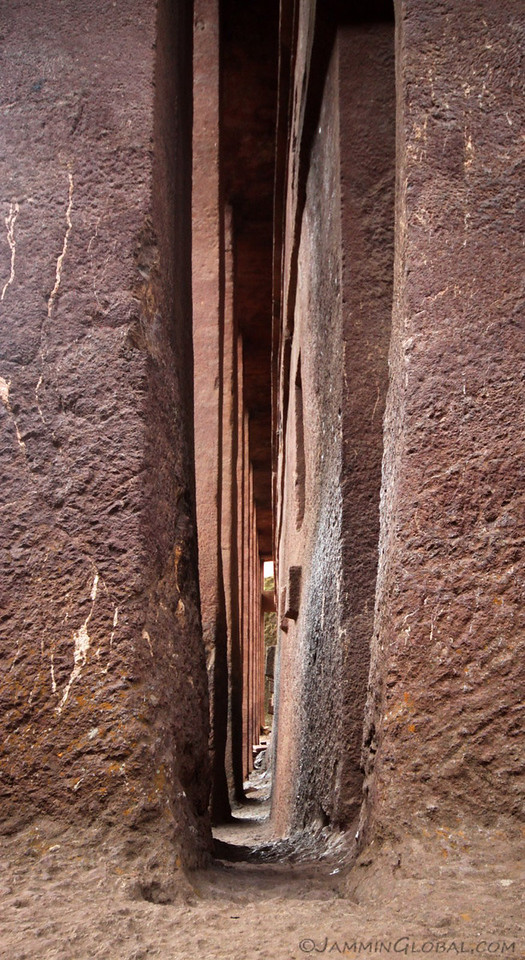 Pillars of stone of Bet Medhane Alem, towering 11.5 m (38 ft) and surrounding this church of rock. 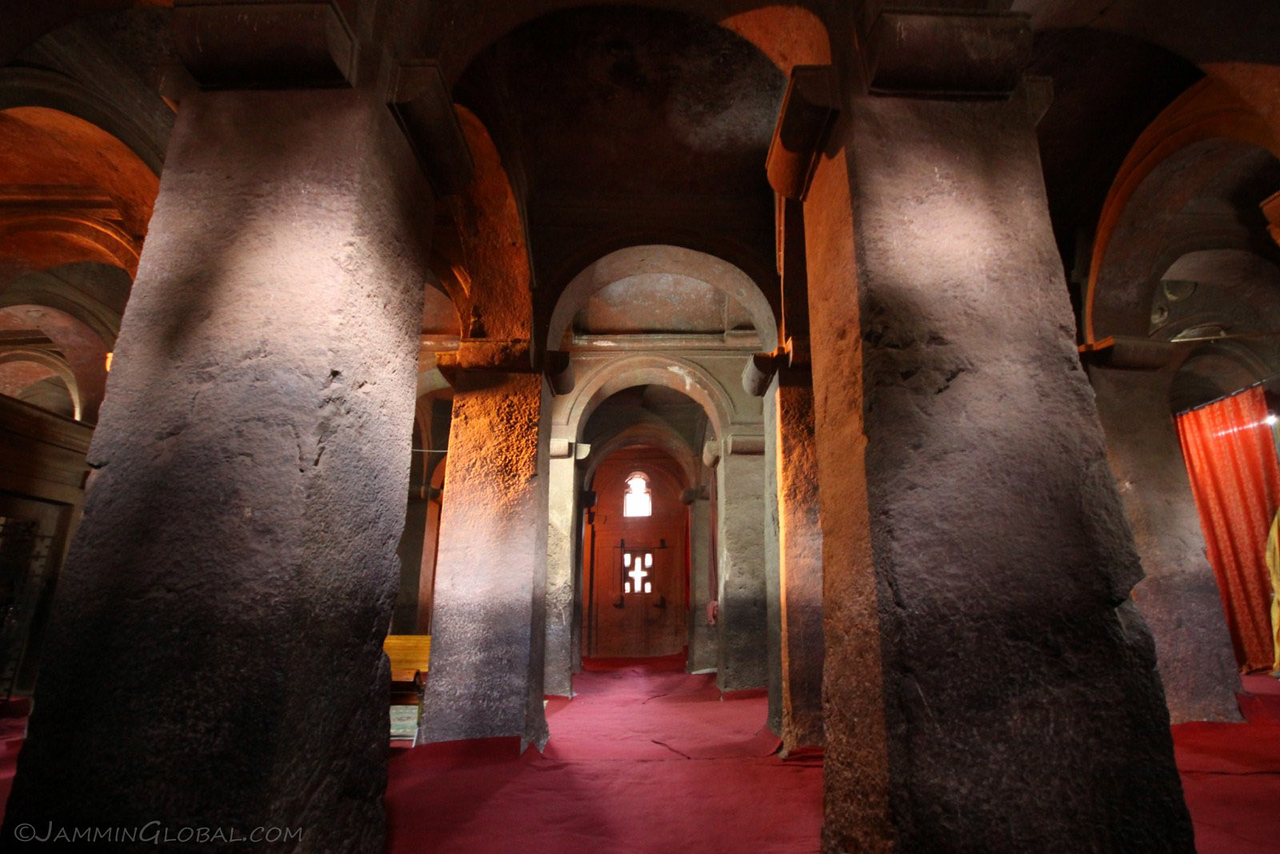 The serene interior of Bet Medhane Alem, all carved from one solid piece of rock. It is understood that the builders would have started at the roof and worked their way down to the floor, so that rocks wouldn't be falling on their heads. 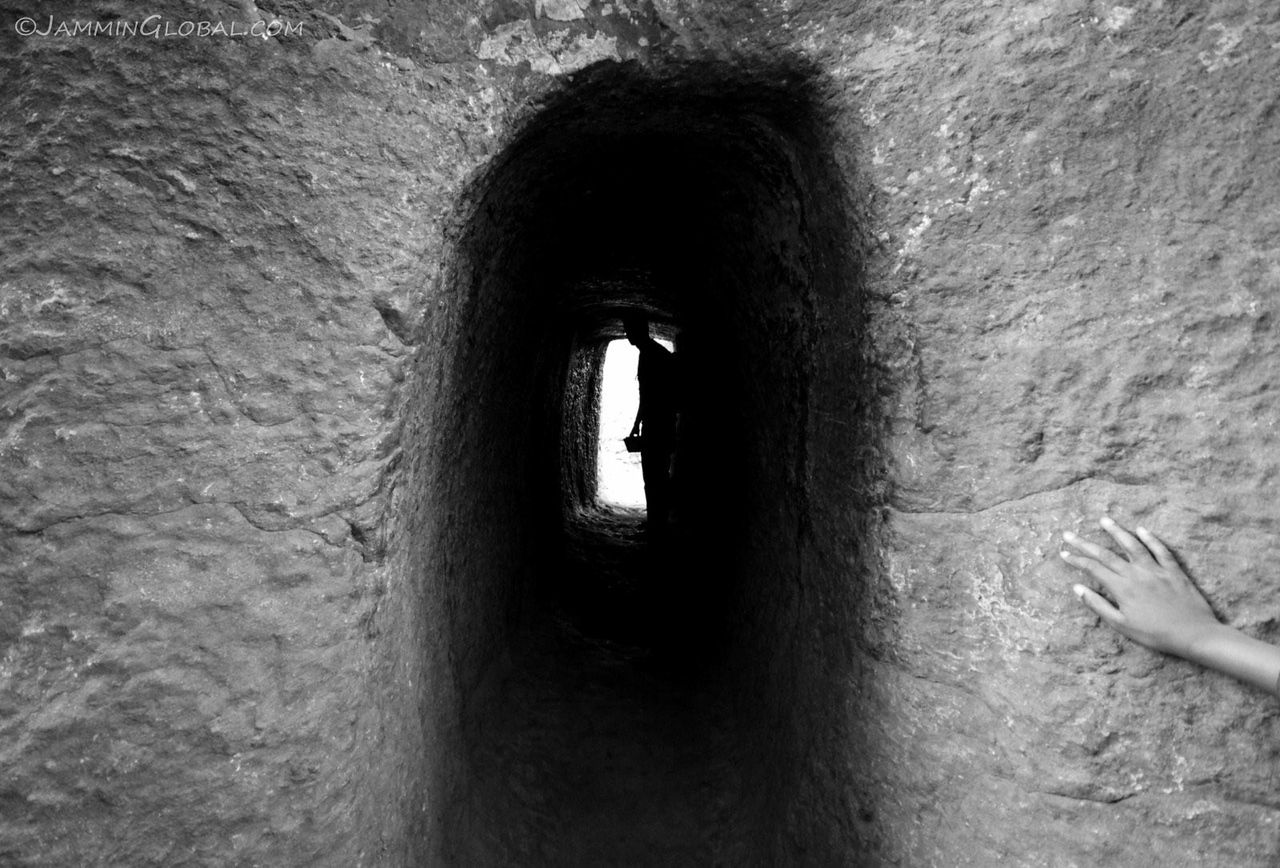 The tunnel connecting Bet Medhane Alem to the next church in this group... 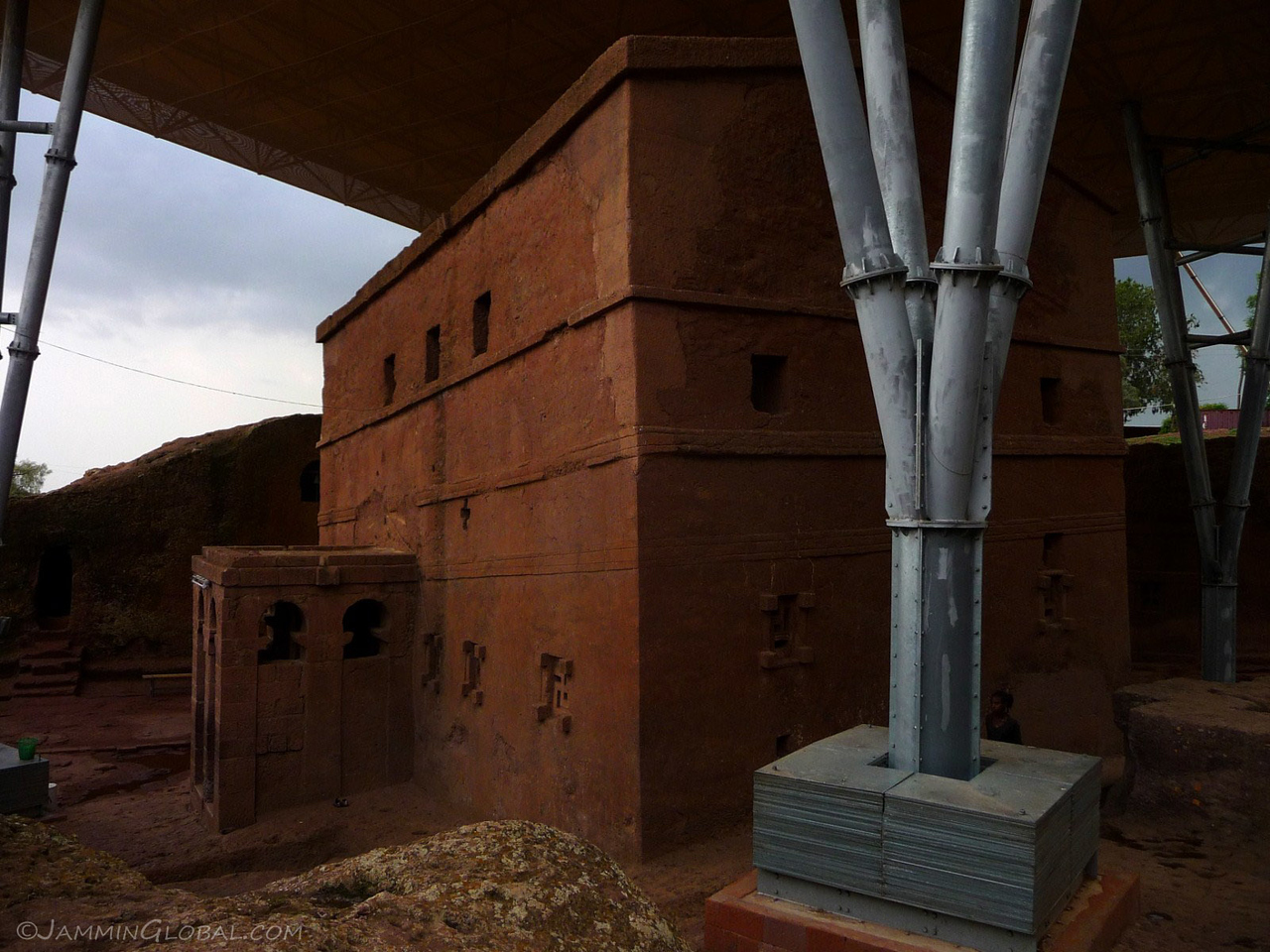 ...Bet Maryam, considered to be the first rock-hewn church to be built at Lalibela. The steel scaffolding and roof are recent additions by UNESCO to protect some of the churches from water damage. This church highlights what makes the rock-hewn structures of Lalibela so remarkable, in that they are not simply carved into rock, but almost completely freed from it. 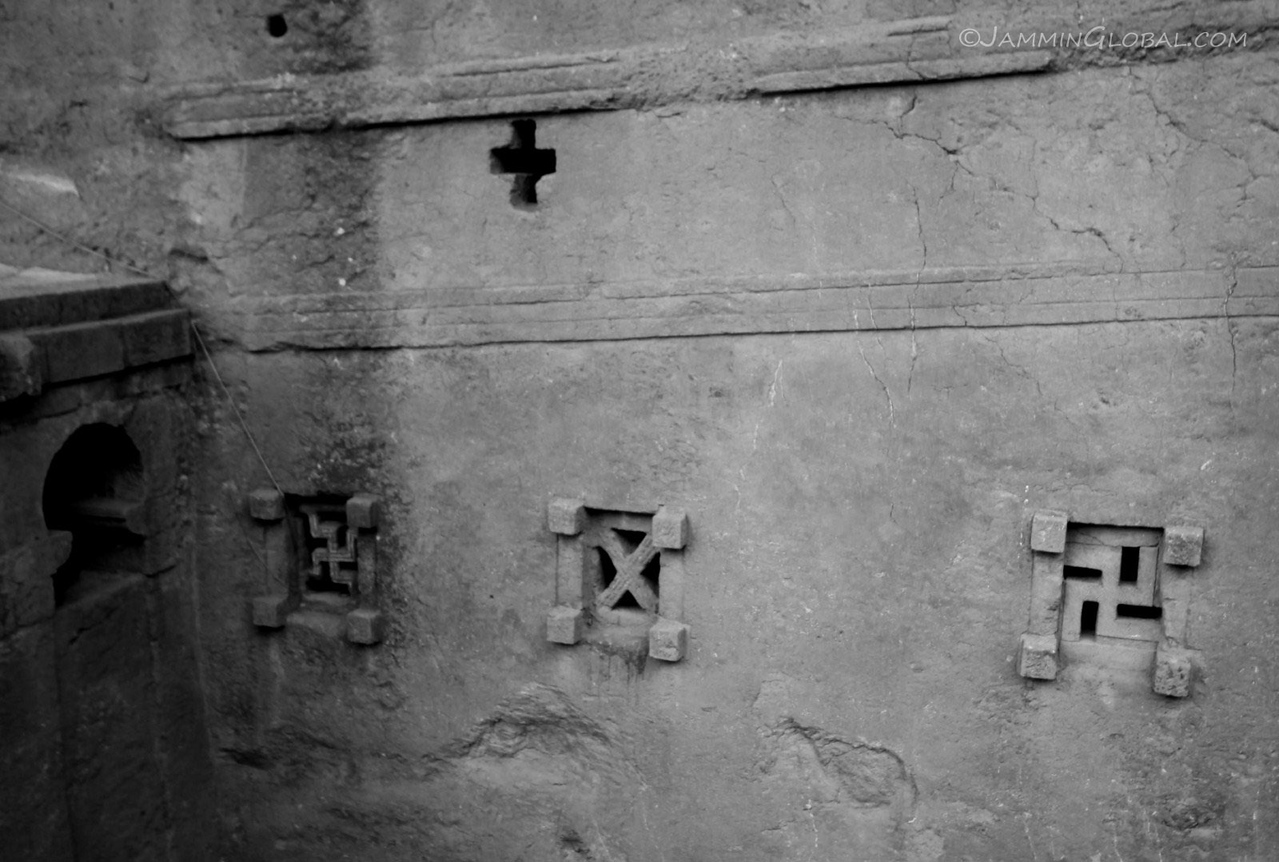 Three windows on the eastern wall of Bet Maryam, said to represent the crucifixion of Jesus and the two sinners. Interesting to see that left-facing swastikas have been used to represent the sinners. The swastika, a symmetric cross with bent ends, is an old symbol that has been used by many civilizations and is a prominent symbol in Hinduism. The image of the swastika has been tarnished in the West after Hitler decided to use a right-facing, half-rotated version to represent Nazism.

The deep facade of Bet Gabriel-Rufael ('Bet' meaning 'house of'). Besides the marvel of being rock-hewn, the churches at Lalibela are impressive due to their association with water. Note the small well at the bottom of the trench. The area is very hilly and far away from a river source, but there are water tanks next to each church that fill up naturally from artesian aquifers and rain water. This hydrological system is said to have been designed by a certain Abba Libanos.

Walking through tunnels in the rock around Bet Gabriel-Rufael and marveling at the work done by Ethiopian artisans in the 12th century. The legend says that all the churches were built during the decades-long reign of King Lalibela. Modern construction engineers doubt the time frame and say it must have taken over a century, at least, but believers invoke divine intervention and say that angels came down to help with the rapid construction. 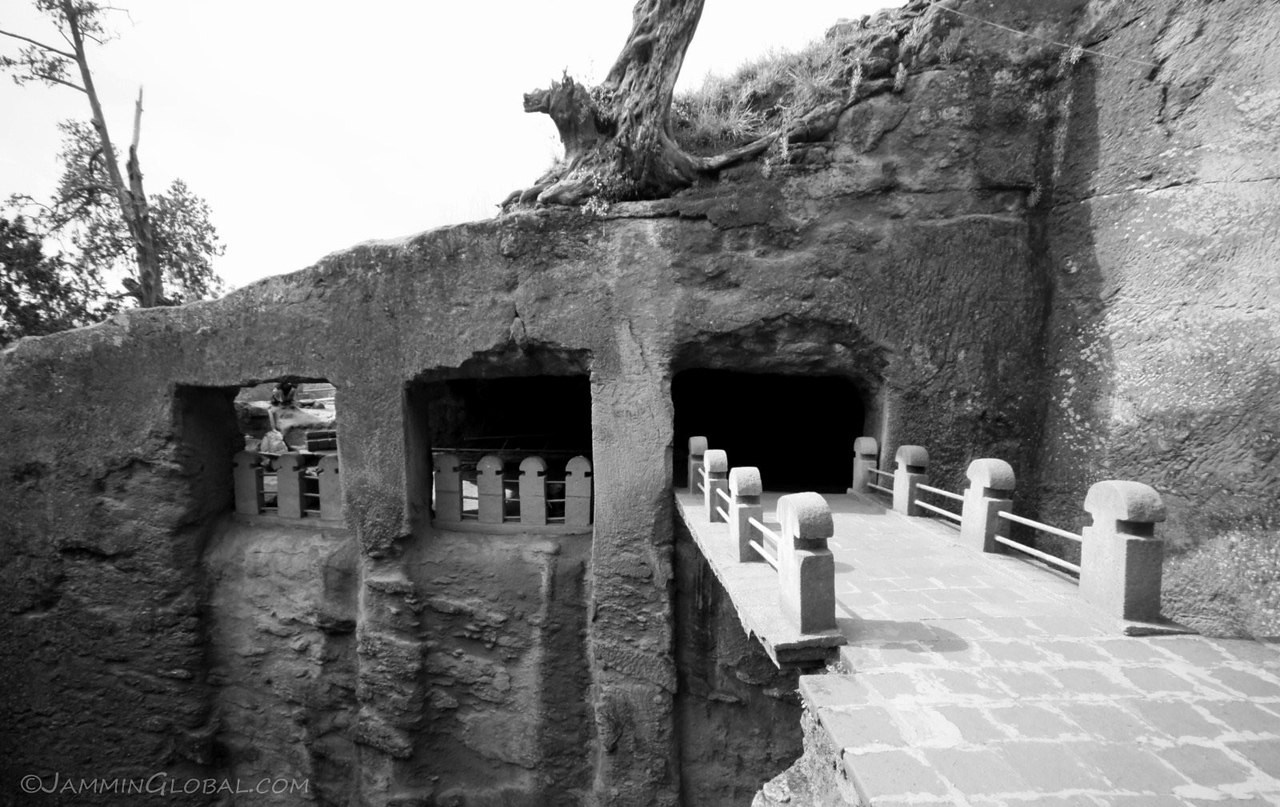 The walkway across the moat at Bet Gabriel-Rufael. The straight sheer face cut in the rock is very impressive. 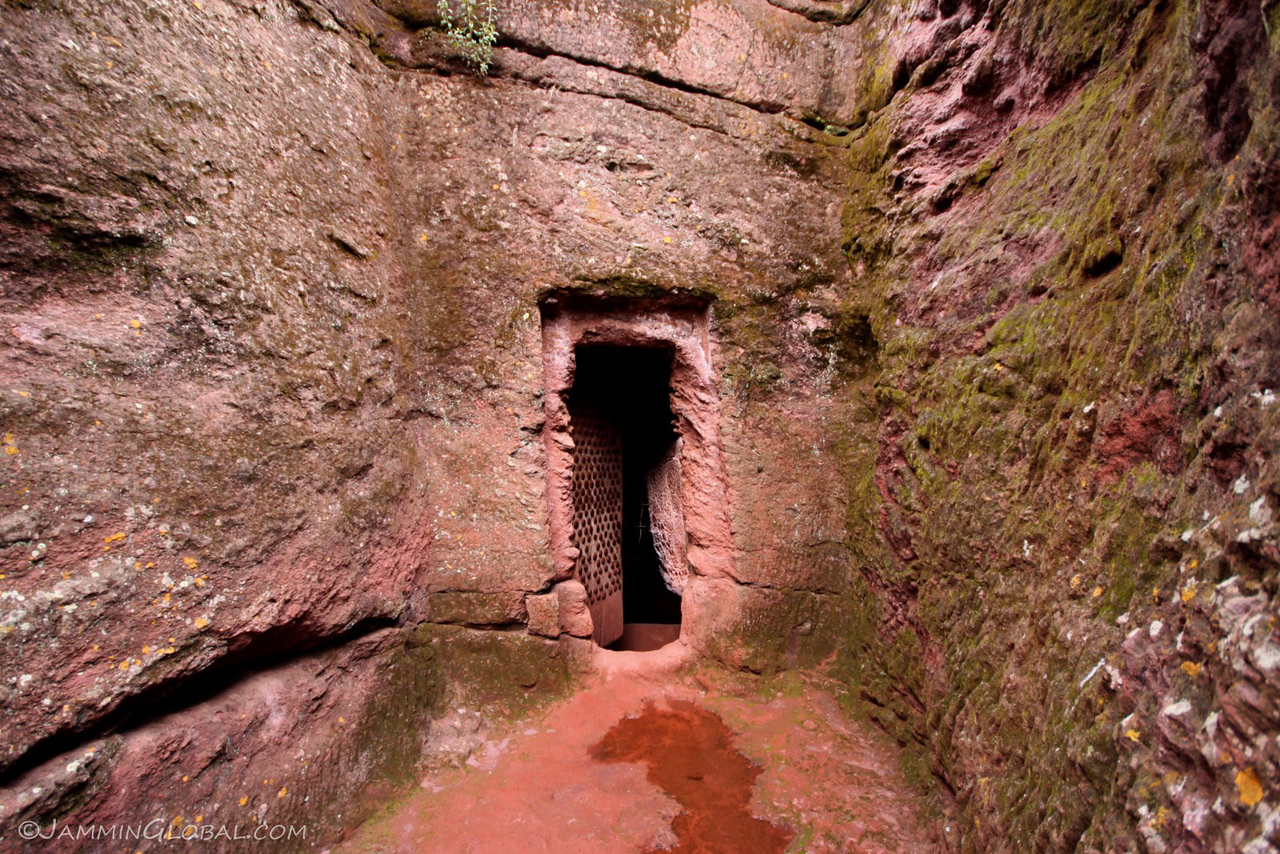 Another hole in the wall in the rock at Lalibela, leading to another church.

Separate from the other group of churches is the masterpiece of Lalibela, Bete Giyorgis (the Church of St. George). It is a 15 m (50 ft) deep structure in the shape of a Greek cross.

Enjoying the view of Bete Giyorgis and marveling at how it was constructed, about 700 years ago on this hillside in Ethiopia. 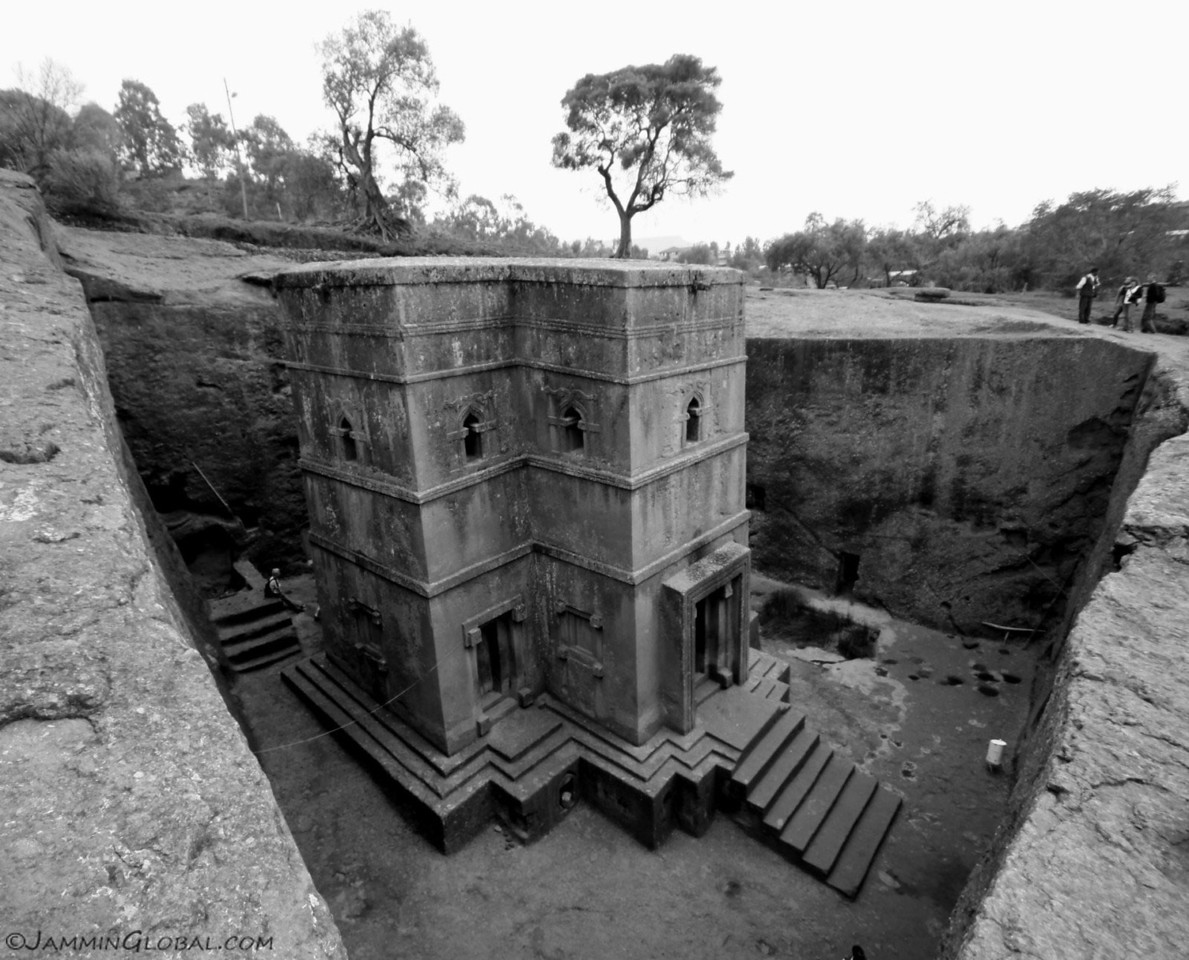 The Church of St. George, liberated from solid rock. 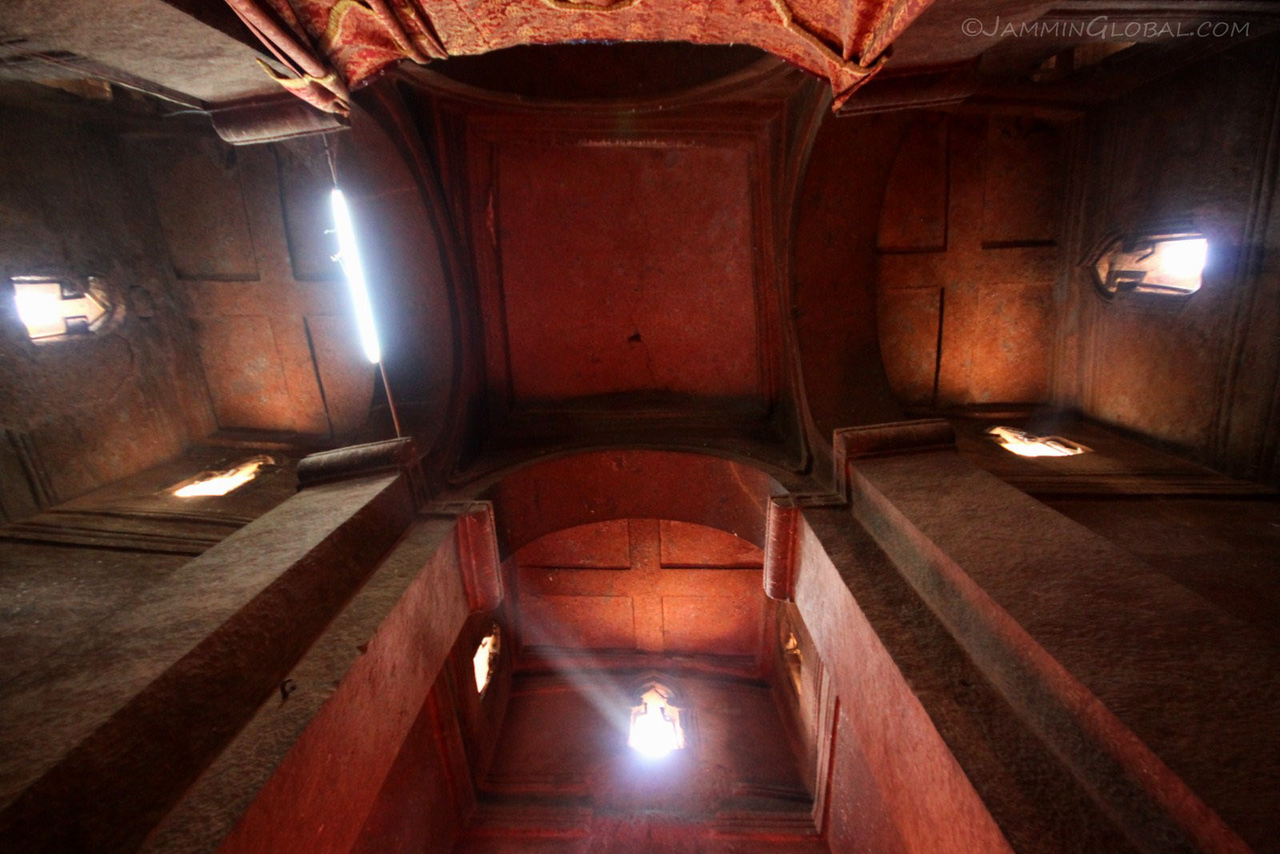 The interior of Bete Giyorgis, with its simple structure of a symmetric cross.

A priest inside Bete Giyorgis, which has been continually staffed since its opening. Lalibela is still an important religious site for Ethiopian Orthodox Christians.

Levitating (sort of) in the corner of the cross of Bete Giyorgis. 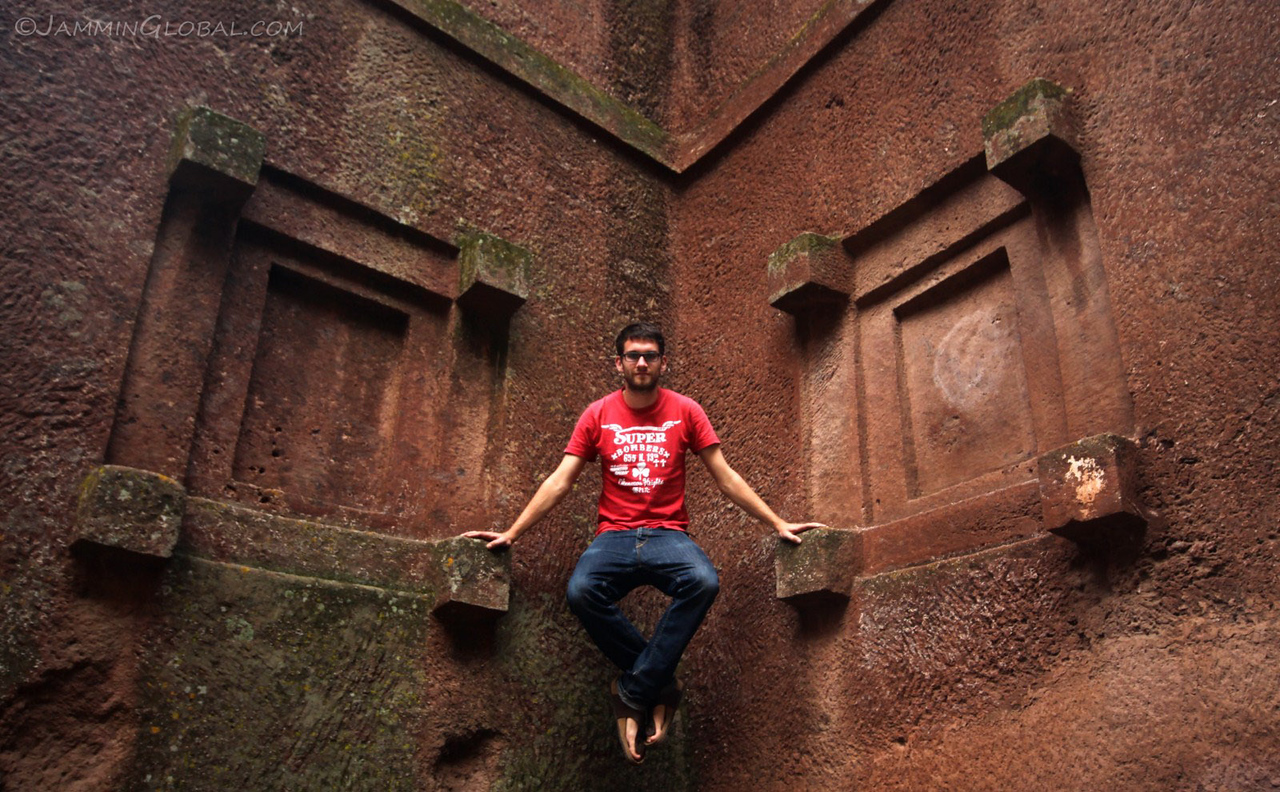 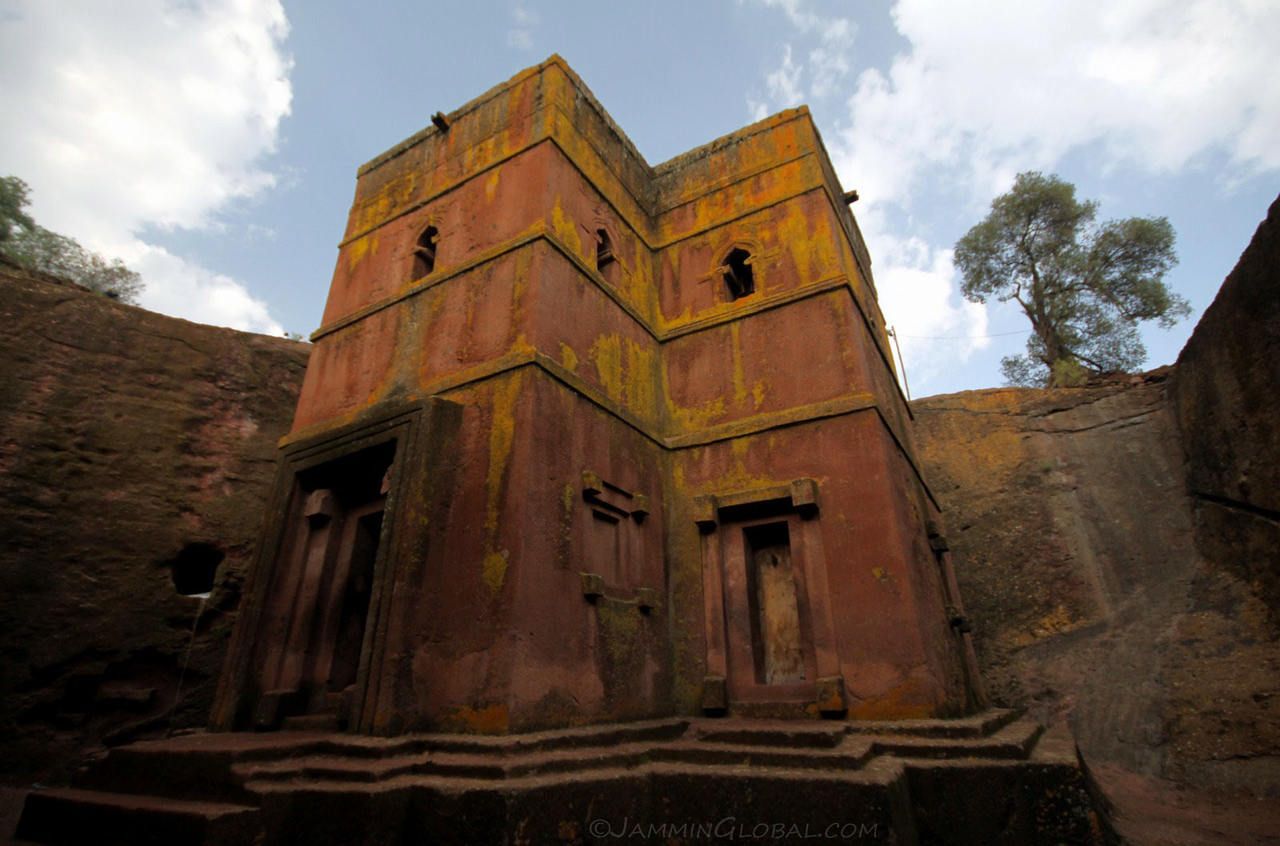 The impressive church of Bete Giyorgis in its rock trench. The legend goes that just as King Lalibela was finishing up all the other churches, he was paid a visit by Ethiopia's patron saint, George, who was quite upset that not a single church was dedicated to him. King Lalibela was very apologetic and promised to build St. George the most beautiful of churches in his honor, resulting in this masterpiece of architecture. 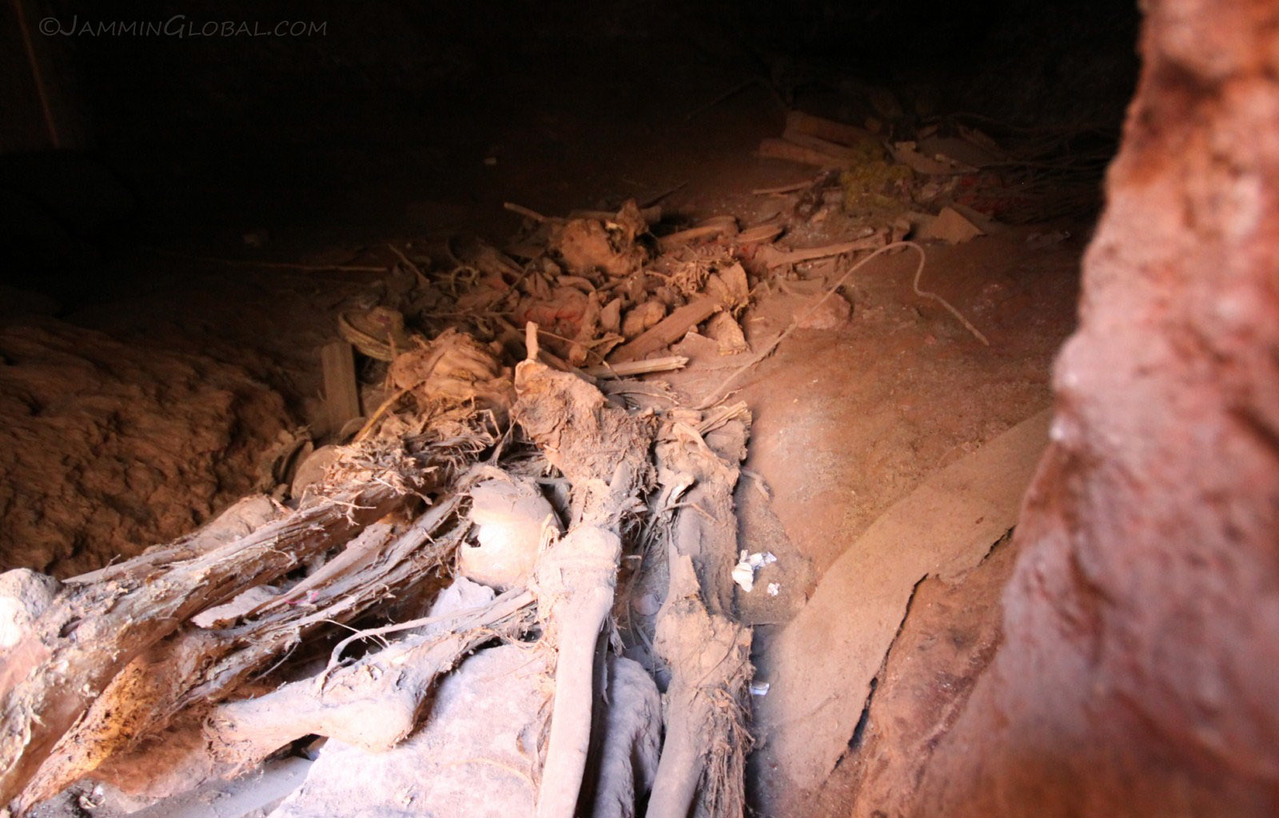 The remains of a mummified corpse in one of the many holes in Bete Giyorgis' pit.

At St. George's church, Mitch and I met Nicola and invited her to join us for dinner at the Seven Olives restaurant. Good chats. Nicola is a medical student from Halifax, Canada and was on her last long vacation for the next few years as she was about to enter residency. Crazy girl, she was traveling through northern Somalia and Djibouti, crossing unmarked borders and taking it all in stride. She also enjoys spending time living with tribes and had a great experience with the Hamer people in Namibia and was looking forward to spending time with the Mursi people in southern Ethiopia.

We went out to Askalech Tej House, a traditional tavern where they serve Tej, a honey wine (mead) that's the popular drink of choice in Ethiopia. It's served in these glass flasks, a berele, and is really quite sweet, which masks its alcohol content. There are different strengths of alcohol and we got the strongest on offer, a 6%. These tej houses also feature traditional music and the entertainers encouraged the guests to dance with them by getting low and rolling the shoulders to the beat. 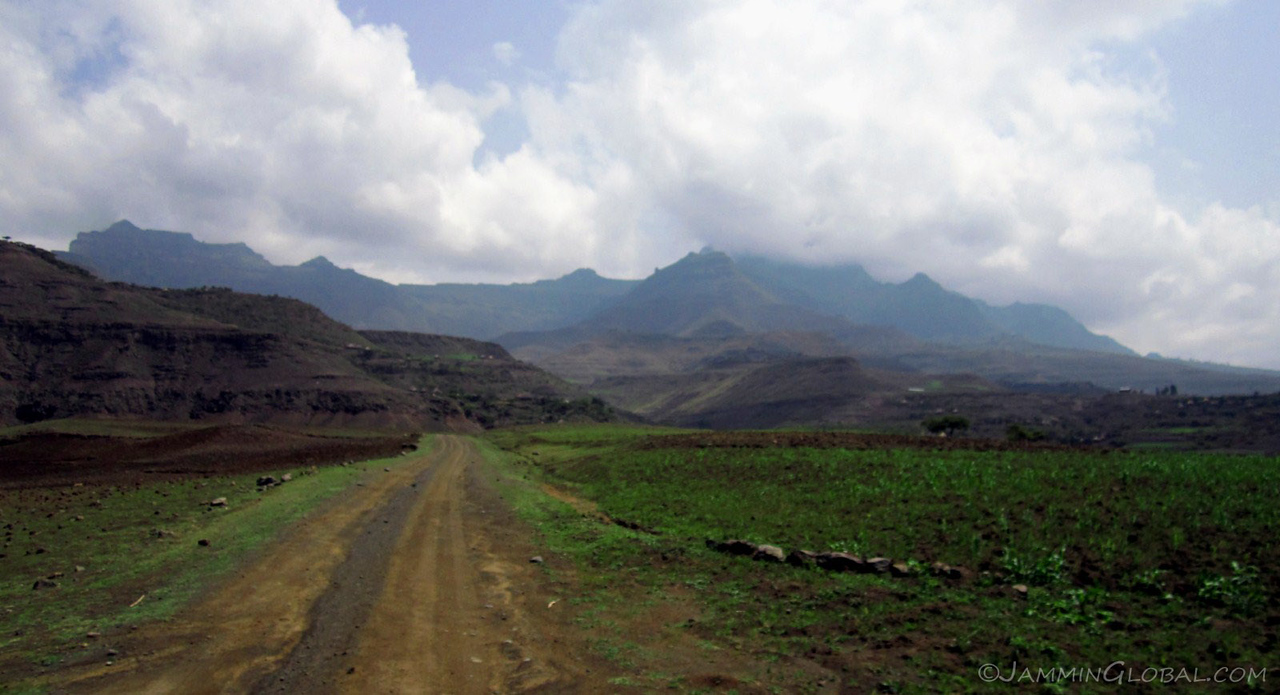 As I got closer and started to climb my way back up, I could sense how steep these mountains were and these cathedrals of stone were just as impressive to me as those in Lalibela that man had put his mark on and given significance to. 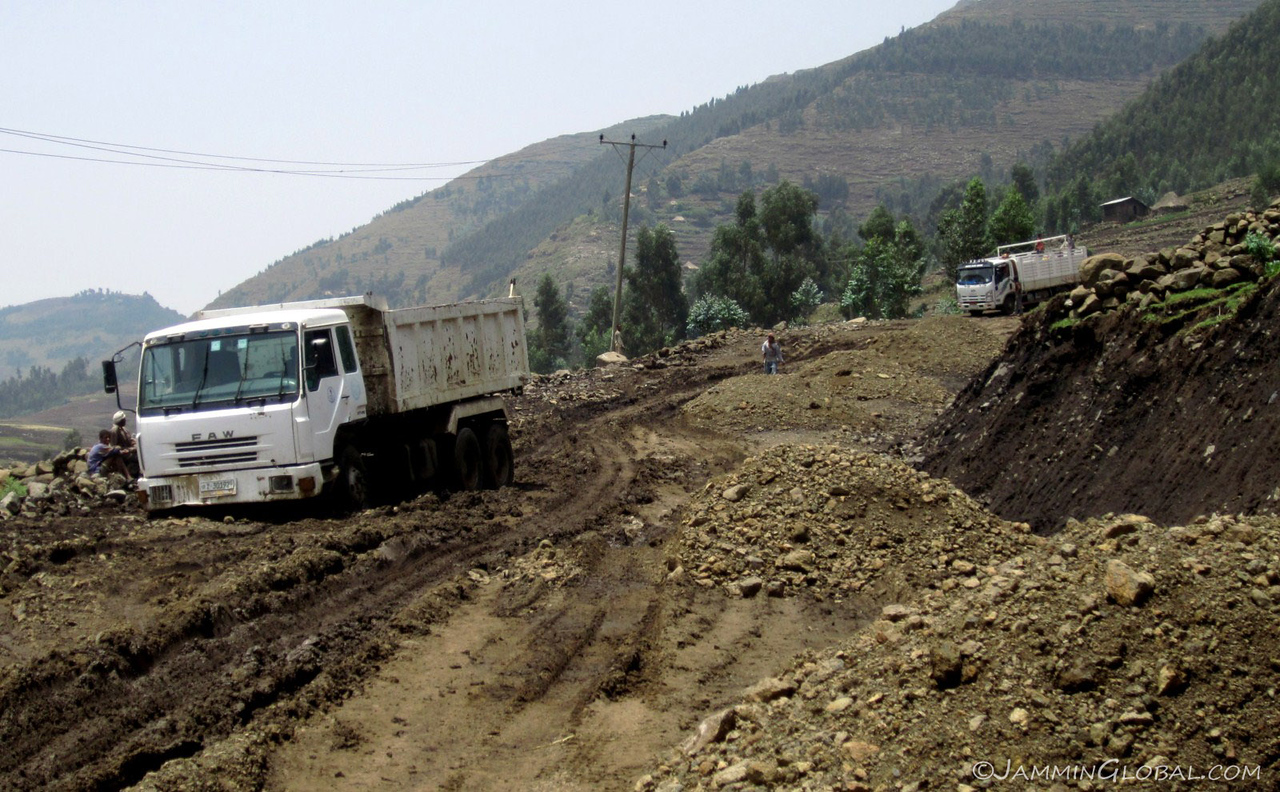 I took a different route back up the mountain from the one I had taken down to Lalibela and now I saw why the villager had warned me against this route; it was covered in soft mud that was deep and thick enough to mire trucks. This was the shorter route and I hoped the sun would dry out the mud, but nope. 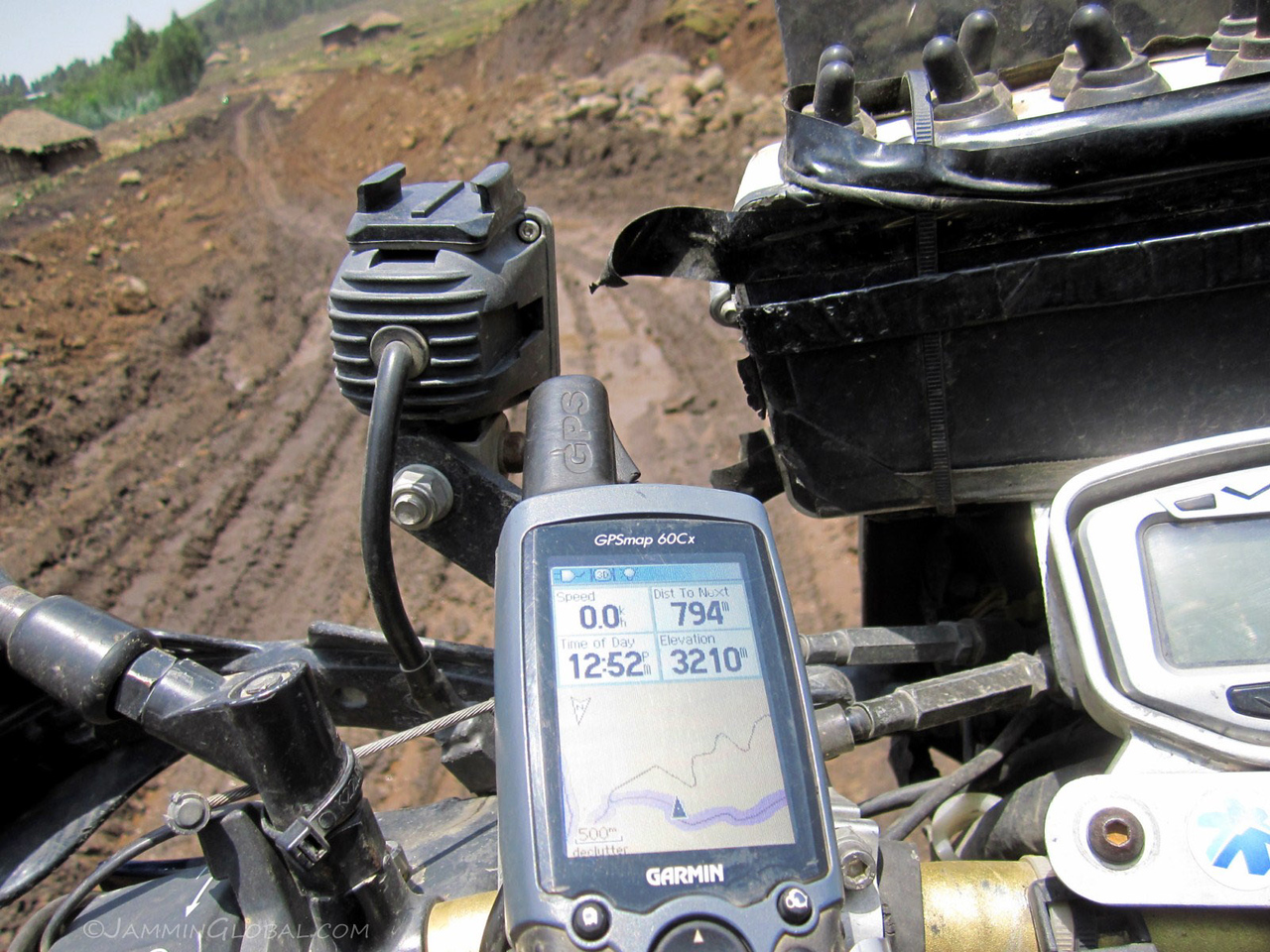 sanDRina and I struggling through the thick mud as we climbed past 3,210 m (10,531 ft). The end of this tough stretch was in sight; less than a kilometer to go, but we were taking frequent breaks as sanDRina's air-cooled engine was heating up in the slow-going first gear uphill crawl. In tough moments like this, I always say, "at least it's not raining." And if it's raining, then I'm thankful just to be alive... 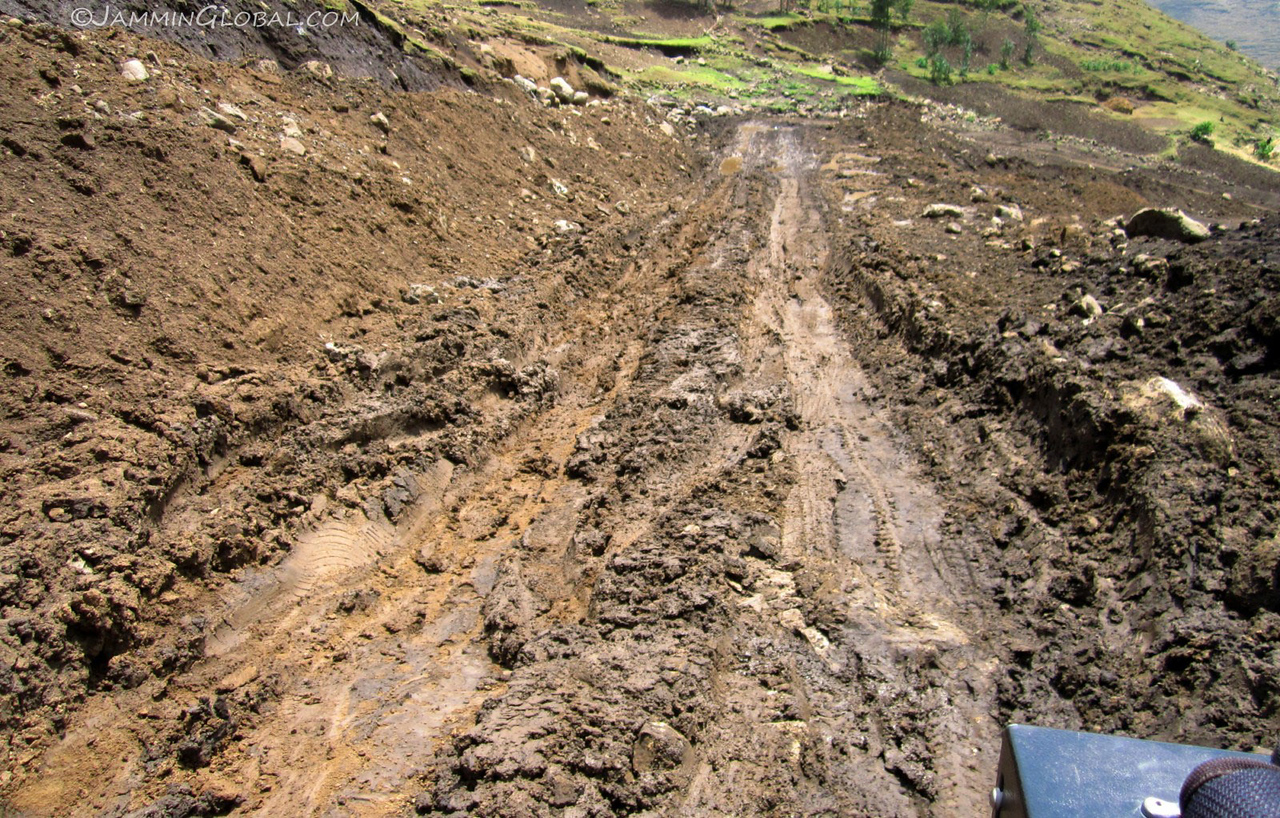 A look back at the thick mud that we had just crawled through. I'm glad I didn't go down this way in the rain. 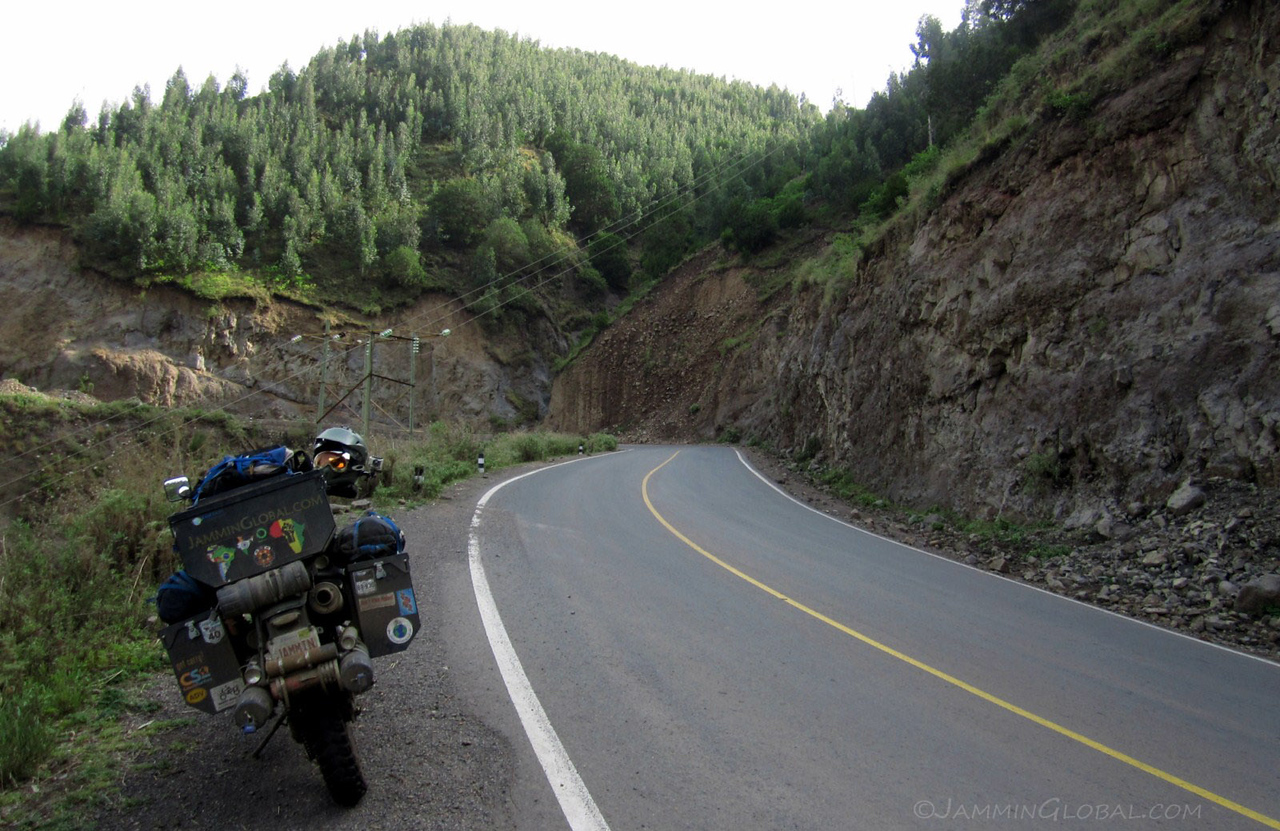 I love riding off-road but after struggling through all that mud, I was relieved to be on pavement again. From here, I was heading south to the capital, Addis Ababa.

I stopped for the night in the small highway town of Komblocoha and got a basic room at Sunrise Pension for 35 Birr ($2). That satellite dish is just for decoration.

Taking a walk through Komblocoha and coming across this horse buggy. These guys were moving along a good clip through town. 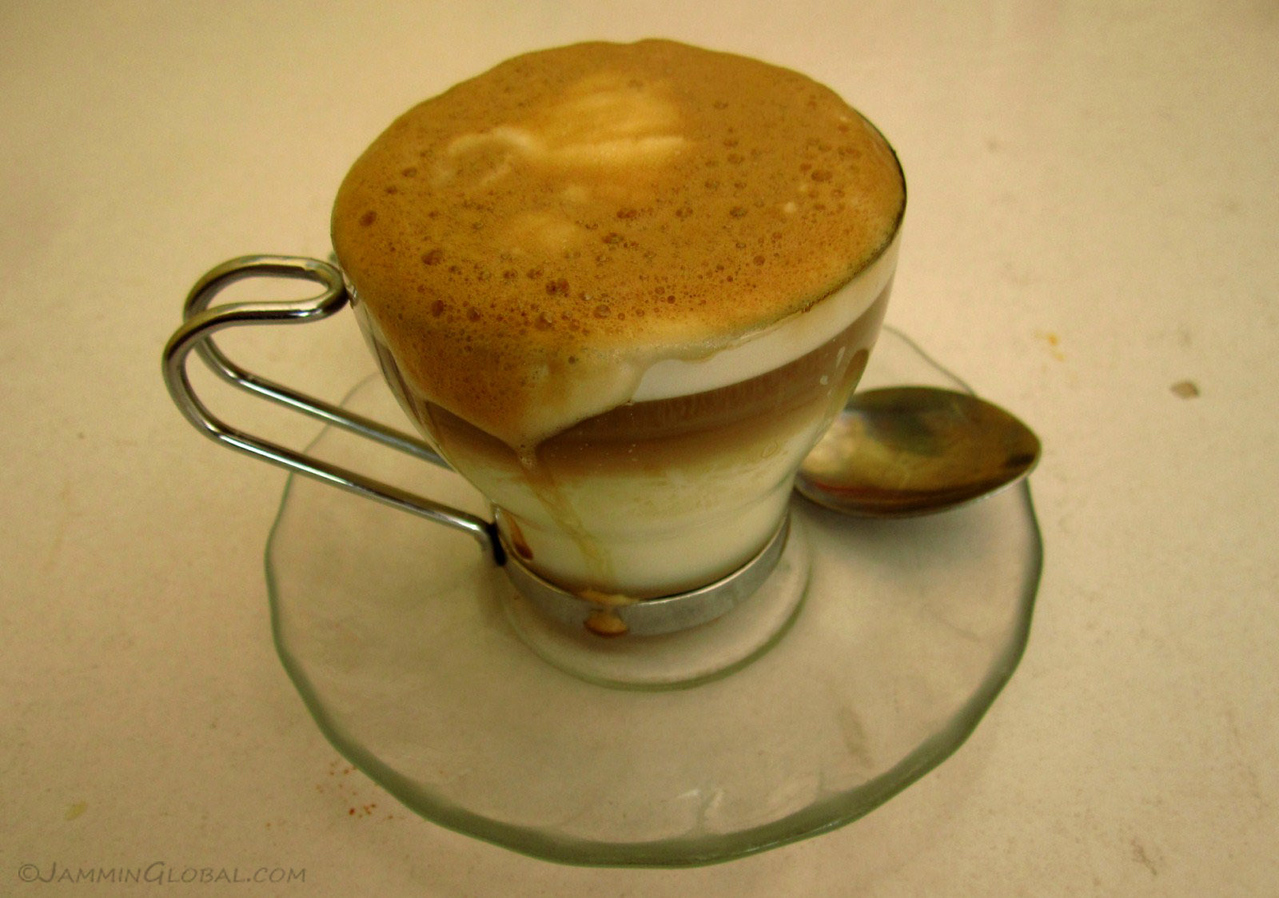 Enjoying an Ethiopian Macchiato for 3 Birr ($0.18), one of the delights left behind from the brief Italian occupation. It's different from a caffè macchiato, where the espresso is marked with a little milk, because here it's steamed milk that's marked with an espresso. I'm not a big coffee drinker but the taste of these macchiatoes were heavenly. I later learned the secret to their slightly caramelized flavor when a waitress told me that they add a bit of Ethiopian peanut butter (which is less sweet than western peanut butter) to the espresso. Mmm, I love food fusion. 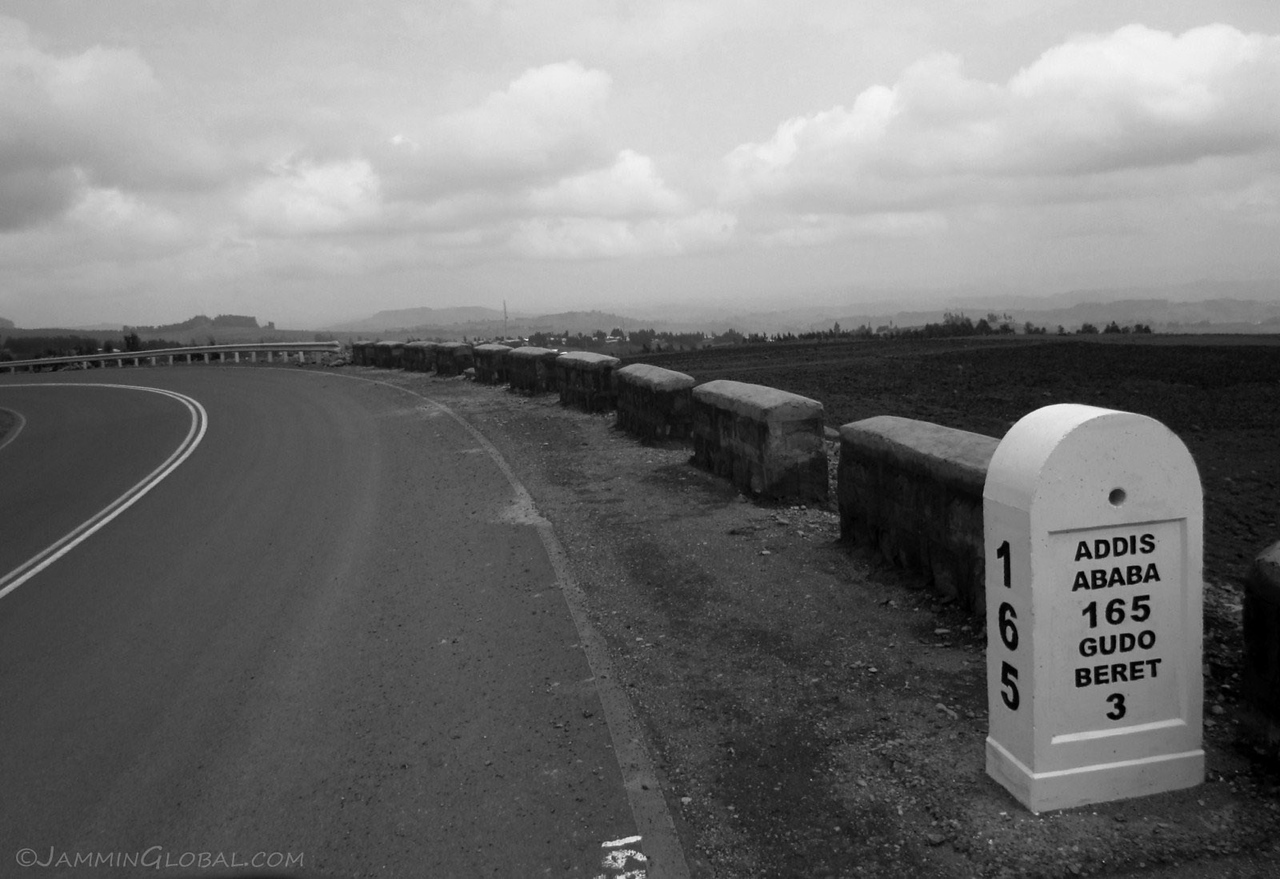 On the last leg into Addis Ababa, nearly a month after entering Ethiopia.

Not an encouraging sight for users of public transportation in Ethiopia. These mini buses are the main form of public transport and their drivers are really quite mad, overtaking big trucks around blind corners and driving way too fast on all these brand new curvy roads. Many people say traveling by motorcycle is dangerous because even if I'm a careful rider, other dangerous drivers could cause me to crash. But I'd rather be in control of my own machine, slowing down and stopping when I feel it unsafe rather than take public transport where the drivers don't prioritize your safety. 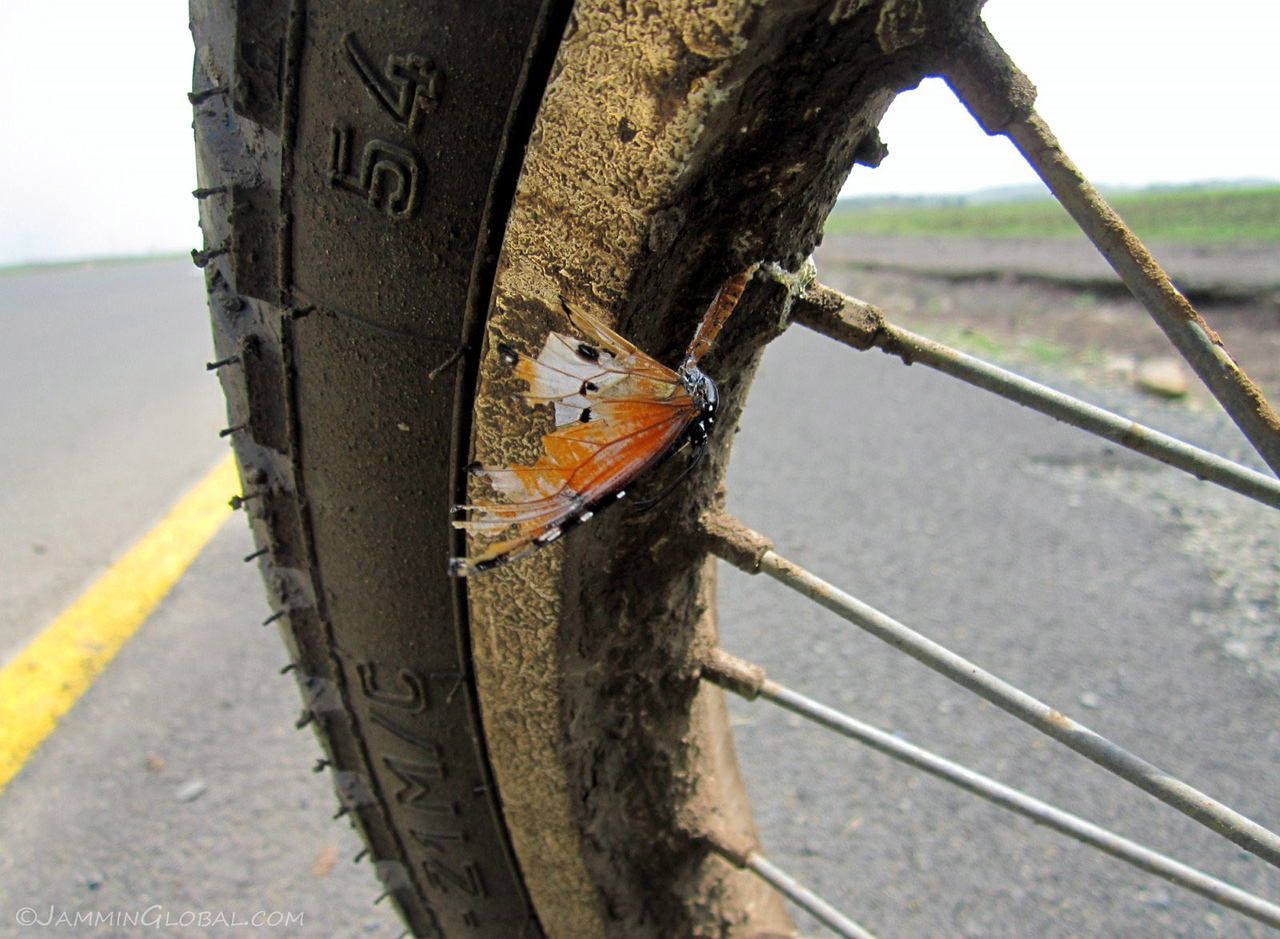 Taking one last break before heading into Addis and noting this butterfly that got caught in my wheel._

Lalibela is the biggest tourist site in Ethiopia and it's definitely worth a visit. I had good timing as I could be there with only a few other people around, which gave me the space and time to absorb the grandeur of those monolithic churches. It was amazing to be there in person and marvel at how the designers had to visualize the whole church in their heads and devise their plan for carving it out and not being allowed even a single mistake. Lalibela is a fine example of the impressive capacity of human beings to execute on an idea once we decide we're going to do it. Even if it seems impossible to the cynics, the rational optimists see the way forward and make it a reality.