Ethiopia, Part 4: The Semien Mountains, The Roof of Africa

North of Gondar lies the impressive natural landscape of the Semien Mountains, a large expanse of volcanic origin. This rugged area is a part of the Ethiopian Highlands, which began to rise up 75 million years ago and subsequently got eroded as the East African Rift opened up along with the natural erosive forces of wind, snow and water. The landscape is dotted with the exposed cores of old volcanoes that make for epic vistas.

Surrounding the Semiens are savannah and deserts, so this unique environment has many endemic species of wildlife, like the Gelada Baboon, Walia Ibex and the Ethiopian Wolf. As this landscape rises so dramatically from the depths of the Afar region and the Sahara to the highest peaks past 4,500 m (14,760 ft) the Ethiopian Highlands have been dubbed the Roof of Africa.

Showcasing the best of the highlands is the Semien Mountains National Park, accessed from the town of Debark. I over-nighted in the park on my way around the northern loop through Ethiopia and got to see lots of Gelada Baboons, Lammergeyers (vultures), some deer, bear tracks and lots of impressive views from the steep escarpments that define the park. 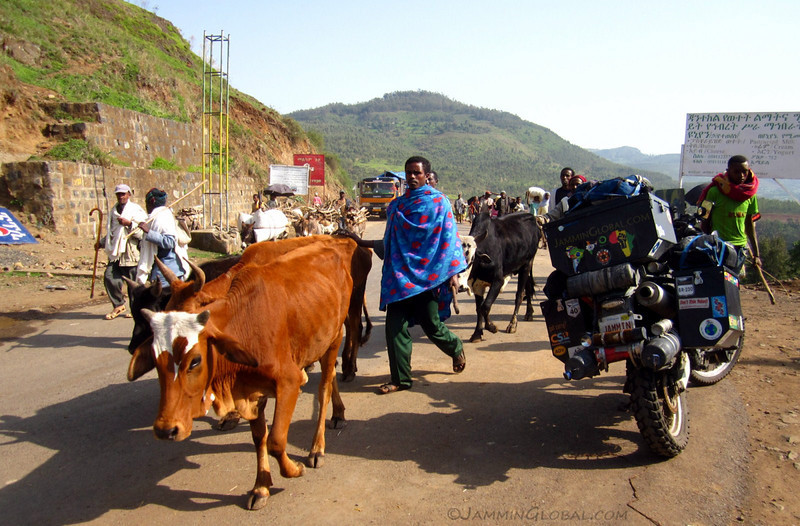 I had breakfast at the outskirts of Gondar and enjoyed watching people streaming past with their livestock and other goods to sell in town, as it was Saturday, which is a major market day in Gondar. The road was packed with cows, goats, shepherds, villagers carrying grain and donkeys carrying firewood. It felt like the road wasn't really for motorized traffic, but more for hoofed traffic. 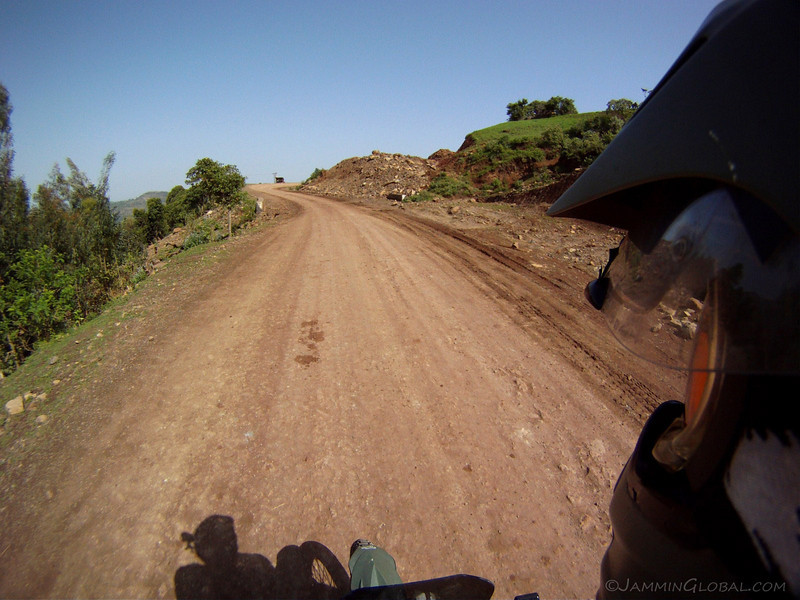 A few kilometers north of Gondar the asphalt ended and I smiled when I lowered the air pressure in my tires and stood on my pegs. 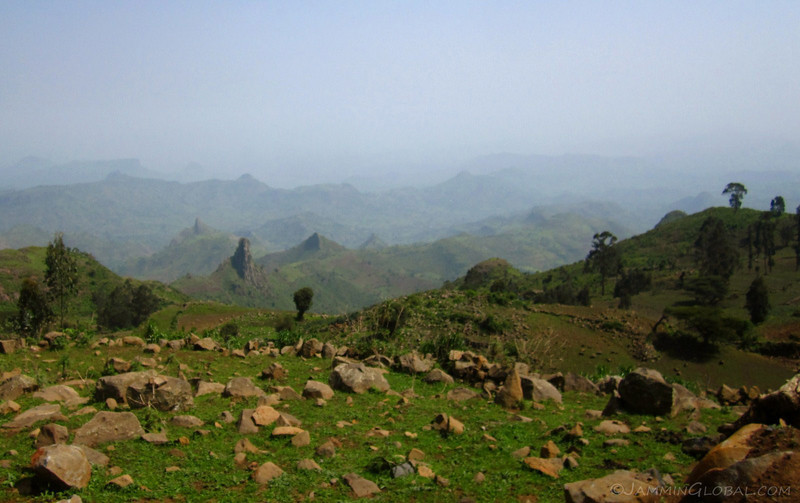 The Ethiopian Highlands. The landscape is jagged and endless. I was salivating for the views that I was told about further north.

The route climbed up from the 2,100 m (6,890 ft) at Gondar past 3,050 m (10,000 ft) with lots of elevation change in-between. The Tracks4Africa mapset contained the dirt road that I was on and even the major towns along the way, which helped me in my day-to-day route planning.

Running into Laurens and Emma, whom I met at Tim and Kim's a few days ago. They were on their 90 day honeymoon from London to Capetown. They are both management consultants, working in New York and bought this fully-equipped Land Rover Discovery from Footloose expeditions. They were coming back from the Semien Mountain National Park and told me they were side-swiped by a local bus on a narrow road. 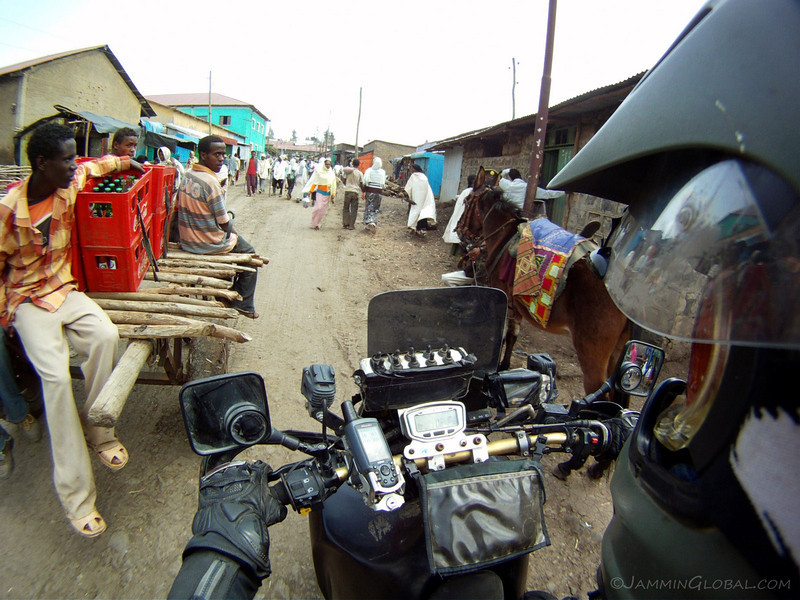 Passing through the busy town of Debark, from where the turn off to the national park is. I'm sure I look like an alien to the locals with all my gear, but hey, safety first. 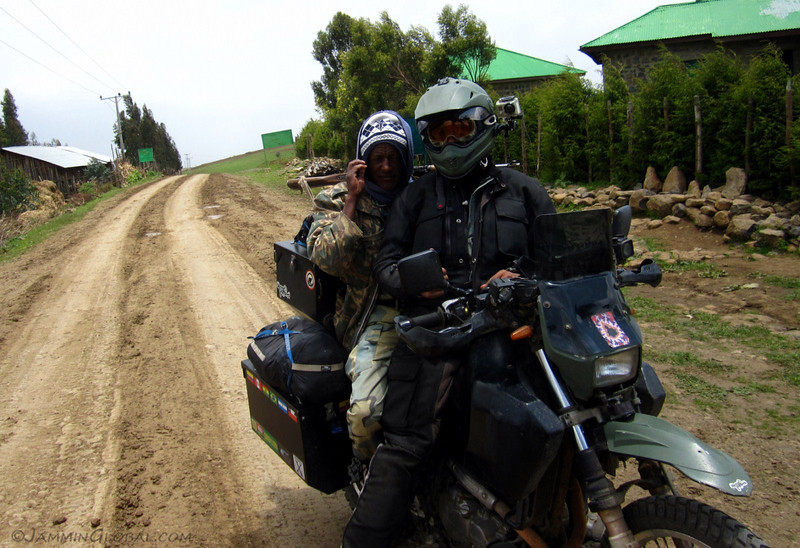 Picking up an armed scout at the entrance to the Semien Mountain National Park. It's park regulations because the animals (namely the baboons) could possibly attack, which I don't think really happens. I had to leave behind my back rest to create space for him.

Within a few kilometers of entering the park, I was greeted by the sight of numerous Gelada Baboons or simply Geladas. 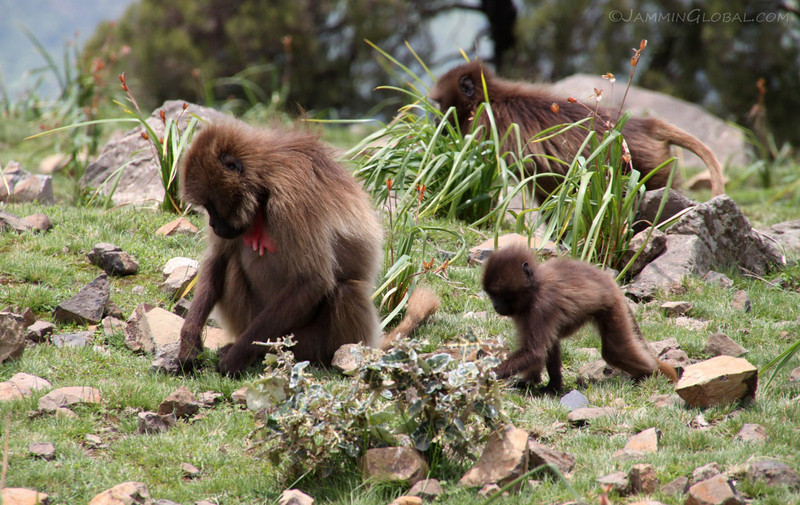 Geladas are unique to the Ethiopian Highlands and can be identified by the bright-red patch on their chest.

An adult male gelada and a youngster sneaking into the photo. Elevation was around 3,200 m (10,500 ft) and the winds were cold and strong, but the gelada is well-suited to this environment with its shaggy coat. 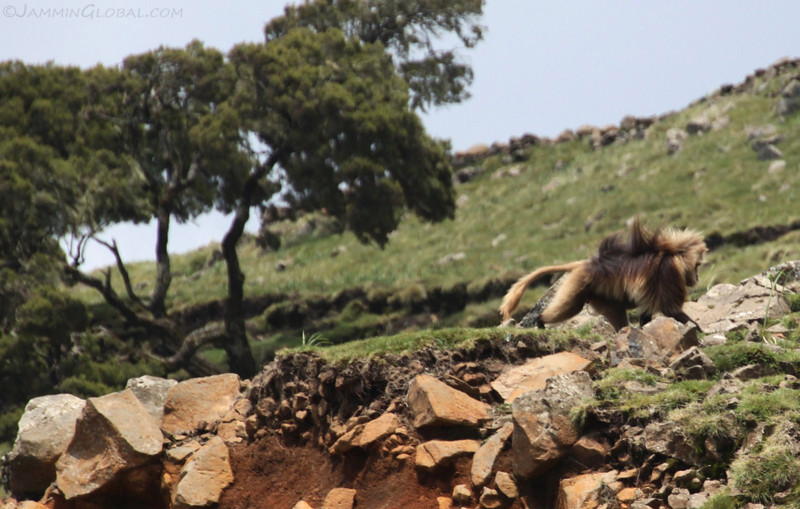 A gelada patrolling his territory, unfazed by the strong winds of the Semien Mountains. 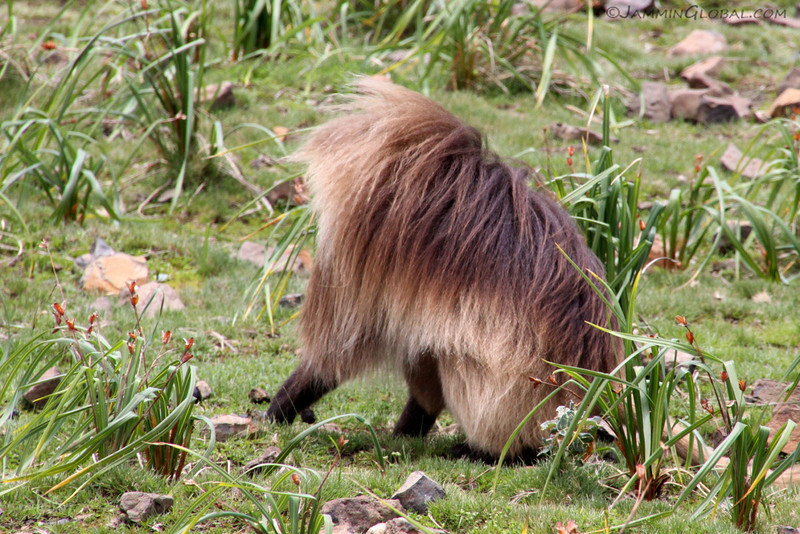 A close-up of the unique mane of the gelada.

They forage on the tops of the plateaux during the day and retreat to the cliffs at night where they sleep. Since there aren't that many trees or abundant food sources, geladas are unique among primates in that grass makes up more than 90% of their diet. This means they spend a majority of their day picking and chewing grass.

A male gelada showing off his pink chest, necklace and his exposed penis.

Riding on further into the park, I came across this dramatic U-shaped drop in the escarpment. Just like the Grand Canyon, the layers of rocks from different eras are visible due to erosion. The layers at the bottom are older basaltic lava flows, which are covered by more recent flows. Standing on the edge of the cliff, I felt a rush of air rising up the steep sides down from the valley below.

The dirt track that winds its way along the escarpment deeper and deeper into the Semien Mountains National Park. 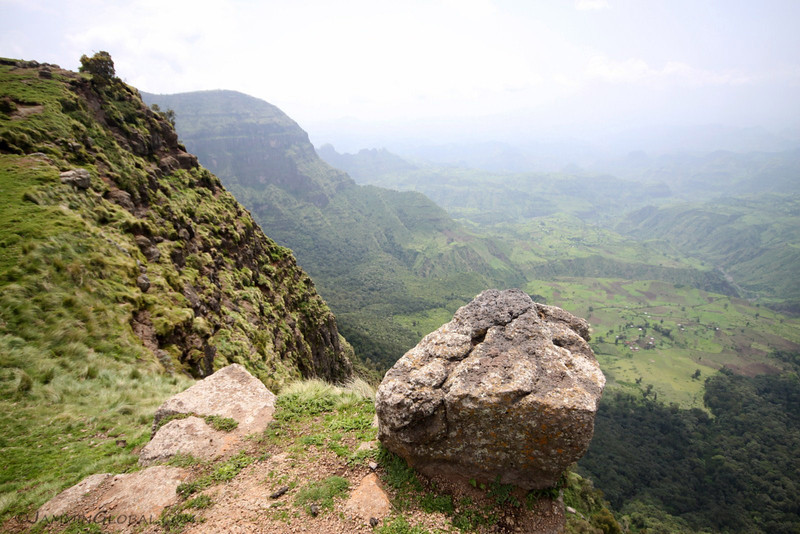 A boulder, sitting on the edge of the cliff, with great views of the valley below.

Trees clinging on to the steep sides of the Semiens. The dirt track is visible in the distance as it rides the ridge towards the first encampment of Sankaber, where I would be spending the night.

The national park is inhabited by locals and children came running up to my bike whenever I stopped. 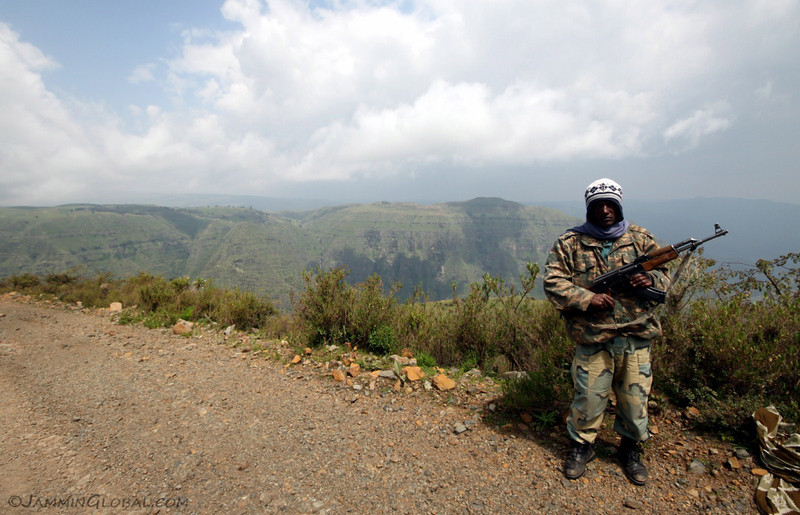 My armed scout in the Semien Mountains National Park. He was very friendly and told me where to stop for good views. 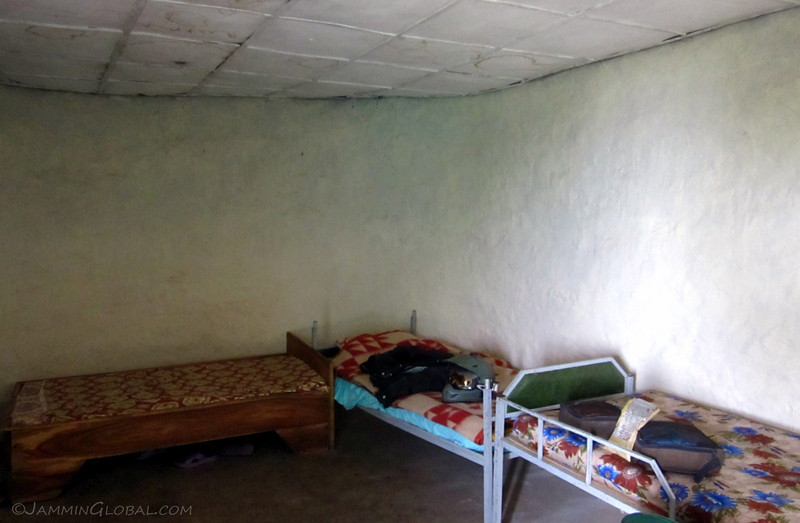 My bed for the night, which came with lots of warm blankets.

I asked the scout if I could take a bath somewhere and he directed me to this open shower. Using development funds from Austria, they've built a small tank and tap system using the nearby stream. 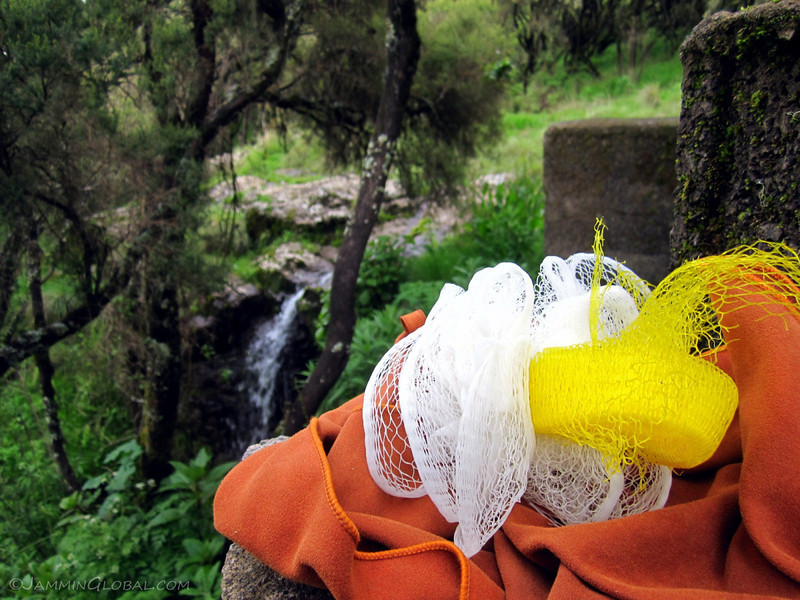 I got my loofa and camp towel out and...

...prepared for a cold, cold shower in the forests of the Semien Mountains. I enjoyed it and thought about the cold showers I took when I was riding through the Andes in Peru. Even if it's freezing cold, splashing water on my body at the end of the day has become a required ritual.

The views from Sankaber as heavy clouds rolled in over the Semiens.

Deep valleys cut by water and ice. During the last Ice Age (which ended around 12,000 years ago), the Ethiopian Highlands were covered in glaciers that left their mark on the land in the form of U-shaped valleys.

That evening, the heavy rains came with hail, but I was warm in the blankets.

Sunrise over the Semien Mountains. 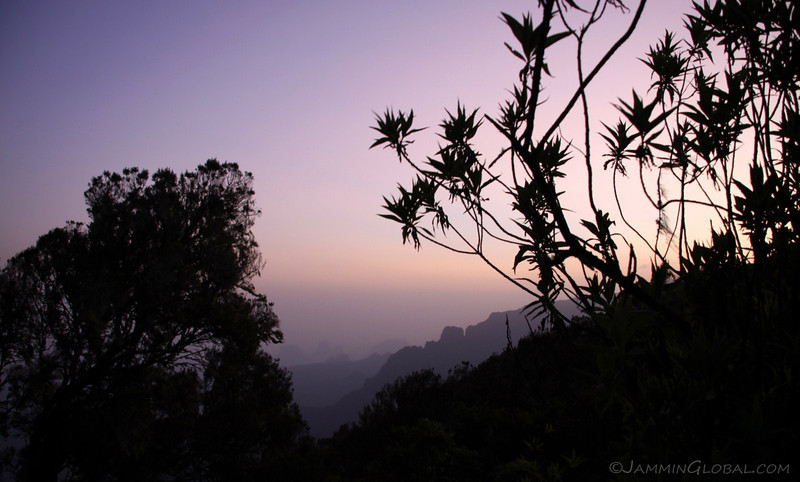 Silhouettes of flora as the sun rose over the eastern edge of the Semiens.

My scout took me for a walk just after sunrise and we came across some bear tracks. 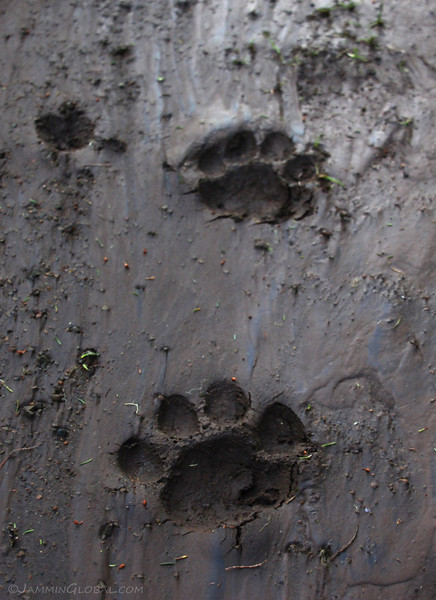 Beautifully captured paw prints in the soft mud near my lodge. 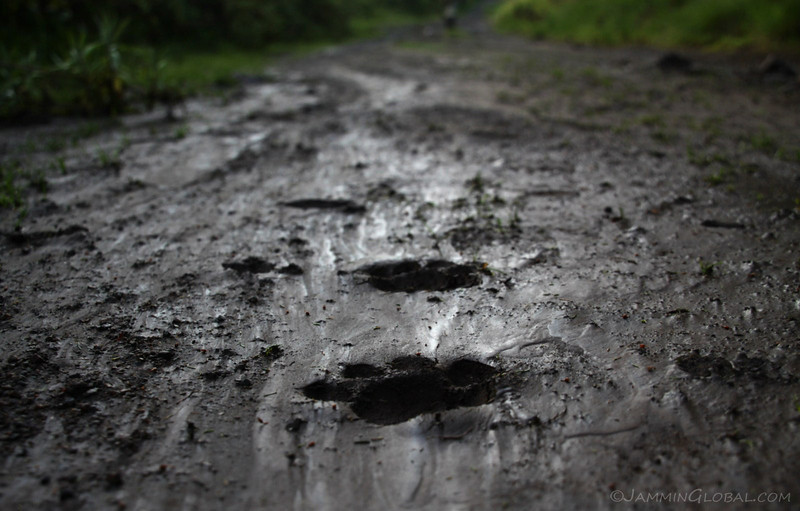 I felt like my scout could've taken me to the animal whose prints these were. He was connected with his landscape and felt at home in the Semiens. 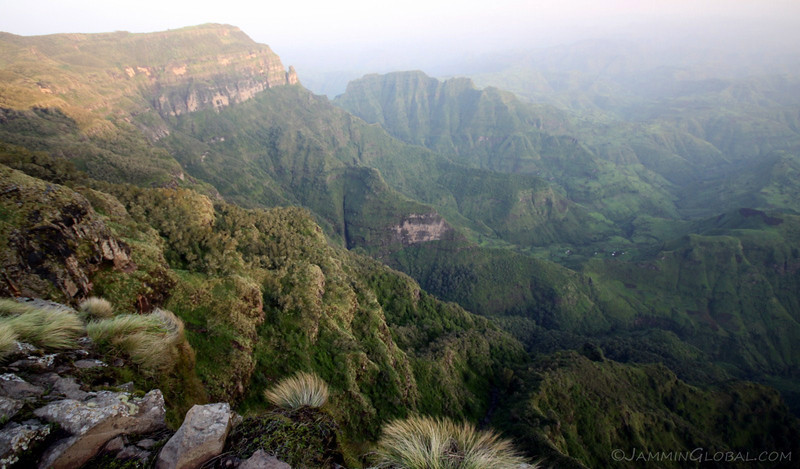 An epic vista that my scout brought me to, just as the sunlight was slowly working its way down into the valley. 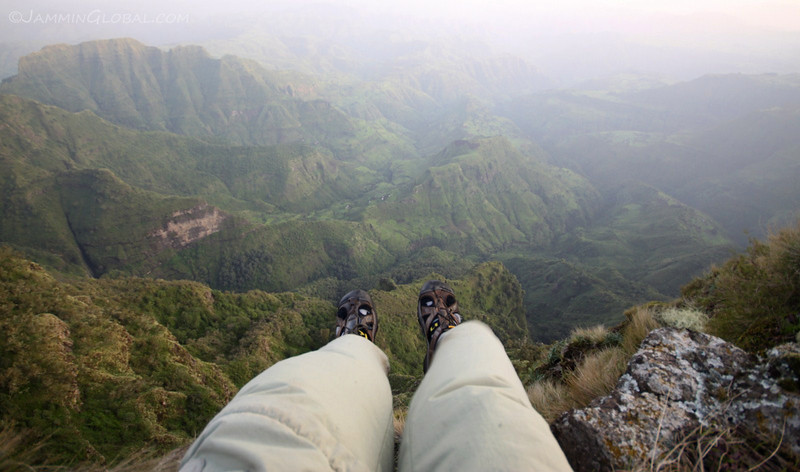 I sat on the edge and enjoyed the rush of air up my pants. 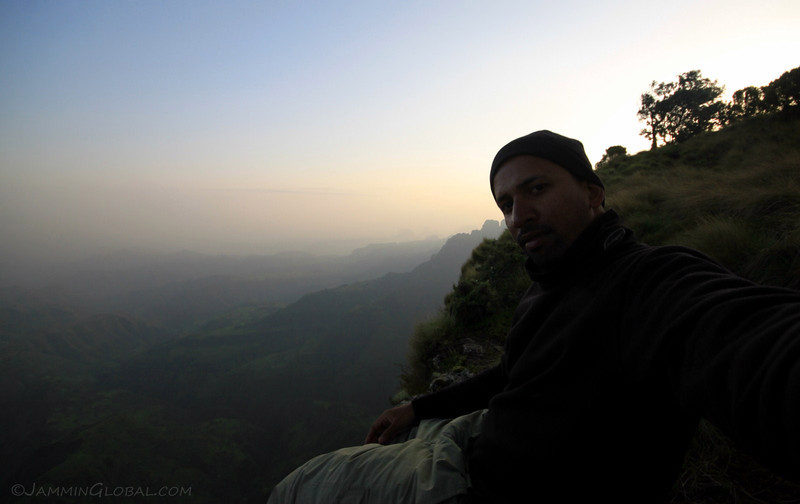 Sitting on the edge of the escarpment in the Semien Mountains National Park. I felt like a bird and wished for a hang-gliding wing to jump off and soar like... 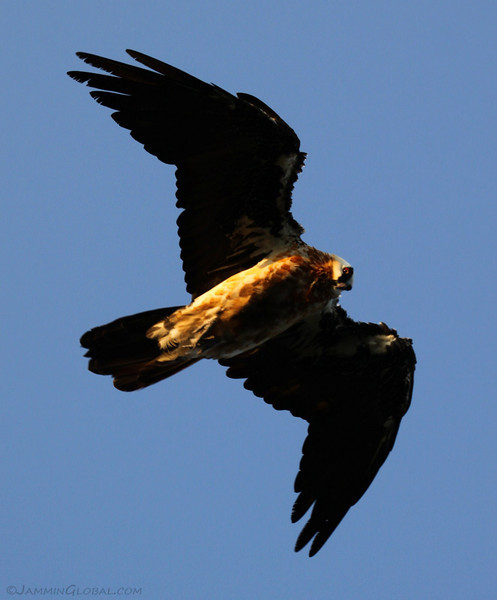 ...a Lammergeyer. These Bearded Vultures soar the thermals that come rushing up the steep sides of the escarpment. They are scavengers like other vultures, but their diet consists mainly of bone marrow, which requires them to drop big bones from height onto stones, exposing the nutritious marrow. 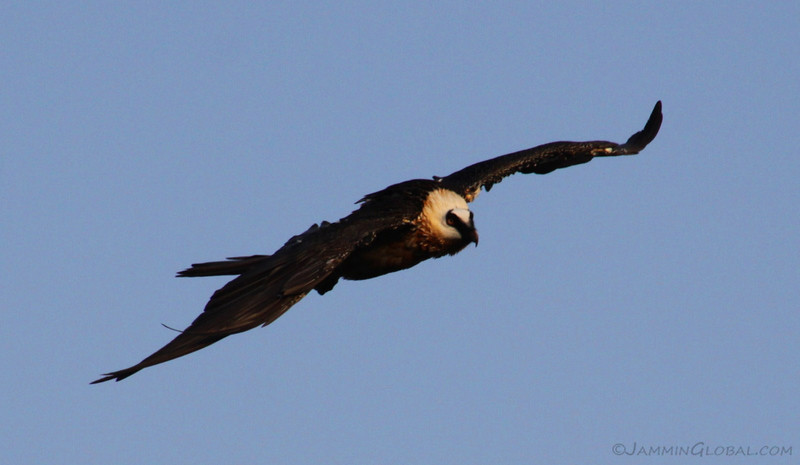 A Lammergeyer coasting on the thermals with its wings at full span, reaching around 2.5 m (8.2 ft). Its raised left wing tip aides it by reducing lift-induced drag and smoothening the vortex energies that form at the edge of the wing. This feature has been adapted to newer airplanes to reduce fuel consumption, among other benefits. When people question what's the point in conserving habitat for some random bird, they should be reminded of the lessons that nature can teach our technically-advanced society. And hopefully that will also instill some humility towards our place in nature.

Enjoying the steep cliffs of the escarpment in Semien Mountain National Park.

The exposed cores of volcanoes that define the landscape of the Semien Mountains.

Walking back with my scout, who blends in with his natural camouflage. 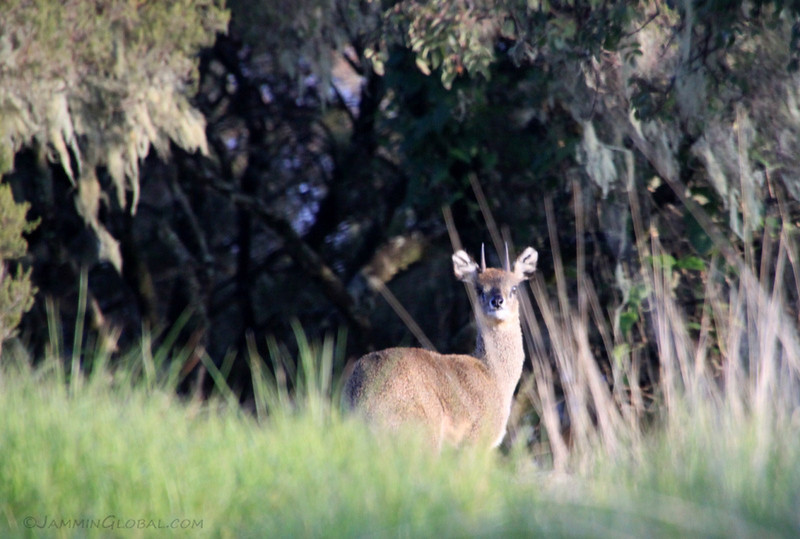 A small antelope among the grasses on the plateau of the Semiens. 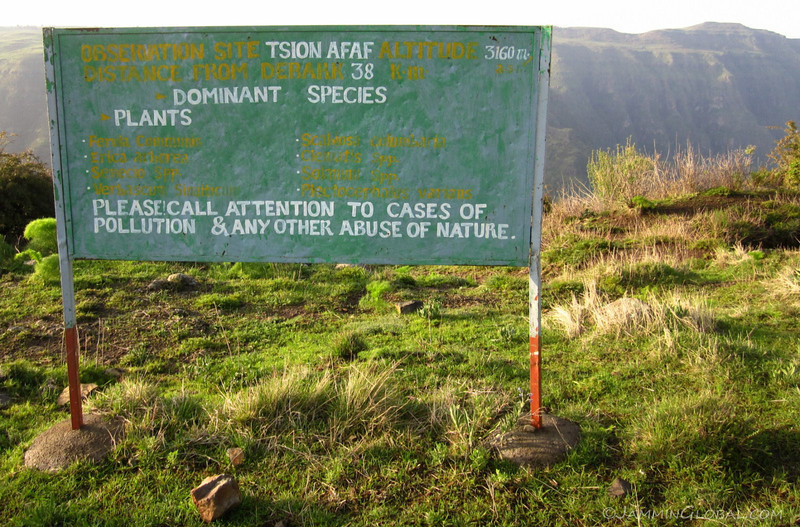 On my way out of the park, I came across more geladas grazing in the morning sun. 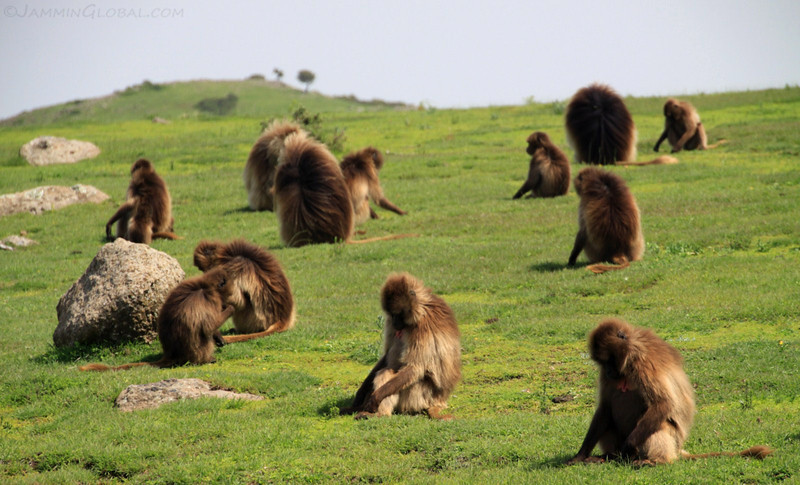 The morning time is for socializing and foraging. 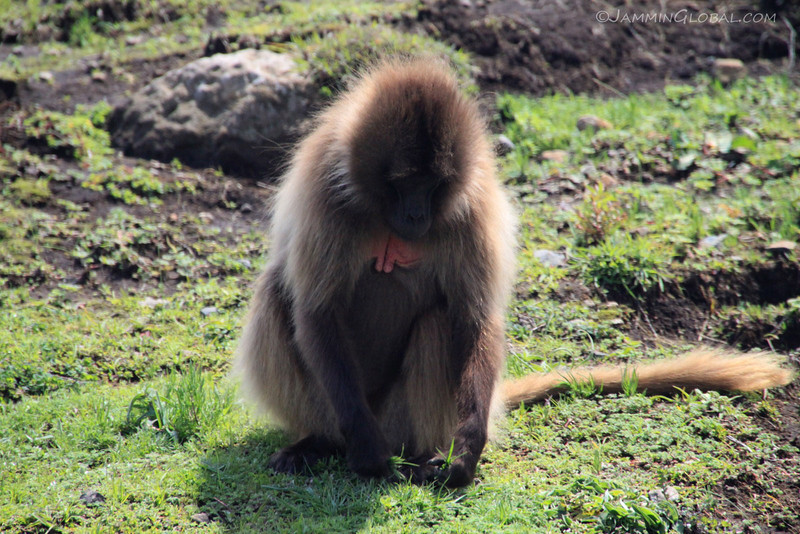 Since they primarily eat grass, geladas have developed the grasp needed to clump grass together and pull it.

Aww, who's got a mouthful of good eats?

Grooming is also part of their morning routine. Since geladas sit on their bottom for much of their day, it's become hard and callus, unlike other baboons who have a colorful bottom. 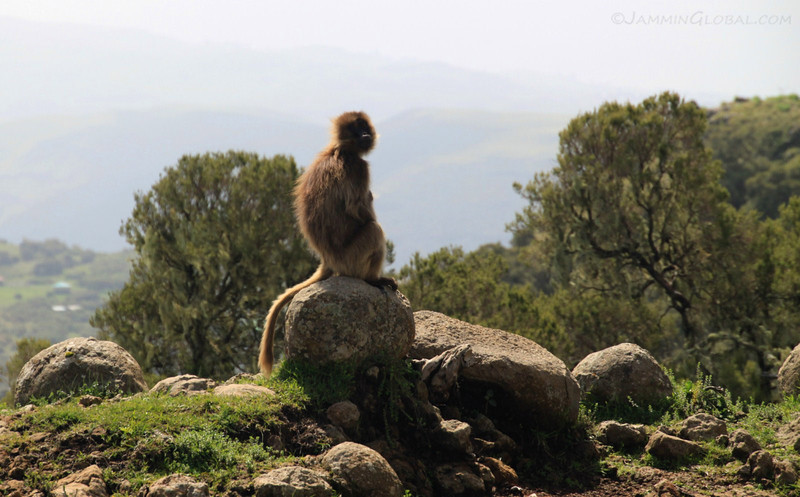 As geladas graze on open ground, they need a sentinel to keep guard of swooping lammergeyers and other predators.

The sentinel sounded the alarm and everyone looked to him. 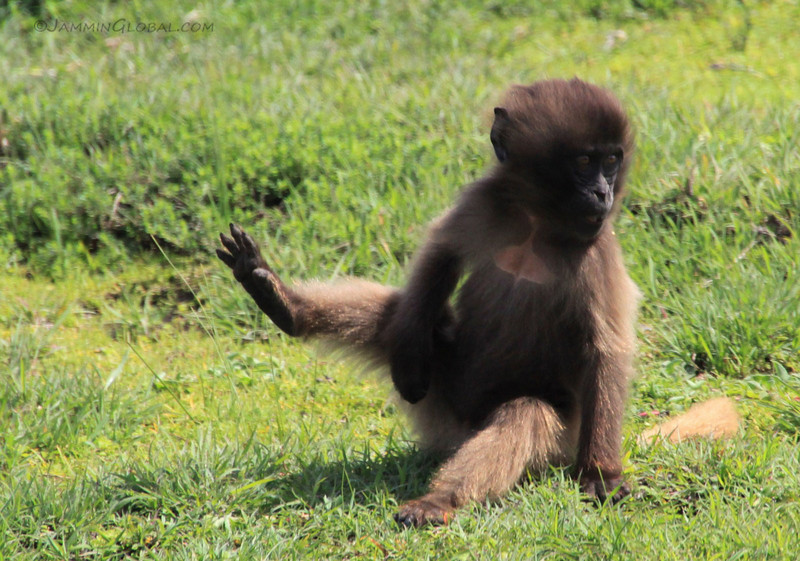 But this little bugger isn't bothered by some false alarm. He's scratching and enjoying a good rub. 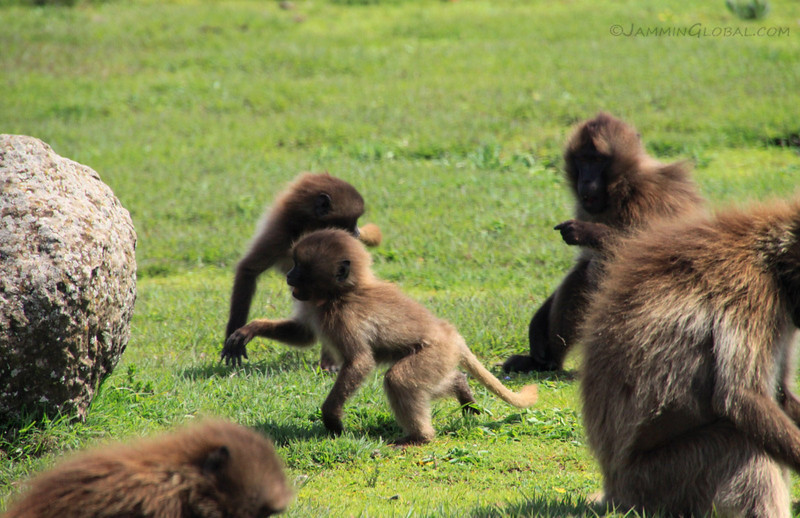 He looked like he was up to something, so I kept an eye on him.

He climbed up this rock and when he picked out his victim...

...pounced and grabbed his buddy. Score!

He might be cool on the playground but mom needs to groom him now.

A shepherd and his sheep in the national park. Many locals live within the park, as they have for generations, but now there's conflict between conservation of the fauna and flora in the park and the livelihood of the local inhabitants. They complain that the geladas come and destroy their crops and harass their livestock. And the conservationists complain that diseases spread from livestock to the wildlife. A compromise is needed to keep this situation sustainable.

Horses grazing right next to geladas in the Semien Mountains.
_
I only had a short visit to the Semien Mountains National Park but managed to get an appreciation for this unique landscape, the Roof of Africa. Steep escarpments with grazing gelada baboons and soaring vultures - the park showcases the Ethiopian Highlands in all its glory. Next up was a few days of riding north of here through similar landscape that could all be a national park.

Next: Ethiopia, Part 5: Off-roading in the Highlands