This journey, for me, becomes magical when I meet strangers whom I have a great connection with. My decision to camp by the Nile opened up a wonderful experience of getting to know some fishermen of the Sudanese Nile. Saleh invited me to stay for as long as I would've liked and even though we couldn't speak a common language, I felt a genuine bond with him. Of course, it helped that Mohammed Bashir was there, who could speak English and Arabic and communicate for us.

This next photostory shares my view of Quikkah, the village that Saleh and his family live in. Their house is next to an old tomb that provided some excellent shots and I also managed to test my hand at rowing the fishermen's homemade felucca.

The mud houses of Quikkah, along the Sudanese Nile. It hardly ever rains here, so building with mud isn't an issue. The mud is taken from the fertile sediments that the Nile deposits along its banks. sanDRina was parked under the little shade that I could find. 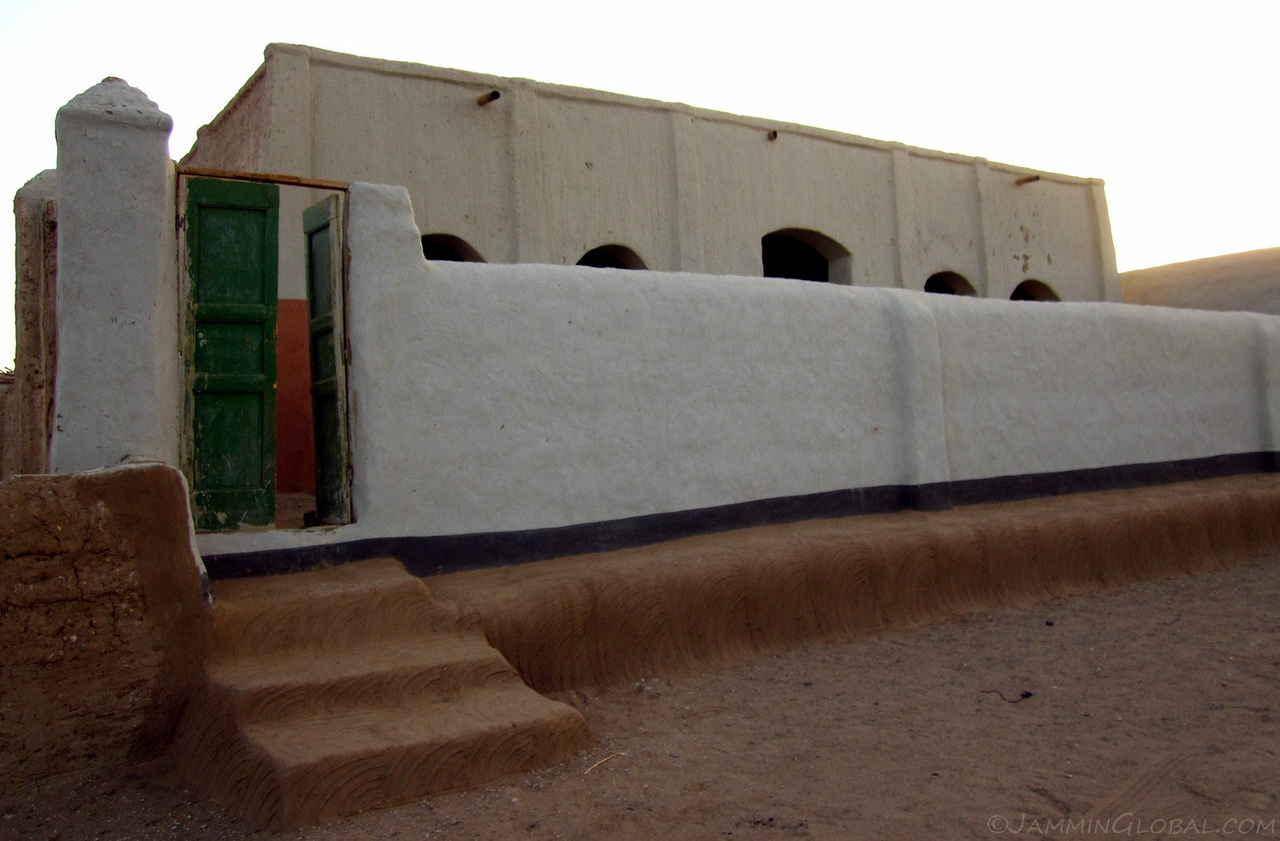 This is Saleh's house that I stayed at for five days. They don't have any vehicles, besides a boat, so a gate for parking isn't a design feature here. But private property is extremely respected, so I had no qualms about parking sanDRina outside.

Detail of the swirls in the mud patio surrounding Saleh's house. The straw that's showing through is used to reinforce the mud.

Gelabiyas (men's robes) drying in the courtyard of the family's living quarters. Being a Muslim culture, outside men are kept away from the family women and I usually stayed in the guest quarters but was allowed to walk around to take some photos. Saleh's house sits under a towering tomb that I made way to. 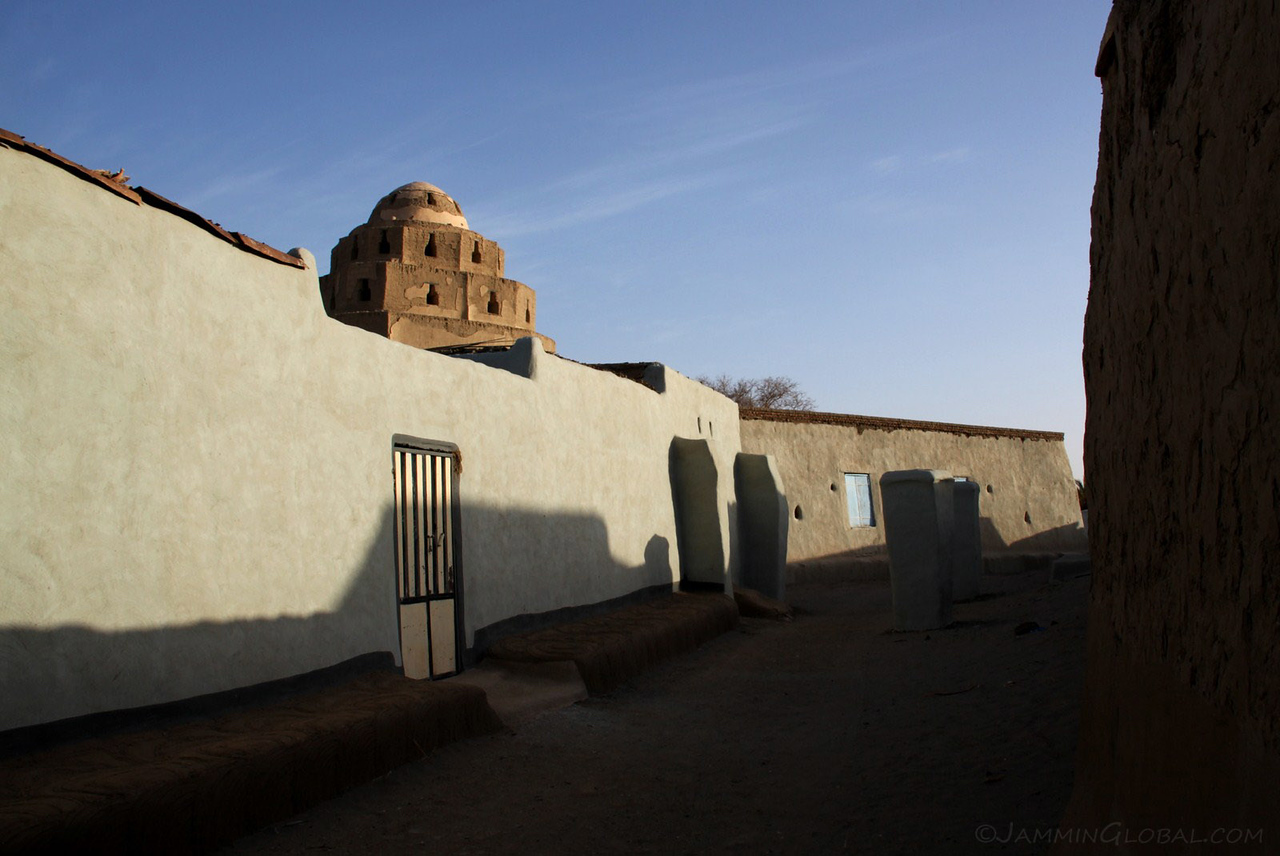 The streets of Quikkah. It was quiet, as most inhabitants have moved to town or down to Khartoum. I enjoyed the softness of the colors and the rounded-edges of the mud construction. 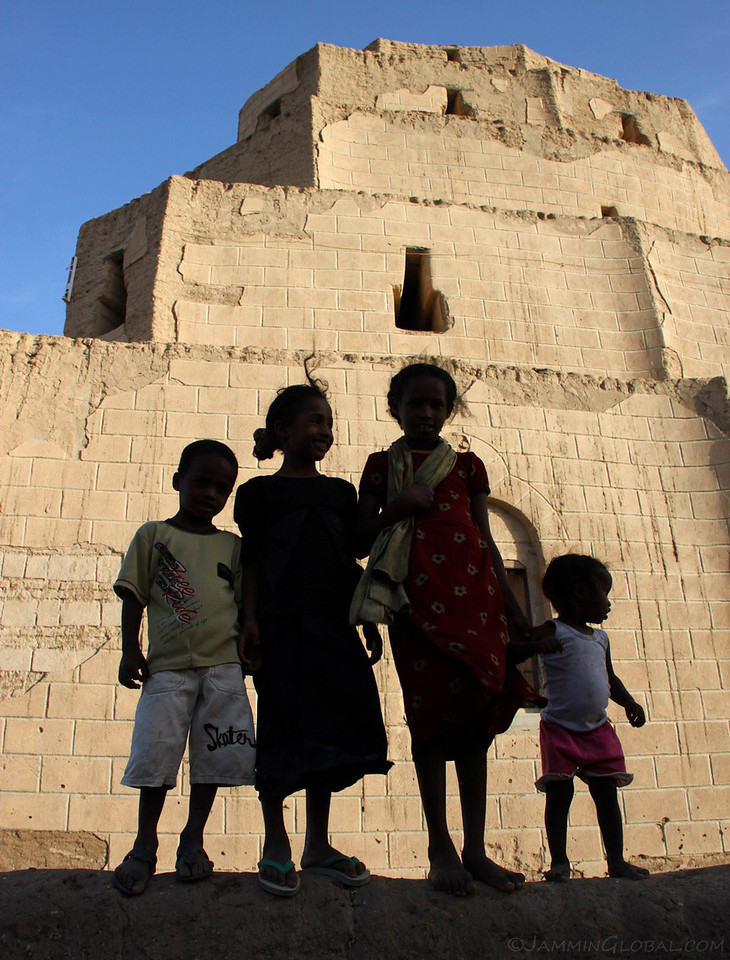 Saleh's children followed me around and were extremely eager to show me the tomb. 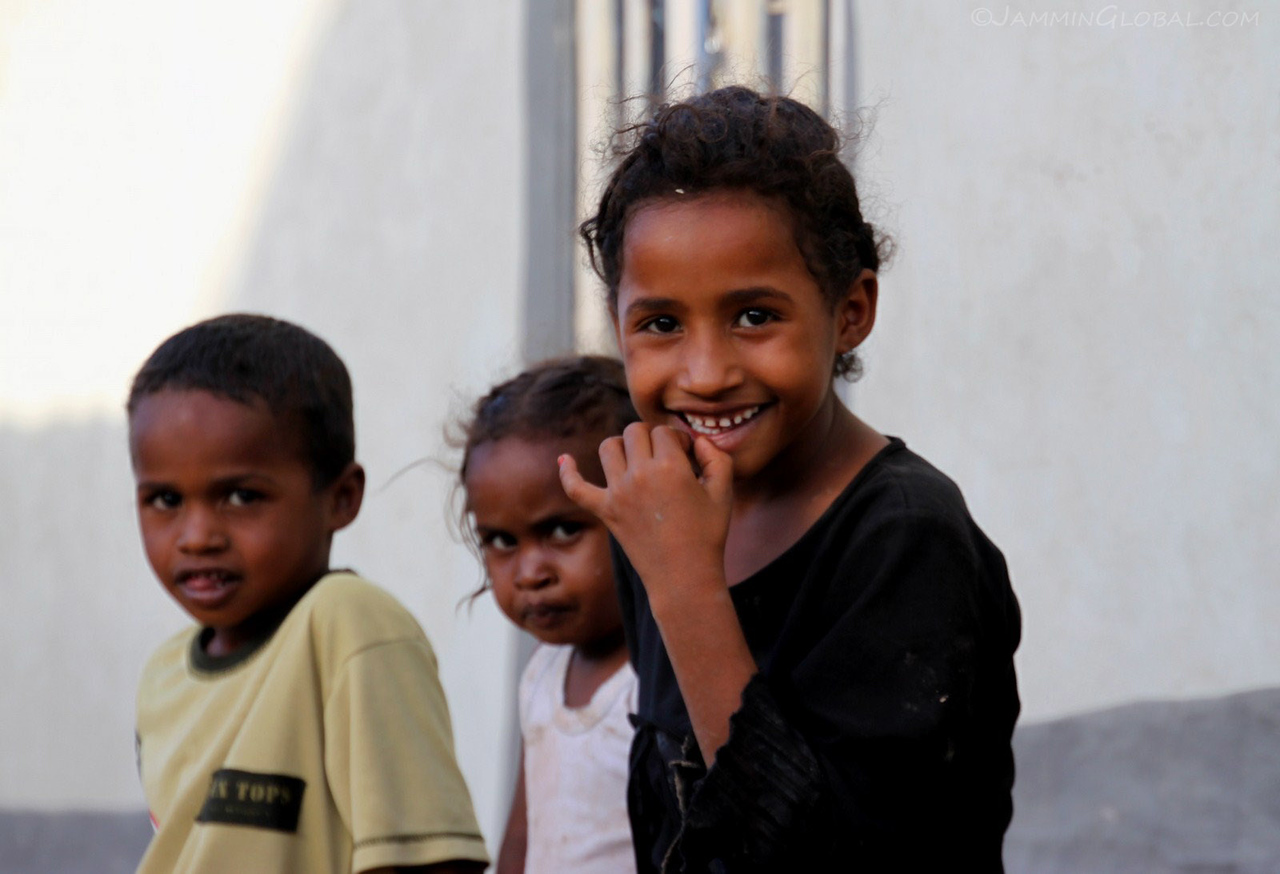 Noussa, Magda and Hamoudi, children of the richest man in the village and being spoilt accordingly. Their excitement at this new stranger in their house was uncontrollable.

Hamoudi gesturing his displeasure at my refusal to allow him to hold my SLR camera. That looks like a pretty aggressive gesture to me.

The tomb at Quikkah. Mohammed told me it was more than 300 years old and that Saleh's family was probably related to the sheikh that was buried here. The survival of such a large mud structure is testament to how little rain falls here and of course, the great engineering skills of the builders.

Inside the tomb and looking up the multi-storied mud tower. The small openings for light and air lead your eyes to the central opening on top.

A stitched four-wall shot of the inside of the tomb. The green structure might be the actual tomb and on the right are probably family and other important members of the buried sheik. The globe mobile hanging in the left caught my attention. 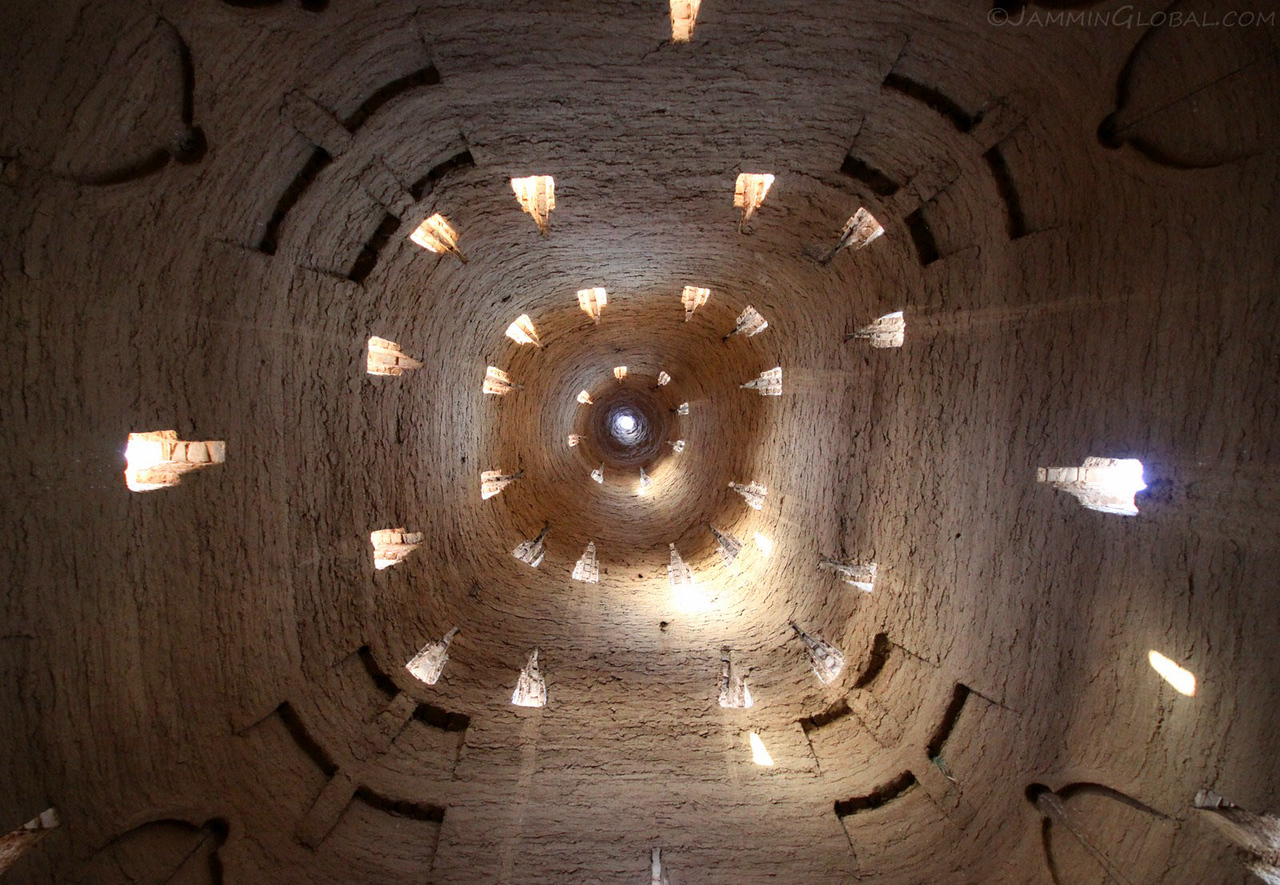 A balanced shot of staring straight up the tomb's tower. The pattern of the windows was hypnotical. Early design for a worm hole...?

A wide-angle shot outside the tomb with a customary outdoor drinking water shed on the right. In the dryness and serious heat of northern Sudan, having access to water is critical and I saw clay pots with water outside many homes. It's a way of caring for your fellow human in this harsh climate.

Pillars in vain? There's a roof there; if you squint really hard you can see it. 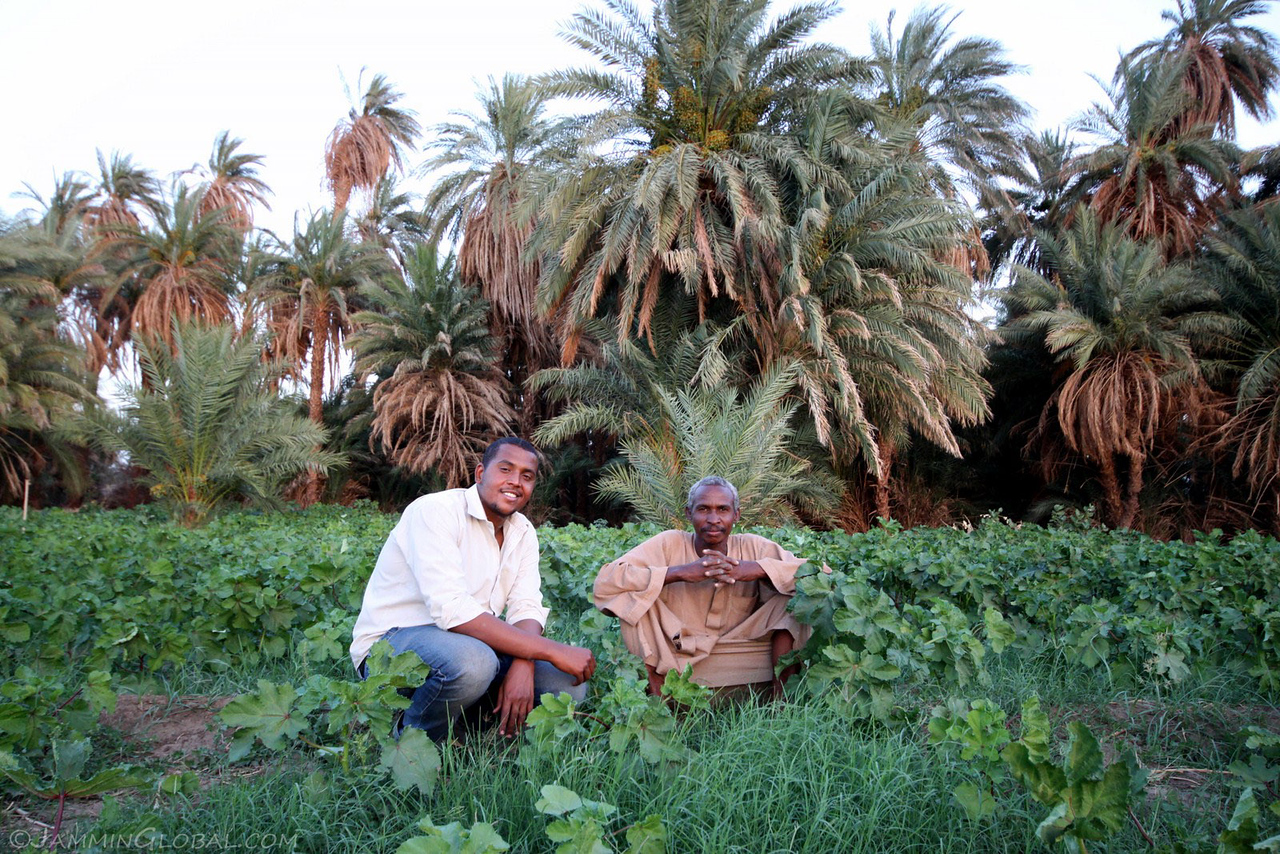 When Saleh and Mohammed got back from their daily rounds of picking up fish from various camps, they took me for a tour of Saleh's farm. He was growing lots of dates, okra, tomatoes, onions, beans, greens and a lot more. Mohammed told me that they're very self-sufficient here and can live without money. But this new business of his, where he buys their fish has injected surplus cash into the village. And what do they spend their money on? Mobile minutes. Everyone is so excited to get a mobile phone and start calling up friends. It's made their social networks much more tighter, which is a blessing in a place like this where travel is hard.

A date palm tree on Saleh's farm on the banks of the Sudanese Nile. 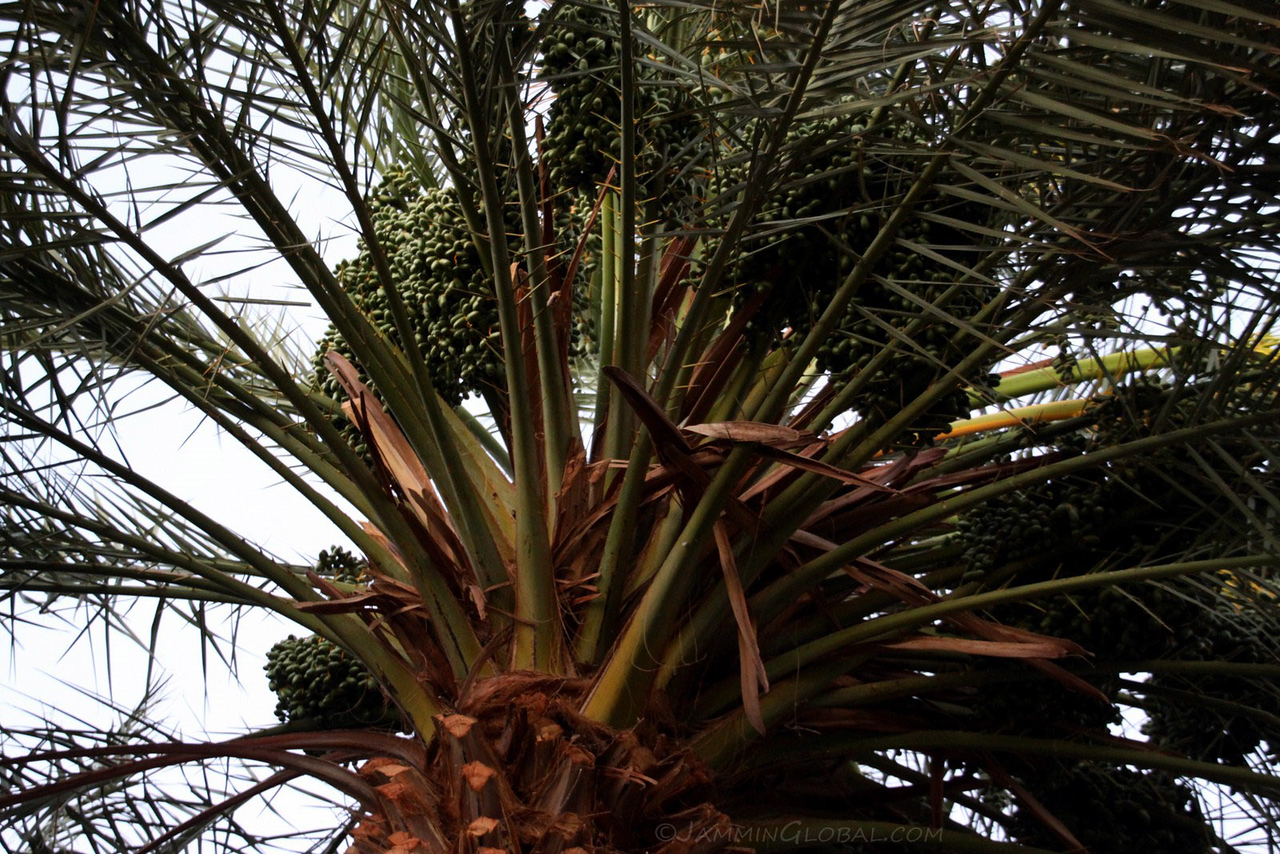 The sun setting across the Nile. Something about the hot, desert air and striking colors at sunset...

We took a little boat ride to enjoy the coolness after the sun went down. The beauty of random connections is that Mohammed studied for a pharmacy degree in the same college that my sister studied medicine, SRMC Porur, in the backwater suburb of my parent's home in Madras, India. It was interesting to hear about his experiences in my home town. He said he really enjoyed it, especially the food, but he did get insulted a few times for being African. He was called "karupu," which could be taken as a derogative term for black people, almost like "nigger." Just goes to show that there're racists everywhere.

A bird dipping into the Nile for a fish snack.

The wonderful afterglow of El Sol and its reflection on the Nile.

Saleh gave me a big bag of dates to take when I left. I really like them for snacking while on the go and it makes up part of my motorcycle diet when combined with nuts, such as walnuts.

The village of Quikkah at twilight.

Saleh firing up the local generator for a few hours of power in the evening, which allowed me to charge up my electronics. Quikkah isn't connected to the electricity grid, yet, but the Chinese are on it.

Sleeping outdoors, under the stars at Saleh's house. The mud construction kept the dwellings relatively cool, but it was still too hot to sleep inside. The nights started out around 33 C (91 F) and got down to say 25 C (77 F) at 3 am and at first light, the mercury shot up again, heading past 50 C (122 F) in the afternoon. Waking up in the morning, my throat would be completely dry and I had to guzzle down a liter of water to start the day off.

The bathroom at Saleh's house. Water was piped in from the Nile and I enjoyed the bucket baths. I took about three baths a day to cool down the body: morning, afternoon and one just before sleep. I've learned to bathe with very little water and can use under 3 L (0.8 gal) for each bath. One jug to wet the skin and soap up and two to rinse off the soap. It helps not having hair. 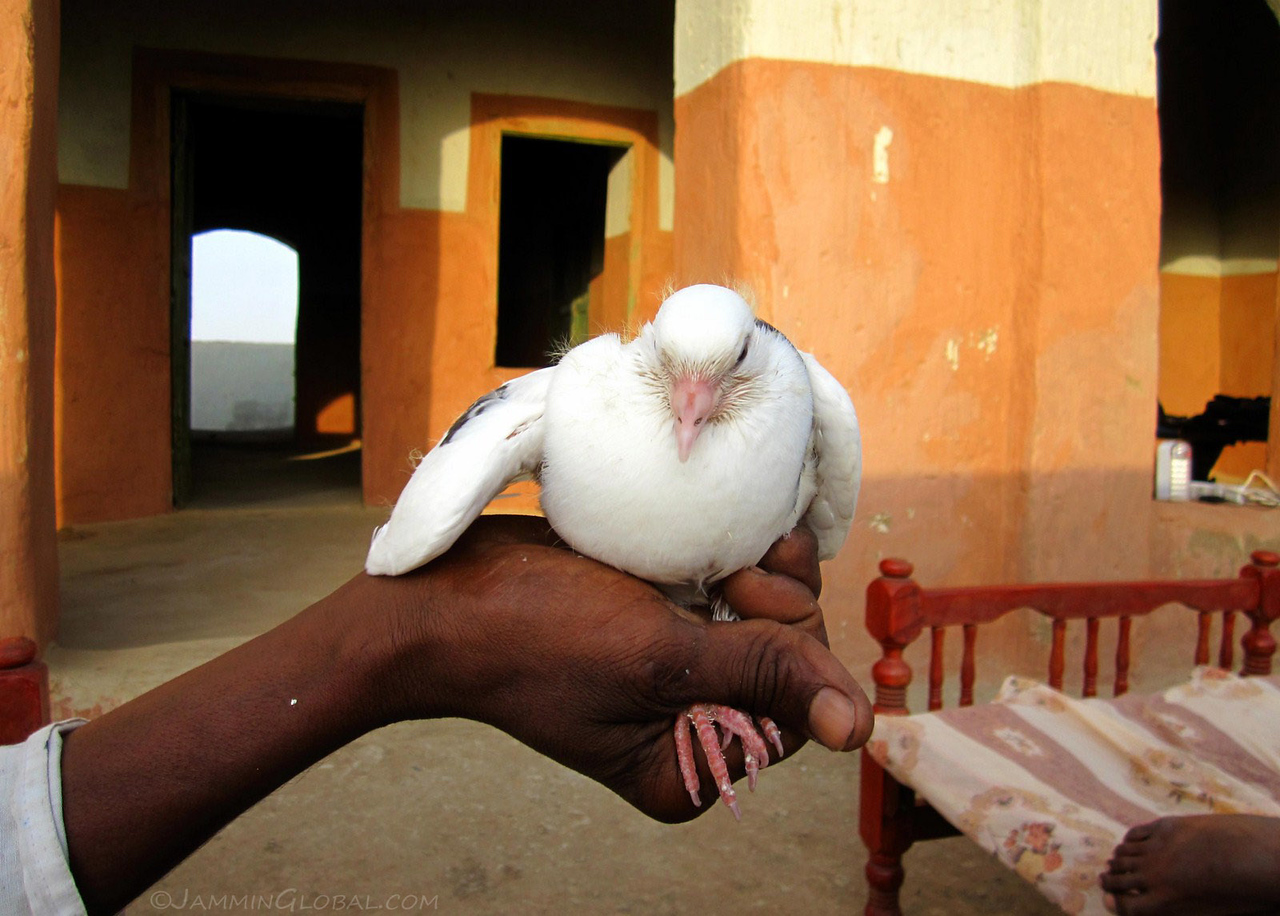 Speaking of pigeons, Saleh woke me up one day to this sight. 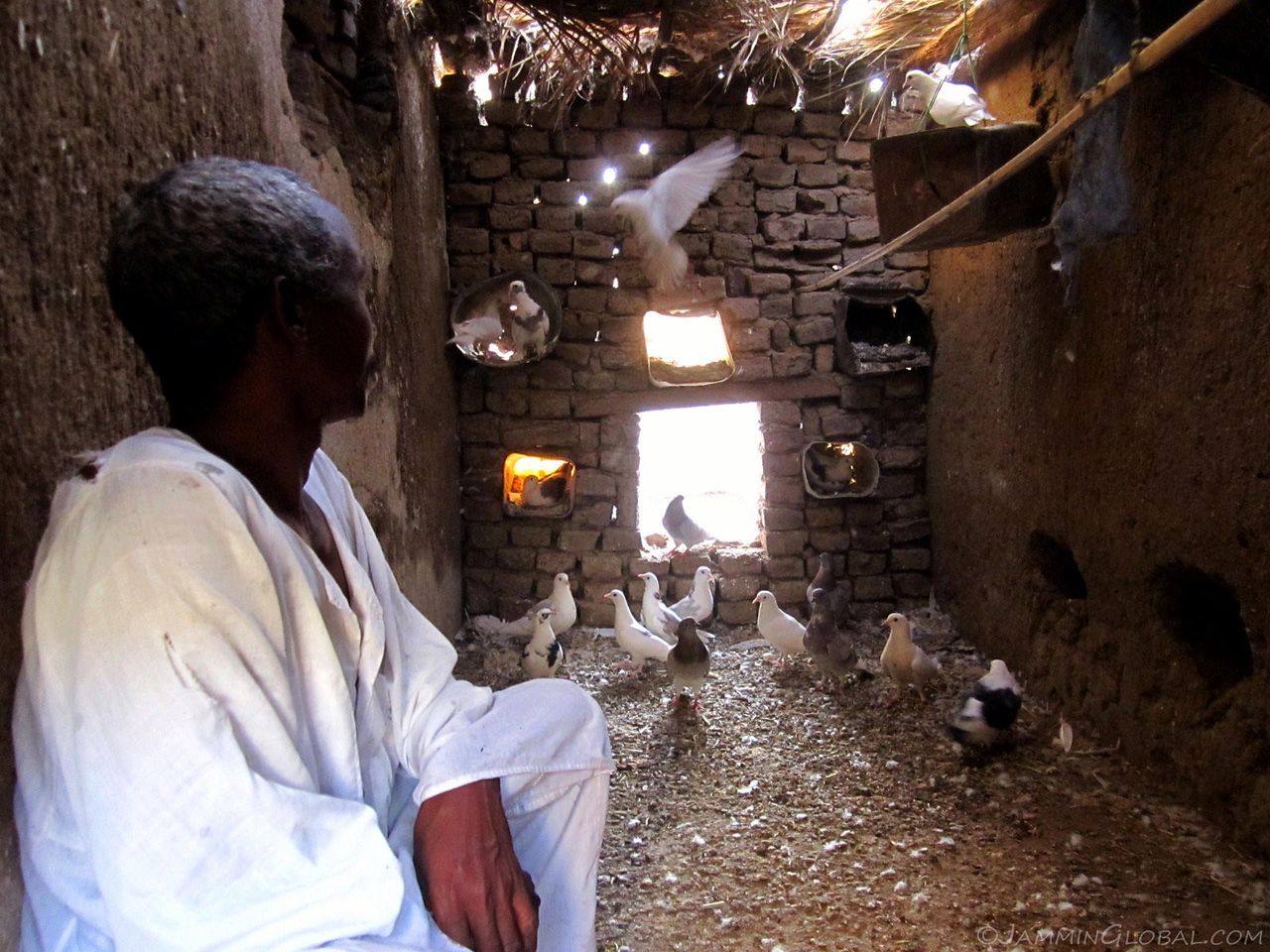 Saleh is his pigeon coop. They were being raised just like chickens and taste much better.

On my last full day at the fishermen's camp, not much was happening and the shisha was brought out.

I asked if I could have a go in the felucca and Fara joined me to make sure I didn't float away down the Nile. 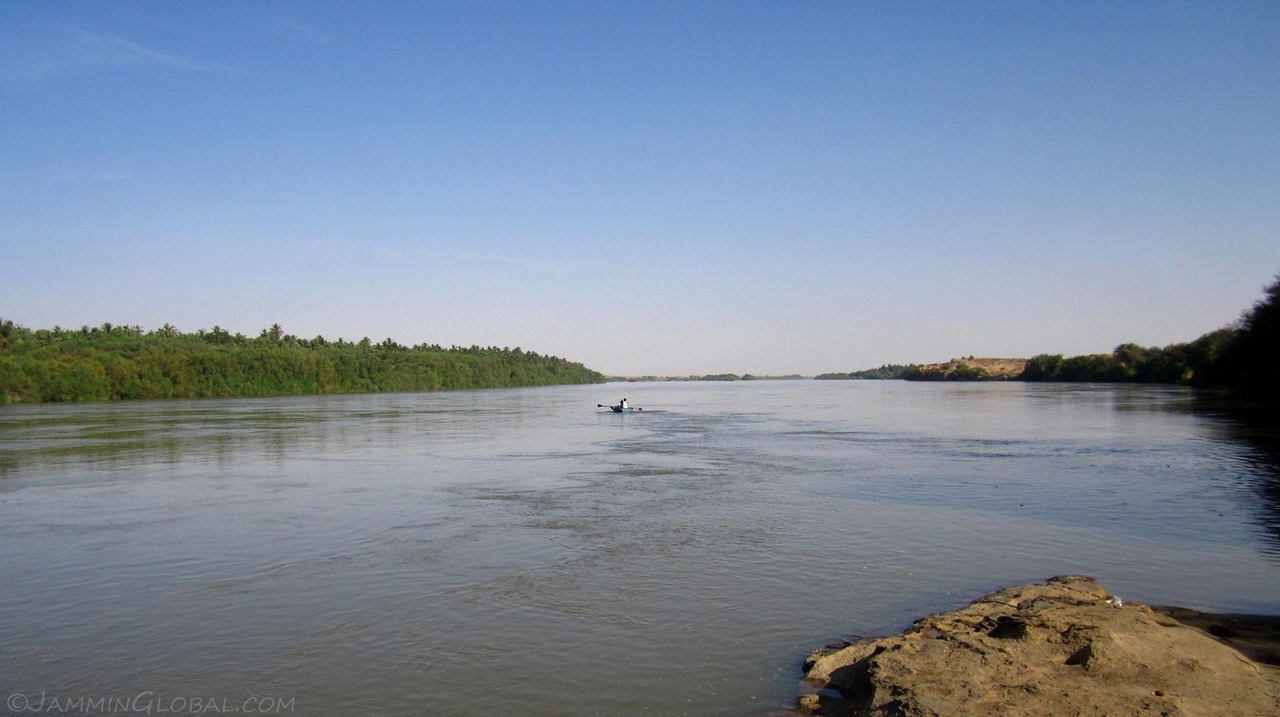 My poor felucca skills showing as I get dragged downstream from the landing. It was quite hard to row the homemade felucca as the oar masts were not aligned and the motion of each hand was not synchronized.

Finally getting into a rhythm and cutting across the Nile. This is hard work and I appreciate what these fishermen do to land a few fish each day and put money on the table.

Mohammed took this excellent shot from the landing and I'm that white dot on the opposite bank.

Coming back to the landing and doing the right thing by rowing upstream near the shore, just as I saw Fara and Bedwa doing on the previous days. 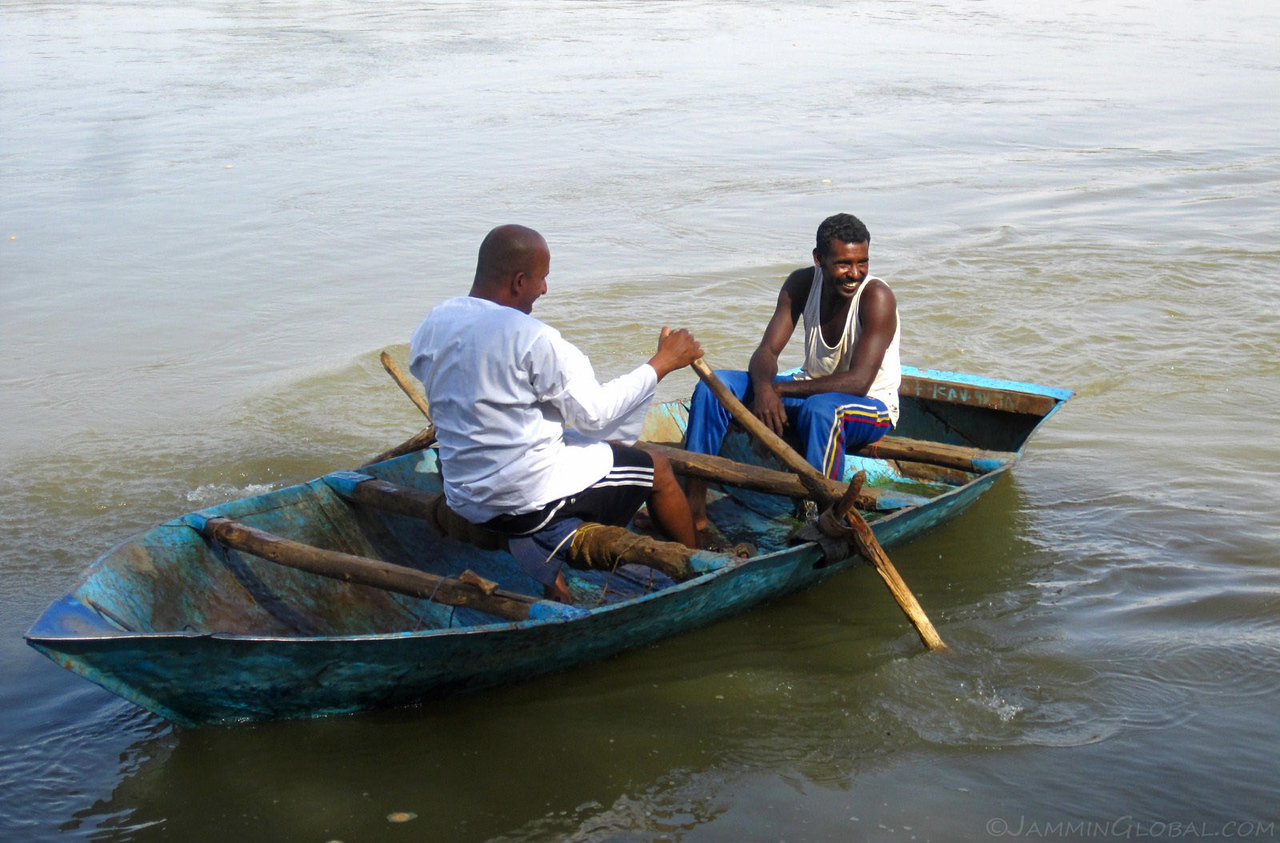 I made it back and Fara laughing after being asked by Saleh if he would consider swapping Bedwa for me. Mohammed joked that if I stayed any longer, I'd need to start fishing to pay my share.

After burning a few calories on the Nile, we went into the nearby town of Abri for a nice lunch. The delicious food consisted of fuul (mashed fava beans) with onions and cilantro, falafel, lentil soup, omelet, cottage cheese, salad greens and bread.

An oil tanker, Abri-style. A healthy-looking donkey, but check out his hind legs... Maybe that's how he relaxes? 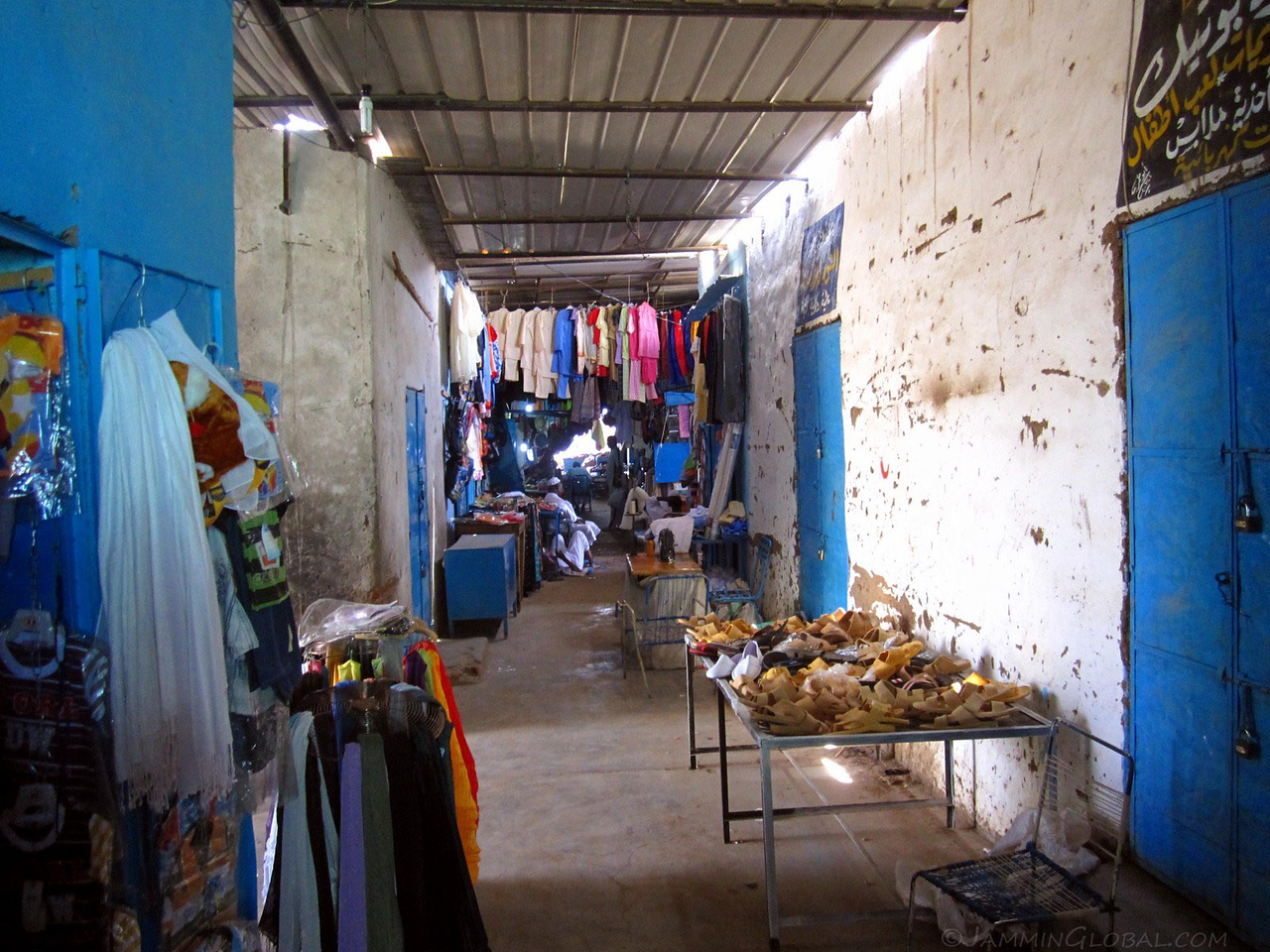 The indoor mall at Abri. It's so hot outside that most shops open to an inner hallway. 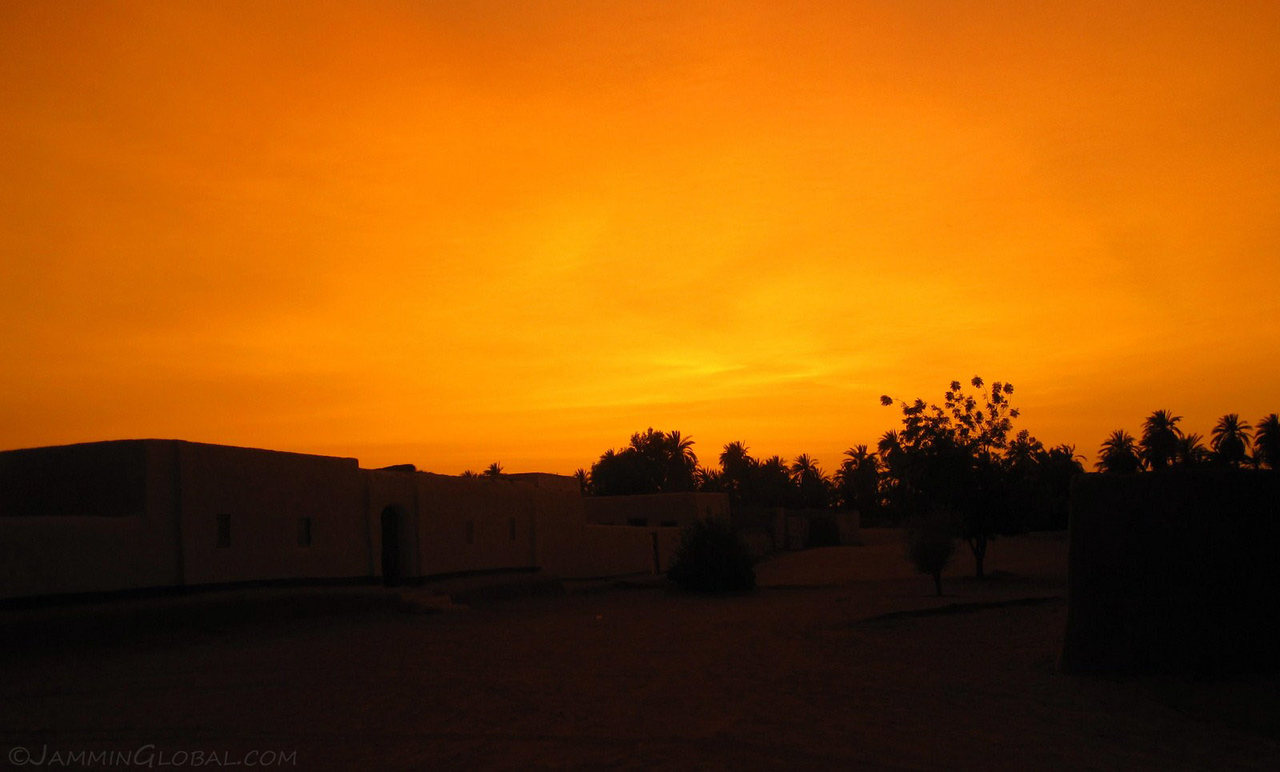 Dramatic sky over Saleh's house in Quikkah on my last night there. What is it with the Sun in the Sahara that produces such wonderful colors for our eyes to feast on? 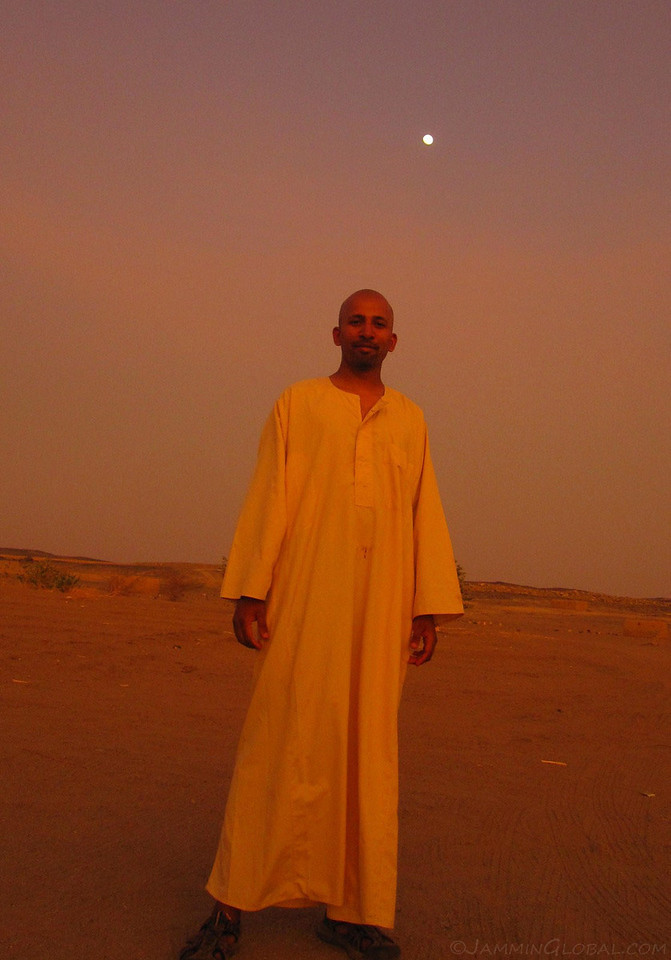 Sporting a gelabiya, the dress of desert men in northern Sudan. It's a free-flowing robe, allowing for air to circulate all over the body. Mohammed took this nice shot with the full moon rising at twilight in the Sahara. After feeling odd for wearing shorts on the first day, Saleh gave me a gelabiya that added comfort and allowed me to blend in much easier.

sanDRina enjoying her break for the past few days under this lone tree of Quikkah. I took this magical light on my last evening as a good omen for getting back on the road the next day. 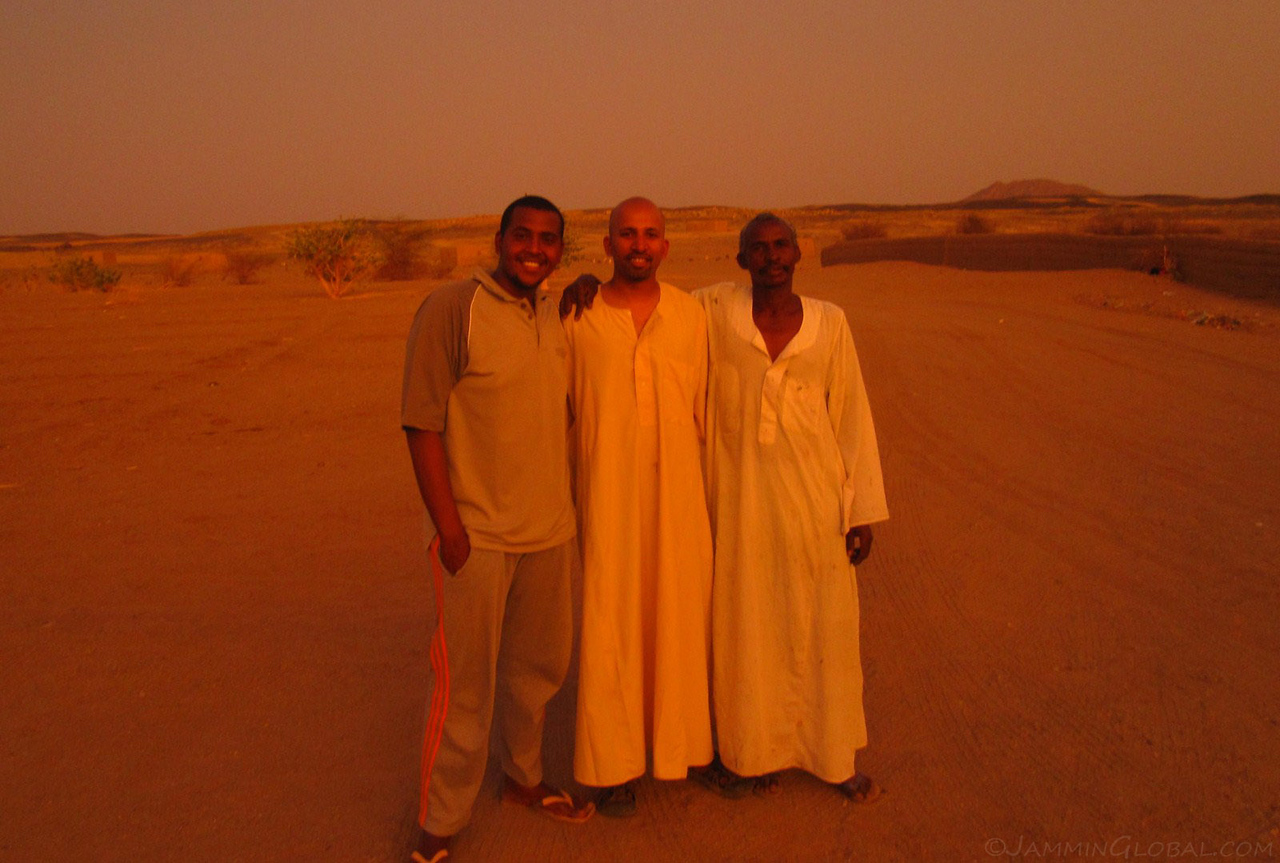 I was thankful to Mohammed and Saleh for inviting me to stay and experience a bit of their lives in Quikkah.

Getting up just before sunrise and enjoying the lovely twilight of Quikkah one last time. After a bath and a cup of tea, I bid farewell and roused sanDRina as the open road was calling._ My stay in Quikkah captured a bit of what eudaimonia means to me. It's a concept that's found at the juncture of what's true, good and beautiful. There are no set definitions for these words but being aware of my experiences allows me to recognize when a eudaimonic moment is happening.

I left Quikkah with a sense of belonging to the human race. Connecting with random strangers and feeling like family after a few days is just what is prescribed for reaffirming faith in our species. There are good people out there, with good intentions and I hope by sharing this journey, I can spread the eudaimonia that I feel.

Next: Sudan, Part 4: Thru Dongola, Karima and The Pyramids at Begrawiya

Previous: Sudan, Part 2: An Encounter with Fishermen of the Nile