Egypt, Part 14: Aswan, End of the Road in Egypt

After a solid month in Egypt, my time here was coming to an end as I journeyed the last leg southwards to Aswan. Filled with Egyptian cultural visits, I was now focused on a tricky bit of traveling, namely the ferry ride from Aswan to Wadi Halfa in Sudan. My time in Aswan was spent on keeping in step with the bureaucratic dance that Egypt dictates you have to follow when you leave the country with your vehicle and also, getting things sorted for the boat journey. I connected with other overland travelers whom I would be sharing this part of the journey with.

Heading south from Luxor along an irrigation canal. The roads were in good condition, leading to high speed driving by everyone, mini buses to jalops, except of course, the numerous donkey carts.

A lush field of alfalfa, the food for donkeys and horses, thriving with the waters from the Nile, under the hot sun of Egypt.

Riding next to the Nile, on the way to Aswan. I enjoyed the blue-ness of the river here, compared to the more polluted sections downstream after people have dumped on their life source.

What's better than a window seat? Hanging on to the back with fresh wind in your face.

Taking a break under a small spot of shade. The heat was becoming intense the closer I got to Aswan. The temps for riding in most of Egypt (bar the desert) are actually quite comfortable, but I was told by travelers I met going north that the real heat starts from Aswan and south into Sudan. I left Luxor with 14 L (3.7 gal) of water and drank about half that over the 300 kms (186 mi) to Aswan.

A horse and donkey cart, as I neared Aswan. I wonder if there's a power struggle... 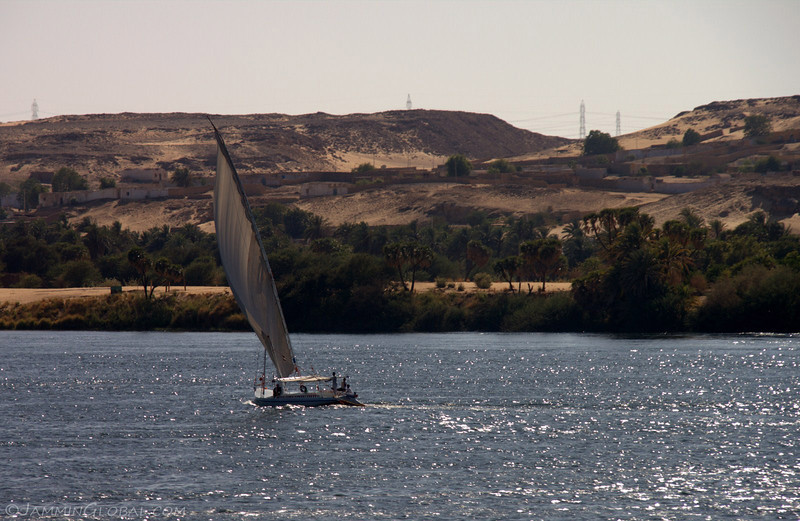 Seeing a felucca on the Nile as I got into Aswan. The high-power electricity lines in the background also give away the location, as Aswan is important to Egypt in that the Nile is dammed here and hydroelectricity generated at the Aswan High Dam is highly valuable to the country.

Arriving at a non-descript apartment block that houses the Aswan Traffic Court. To successfully leave Egypt, I have to get a small piece of paper from the traffic court saying that I have no outstanding traffic violations. Then I take this paper to the Traffic Police who give me another piece of paper that I then submit to customs at the port. The traffic court was closing at 2 pm and I arrived at 1:55. A broker (hustler) downstairs said he could help me out if we hurried. We ran up the flight of stairs (in heavy motorcycle gear and boots) with passport, drivers license and photocopies in hand. The official was on his way out, 'Oh, I'm sorry, you're too late, come again on Monday.' But sir, the boat is leaving on Monday. 'Oh, you're from India? Amitabh Bachchan is Great! I'll help you out, one second.' And then after waiting around for 30 minutes, I got my little piece of paper. No cost for the official, but just LE 15 ($3) for the broker. 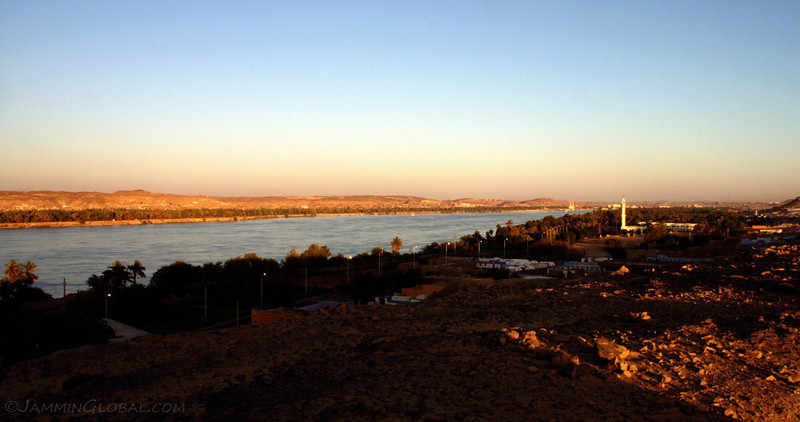 A view from the west bank of the Nile with the city of Aswan further upstream. I was trying to find a place to camp for the night. 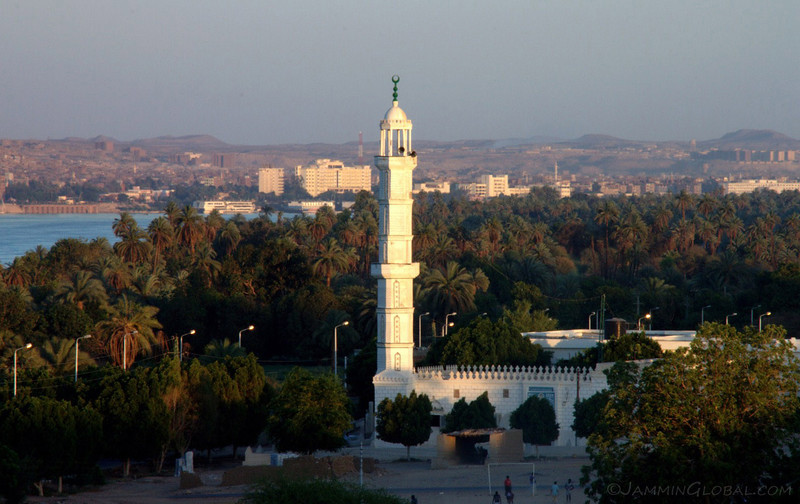 A white mosque surrounded by the greenery of the Nile.

A felucca and a river boat on the Nile. 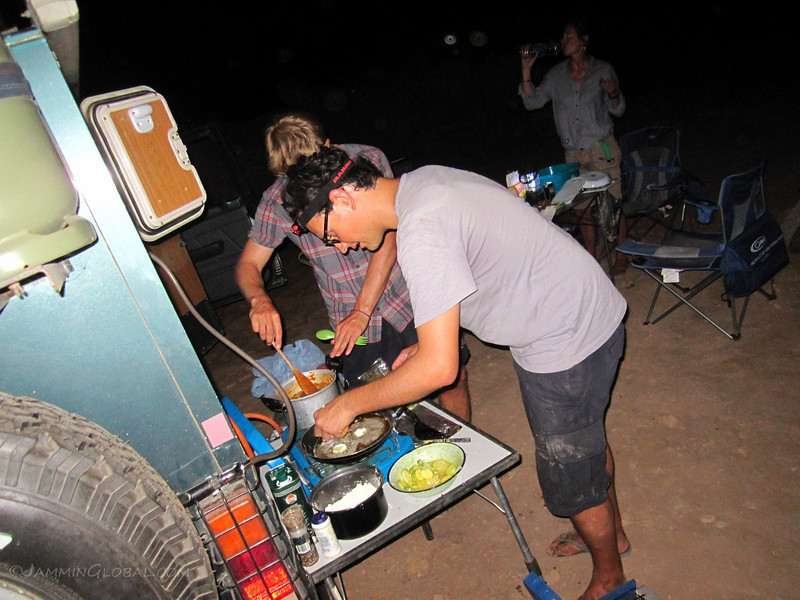 I knew there would be other overland travelers taking the same boat as me, as it only travels once a week and I found them in the afternoon. This is Benjamin, from Switzerland, and he's traveling with Edward, from The Netherlands, in their green Toyota Hilux camper. Next to him are Guy and Louise, Brits, traveling down in a Land Rover Defender. Guy saw me riding around town in the afternoon and invited me to join them in their desert camping spot. Ben and Guy are quite the cooks and they were preparing an excellent meal of curry and rice and breaded aubergines (brinjal) and zucchini. Ahh, the luxuries of traveling in an automobile.

Getting ready the next morning for the final day in Egypt. Ed found this secluded camping spot, a dead-end up a sandy track with great views of the Nile and the stars at night. After a hearty breakfast, we set off into town, now as an overland convoy. 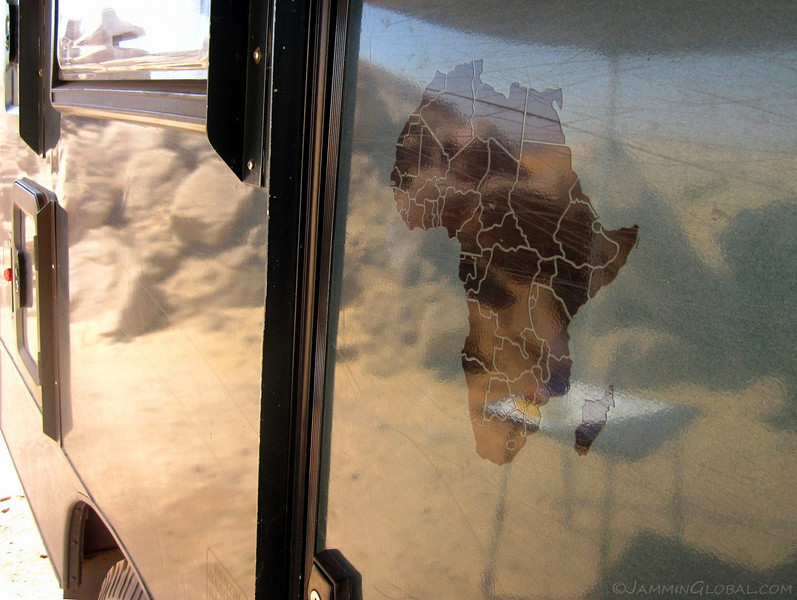 Ed and Ben were on a 3 month sprint from Cairo to Cape Town and were super jealous of my extended timeline. They could only manage a 3 month leave-of-absence from their management consulting jobs.

Arriving at the Traffic Police building to hand in our temporary Egyptian number plates, get the second piece of paper and pickup the local official who would take us to the port. The gentleman in the middle had traveled up from his home in South Africa with his wife in their red Toyota Hilux in just 12 weeks. They wanted to visit family in Europe, but alas, the ferry to Venice was no longer operational and there was no other safe overland route to Europe from Egypt (Libya and Syria were no-gos), so they turned around and were going to head back to South Africa and see the things they missed on the way north.

Arriving at the Port of Aswan, 20 kms south of the city.

There was lots of standing around in the intense heat and we found respite in the retreating noon shadow at the port entrance. Carnets (customs document) in hand. 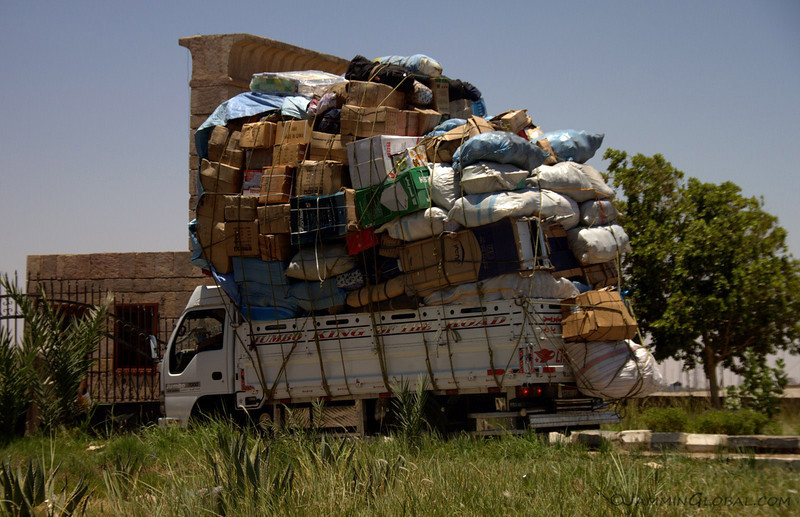 What do you mean I'm overloaded? A truck arriving at the Port of Aswan with goods procured in Egypt, where everything is cheaper than Sudan, to be sent on the sole transportation link between these two brothers of the desert. There is a road coming to fruition on the coast, but it’s not open to personal traffic, yet. 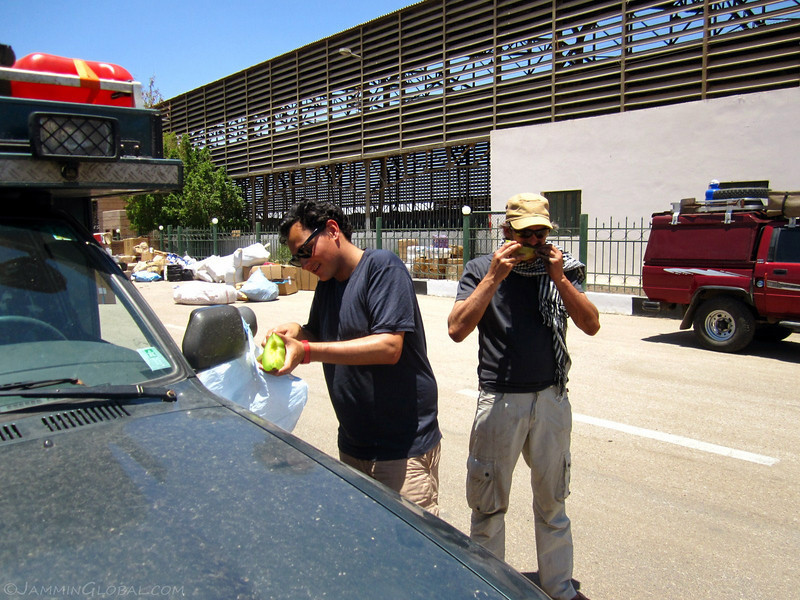 We made it inside the port (LE 10 entrance) and then, more waiting around. I enjoyed traveling with Ben, because besides diving into deep philosophical discussions, he always had food at hand. He's cutting up a juicy honeydew melon that was perfect for hydrating in this dry heat. Ed and Ben met while working on a project in South Africa and hatched the plan for their journey there. 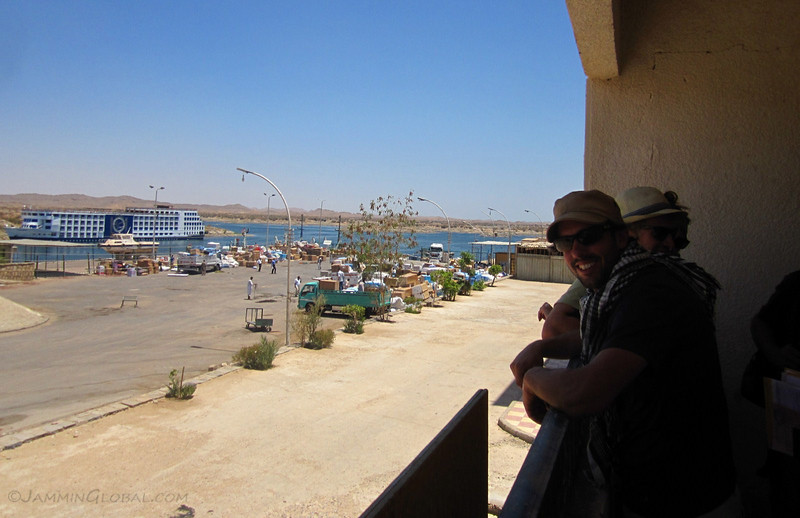 All smiles after having bought the passage for our vehicles with a view of the pier and Lake Nasser that we would be sailing on to Sudan. The barge ride for a motorcycle cost LE 250 ($45) and LE 2012 ($366) for automobiles, an advantage of traveling on two wheels. I don't get to carry a full stove and kitchen, but hey, it's cheaper. From there, we walked across to the customs building to have our carnets stamped out of Egypt and have a customary tea with the customs official. The carnet de passage is a customs passport for a vehicle that facilitates temporary importation into most every country in the world (except China and a few others).

We then finally entered the fenced-off pier and had to wait around for the barge to be positioned properly before vehicles could be driven on board. We walked down the huge pier that sloped down to the water level and got our first look at the boat that would take us across Lake Nasser. There are 3 modes of travel on this boat. Most expensive was First Class with private cabins and cold A/C, then came Second Class, which was also A/C, but no privacy and best of all was Third Class, sleeping on the deck of the boat. The word has been passed on by past travelers that Third Class is the way to go, but you have to secure a spot under one of the lifeboats to escape the sun.

We got moving with our vehicles, getting closer to the barge.

Men pulling the barge so that it's ramp would reach the shore. The ferry boat is only for passengers and vehicles travel on a separate barge. All overland travelers experience a sense of separation at this point, because we've bonded with our vehicles by now, getting used to our new mobile homes and now, we have to part with them and hope they will arrive safely at the other end of the long lake in a new country.

Guy and Lu's butch-looking Land Rover. Overland travelers agree that the Defender is the best-looking overlanding vehicle, feeling at home in Africa, but it's also agreed that they require a lot more maintenance than trusty Toyotas, like the Land Cruiser or Ed and Ben's Hilux. Spares for the Toyotas are available almost everywhere on the planet and most-any mechanic knows how to work on them. So, in deciding on an overland vehicle, you can be a romantic and choose the Defender or be the pragmatist and choose the Land Cruiser or Hilux.

Once the barge was in place, the vehicles were driven on and I squeezed sanDRina between the Hilux and the Defender. I had my panniers aligned with their tires, so that if the barge rocked, she would be held in place. There were no tie-downs provided or any places to attach them (I carry a set of tie-downs), but with just the kick-stand down and resting between the tires, I figured sanDRina was in a good place.

With our personal transportation gone, everyone piled into Kamal's taxi for the ride back into Aswan. He drove like a typically mad Egyptian and with all of us being drivers/riders, we make the worst back seat drivers. Seat belts? meh. 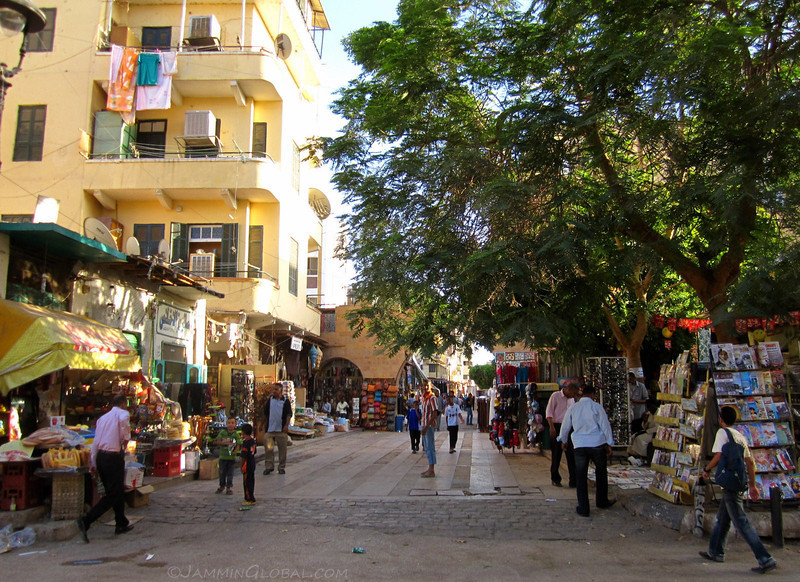 Now, with everything set for the ferry journey tomorrow, we could enjoy the city of Aswan. We wandered around its souk (market), looking for a place for lunch.

A colorful array of spices and minerals. The cobalt blue powder is used for washing white clothes. 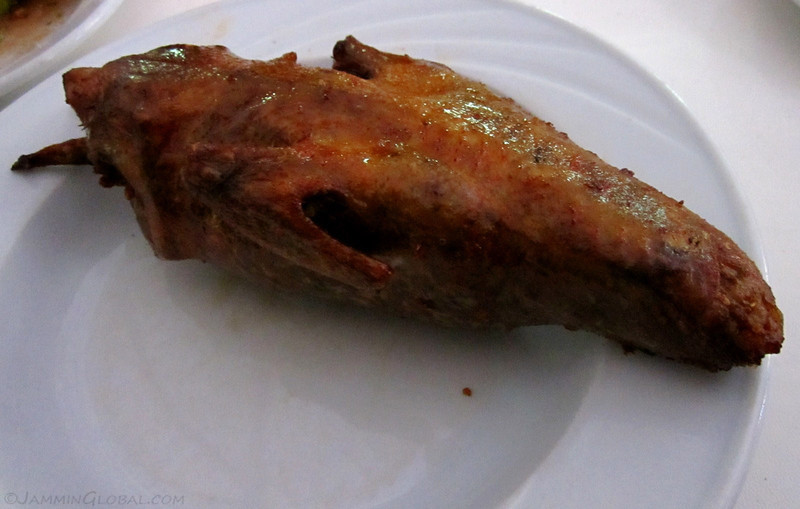 Lunch of a stuffed pigeon. Tasted like chicken and was stuffed with rice and veggies. 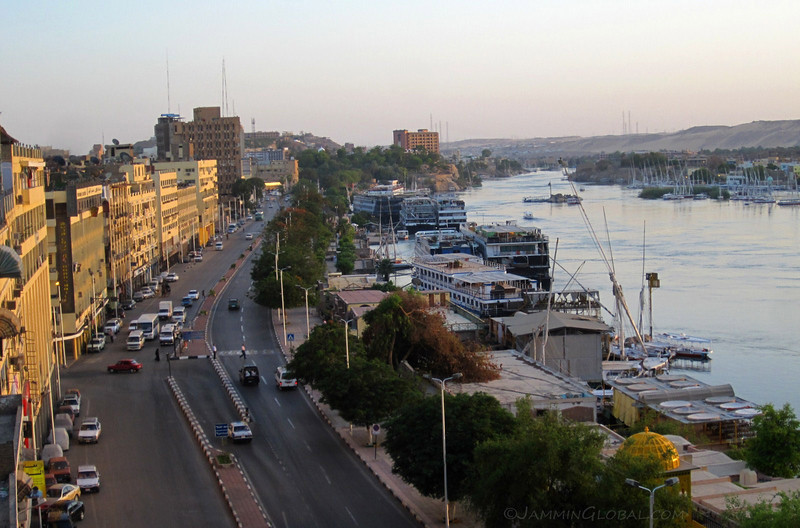 A view of the corniche in Aswan along the River Nile from the rooftop of Hathor Hotel. Not having our mobile homes with us, we had to resort to a hotel. 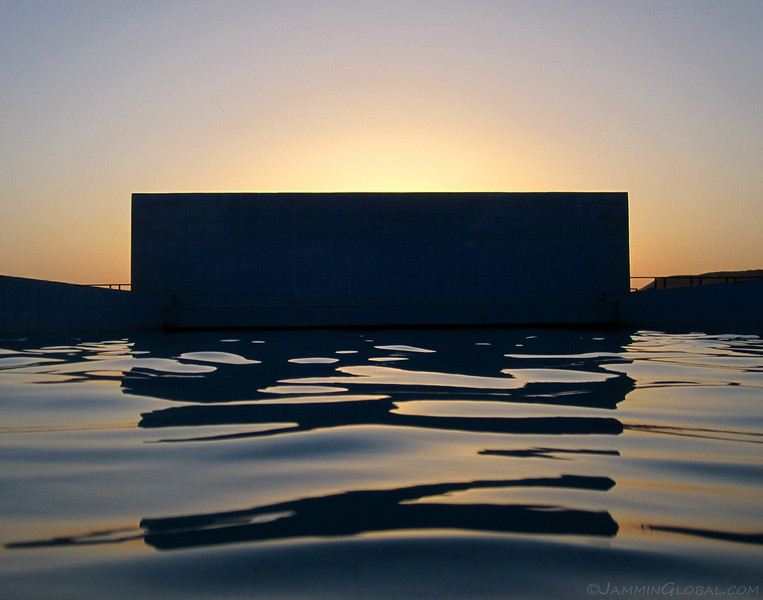 The rooftop pool at Hathor Hotel with a setting sun behind the wall. The hot day spent outside in the sun made us splurge for this last night in Egypt, all of LE 80 ($15).

The sun tucking away behind the hills, casting its beautiful glow in the sky and on to the waters of the Nile.
_
I slept peacefully and thought back to all the wonderful experiences I had had in my journey south from Alexandria, thru Cairo, Bahariya, the White Desert, Kharga, Luxor and finally into Aswan. Egypt has a lot to offer for visitors to see and experience, ranging from ancient monuments to mind-blowing wind sculptures in the desert. I'm also happy I got to make some good connections with Egyptians all over the country, ranging from professionals in the city to Bedouins in the desert.

All though I had been on the African continent for a month by now, Egypt felt very much like the Middle-East and I was looking forward to entering Sudan. But first, an epic ferry ride down Lake Nasser...

Next: Ferry Ride on Lake Nasser from Aswan to Wadi Halfa