Egypt, Part 10: Camping out in the White Desert

An area of surrealistic limestone sculptures in the Sahara that's safe to camp at night. I'm there.

On par with the remote magnificence of Bolivia's Salar de Uyuni salt flats, Egypt's White Desert was a destination I was highly looking forward to. Especially to experience once again camping out in the vast openness with not a soul around and surrounded by a beauty that Nature has carved up for us to enjoy. The White Desert is so called due to the numerous limestone-chalk pillars that have been sculpted by erosion into natural works of art.

I spent a wonderful night in the desert, camping under the stars, among the great formations in the White Desert. 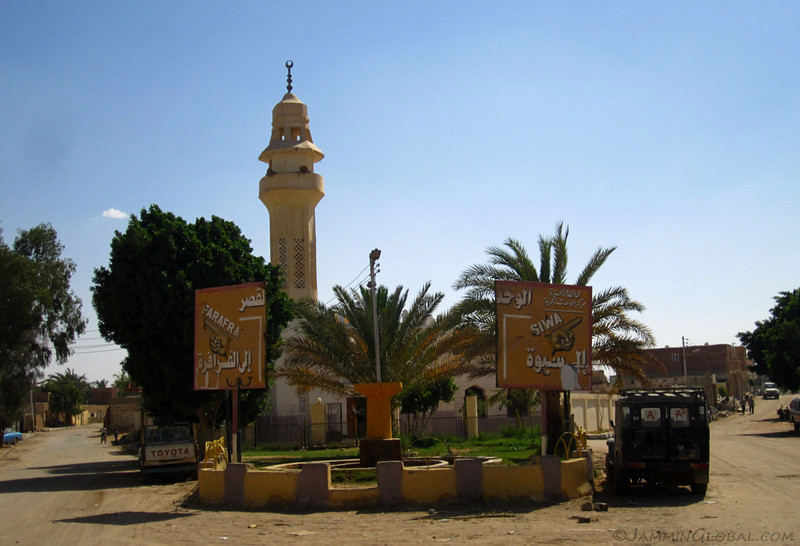 A fork in the road as I left the oasis of Bahariya. Going right would take me west to the oasis of Siwa, near the Libyan border and going left would continue my journey south towards the oasis of Farafra.

The southern reaches of the Black Desert just outside Bahariya. My destination for the night, the White Desert, lay about 140 kms (87 mi) south of Bahariya. I left in the mid-afternoon so that I would arrive there before sunset and was pleased at how much cooler it felt while I was moving than I expected.

Taking a water break and happy to have a healthy motorcycle as I headed across the desert.

Volcanic rock formations in the Western Desert, adding texture to the sands of the Sahara.

Knowing that I was riding through the Great Sahara Desert, which previously invoked images of bleakness and desolation, I was surprised at the amount of color on display.

Looking back at a slow climb up this ridge, highlighting the range of geologic relief in the Sahara. While the road was entirely paved, the blowing sands managed to reclaim some parts of it, covering my path in meters of soft sand at times that required cautious driving with a heavily-laden motorcycle in windy conditions.

With our shadows growing longer, sanDRina and I were delighted to note the change from black tops to white tops of the formations in the distance.

I had arrived at the White Desert National Park, an area of Egypt's Western Desert covered in bright chalk pillars, carved into spectacular sculptures by the wind and rain. 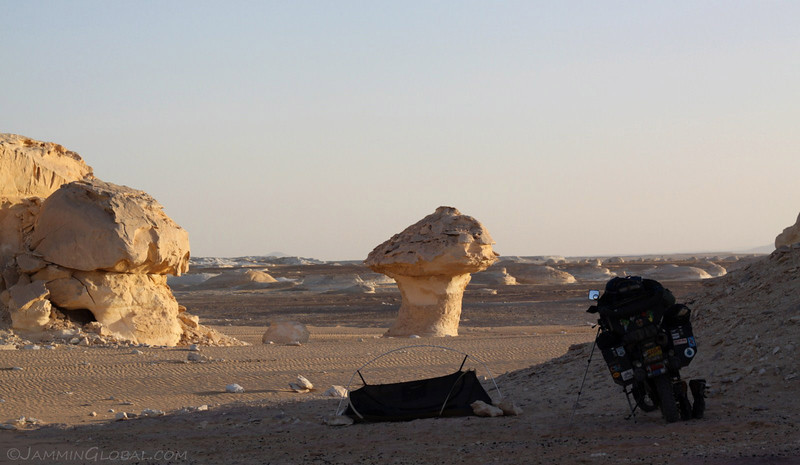 A little ways into the park, I found a nice spot to camp for the night. The winds were coming from the west, so I parked up behind this mound but still had to secure my tent down with some large rocks as I couldn't use my tent pegs on the hard rock surface.

With shelter setup for the night, I walked around in the open-air gallery that the sand-borne winds of the Sahara have produced for our minds to enjoy.

The shapes in the chalk pillars were mesmerizing and I was smiling from ear to ear knowing that if Nature is left to its ways, it has the ability to stun us. In our current paradigm, where we believe humans extol great control over Nature, it is humbling to be among giant pieces of rock shaped by invisible forces, slowly at work over millennia.

A mushroom-shaped chalk pillar in the White Desert, with sanDRina and my tent in the background. The direction of the prevailing wind coming from the left (west) can be discerned from the shape of the mushroom head. To me it resembles the shape of Earth's magnetic field in space, with the side facing the Sun (left) having compressed fields from the solar wind and the side away from the Sun (right) having expanded fields in Earth's wake. There is a beauty to appreciate in recognizing the connection between forces that are visible on the human scale and those on much larger scales as it all lies on a spectrum.

A face in the rock brought to life by the shadows of the setting sun. The details of the deep sculpting of Aeolian forces; sand-borne wind loosening one grain at a time to result today in a shape that human minds automatically recognize as familiar.

Wonderful sculptures of chalk in every direction in the White Desert. 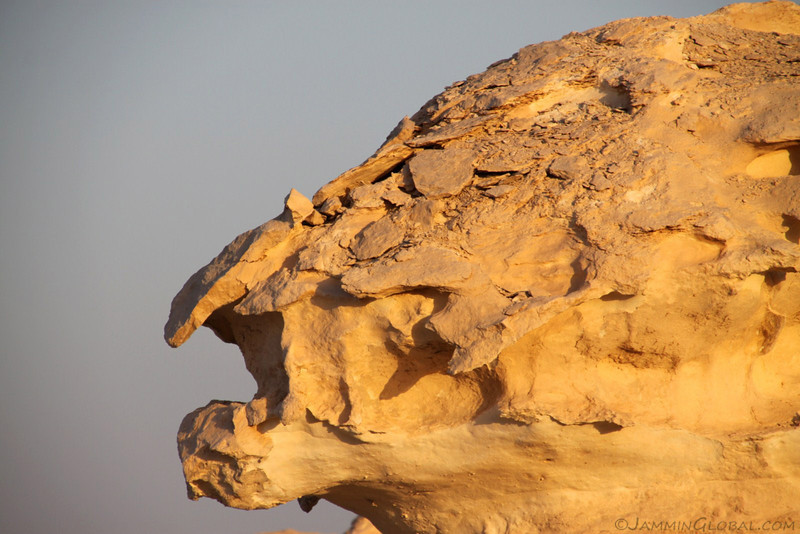 Over-hanging structures in the chalk pillars resembling a ferocious alien creature with its jaws open. 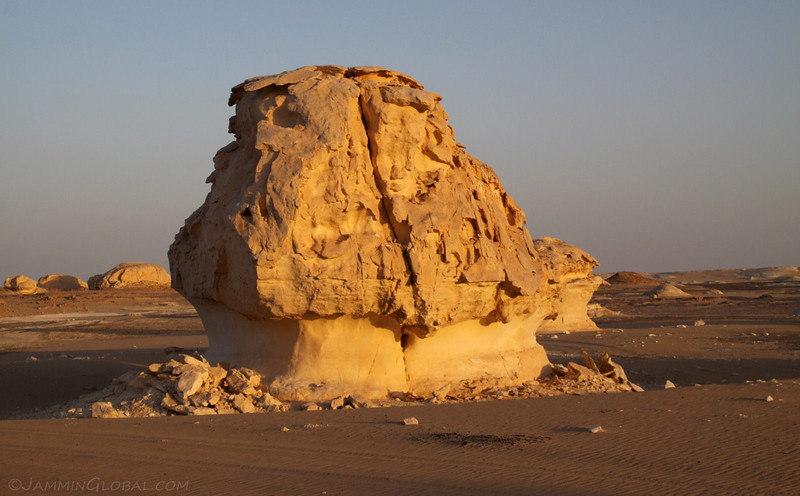 A clean fracture down the center of this large chalk pillar glowing in the fading sunlight. Chalk is a type of limestone that is formed by the shells of marine organisms. These organisms, such as mollusks, plankton and sponges, remove carbon dioxide from the ocean and use it to build their external body structures (like shells), turning it into calcium carbonate. Then when these organisms die, they drift down to the sea floor and slowly, over eons, as the carbonate builds up, it gets pushed deeper into the Earth's crust where it is compressed into chalk. This is a process of natural carbon sequestration (removing CO2 from the atmosphere and storing it). 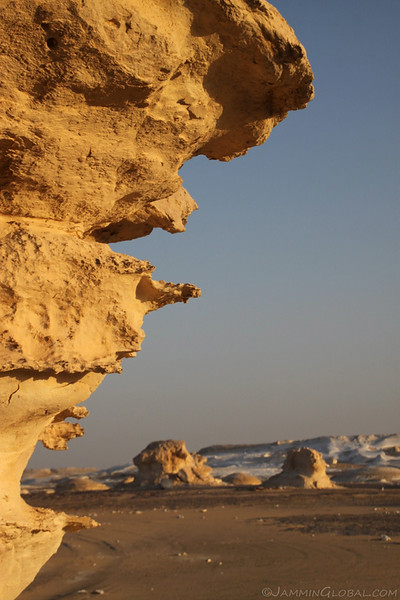 An interesting profile of a chalk pillar, sculpted by erosive forces. The presence of chalk implies that all this area was once under water, a strange idea considering it's currently a hot desert. 60 million years ago, after the dinosaurs vanished, this area of the African continent was under a shallow sea. It was closer to the tropics than it is today and that's where marine organisms with calcium carbonate shells thrive. As the African plate collided with the European plate, it lifted this part of the continent out of the sea and exposed this formation of chalk to the weathering forces of wind and rain resulting in the sculptures that we see today.

A timeless instance of chalk formations and ripples in the sand. I wonder what ancient man must have thought when he first came upon these shapes in the desert. 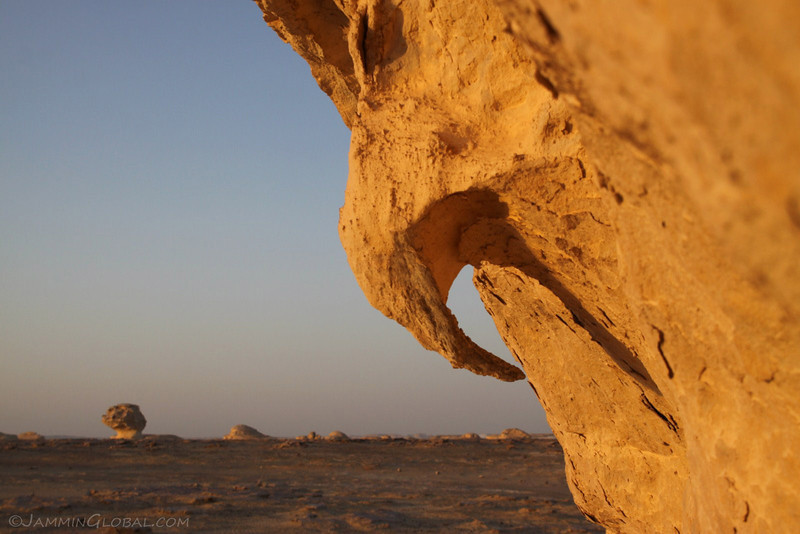 A hook in the rock, carved by the sculptor known as Wind.

Shadows in the desert growing long as the sun tucked in below the horizon. I was only at the edge of the White Desert and looked out at the vast sea of chalk sculptures deeper inside. Others who have gone in with tour guides have told me about a whale fossil and numerous stunning landscapes. However, I was content with my location and its grand views.

The White Desert is actually white in many parts, looking like mounds of salt or ice. Perhaps these are areas of chalk that haven't been imbedded with sand grains by the fierce winds.

A Sphinx-looking sculpture appearing at the end of this chalk pillar in the White Desert. This supports the theory behind the mystery of the origins of the Sphinx that says it was either a natural chalk sculpture itself, finished off by humans or at least its human sculptors took inspiration from the shapes in the desert.

Another Sphinx-like figure appearing in a chalk pillar.

The setting sun in the White Desert, framed by a sculpted cut in a chalk pillar.

As the sun fell before the horizon, it cast an aural glow back into the sky above the chalk formations of the White Desert. 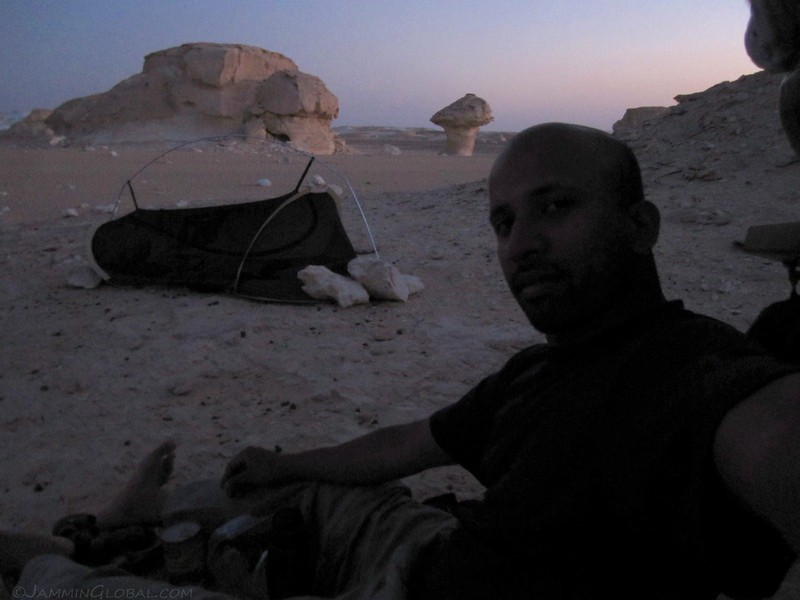 With daylight fading, I allowed my eyes to adjust to twilight and set about eating dinner. As I left Bahariya, Hamada gave me some of his dehydrated Bedouin bread that I had with a can of fuul medammes (fava beans). I leaned against sanDRina and looked up as the stars took their place in the sky.

With the stars fully out in the grand night sky of the desert, I captured this long exposure shot of my view through my mesh tent. It got chilly but I was comfortable enough in my light summer sleeping bag and silk liner. The light on the horizon is from the nearby oasis of Farafra, about 45 km (28 mi) away.

The view from inside my mesh tent the next morning as I awoke with first light at 5 am.

The first thing I always do in the morning is check to see how sanDRina is doing. The winds in the night caused her bike cover to ride up, but luckily it didn't blow away.

Welcoming back Ra, El Sol, in the east, after his passage through the underworld that he entered in the west.

Desert Fox tracks around my tent and bike. Last night, while I was having dinner, a desert fox approached me, drawn in by the smell of food in this desolate area. They're not dangerous but I shooed her away as I don't agree with feeding wild animals as it breeds a sense of dependency. She came back again after I got in my tent and I heard scratching noises around the bike but no harm done. 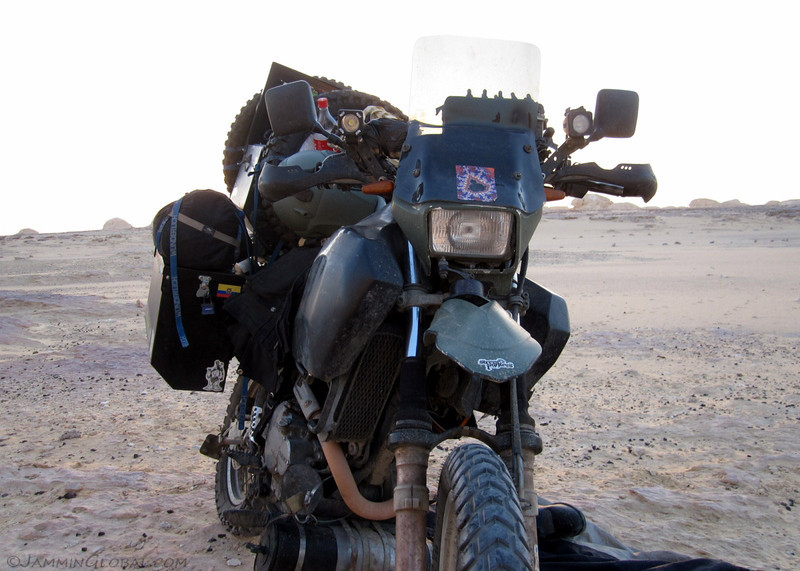 The thing that I continue to love about this bike, even after all the time we've been together, is her chirpy look. sanDRina has that, 'hey, get up, let's go!' look. Hang on there you composition of nuts and bolts, your rider needs some breakfast and time to pack up house before hitting the road.

Enjoying breakfast with a view, soaking in the first rays of light in the White Desert.

Finishing off the Bedouin bread and my can of fuul medammes from dinner last night for breakfast. I usually prepare oatmeal in the morning when camping but appreciated the chance of not having to setup my stove, boil water, cook and clean, which usually adds another 30 minutes to my morning camping routine. I was looking to get moving before the Sun got too hot so that I could enjoy the desert riding. 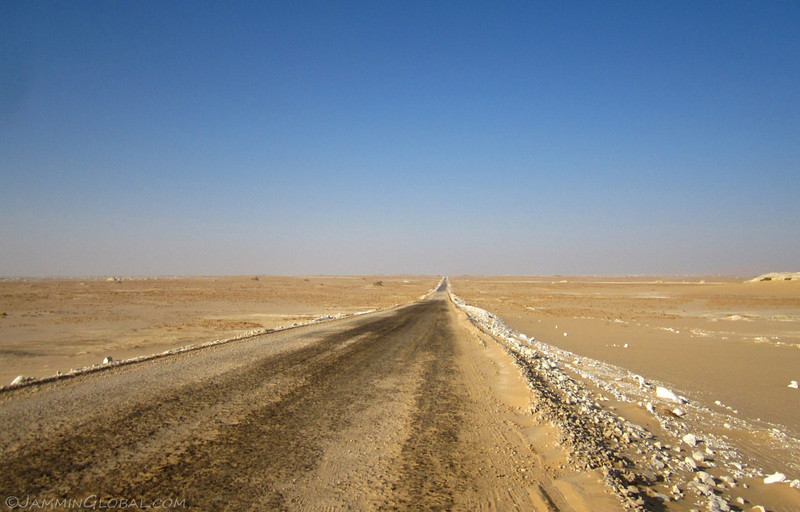 Rolling out of the White Desert by 7 am and continuing south to the oasis of Farafra and Dhakla.
_
I thoroughly enjoyed my night camping out in the White Desert. The chalk sculptures are stunning and left me wanting to come back again to go deeper inside into this mausoleum that millions of ancient marine creatures left for us to enjoy today. I still had a lot more of the Sahara to cross before reaching Ethiopia and I wondered what surprises the desert would have for me ahead.

Next: Egypt, Part 11: The Oasis of Kharga and Roman Ruins