During my stay in Cairo, I had a wonderful chance encounter with a traveler I met in Argentina, Ava, and her CouchSurfing host, Bisso, who has a passion for desert rallies. He was heading out into the Qattaniya Dunes outside the city for the last part in a rally driving course on how to tackle dunes and he invited Ava and me along. It was a fun day playing out in the desert with 4x4s.

Heading out into the Sahara and Egypt's Western Desert to the Qattaniya dunes, about 80 kms (50 mi) from Cairo, for a day of dune-bashing - climbing up and over steep sand dunes.

Bisso, standing next to his green Jeep Cherokee and Sharif with the Grand Cherokee. They were out here today for the last part of their driver training in desert rallying. 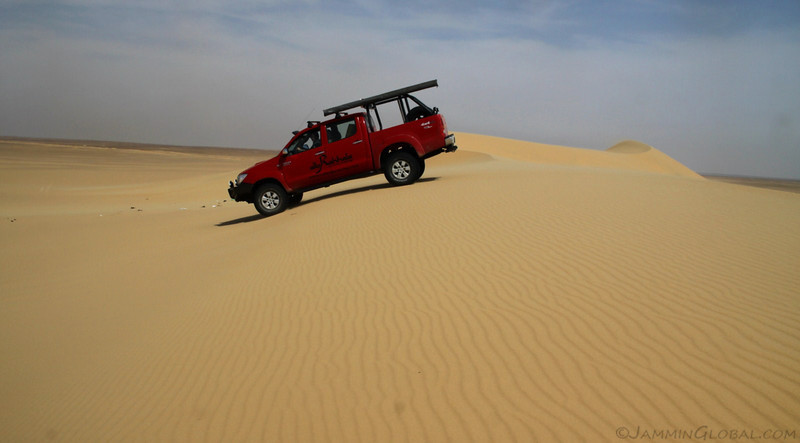 The instructor for the dune-bashing course in the much-coveted Toyota Hilux D-4D pickup truck and the wavy texture of the dunes.

A group shot of all the vehicles out for the day while their owners attended the drivers meeting. Besides the Hilux and two Jeeps, there were two LandCruisers and an oddball Daihatsu Terios.

The Hilux took off from the flats up to the crest of the dunes.

A LandCruiser followed under full power to crest the dune. 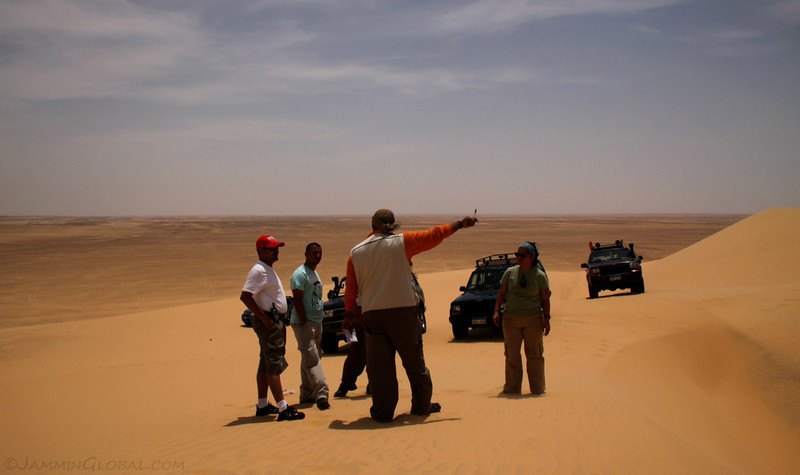 After a few practice runs over smaller crests, the instructor found a set of dunes that the drivers would be tested on. 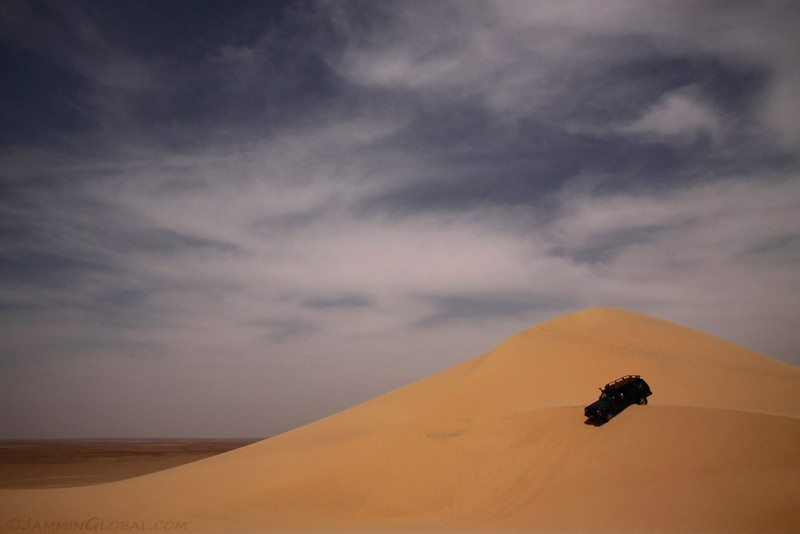 Bisso hanging out on the crest of a dune, picking his line through the course ahead. The tricky thing about crossing a huge sandy dune is that you need full power to climb the dune but then you have to throttle back as you reach the crest without losing too much momentum that you get stuck. If you don't throttle back, the jeep will fly over the crest and best case, you'll have a hard landing, hurting your suspension and worst case, the jeep will flip over.

Bisso was all smiles on this day out playing in the dunes. He was doing the best of the group as he honed in the controls of his Jeep Cherokee, a durable 4x4 respected for its simple and rugged build. The Cherokee was assembled in Egypt by Arab American Vehicles, a joint venture setup in the 1970s who also assemble other Chryslers and Kias. The domestic Egyptian automobile market is fiercely protected by the government as is evident by their super high import duty on foreign cars and their ridiculously high carnet costs for travelers. It cost me an extra $600 (in carnet fees) just to temporarily import sanDRina into Egypt, but it was worth it. 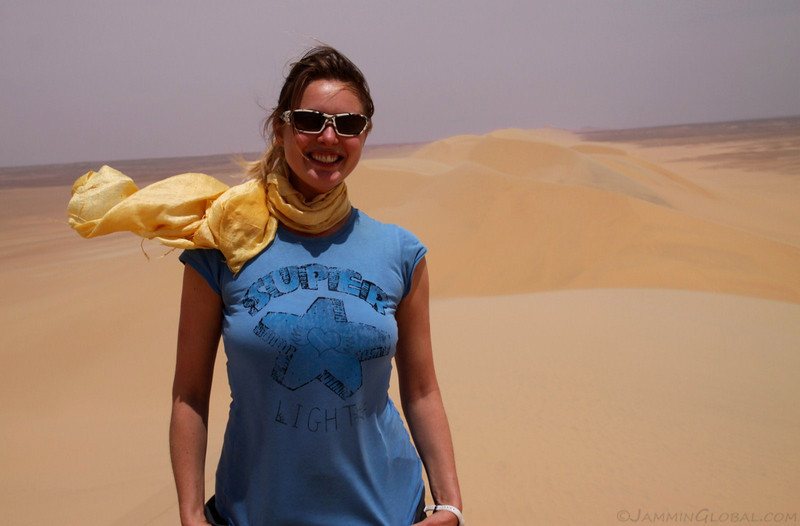 While the drivers carried on with their course, Ava and I walked the dunes. She's from San Francisco and we met in Mendoza, Argentina last year as we were both staying with the same CouchSurfing host there. Our paths only crossed for a few hours then, but we made a connection as she had a passion for India and was well-versed in philosophical discourses on the mind and the Universe. I lean a bit towards the utilitarian side in the debate about the meaning of life, while she leans more towards the spiritual and agnostic side. As luck would have it, she contacted me a few weeks back to see where I was and we realized we would both be in Cairo at the same time, so we met up. 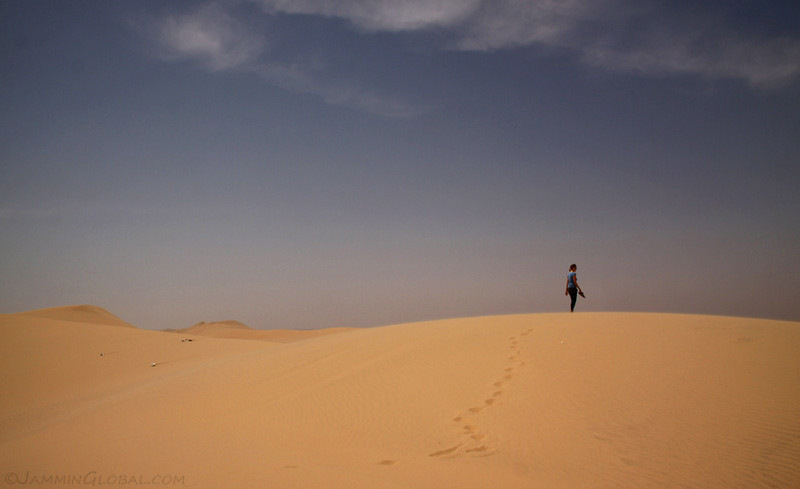 Footsteps leading off into the desert...

...and then leaping off the desert! 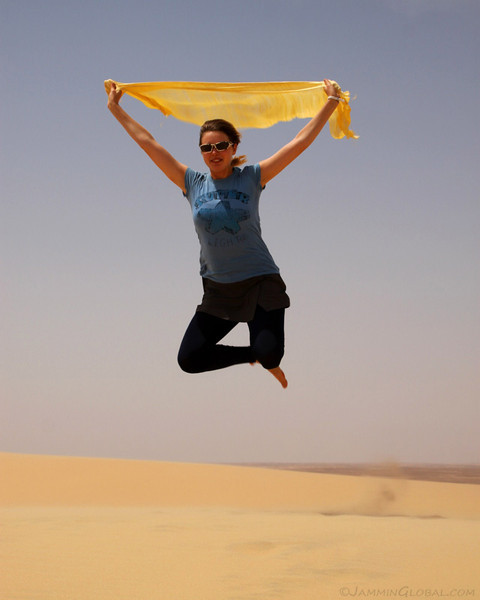 Ava is a free spirit and her positive energy sprung off the desert wanting to be carried away by the wind. 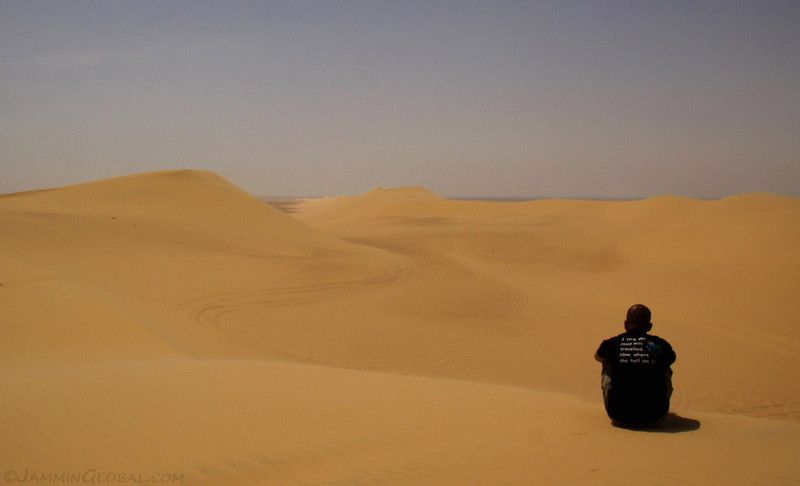 There's something peaceful about being out in such a grand, open space with nothing but sand and sky in view.

Climbing up the steep dunes.

Looking back at our footprints on the ridge with the 4x4s going about their rally course. The area was actually a huge flat expanse except for this thin, long sand dune, which probably moved over time with the desert winds.

Thrilled to be out in the dunes of the Sahara.

Coming down from the dunes. 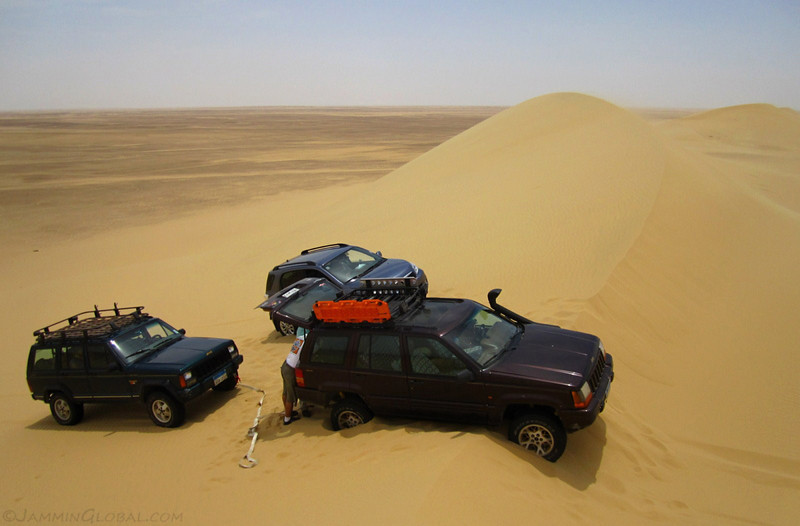 Every once in a while, one of the drivers would get stuck and then the others would come to the rescue. Everyone had sand ladders and tow ropes.

A slight yank with the tow rope was all it took to free the stricken vehicle. I was skeptical of that Daihatsu at first but then became impressed as she tackled all the same dunes as the other regular 4x4s. It didn't have as much ground clearance, but its 4x4 was effective enough. Also, most of the vehicles, including Bisso's, were automatics.

We got there as early in the day as possible to avoid the intense heat of the afternoon. A mirage looking like a lake, which is just the heat haze from the desert tricking the eyes.

Nothin' but sand and sky. The colors look a little strange as I was trying out a Neutral Density filter on my Canon 50D.

Towards the end of the course, as the drivers started getting a bit tired, more of them were getting stuck. Here, Bisso gets a yank from Sharif over the crest of this dune.

Our fun in the desert got over by about 1pm and we headed back into Cairo. Passing apartment blocks on the edge of the city. There was intense construction underway spurred by Egypt's high growth in the last few years. More housing is also needed due to the increase in rural to urban migration, especially as the productivity of the Nile delta drops. However, unemployment is still very high, which was definitely a factor in the revolution and the growth of people power. 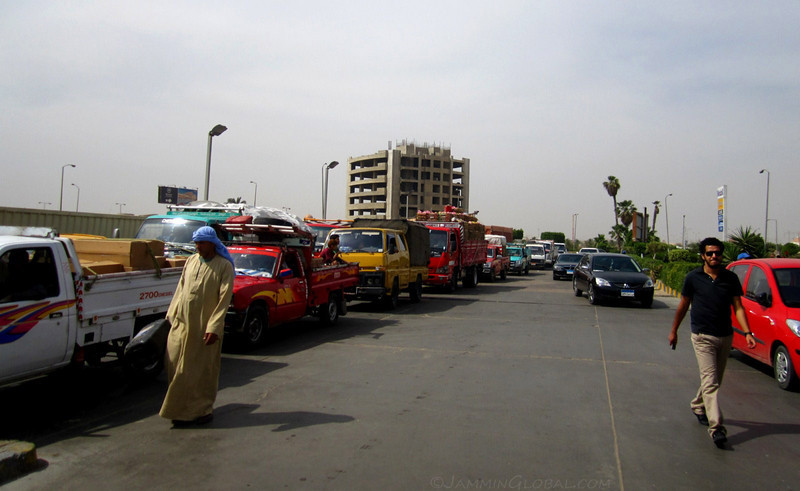 A long line for diesel at a filling station. I was a bit worried as I was planning to leave Cairo and head out across the desert in the next few days and was trying to figure out if there was a fuel shortage or not. Rumors were abound that the transitional military council was artificially limiting fuel supplies to put pressure on the people, maybe to get them to see that things were better before the revolution.

Driving through Giza and oh yeah, something about some pyramids there... (coming up in the next installment). 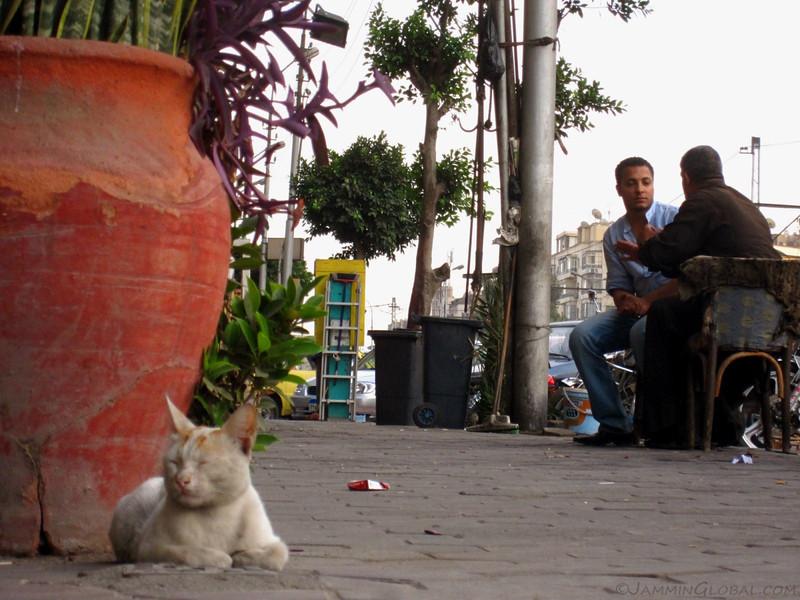 I spent the evening with Bisso and Ava and after a nap through the afternoon heat, we walked around Bisso's neighborhood in Heliopolis, an affluent suburb initially catering to wealthy residents in the early part of the 20th century. A Egyptian kitty catching some shut-eye on the street while men talk at an outdoor cafe.

A dried snacks shop in Heliopolis. This is a mountain of seeds, not sure what kind with sunflower seeds behind it. 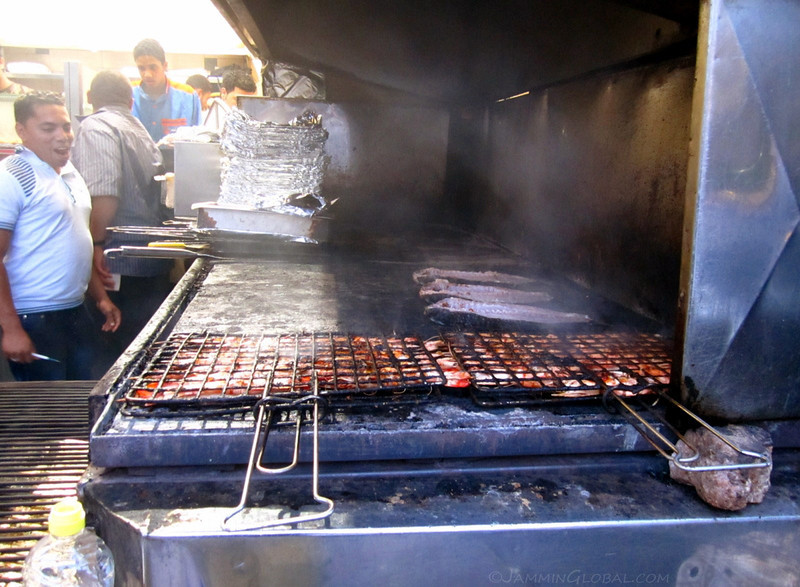 Fresh fish and shrimps being grilled such that their tempting smells brought in passersby from the street.

In the evening, I was requested to prepare my chicken curry as Ava missed it the last time we met and it was a nice way to say thanks to Bisso for the fun day bashing dunes. Also there were Bisso's friend, Ihab and his friend, Joana. 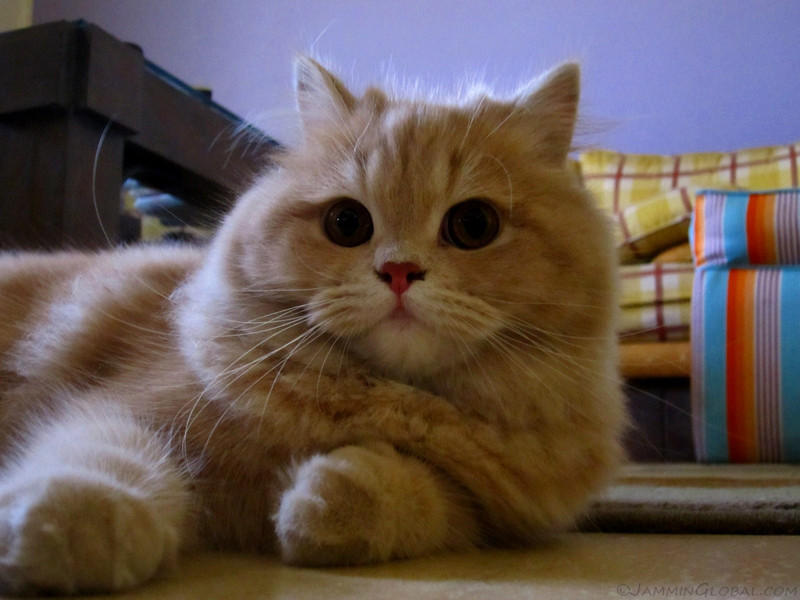 Compared to the street cats I had seen so far in Egypt, Lili was a pampered princess.

The kind and warm Bisso in the elevator of his apartment building. Note that there's no door on the elevator carriage, so don't lean on that side.
_
I enjoyed the fun day out in the desert with Bisso and Ava and was happy to meet this wandering soul again. She's on a similar kind of trip as mine, wherein she sold everything and is roaming the planet in search of the next phase of her life. I hope to meet her again, probably in India.

Having only read about dune bashing before, I was thrilled to finally take part in it and play in the desert. Being a driving enthusiast, I was impressed with the technique needed to power up, throttle down, crest and then power down the dunes. Good luck to Bisso in his future rallies.

Next: Egypt, Part 8: The Pyramids of Giza and The Sphinx