After experiencing Rio, it was time to head south and get into Argentina as their summer was ramping up. Since I was going to be passing by Picinguaba, it would've been rude not to stop and say hello to my friends there and I hoped the weather would be nicer this time, as it was.

Heading south on BR-101 as it hugs the coast with views of islands and mountains blurring the distinction between land and sea. 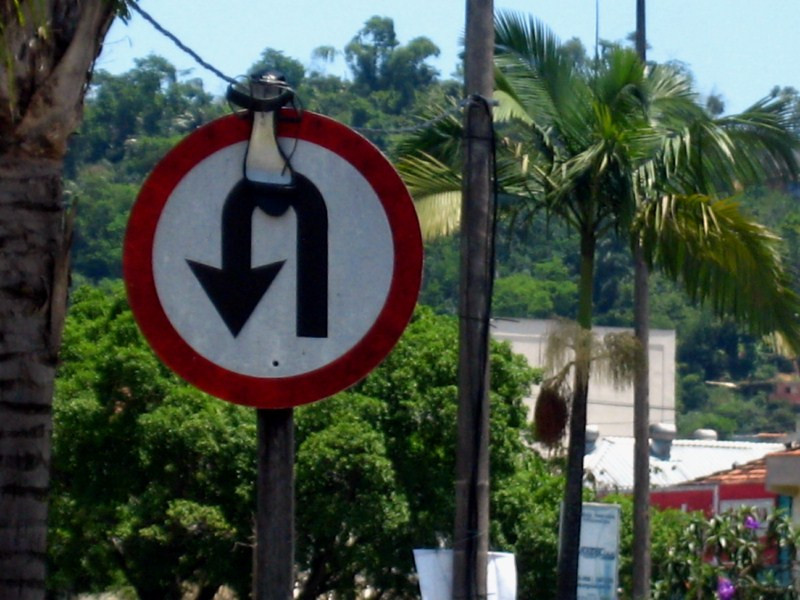 Stopping for some lunch in the resort town of Angra dos Reis and noting what the locals think of their u-turn signs. 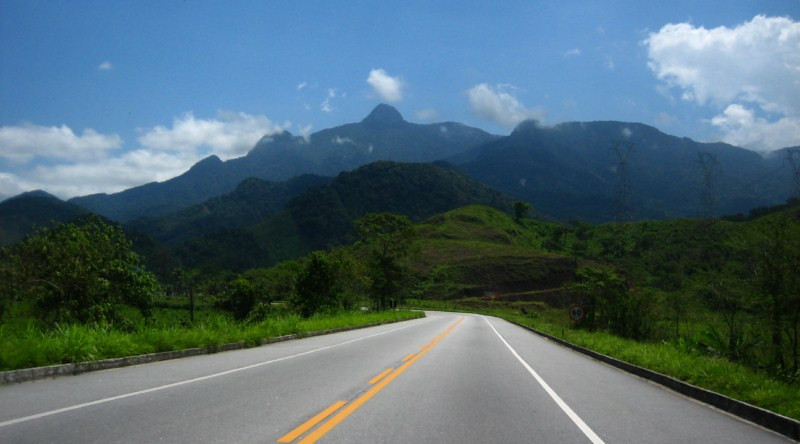 It's a beautiful drive along the Serra do Mar on a clear and sunny day. 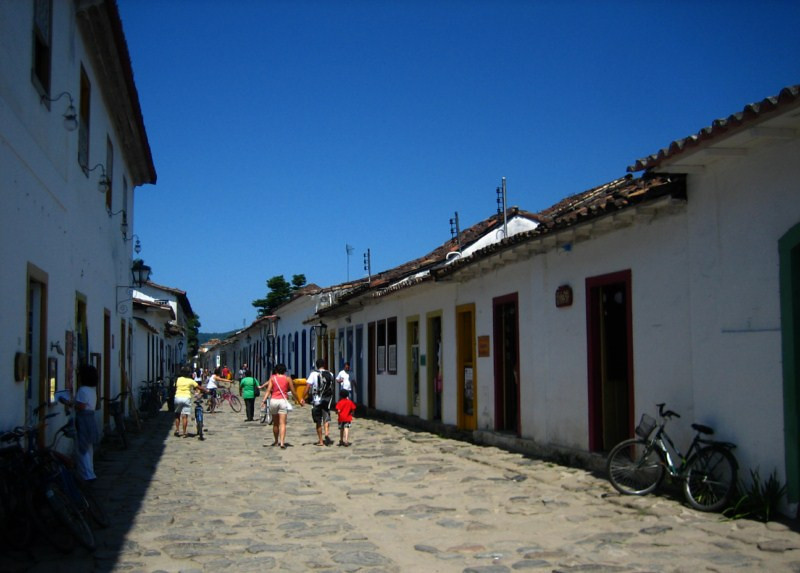 Having a quick look at Paraty, a colonial town known for its charm and lined with cobblestones. If I didn't know about Picinguaba a bit further down, I would've probably stayed here longer. 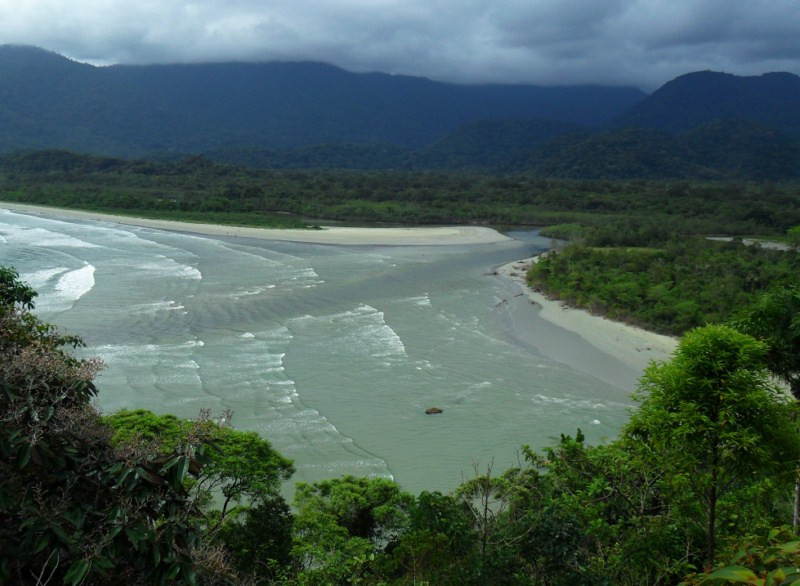 The dramatic entrance to Picinguaba, passing by this shallow bay as the road winds down the mountains into the cove where the village sits. 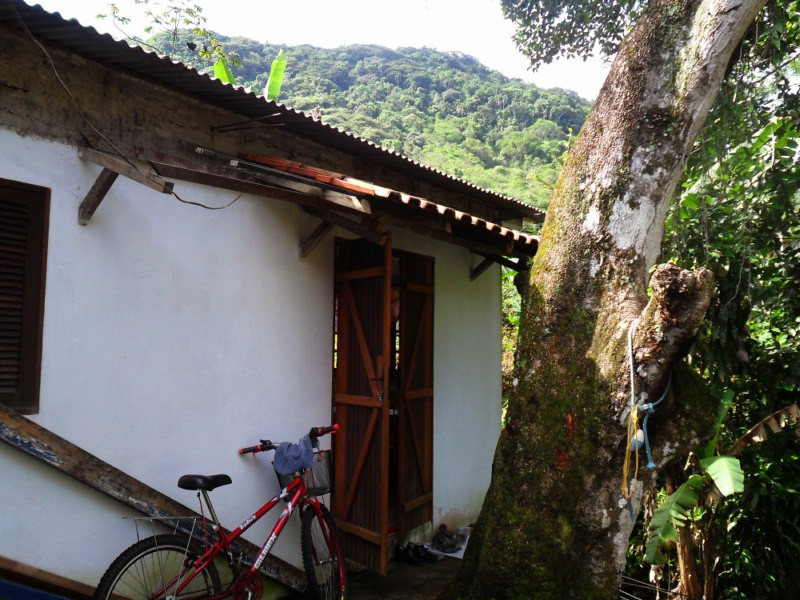 A familiar sight, Carol's home for a few months in Picinguaba. 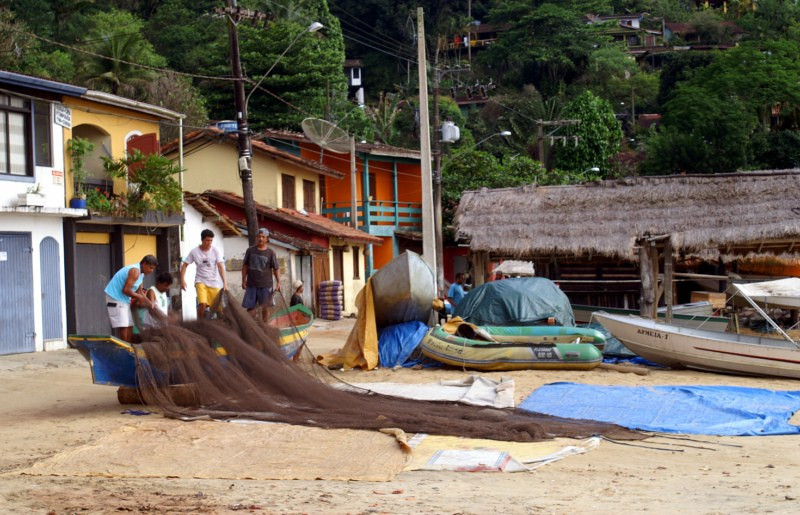 In the afternoon, I lounged about on the beach, writing and noting the life around. Fisherman here are preparing the nets for their early morning shift. Besides one hotel and a few shops, most everyone else's life revolves around fishing. 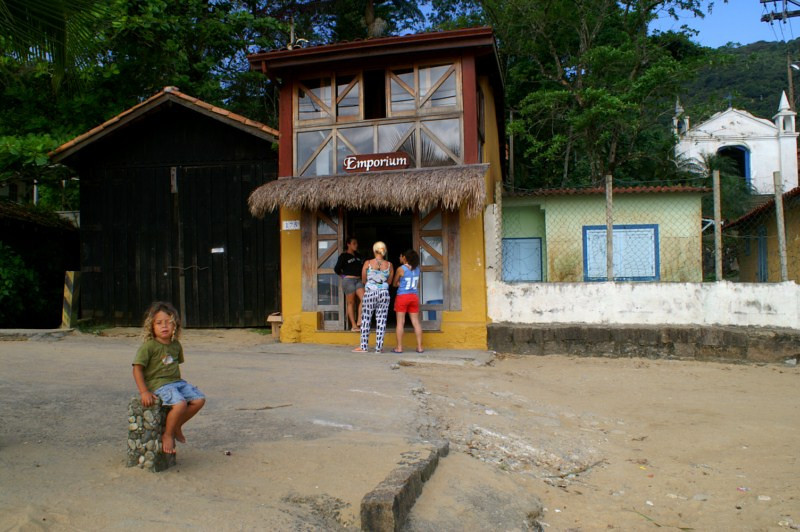 A souvenir shop on the beach.

A beautiful sunset from Picinguaba. Even though we're on the eastern coast of South America, the village sits on the south-western tip of a peninsula looking across a huge bay, providing nice views of sunsets. 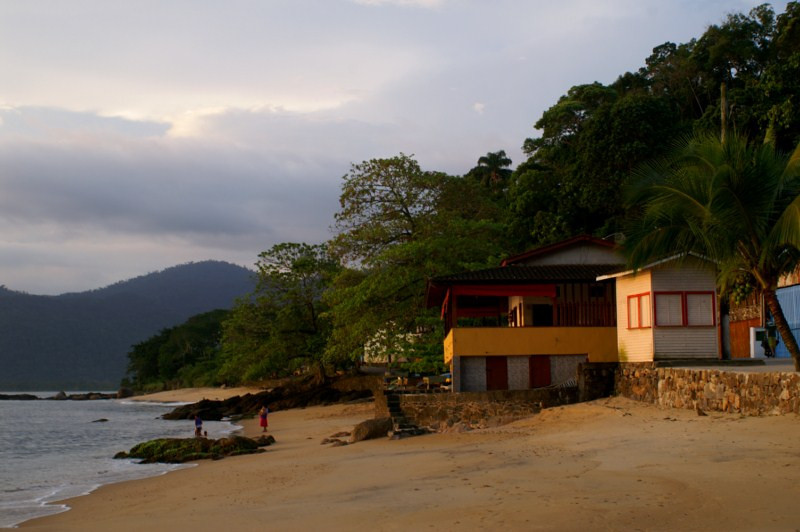 The outdoor cafe where I spent the afternoon, taking inspiration from the waves and putting it into writing. 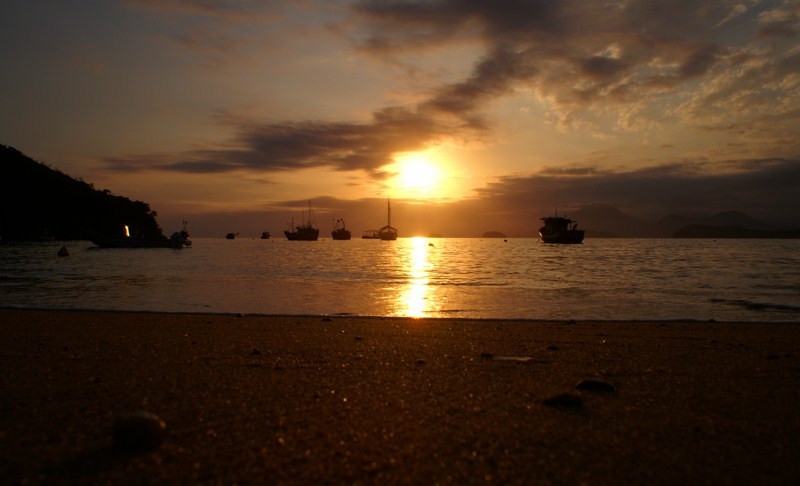 The waters calmed as the sun set. 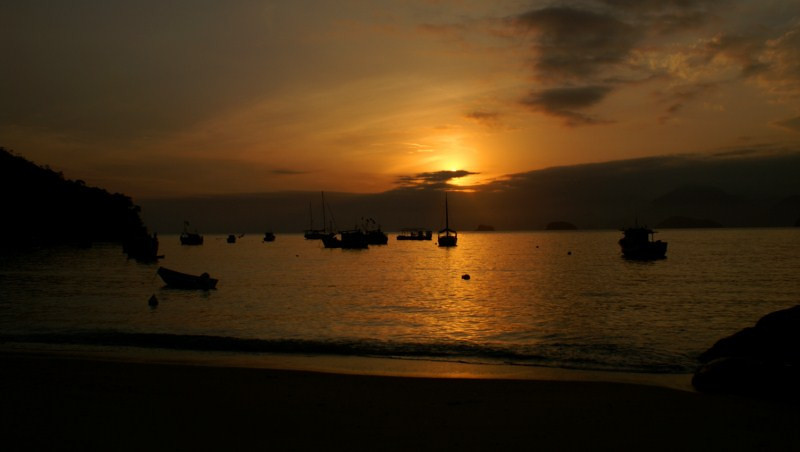 And it quickly went dark as Sol went behind some dark clouds. 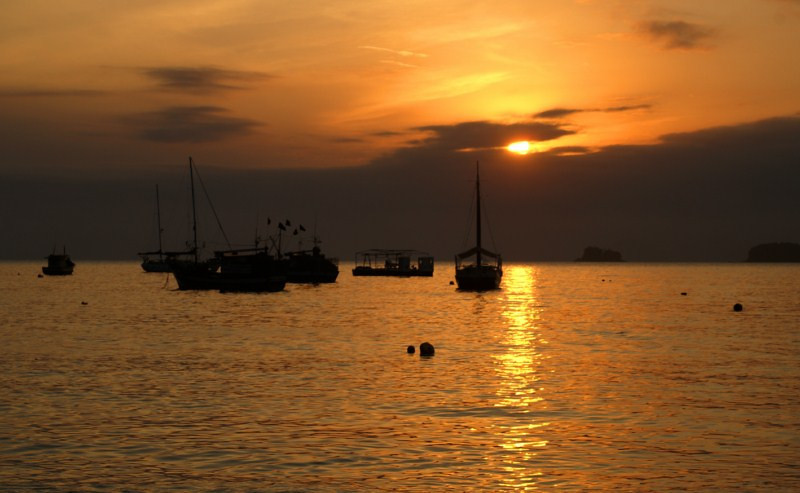 Peek-a-boo. The last rays glinting across the still waters before the sun disappeared behind low lying clouds. 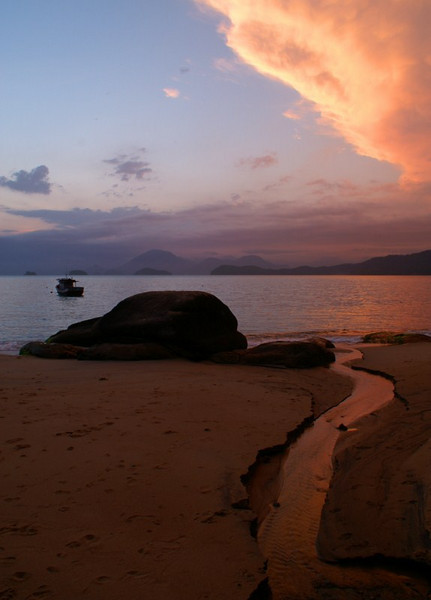 The rays from the set sun reflecting off high clouds and lighting up a natural drain across the beach into the sea. 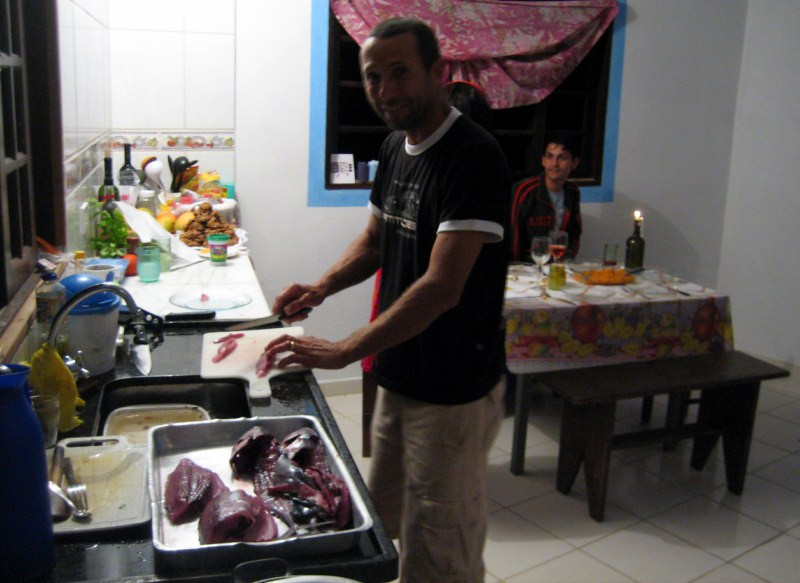 Carol was throwing a small party that night and in the ten days that I was in Rio, she befriended Carlos here, a next door fisherman and she got him to bring over some fresh fish and prepare it. 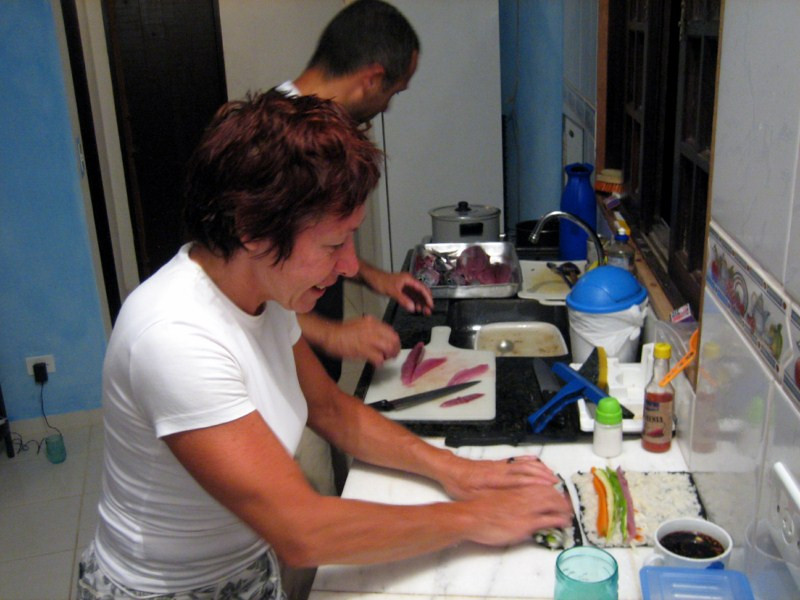 Carol has been enjoying her time in Picinguaba and was sad that her time here was coming to an end in a few weeks. She's preparing sushi rolls as... 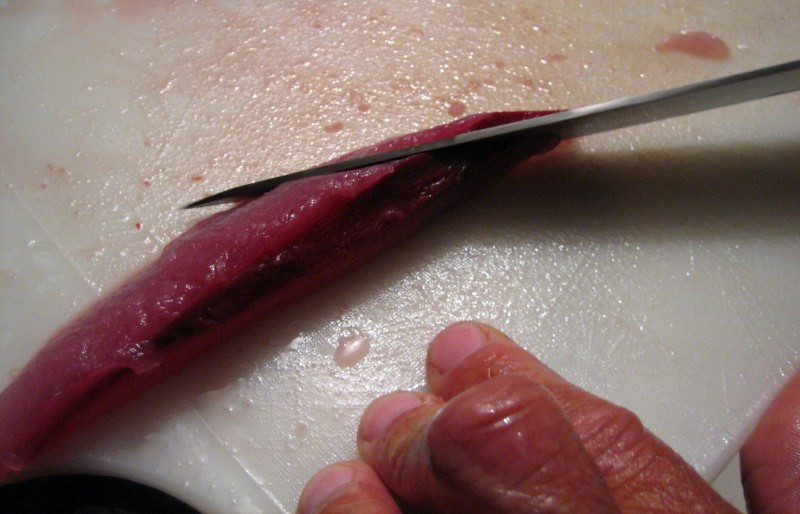 ...Carlos cuts up some fresh sashimi. 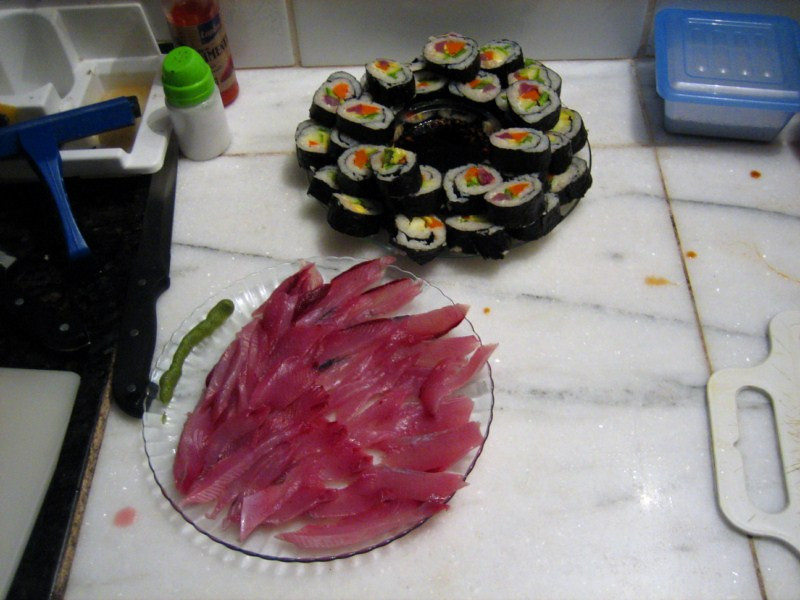 Fresh sushi and sashimi, straight from the sea. 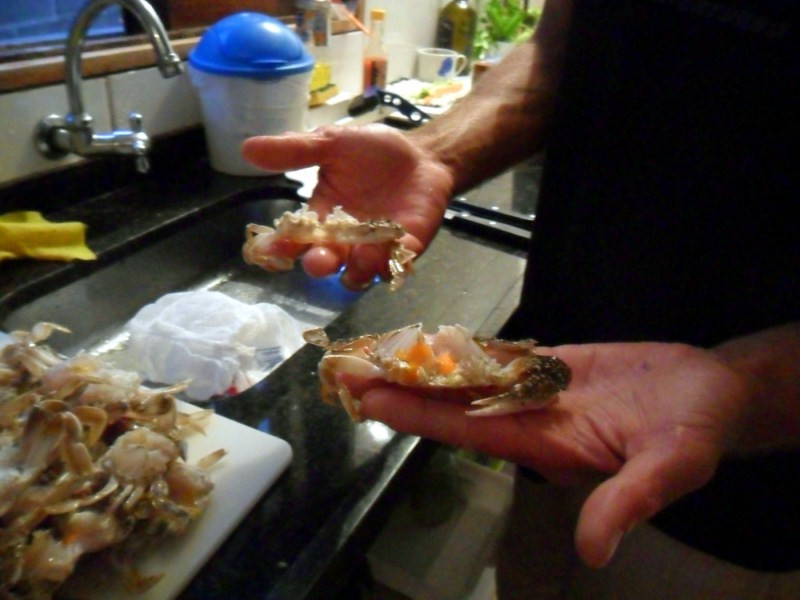 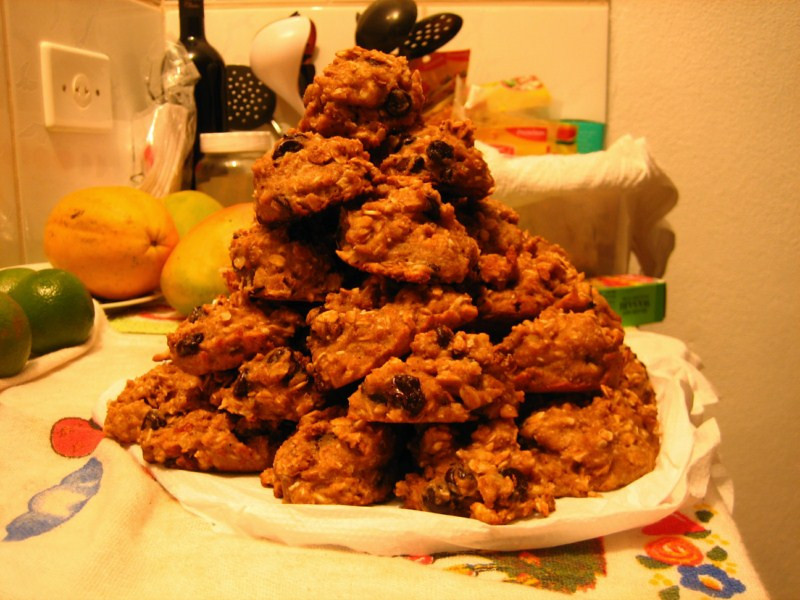 And typical of Canadians, we had baked oatmeal cookies for dessert. 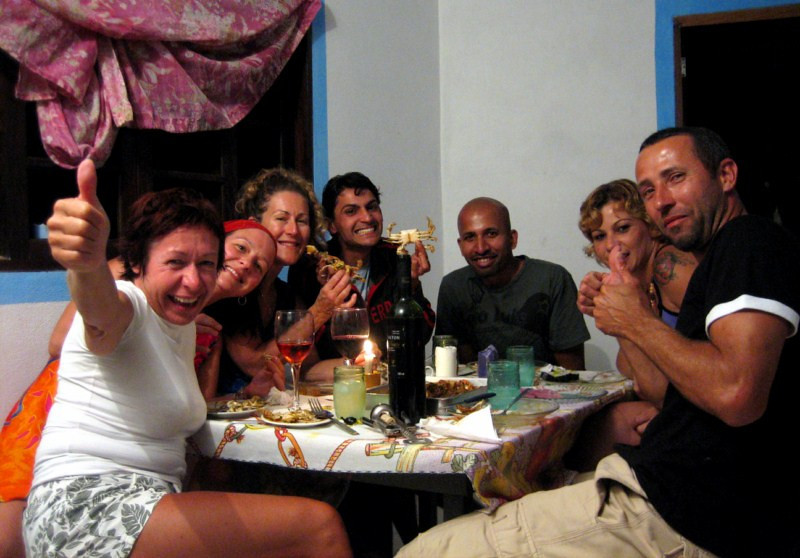 Dinner at Carol's with some of her friends from Quebec visiting with Vaigenio, his sister and Carlos. 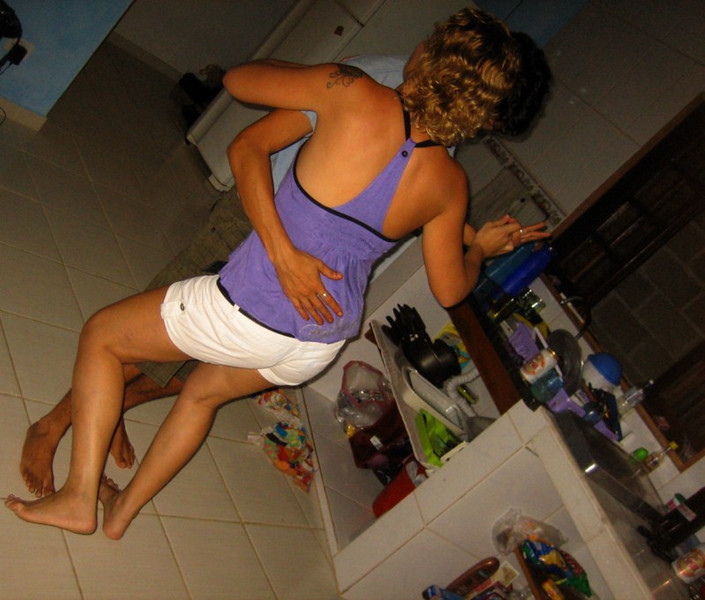 After dinner and lots of wine, the dancing started (iPod speakers an essential item for impromptu dance parties). Here, Vaigenio and his sister, Maria are dancing the forbidden dance of Lambada in a Brazilian beach town. The moment was more special than just that as these siblings weren't on talking terms until this evening when they were separately invited for dinner. It's a small village and family politics can dictate life here. Their father had about 13 children from the same mother and some drifted apart while others grew close. Vaigenio said he didn't want to be seen in public with Maria but they decided to dance for us to show how it's done. I hope this evening thawed their complex relationship a bit. 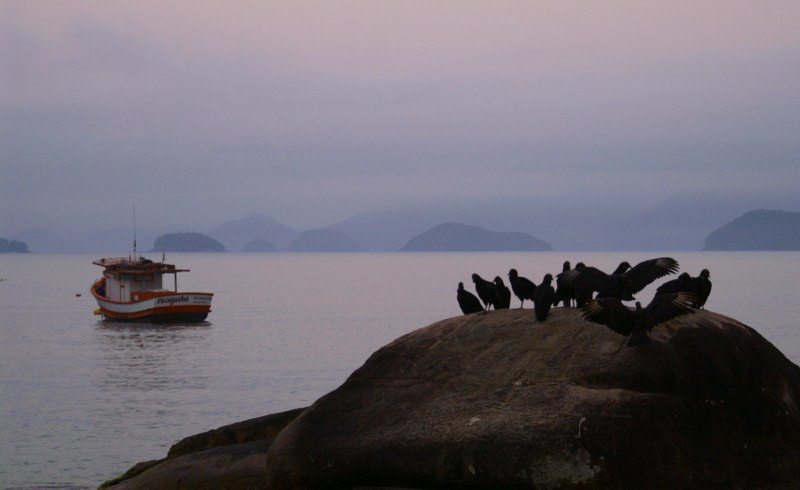 I got up early the next morning and observed a fishing village come to life. 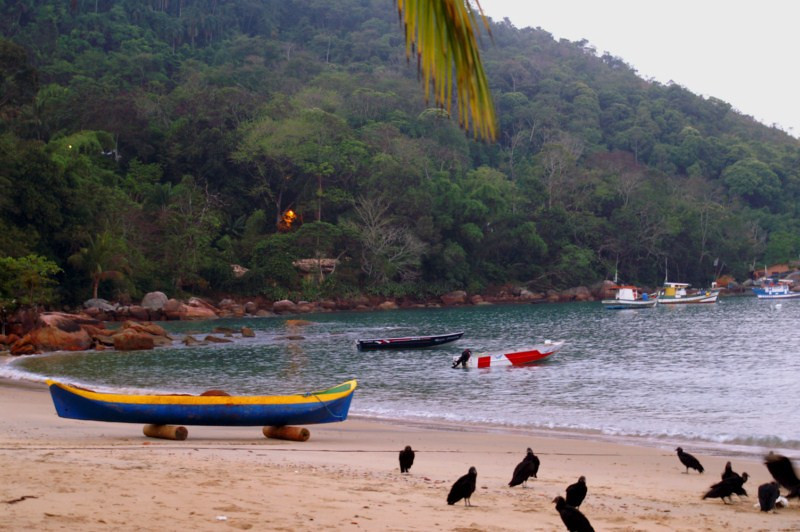 Older, traditional fishing boats, which were moored on shore were rolled down to the water on two logs. 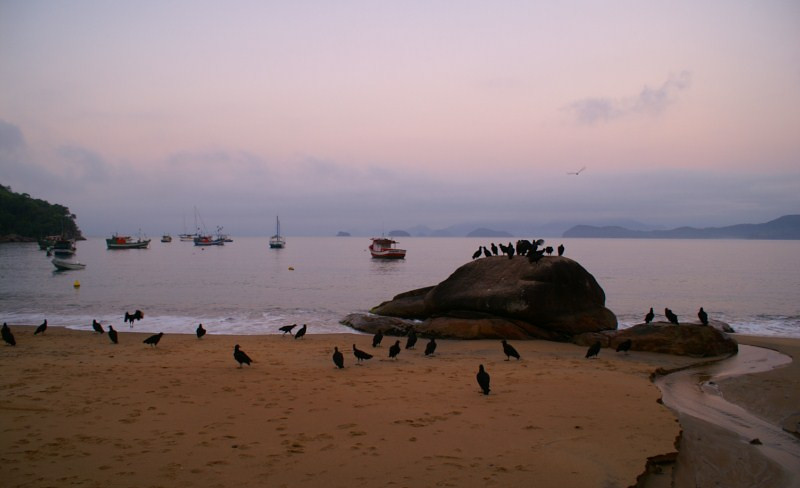 Ravens abound waiting for discards from the fishing nets. 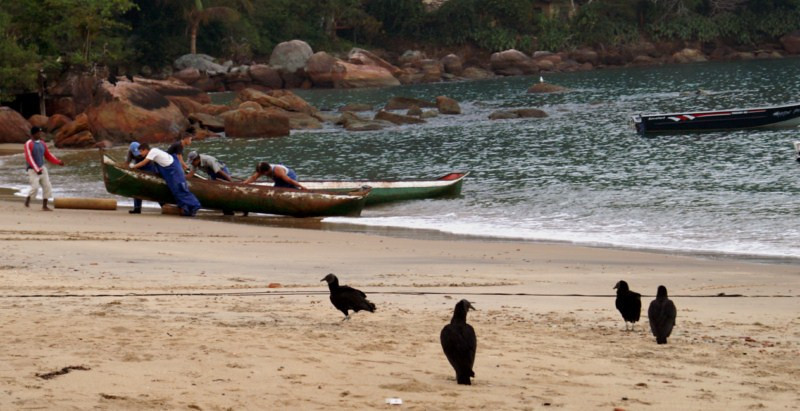 As some boats left, others were coming back in.

On the surface of it, life's a beach here. Kids playing football near the surf. 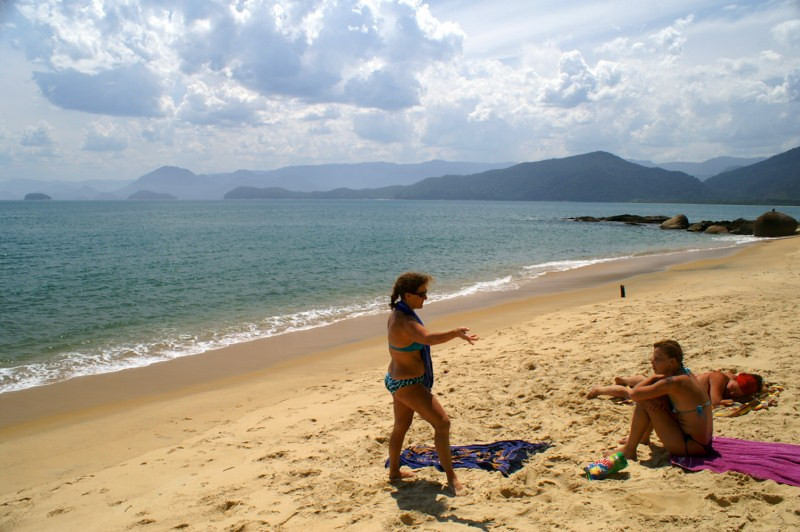 I spent the day with Carol and her friends and Maria lazing on the beach. 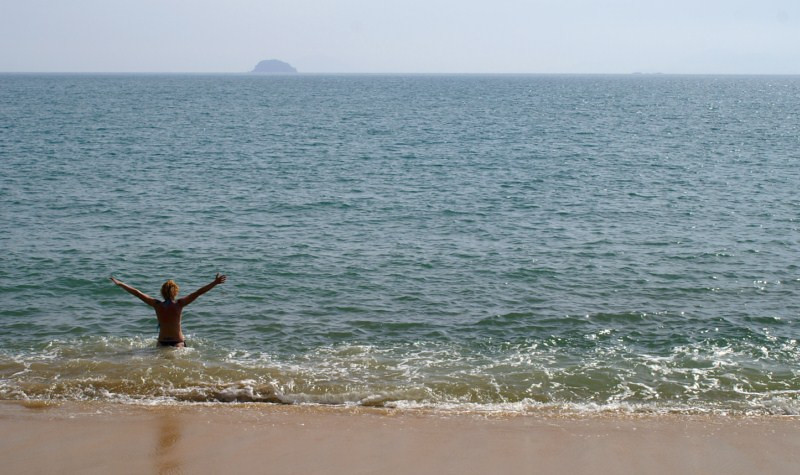 Maria going in for a dip in the Atlantic. 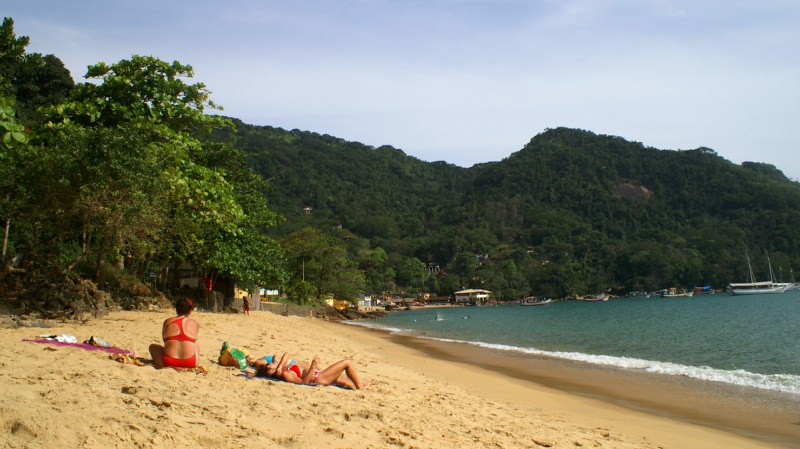 Besides snorkeling for a while, we relaxed and dwelled on the fact of enjoying some sun in southern Brazil. 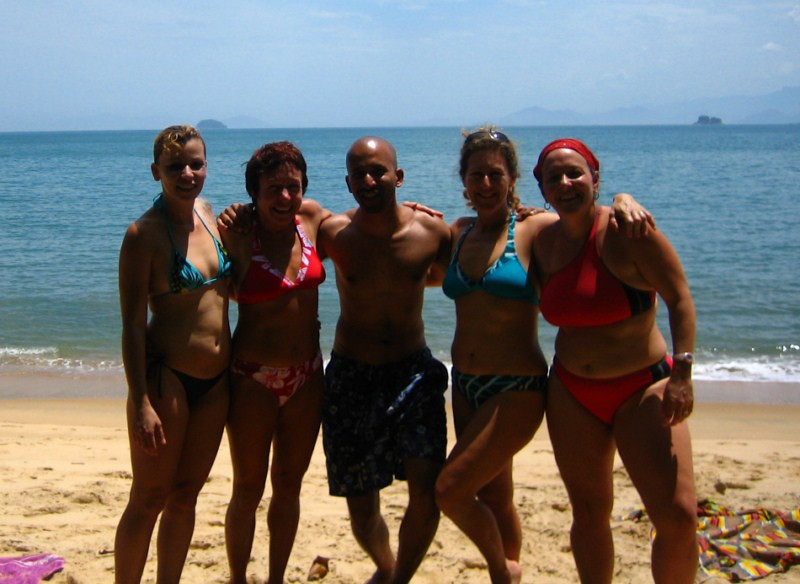 I was in the middle of an interesting conversation where the Canadians were saying how these were the smallest swinsuits they would dare wear (recently bought in Ubatuba) and Maria, of course saying they should go smaller as she was in her bikini. I knew Brazil would be fun, but you never know how much until you get here. 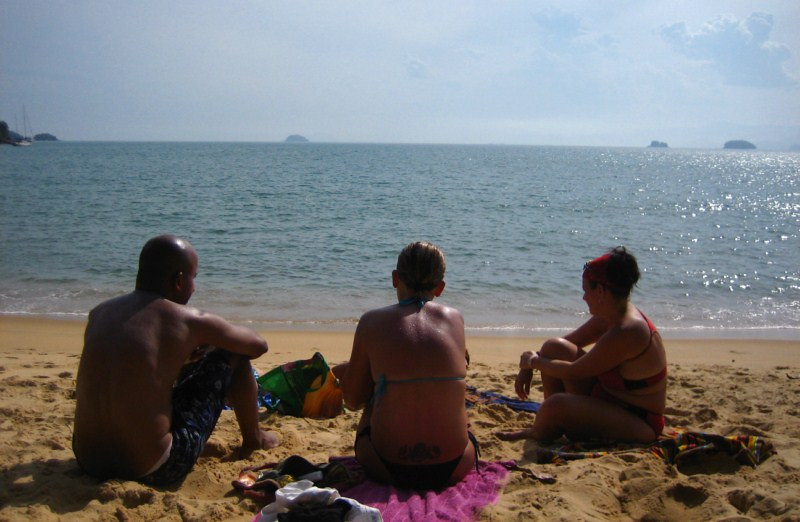 As I was nearing the end of my time in Brazil, my Portuguese was finally coming strong and I was translating between Maria and the Canadians. It took about two months for my Spanish to flow easily and it was about the same time for Portuguese to start flowing, having superseded Spanish as the 'other' language in my brain. But now I was going to be entering Spanish-speaking Argentina and I hoped I could switch back easily.

Sunset across the Picinguaba bay, leaving me with a good taste for Brazilian beach life. 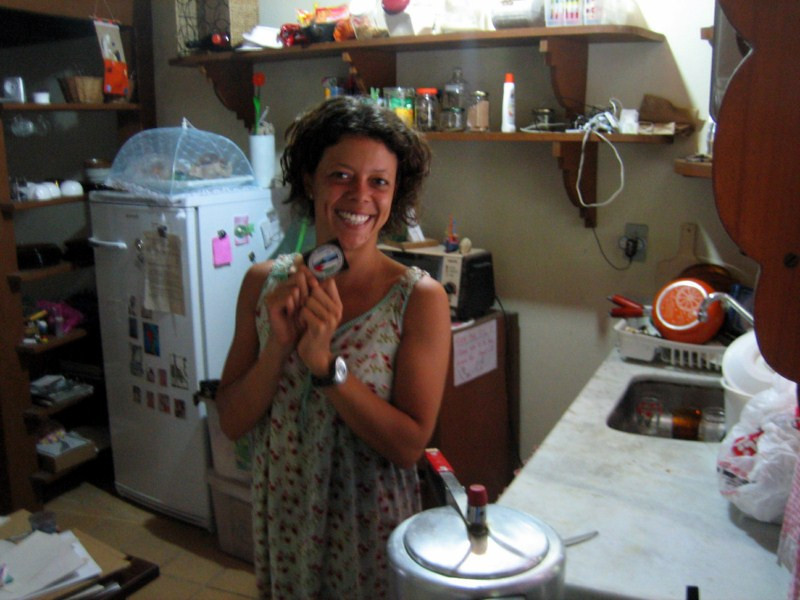 Saying bye to Talia in the morning. She was working extra hard during my second visit, so we didn't spend much time together but we shared a meal. She wants to do something for the community here, but without treading on their customs. As she has realized, we make global change by acting locally and I hope she succeeds.
_

It's the location and the people I knew there that drew me in for a second visit to Picinguaba and I left with a positive vibration. Life isn't all a beach and we wouldn't achieve the things we've done if everyone lived on a beach, but there's something special about seeing how simple and full-filling life can be.