I spent two days in Salvador da Bahia, the center of Afro-Brazilian culture and the first colonial capital of Brazil. It's the third biggest city in the country and is considered Brazil's capital of happiness due to its lively nature and friendly populace. I connected with Lara thru CouchSurfing and she showed me around her beautiful city. 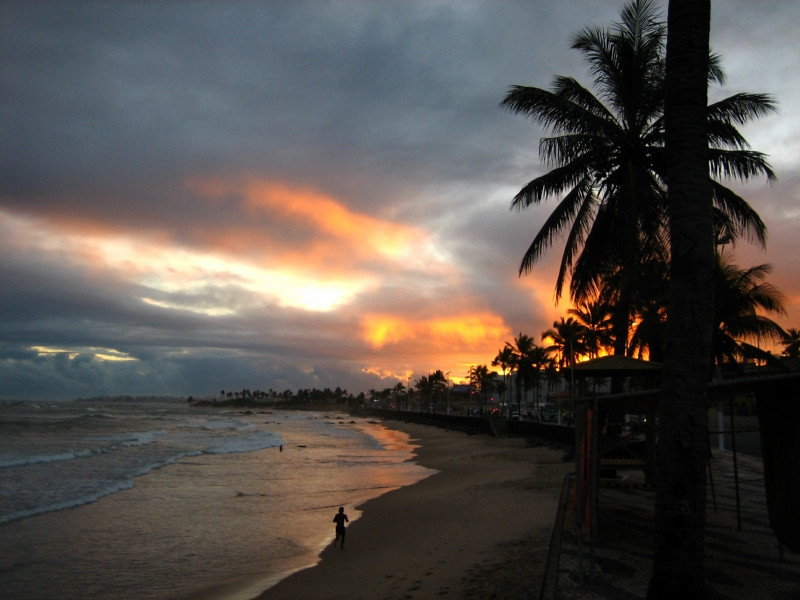 It got dark as I rolled into the city and I had to capture this awe-inspiring glow from the setting sun over the beach on the eastern part of the peninsula that Salvador sits on. 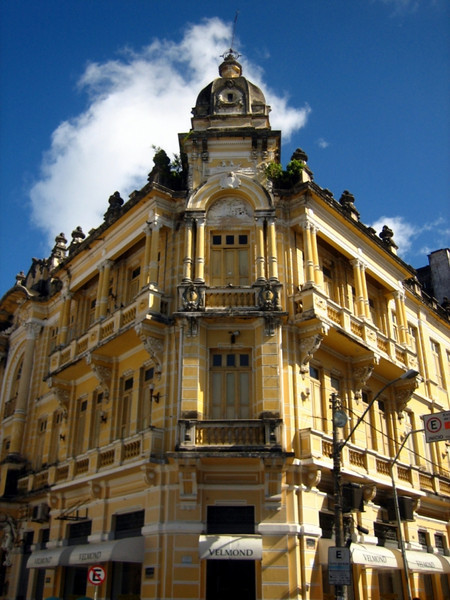 Old colonial buildings in Pelourinho, the historic center of Salvador. The city was founded in 1549 by early Portuguese settlers and is the site of the first slave market in the 'new world' with African slaves arriving to work on the sugarcane plantations. The name Pelourinho refers to the whipping post in the central plaza that was used to discipline unruly slaves. 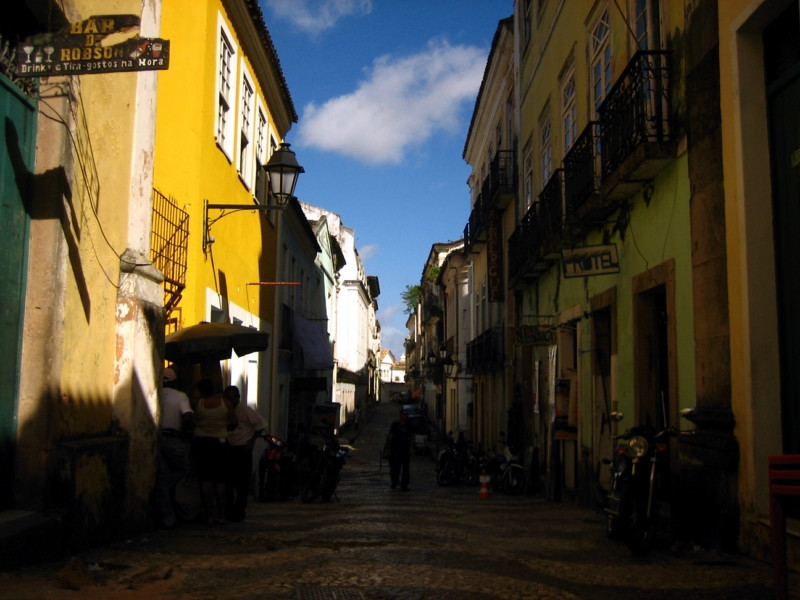 Pelourinho is a very pleasant place to walk around nowadays and is a UNESCO World Heritage Site. It was considered unsafe a few years ago, along with the city of Salvador, but things are changing for the better. 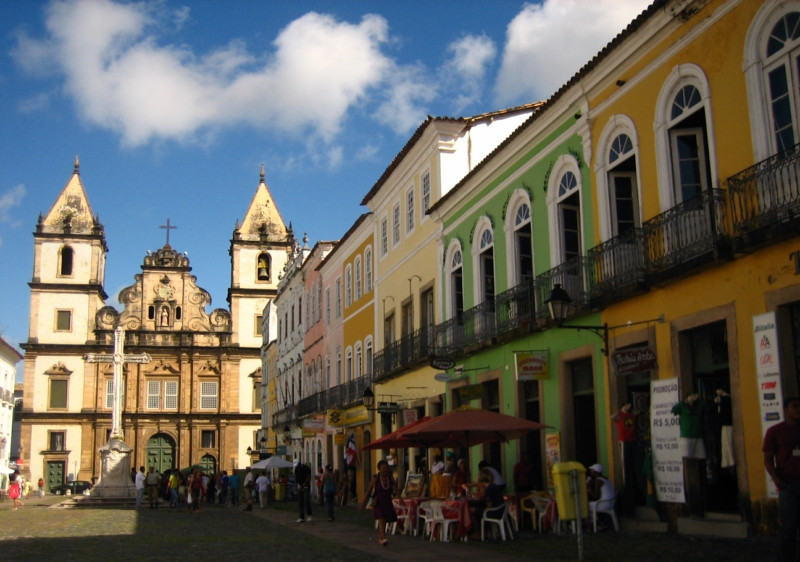 Convento e Igreja de São Francisco (São Francisco Church and Convent), built by the Franciscan Order that arrived here in 1587 but was soon destroyed when the Dutch took over these parts of Brazil. It was slowly rebuilt over a long time. Along with numerous churches, another characteristic of Pelourinho are the pastel-hued buildings. 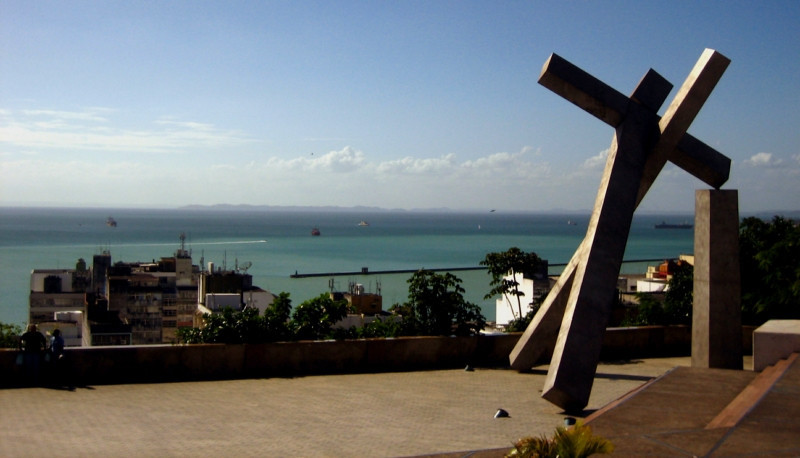 Cruz Caída, the Fallen Cross, a sculpture dedicated to the old cathedral, which was torn down to make way for a tram line. 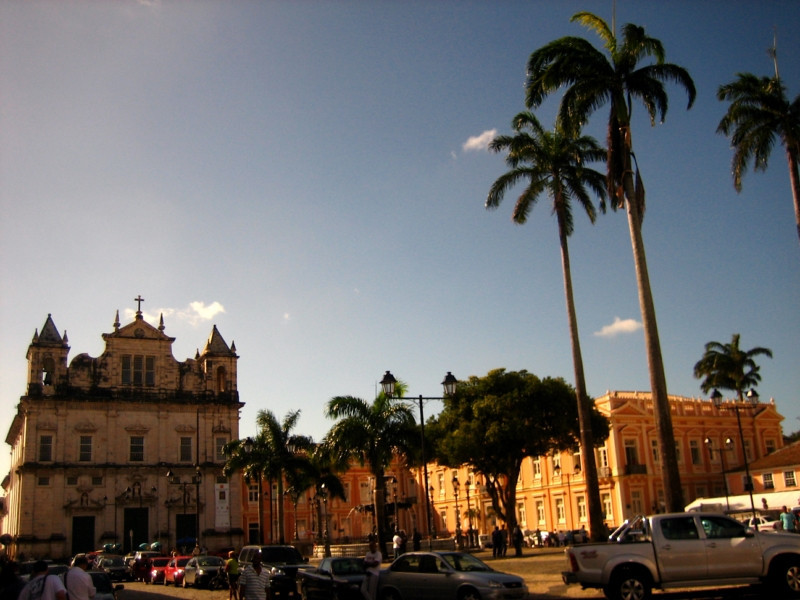 Catedral Basilica de São Salvador in the main plaza of Pelourinho called Terreiro de Jesus. The church is a good example of baroque architecture in South America and was built initially as a Jesuit school. 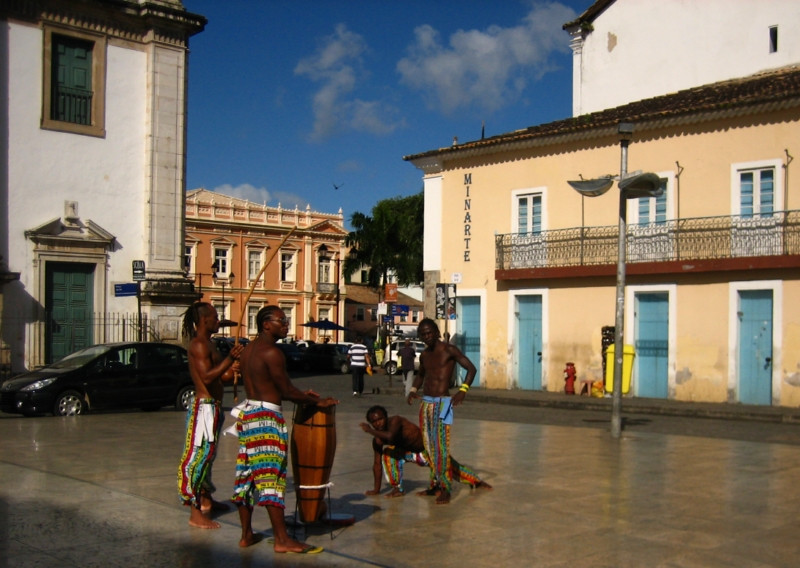 Catching an impromptu demonstration of Capoeira on Praça da Sé and being hounded for a cash donation after taking this picture. Capoeira is an Afro-Brazilian form of dance mixed in with martial arts from the cultures of the West African slaves that were brought to Brazil. Its signature moves include fluid acrobatic acts and stylized sparring. 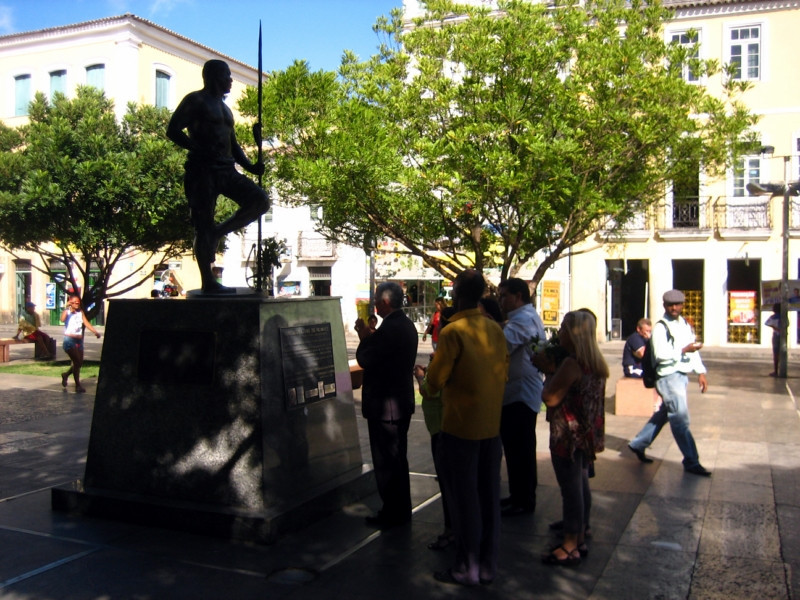 People giving reverence to a statue of Zumbi dos Palmares, the last leader of the quilombo republic of Palmares. Quilombos were settlements of escaped slaves in the interior of Brazil and their leaders, including Zumbi are considered heroes in Brazil as they represent democracy, freedom and black pride. The day he was betrayed and beheaded by the Portuguese, November 20, is the Dia da Consciência Negra (Black Awareness Day). Previously, I thought this aspect of Brazilian history was mainly the pride of African-Brazilians, but seeing white and mixed-race Brazilians giving reverence to him shows that all of Brazil respects the fight by the slaves against the Portuguese and I guess it also demonstrates how Brazil is accepting of all cultures, having immigrants from various places around the world. 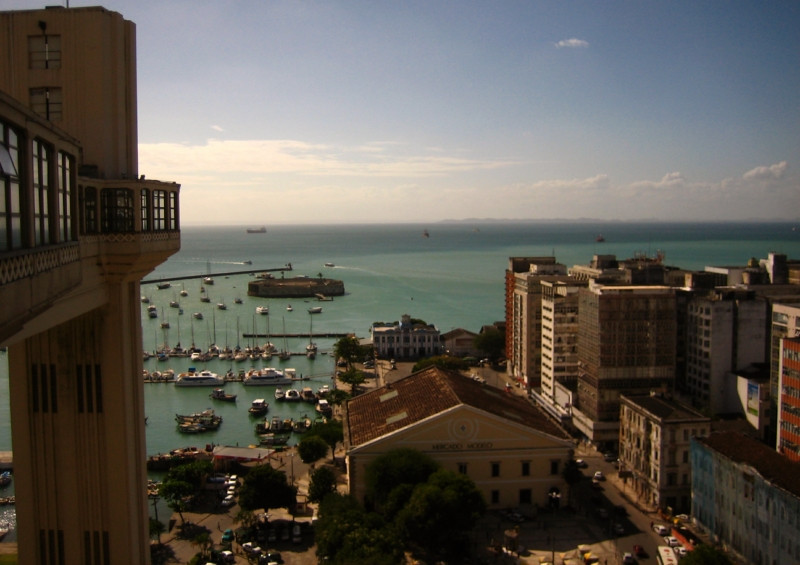 The Elevador Lacerda connecting the Cidade Alta (upper city) with the Cidade Baixa (lower city). Pelourinho in the Cidade Alta sits on a ridge that drops to the sea at the coast. The elevator was constructed in 1869 to facilitate movement between the two parts of the city. At the bottom of the elevator, which is 72 m (191 ft) tall, is the Mercado Modelo, a market building and from up top here, one has views of the Baía de Todos os Santos (All Saints Bay) and the island Fort of São Marcelo, where we headed next. 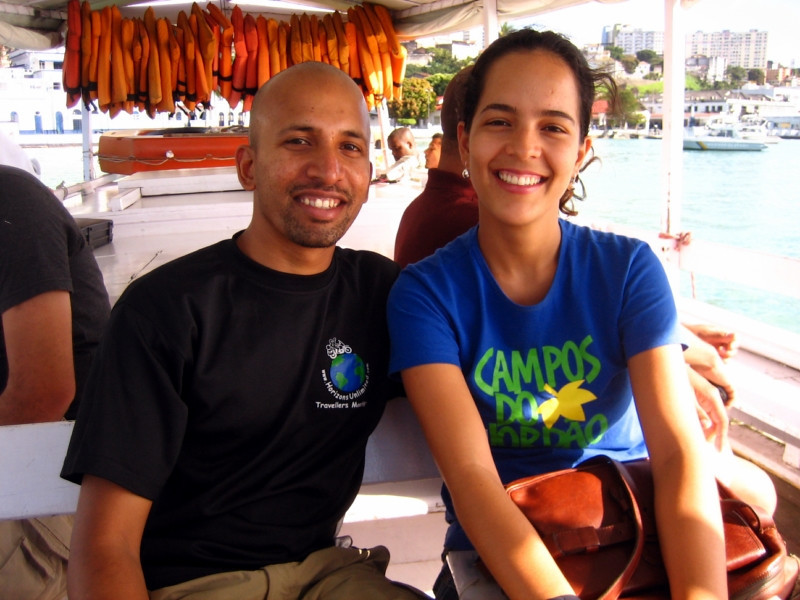 Taking a boat ride with Lara, who was an excellent host for my short time in Salvador. 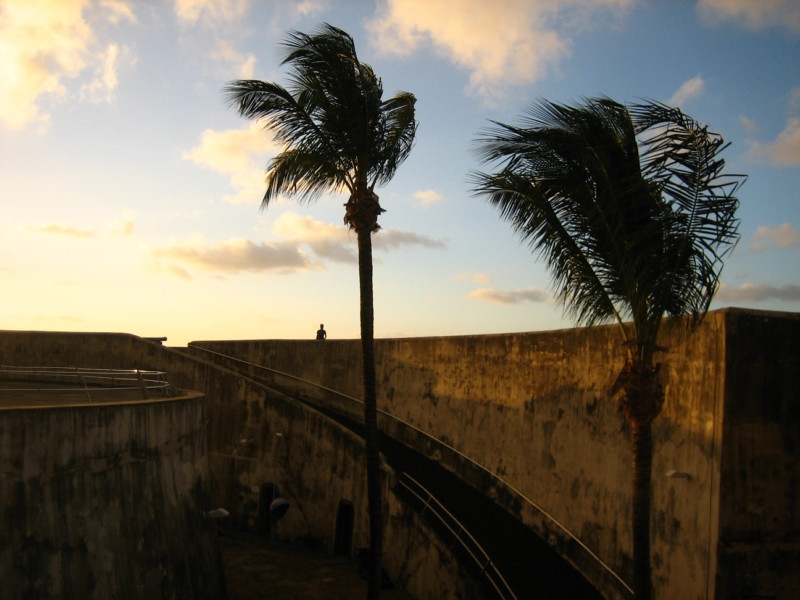 The boat took us to the circular Forte de São Marcelo, about 300 m (984 ft) from shore, built on a coral reef. 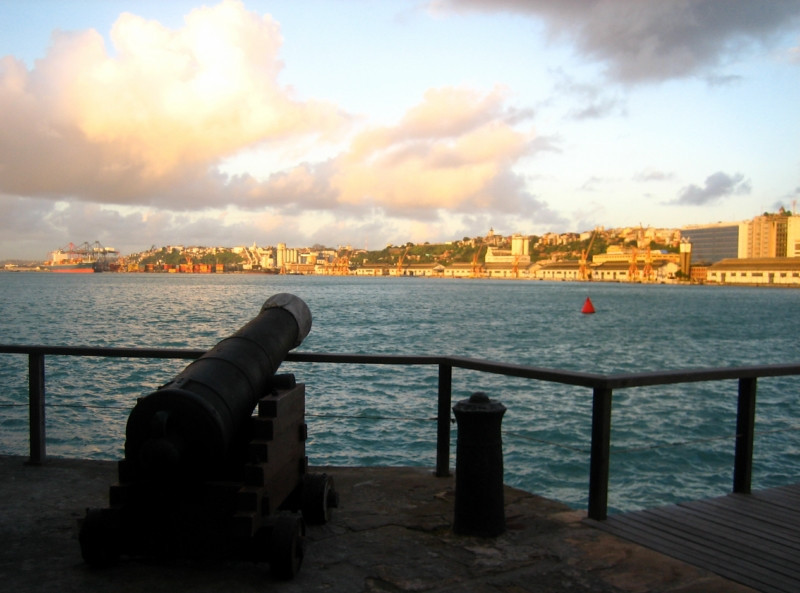 It was constructed in 1623 by the military architect Francisco Frias and charged with the role of protecting Salvador from foreign attacks. 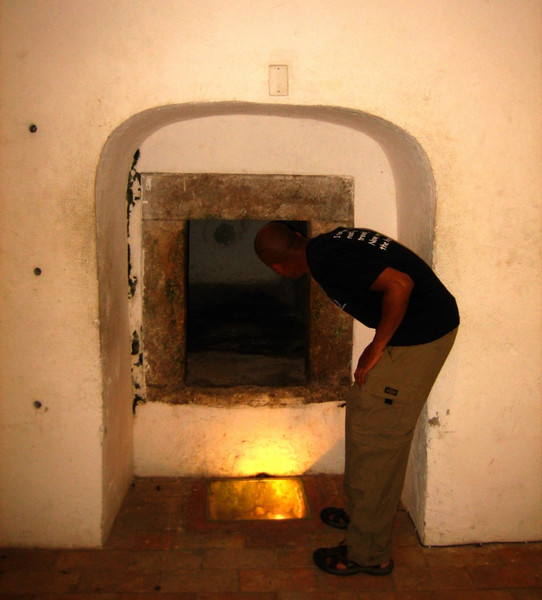 Looking inside one of the chambers in the fort where prisoners were kept for solitary confinement. 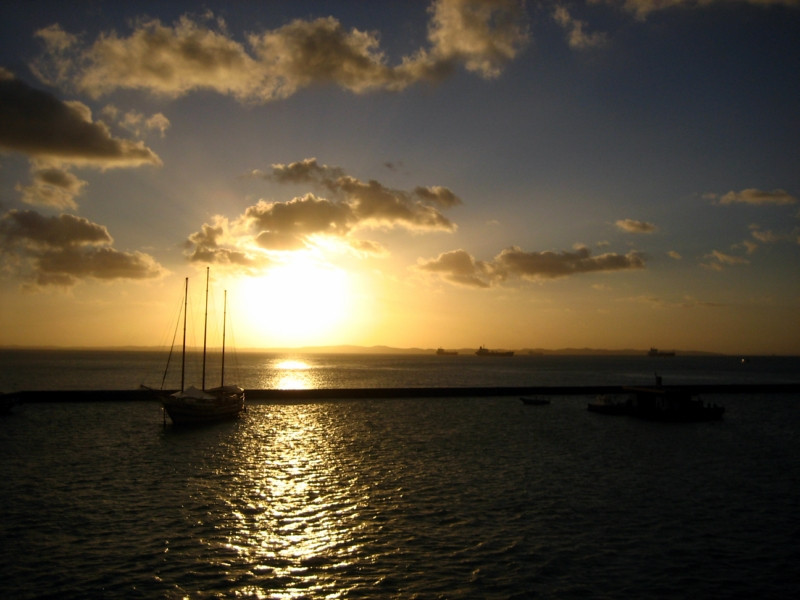 We sat on the fort wall and had some good conversations while watching the sun set. 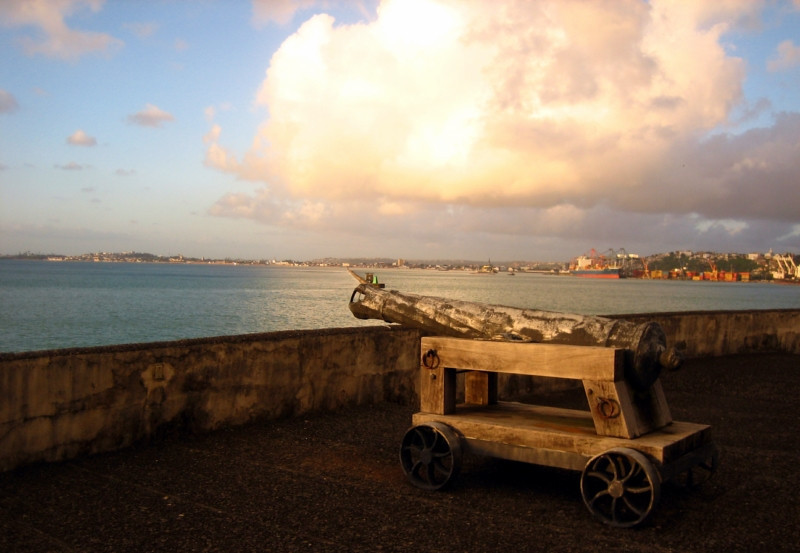 The pink hues from the setting sun shining down on an old canon, aimed at incoming enemies.

A panoramic view of Salvador with Pelourinho on the left and the newer part of the city and the tip of the peninsula on the right.
Click here to see the high resolution version. 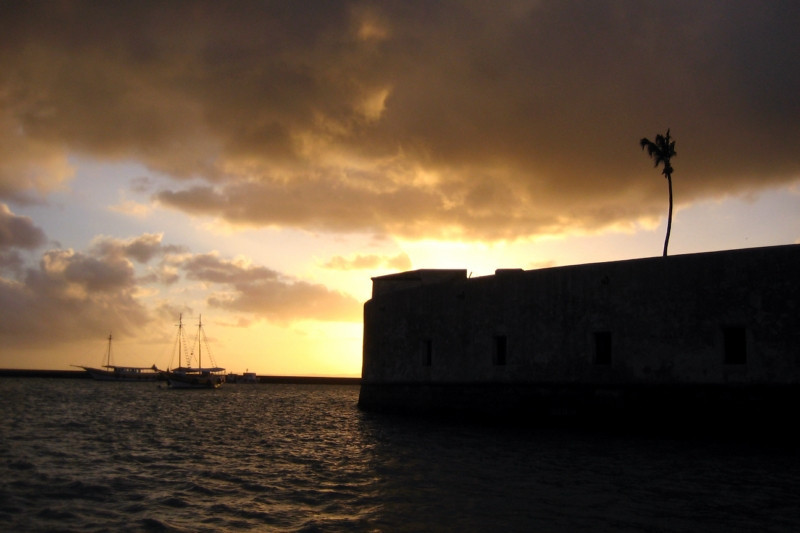 Leaving the fort on the last boat with the sun setting behind it. 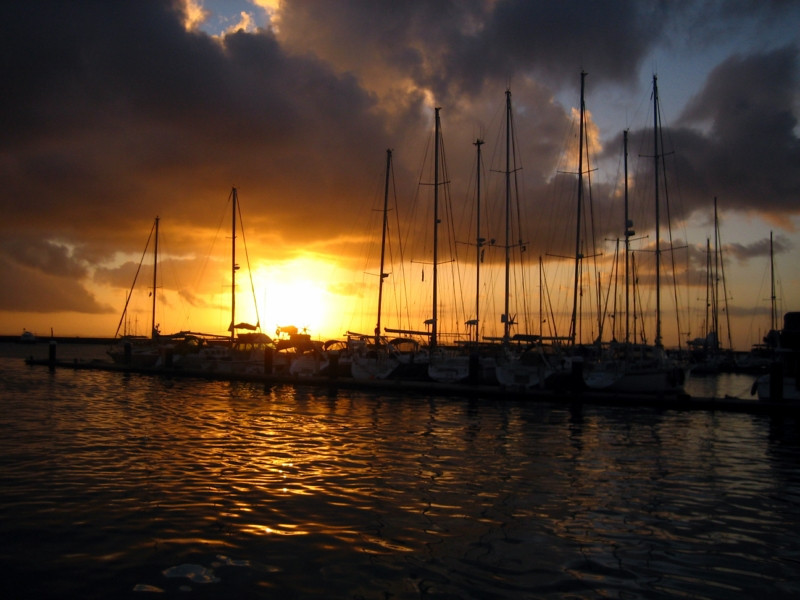 The golden rays of light reflecting on the waters of the Centro Náutico da Bahia. 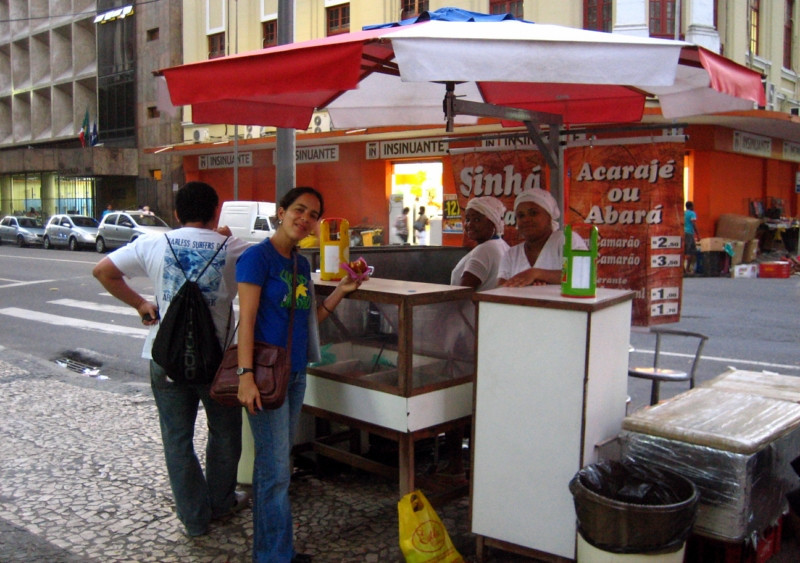 Lara introducing me to the traditional street food of Bahia at an Acarajé stand, where the women who serve it wear all white and are referred to as 'Baianas'. 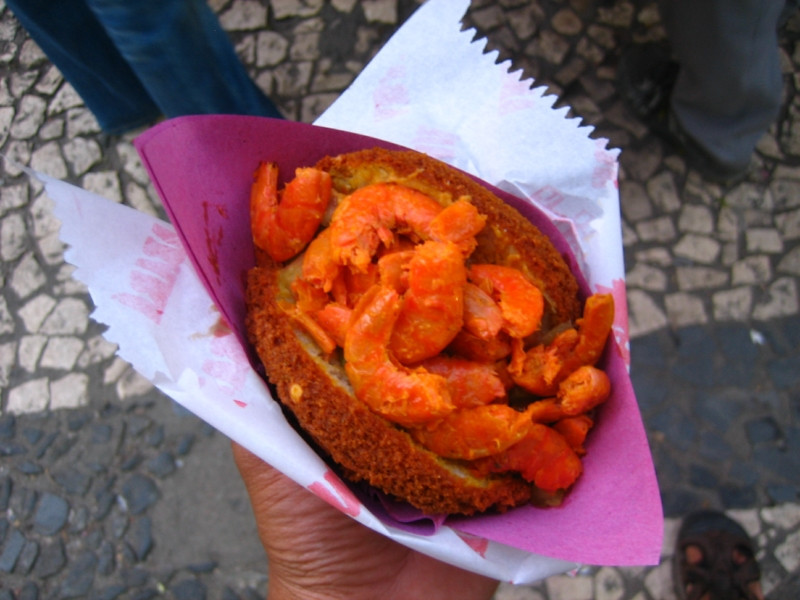 Acarajé is made with a dough of black-eyed peas (the band of the same name was going to be touring Brazil soon). The dough is deep-fried in dendê (palm oil) and is typically served with Vatapá, a spicy mix of shrimp and coconut milk. It was very tasty. 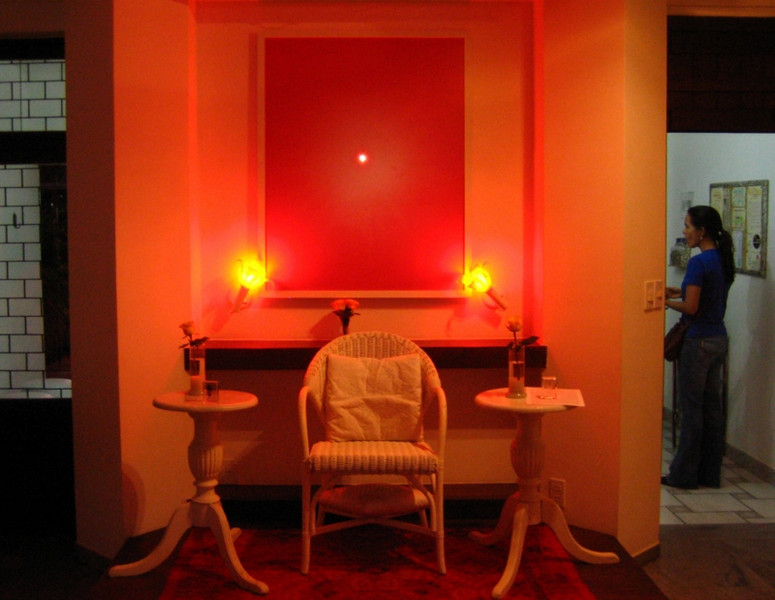 That evening, Lara's mom was going to a session at a Braham Kumari school, so I tagged along and had a chat with one of their teachers. This religious movement was started by the Indian spiritual leader, Lekhraj Kripalani in the 1930's. His teachings have been spread around the world and focus on open-eyed meditation (by staring at the light at the center of the image) and principles of knowledge, practice and service. They believe in dualism (mind-body separation), which I debated with the teacher about. 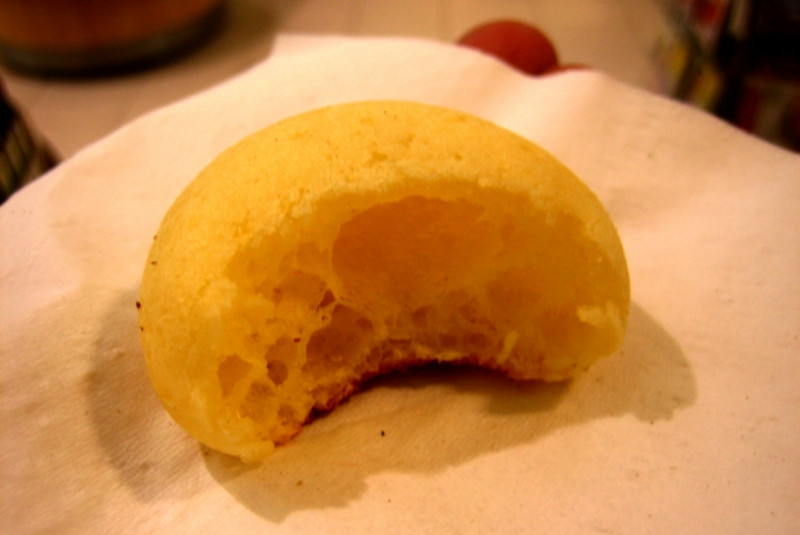 Having a snack of pão de queijo (cheese bun), a typical small bread of Brazil, which is common on the breakfast table. The taste is amiable because the inside is chewy and moist with a cheesy flavor. It's very easy to get hooked on them. 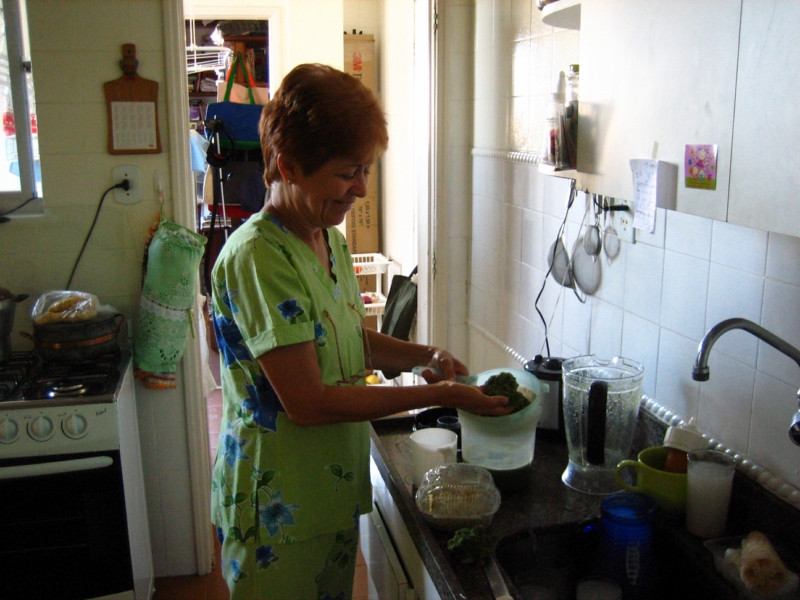 The next morning, Lara's mom was going for a walk in the state park and asked if I'd like to come along. Before heading out, she prepared a veggie drink loaded with dark greens and healthy ingredients like sesame seeds, an apple and other good things for your body. It felt like a much-needed detoxification after eating so much meat recently (I'm not a heavy red meat eater). With some vitamins and nutrients gulped down, we headed out to the park. 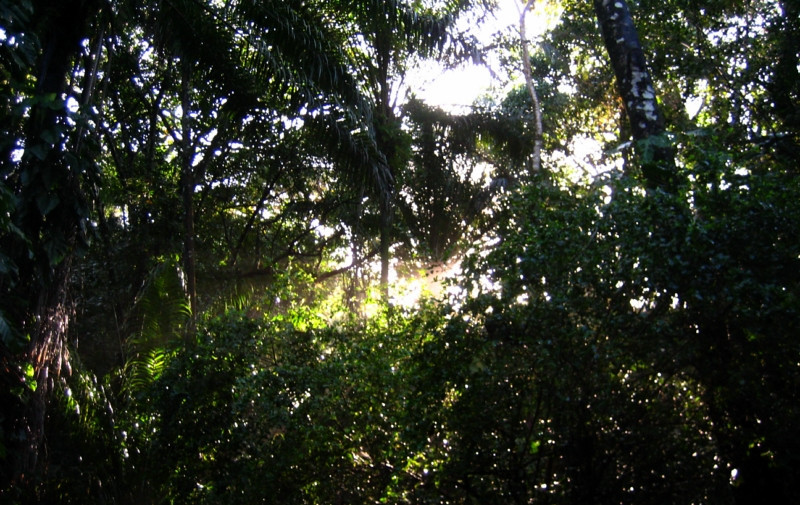 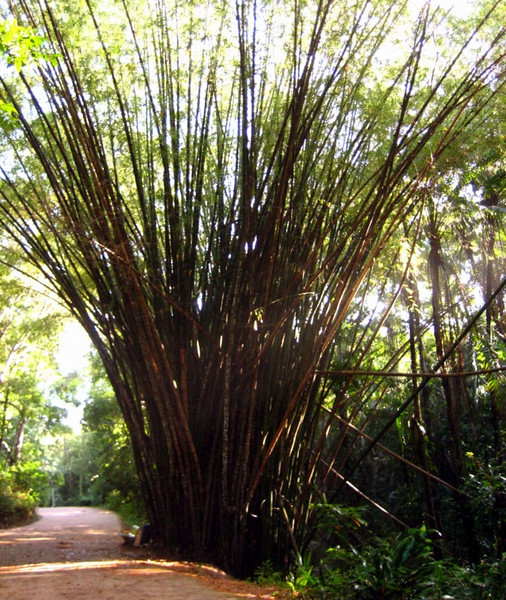 A huge bamboo tree in the park. 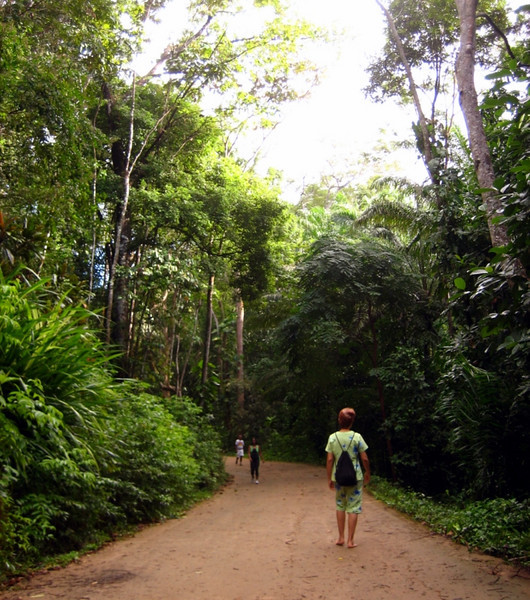 There was a trail leading deep inside, with many residents walking or jogging and soaking in the respite from the concrete jungle that surrounds this natural jungle. 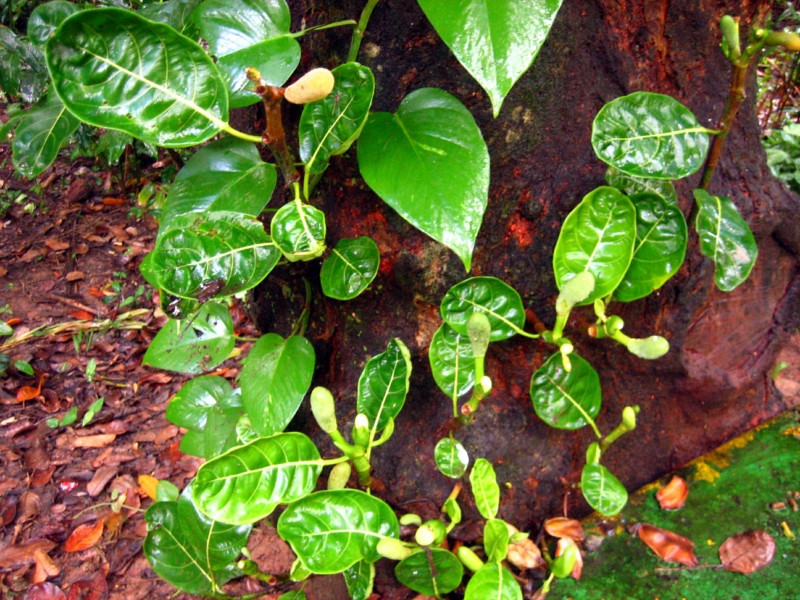 Plants growing from the trunk of another tree. The air was moist and damp, feeling like a proper rainforest. 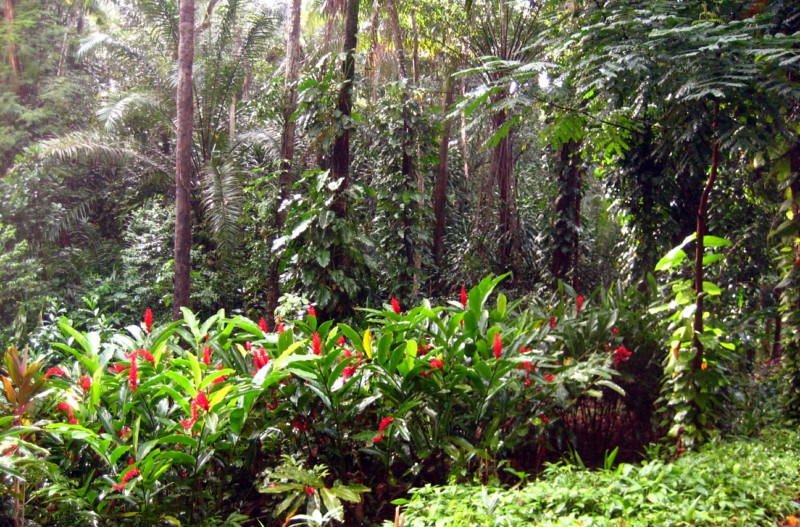 The vegetation was thick and the air was alive with numerous bird calls. What a nice way to start the day. 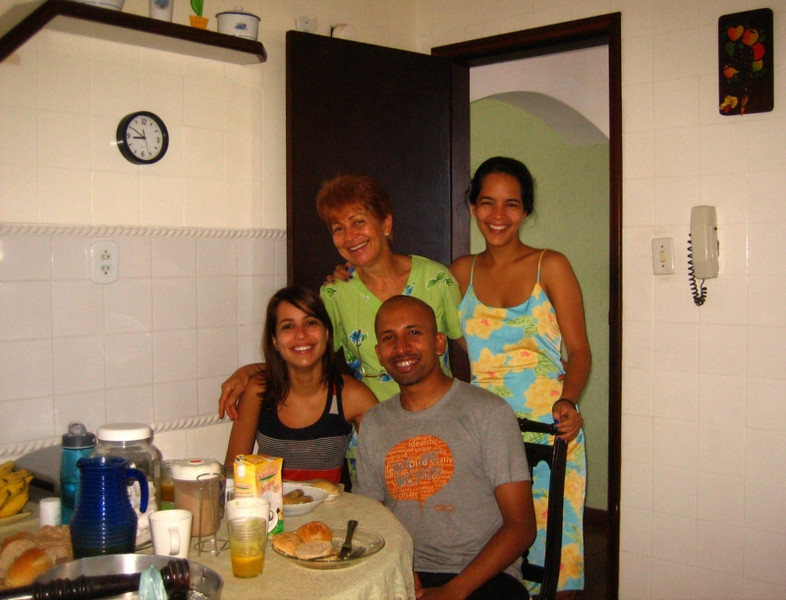 With Lara's mom, Lara and her sister, Liz, who plays bass guitar for an all-girl band in Los Angeles called Ladysugar. 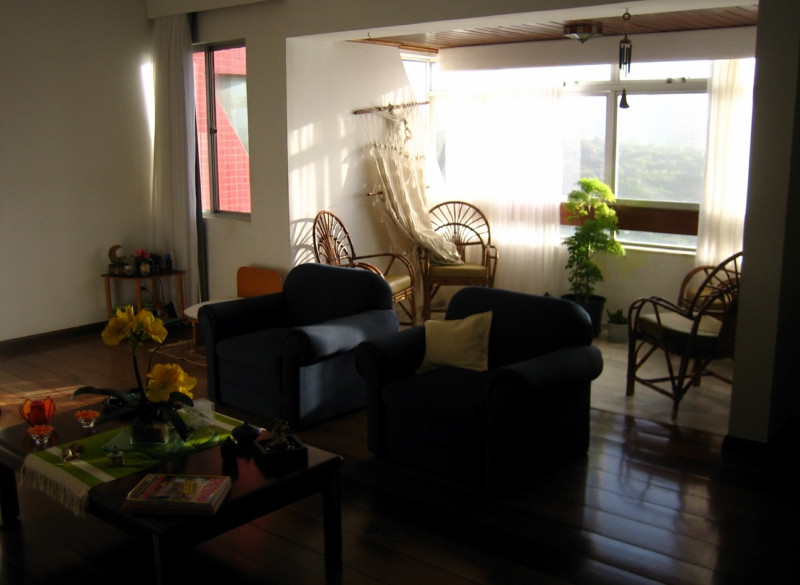 Their lovely home with nice views of the ocean. 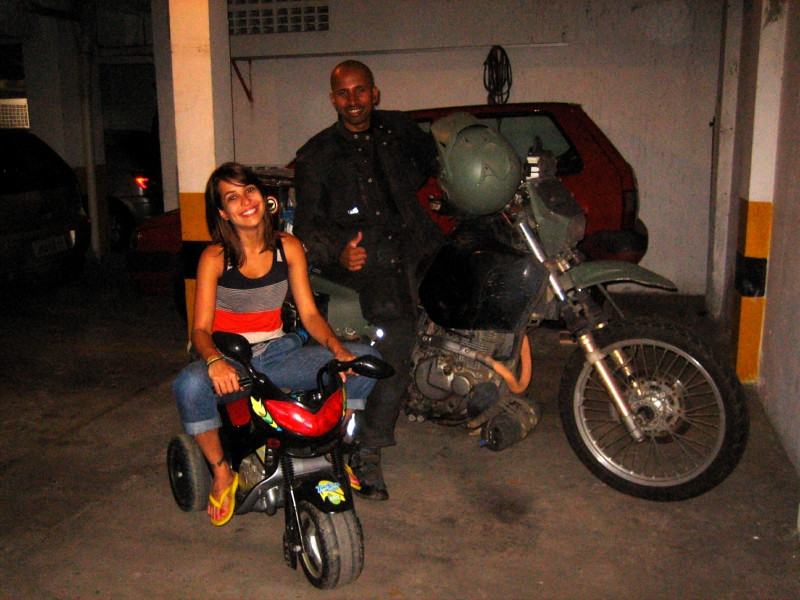 Liz wanted to come along on this tricycle as I was exiting the parking garage. Thanks for the nice time in Salvador, ladies.
_