The Pharaohs of Ancient Egypt and the grand civilization that they ruled over are famous throughout the world. My tour through Egypt let me see the different sides of this modern country. However, its well-preserved ancient past is what adds magnificence to this land.

In and around the present-day city of Luxor are the numerous architectural remains of the ancient city of Thebes. The city gained prominence for its luxurious lifestyle of its rulers and was also the center of Ancient Egyptian politics, culture and religion at various times during its history.

In the following photostory, I cover the Mortuary Temple of Hatshepsut, the Colossi of Memnon, the Valley of the Kings and Karnak Temple. It’s a lot of history and it’s very complex but I try to put things in context. Enjoy.

The grand Mortuary Temple of Hatshepsut, located beneath the cliffs of Deir el Bahari on the West Bank of the Nile. Hatshepsut was a rare female pharaoh and considered to be very successful during her reign, 1503 to 1482 BC. This temple, known as Djeser-Djeseru (Splendor of Splendors) was designed and built by Senemut so that she could be worshiped after her death. The temple is set on a series of terraces and this is at the middle terrace. 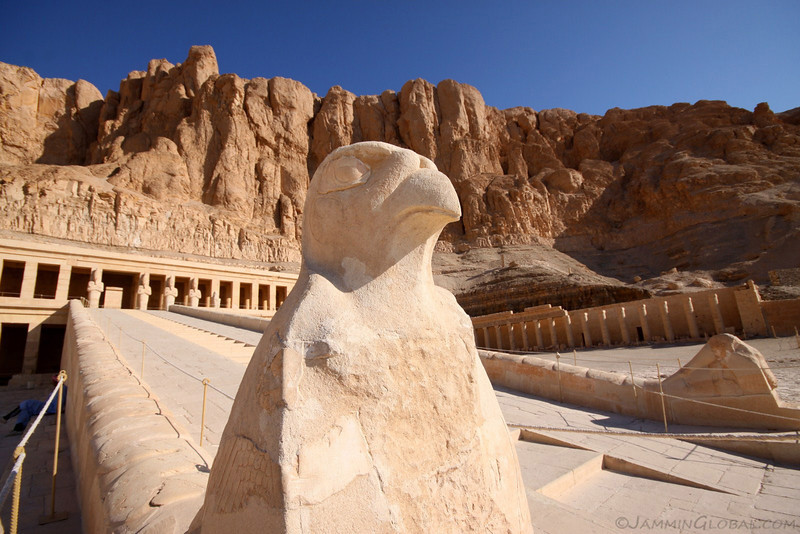 The guardian of the upper terrace with Deir el Bahari towering in the back.

The upper terrace is lined with statues of Hatshepsut in the form of Osiris.

From the Upper Court, looking out the gate with the Nile Valley in the distance.

Re-constructured pillars in the Upper Court. Many of these ancient monuments were rebuilt by recent historians and some were done with imprecise information, so maybe it didn’t really look like this back then. 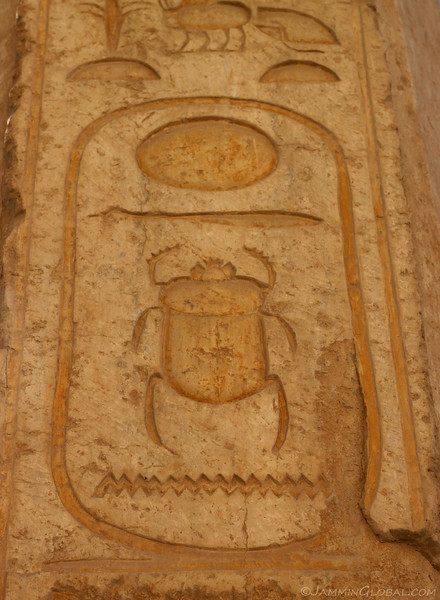 A cartouche of Thutmose II, Hatshepsut’s husband, on a pillar in the Upper Court. A cartouche is a series of hieroglyphs enclosed by an ellipse, indicating that the contents inside it are a royal name. The scarab, or dung beetle, was a prominent symbol in Ancient Egypt. This beetle is known for rolling a ball of dung along the ground as it moves this food source around. Ancient Egyptians associated this with the sun moving across the sky and thus the scarab is associated with sunrise and creation. 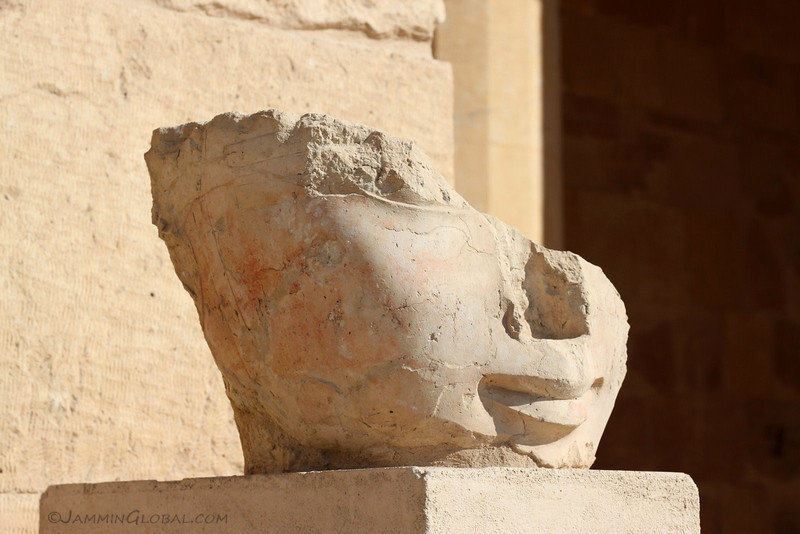 A broken statue of Hatshepsut, missing its body, out on the upper terrace. 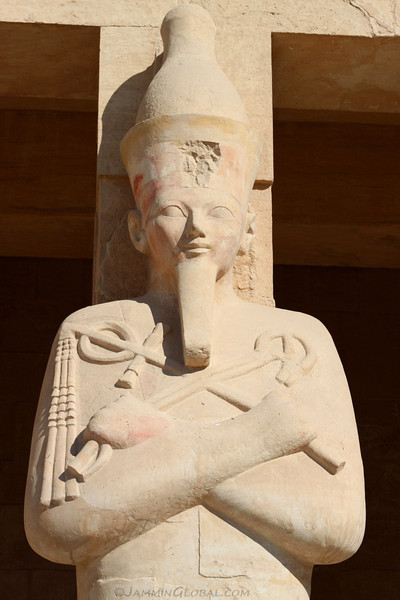 An Osiride statue of Hatshepsut, flanking the entrance to the Upper Court. Even though she was a female, she was depicted with a traditional pharaonic beard to cement her position as ruler. Many pharaohs had statues of themselves in the form of the god, Osiris, because he’s the god of the afterlife. Osiris can be identified as he holds the symbolic crook and flail, with the crook being a symbol of shepherds and the meaning of the flail is not known.

The Birth Colonnade, to the right of the Middle Terrace. Hieroglyphs in this section depict the story of Hatshepsut’s divine origins, where the supreme god Amon-Ra visits Hatshepsut’s mother, Queen Ahmose, and impregnates her with his divine breath. Sounds similar to a story that happened around 0 BC…

Past the Birth Colonnade is the Chapel of Anubis, decorated with colorful murals that have stood the test of time. The ceiling was covered in yellow stars, with the walls telling detailed stories of Hatshepsut. 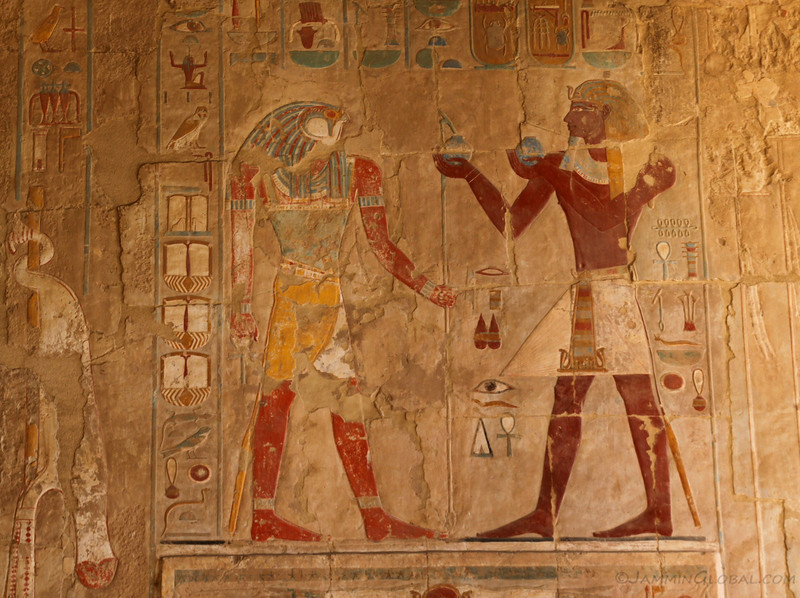 A depiction of Sokaris receiving wine from Thutmose III in the Anubis Chapel. Sokaris is a sun god with a falcon’s head and Thutmose III is the son of Hatshepsut, who succeeded her as pharaoh. However, this son suffered from an inferiority complex of his much-lauded mother and proceeded to chisel her name and image from all monuments in the kingdom. Her story, that of the first female pharaoh, was only recently revealed by archaeologists studying hieroglyphs.

A depiction of Anubis, the jackal-headed god and I presume his wife, Anput, his female aspect. Anubis is associated with mummification and the afterlife and his head comes from the association of jackals with cemeteries, because they were known to dig up bodies and eat them. These gods are shown holding the Ankh, a symbol of eternal life and the Was scepter, a symbol of power of dominion, carried by lesser gods in mortuary scenes such as this. 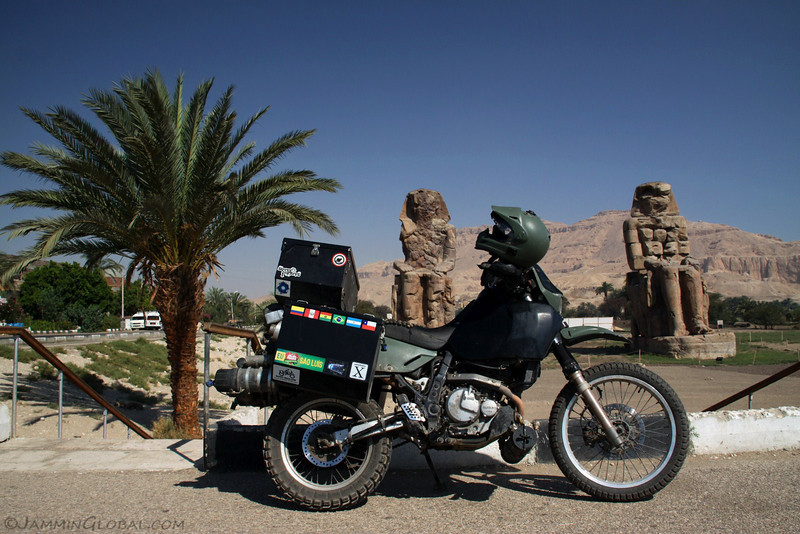 sanDRina and the Colossi of Memnon: two giant statues, right by the road and free to visit.

Both the statues depict Pharaoh Amenhotep III and have been here for the past 3,400 years. It’s hard to assess scale but they’re both 18 m (60 ft) tall. 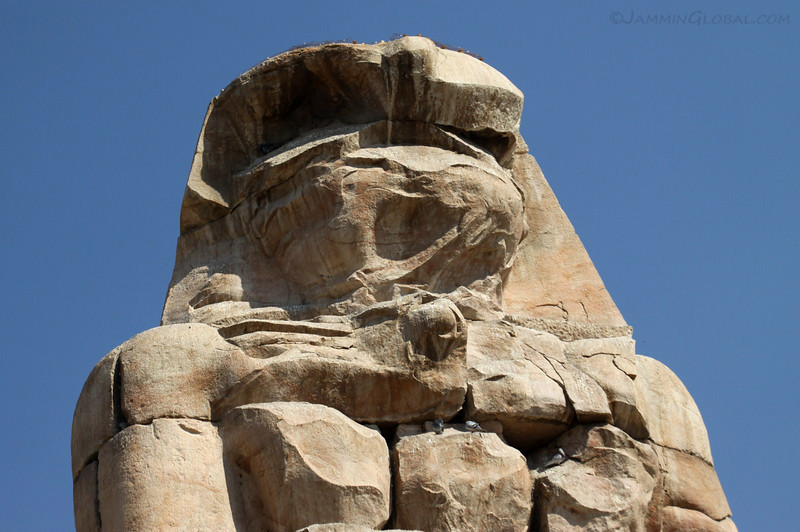 A close-up of the right colossi with pigeons nesting in his chest. They’ve been battered by earthquakes and floods from the Nile, but still going strong. 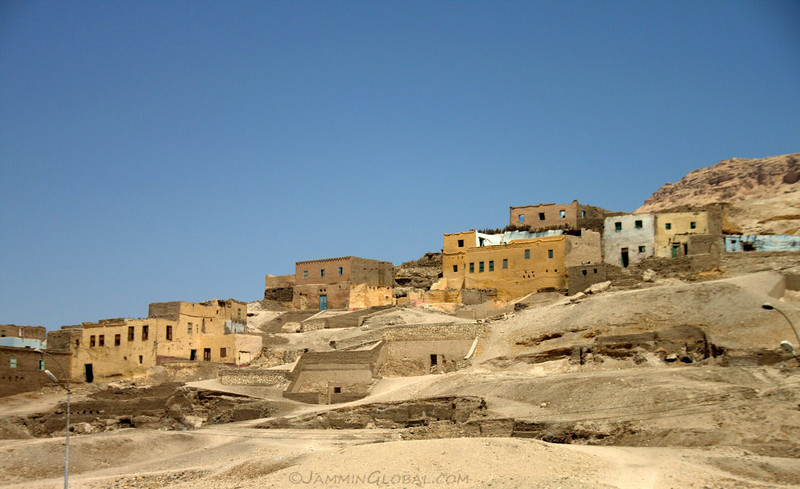 The abandoned village of Qurna, that was built by settlers in the late 19th century near and on top of the tombs at the Valley of the Kings. 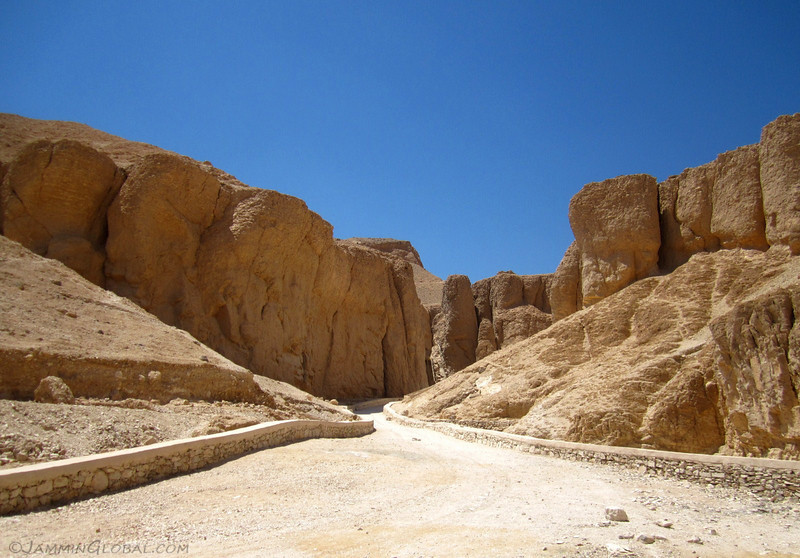 The Valley of the Kings on the West Bank of the Nile in Luxor. After the grand pyramid-building of the Old Kingdom of Egypt (2686 BC – 2181 BC), the New Kingdom (1600 BC – 1100 BC) decided to move their tombs underground and this valley, across from the ancient city of Thebes, housed most of its royalty in the afterlife.

Tombs were discovered and pillaged throughout history with archaeologists conducting systematic excavations since the late 18th century onwards. A total of 63 tombs have been revealed with many more yet to be discovered. Due to on-going archaeological work, only a few tombs are open for public visitation. A standard entry ticket allowed me to visit 3 tombs of my choice with an additional fee for special tombs, such as that of Tutankhamun.

The tombs are cut down into the limestone cliffs, descending through a series of steps to the burial chamber. This is the tomb of Pharaoh Siptah (KV47) and it was much cooler here than the baking heat outside.

The grand sarcophagus of Pharaoh Merenptah (KV8), who ruled from 1213 BC to 1203 BC. He was one of thirteen sons of Ramesses II. His burial chamber was the largest of the three that I visited and I wondered how long it took to carve these chambers.

The red granite sarcophagus of Ramesses I. His burial chamber has suffered from water damage and these pillars have been added to bolster the chamber. At the foot of the sarcophagus is the depiction of Osiris (in white) and Khepris, who has a black scarab for a head, representing rebirth.

The tomb of Ramesses I decorated with colorful murals with stories from the Book of Gates, a funerary text that narrates the journey of a newly deceased soul into the afterlife. Here, the dead king is lead by Horus, Atum and Neith to Osiris.

A niche in the burial chamber depicting Ramesses I in his Osiris form with a ram-headed version of Anubis supporting him as he stands on a wavy snake, confronting another snake, Meseret.

On the East Bank of the Nile in Luxor, I followed the line of uncovered sphinxes that starts at Luxor Temple and leads to Karnak Temple. This Sphinx Alley connects the two grand temples and was used by the ancients for a yearly procession depicting the marriage of their prominent gods, Amun and Mut. Egyptologists guess that there were around 1,350 sphinxes lining this road, which is slowly being uncovered, but urban sprawl is in the way. 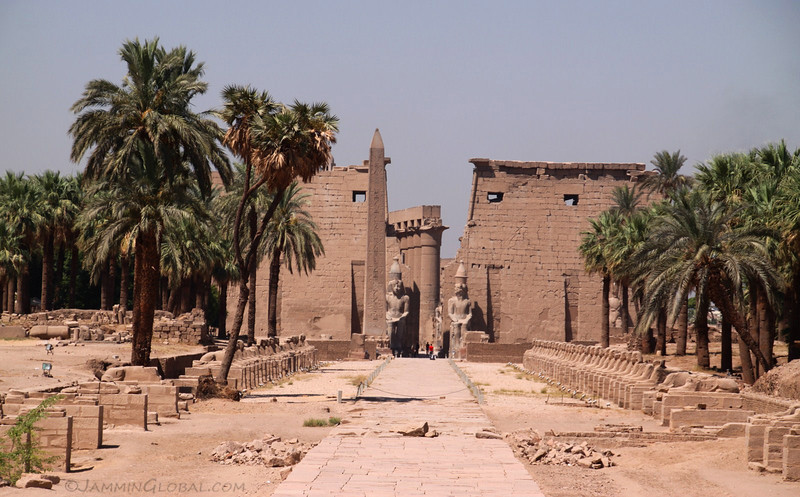 The Temple of Karnak, the holiest of religious places for Ancient Egypt. Construction began in the Middle Kingdom (2000 BC) and continued till the Ptolemaic period (300 BC). A processional way is lined by sphinxes that lead to the first pylon, resembling the design of Luxor Temple. Again, it looks like an obelisk is missing.

The grandest feature at the Karnak Temple Complex is the Great Hypostyle Hall. It’s a 5,000 sq-m (50,000 sq-ft) hall with 134 giant pillars, resembling a papyrus marsh.

The proportions are out of this world and it’s mind-boggling to think about how this giant monument was put up, that too in 1290 BC. Pharaoh Seti I commissioned and set about building this ‘temple of millions of years.’

A close-up of one of the taller central pillars, resembling an open papyrus flower. The central 12 columns are higher than the rest at 21 m (69 ft) and have a girth of 10 m (33 ft). 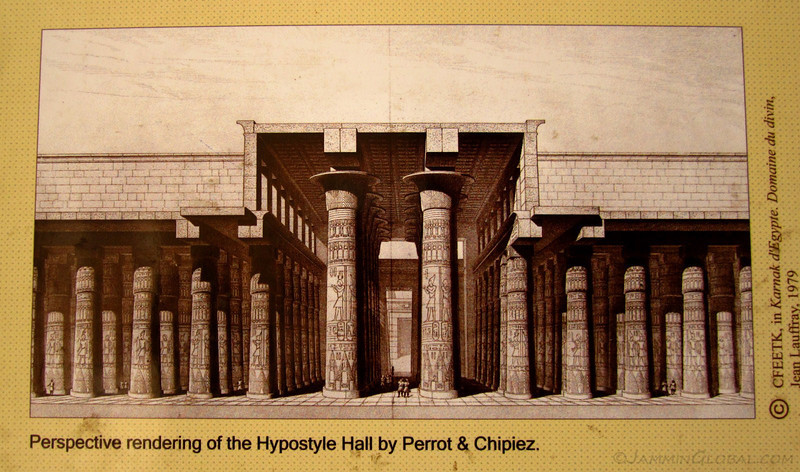 This is an artist’s rendition of what the Great Hypostyle Hall looked like in its hey-days. 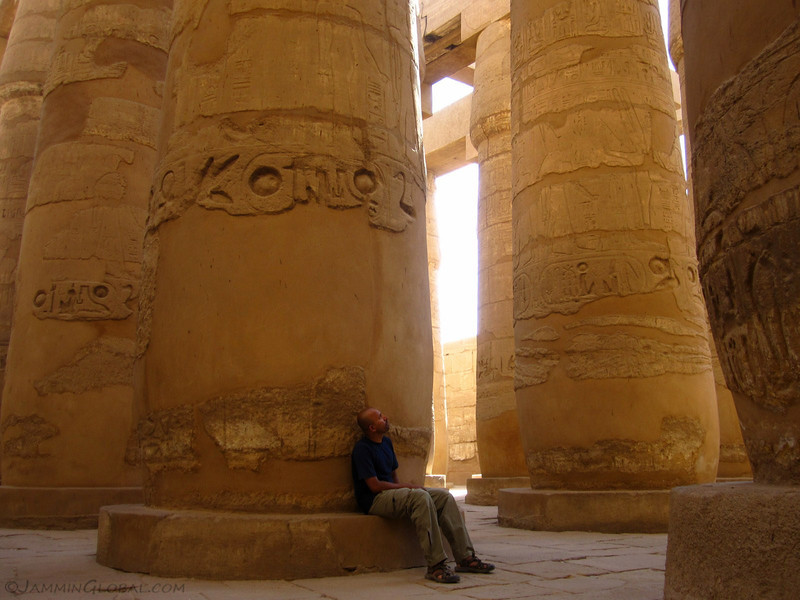 It was so peaceful to be among these giant columns, soaking in the grandeur of Ancient Egypt.

Walking deeper into Karnak Temple and appreciating the scale of things.

From the Central Court looking out to the main temple complex with the prominent Obelisk of Thutmose I.

More giant pillars in the back, making up the Festival Hall of Thutmose III with colored decorations on the roof. 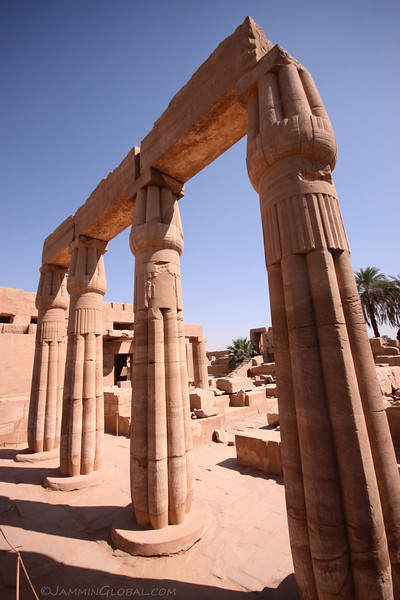 Columns in the shape of bundled papyrus. 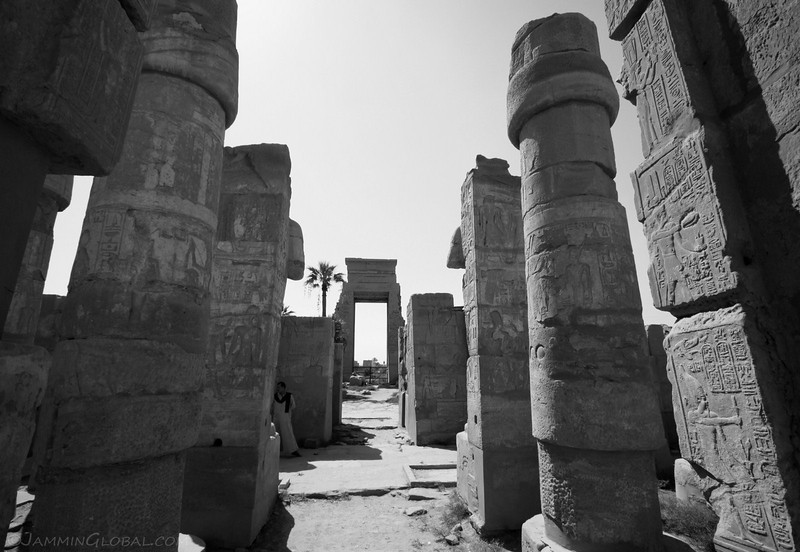 A local guide, among the ruins of Karnak Temple.

A cartouche with a scarab and the Obelisk of Thutmose I in the background, carved from a single shaft of red granite from Aswan.

Hieroglyphs on the walls around Karnak Temple, telling stories of conquest and other tall tales that have survived through time. 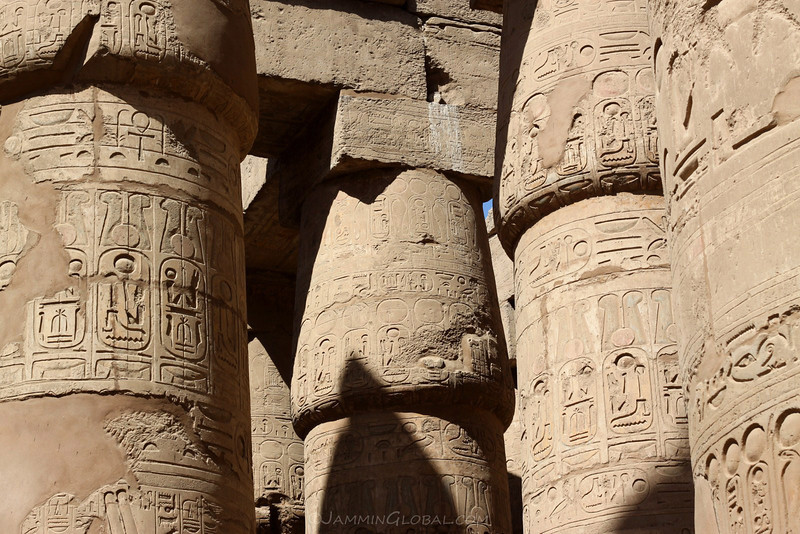 Cartouches and hieroglyphs decorating the closed-bud papyrus pillars of the Great Hypostyle Hall. 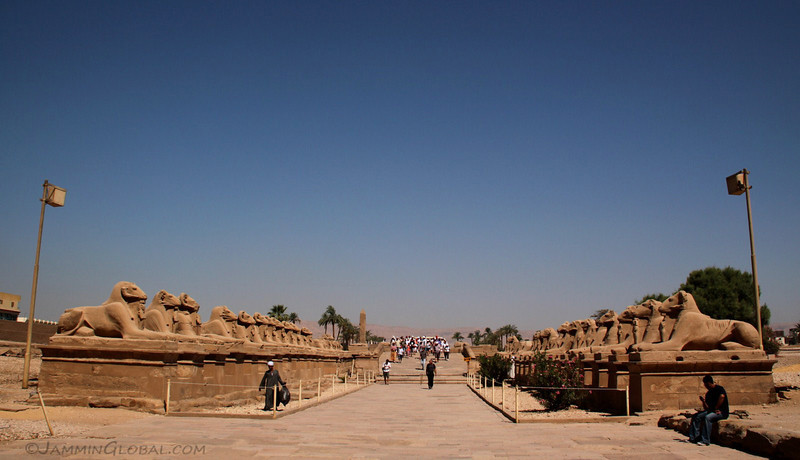 A parting shot of Karnak and Luxor: the processional way, lined with sphinxes.

I was grateful for the chance to see these grand monuments from our past that have survived these thousands of years. It astonishes me how grand the ideas and buildings were that were conjured up by ancient rulers, that too, most of the time for their own vanity or religious purposes.

With that, I was now done with touristy Egypt and the hagglers that go along with every tourist site there. The monuments are fantastic and definitely worth a visit, but now I was looking forward to traveling again, with an upcoming ferry journey…

Previous: Egypt, Part 12: Across the Desert into Present-Day Luxor

4 thoughts on “Egypt, Part 13: The Magnificent Egyptology of Ancient Luxor”