I was getting near the end of my trip in Europe and had a fabulous ride through the Italian Alps as I made my way down to Venice, to catch the ferry to Alexandria. The mountainous roads were excellent for riding and I enjoyed the architectural heritage of Venice. 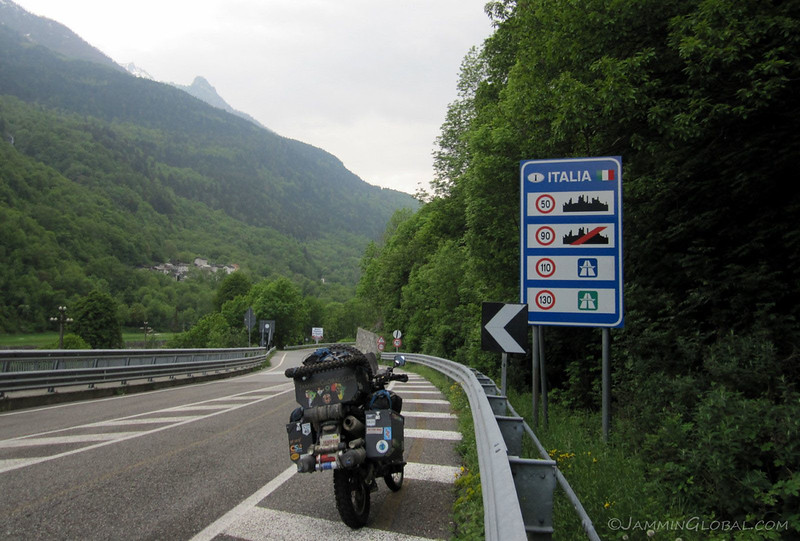 Entering my last country in Europe, that land of pasta and Ferrari, Italia. 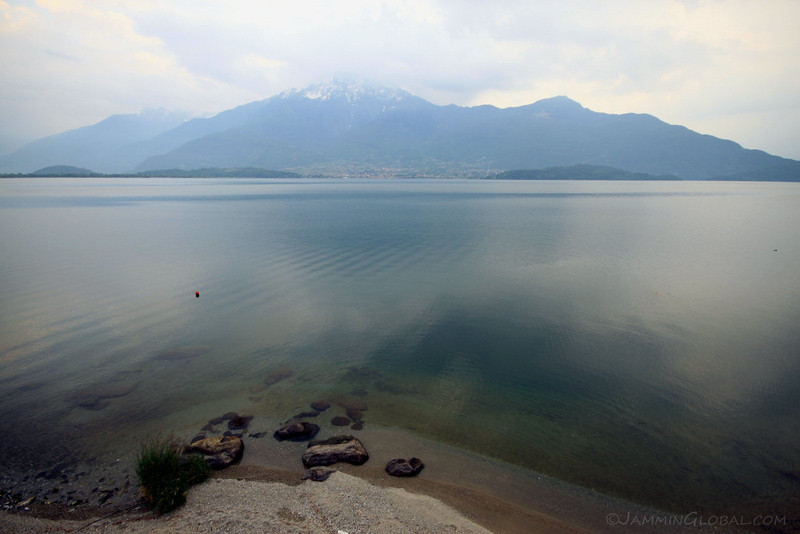 Within a few kilometers of the border, I was at the shores of Lake Como, the famous getaway for Italians and the jetset crowd. 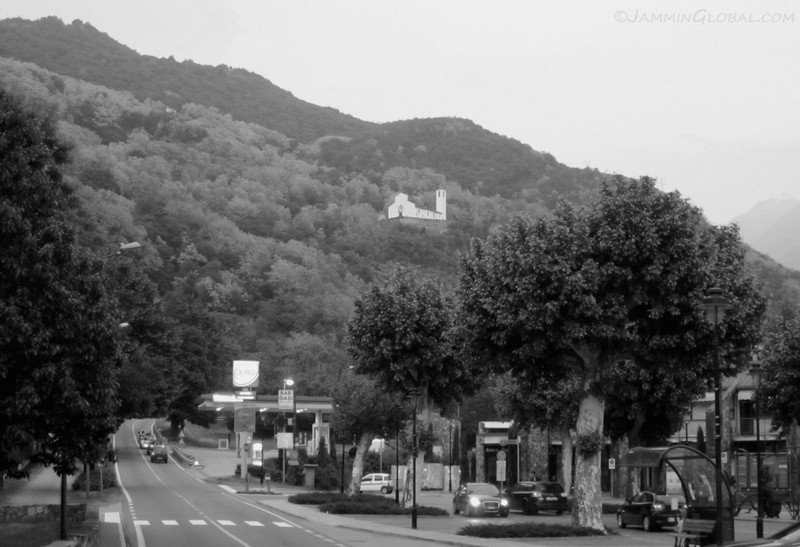 Passing thru the town of Sorico and noting the church poised high above in the hills and commanding attention and respect. 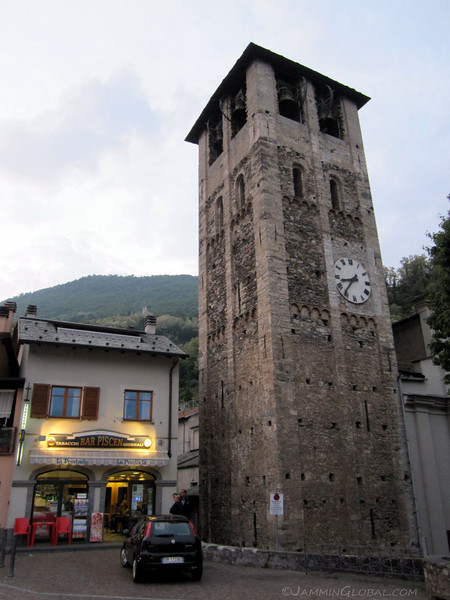 The old, stoney clock tower next to a modern tabacchi (convenience store for cigarettes, espresso and lottery tickets). 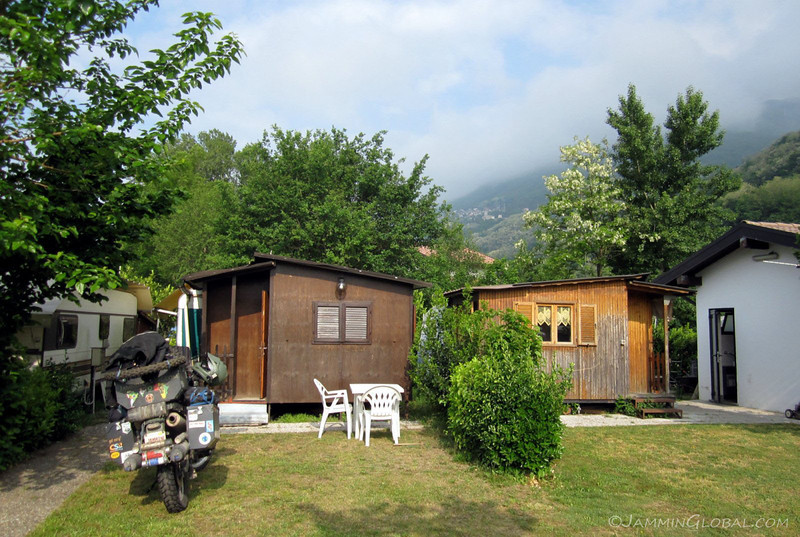 I spent the night at a nearby campground for a hefty fee of €22.

Heading east the next day and riding through the industrial valley around Delebio and noting the nearby massive mountains. I also spotted the sign for Tata, an Indian automotive company.

The foothills of the Alps were looming ahead and whispering of twisting roads.

Looking back at the industrialized valley I had passed through with Lake Como off in the distance.

Looking across the valley at a small commune surrounded by thick forests.

I was enjoying the ride and had to stop often to admire the views. The prominence of the Alps is what left me in awe. I would see some clouds on top of some mountains in the foreground and then see some dark patches further back and realize there were bigger mountains behind the clouds.

Narrow Italian Alpine roads, meant for sport cars and motorcycles. Note the lack of a shoulder, being barricaded with guard rail on one side and rock face on the other. 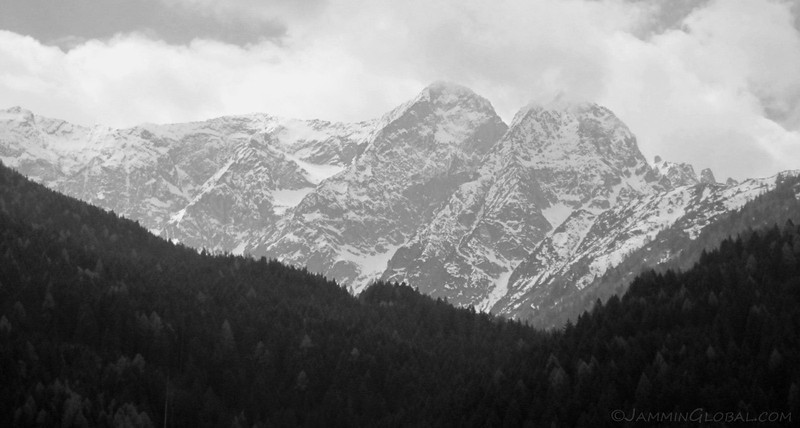 Getting very close to the snowy Alps. I had only seen views like this when I went on ski trips and didn’t think I could get this close on a motorcycle. In the US, the Rockies lose their snow pretty quickly, but I am still very early in the season, with snowfall just ending a few weeks back here. 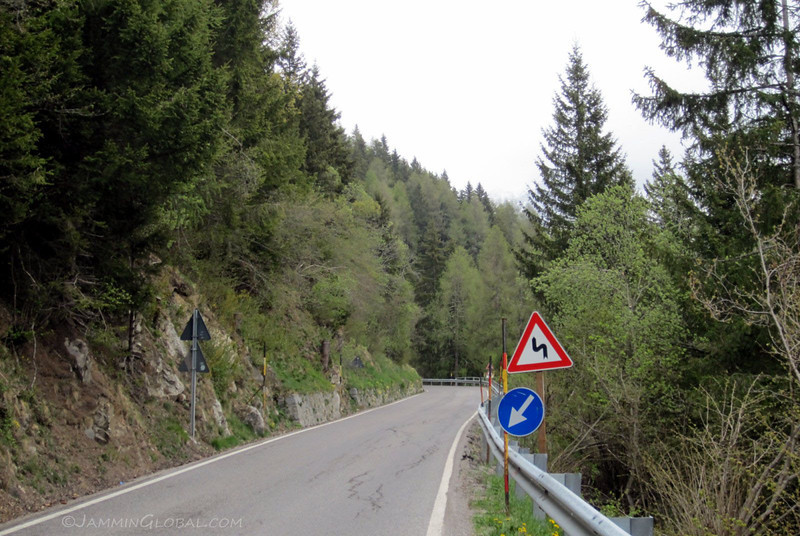 The roads were well-signed and I was enjoying the tight, technical riding.

Another awesome vista of the Alps, which were formed around 60 million years ago when the African continent pushed the Italian peninsula into the European continent and raised the crumpled land. They are still growing by about a centimeter each year. 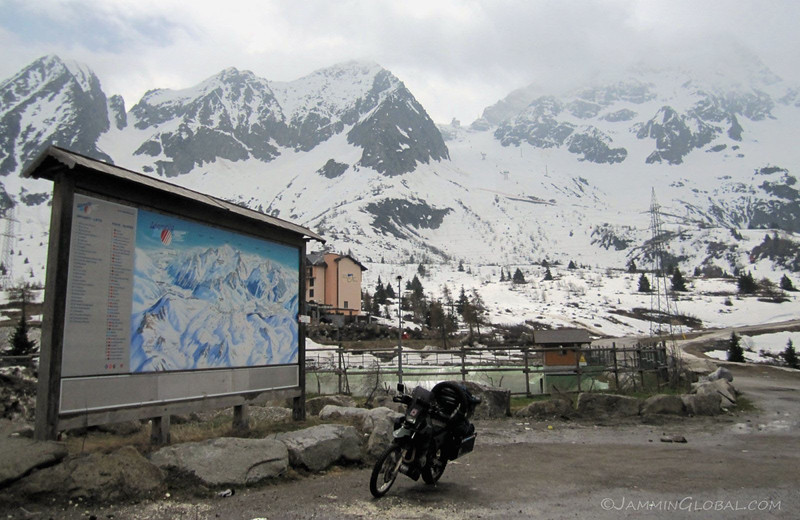 …that had a still running ski resort heading off into the peaks. I guess this is some really late spring skiing, but if there’s snow, why not. I had skied in Europe once, across the Alps in Austria and had a good experience getting to know this snowy land. 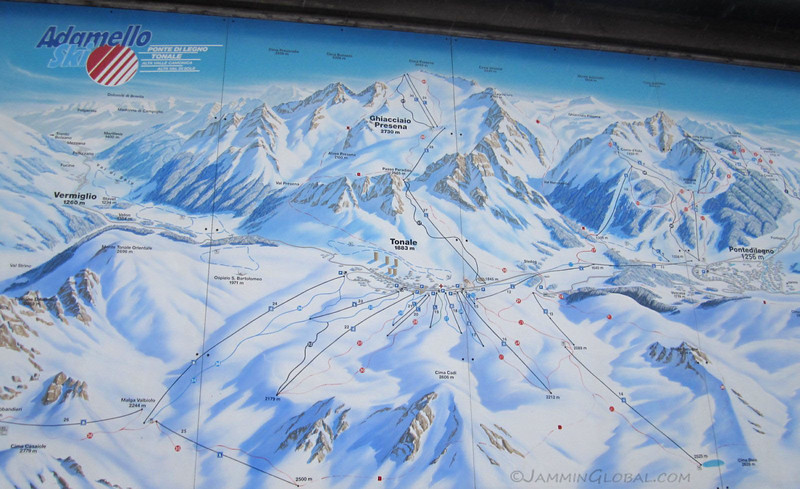 The ski resort map, with me coming from the left and heading down to the right. It snows at much lower elevations in the Alps than the Rockies or Andes.

A clear view of the snow-covered Alps. I had been much higher in the Andes, that too in winter and hardly came this close to snow.

From there, I exited the snowy parts of the Alps and it got warmer as I got down to the foothills. Pulling off in this rest stop for…

…a spot of lunch at the L’Oasi del Groll mobile cafe. I chatted up some Italians in a nearby work van and they concluded that I could afford to travel like this because I was from India, which is a booming country now, unlike Italy, which is stagnating. I guess seeing Tata trucks drives the message home. I was surprised and pleased that citizens of a developed country like Italy would recognize people from India to be rich, nowadays. They’re probably selling more Ferraris in India and China than here.

Down in the valleys again, but the mountains weren’t far away.

I got on the highway, which with four lanes was taking up all the space available in this narrow canyon.

Leaving the Alps, the landscape got more industrialized as I got closer to Venice.

Riding down this channel, close to the sea and arriving at…

Camping Fusina, where I spent my last night in Europe as I would be taking the Visemar ferry the next day to Egypt.

After settling in, I took a small ferry across the bay towards the old part of Venice.

Crossing the shipping lane that I would be taking the next day as I exited Europe.

The island of San Giorgio in Alga, shining in the late afternoon sunlight. Monasteries were built from 1000 AD onwards but a fire in the 18th century destroyed most of the buildings and it’s currently abandoned.

Approaching the modern residential part of Venice, the island of Sacca San Biagio on one side of the Giudecca Canal. It’s a recent island, which was made in the 1930s after being used as a landfill for the city.

And the traditional older part of Venice on the other side. It’s right on the Adriatic Sea, which cemented its role as an important port to Europe for centuries.
Click here to see the high resolution version.

Getting close to shore and… 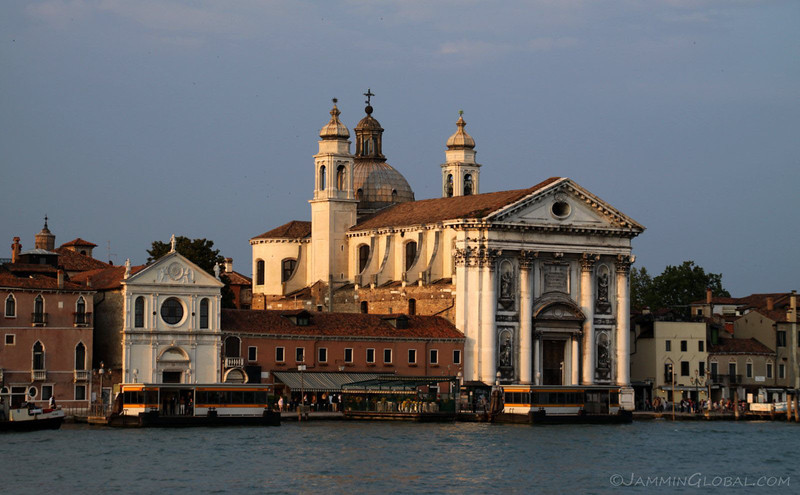 …arriving at Zattere in Dorsoduro, where the ferries docked.

Ahh, good ol’ Venice, still surviving with its buildings surrounded by the waters of the Venetian Lagoon. There are no roads in old Venice, except for canals navigable by small boats. Its history dates back to Roman times, with the majority of expansion from the 9th century onwards. The buildings sit on sunken wooden piles, that have become petrified into stone over the centuries

Crossing the Accademia bridge over the Grand Canal, that cuts through the city. 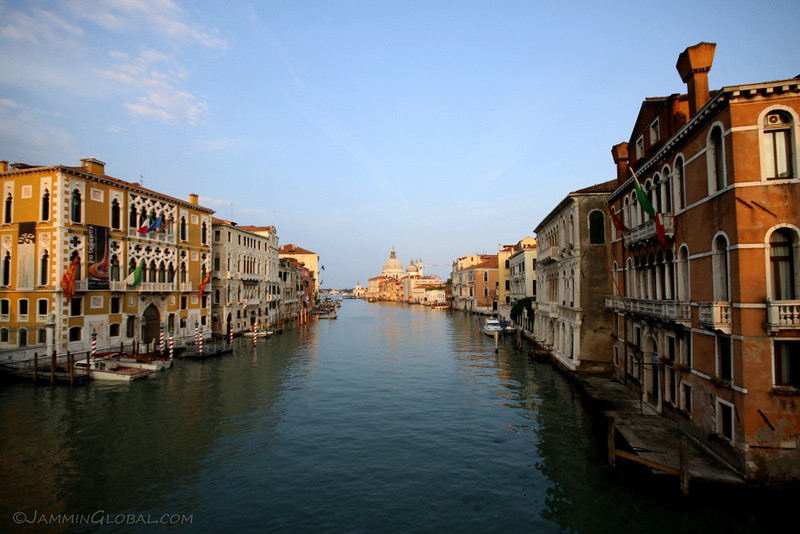 The classic shot of Venice, showing its buildings right on the water’s edge. 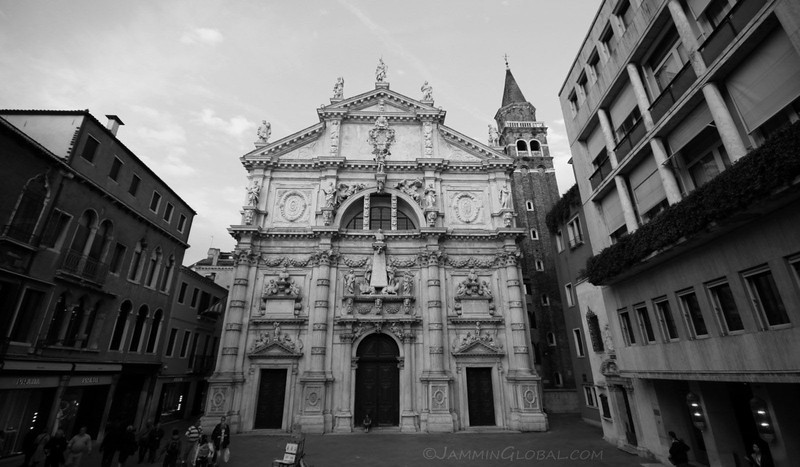 The Chiesa di San Moisè, a Baroque church dedicated to Moses, which was rebuilt in the 9th century.

Pizza San Marco (St. Mark’s Square), which is regularly flooded in the acqua alta season (spring and autumn) due to the tides of the Adriatic Sea. With the ever persistent rise in sea levels, Venice has been ear-marked as a city that would succumb pretty quickly as sea levels rise over this century due to global warming. They’re trying a technical solution of building a huge movable sea wall but I think that too will be overcome by the rising sea within a few decades. The city might have to be abandoned at some point in the future.

But before that, come over and enjoy the splendid setting that old Venice harbors. A street lamp in the shadows of Campanile di San Marco, the bell tower of St Mark’s Basilica.

The stunning Byzantine facade of the Basilica Cattedrale Patriarcale di San Marco, built in 832 and intended to project Venetian wealth and power. 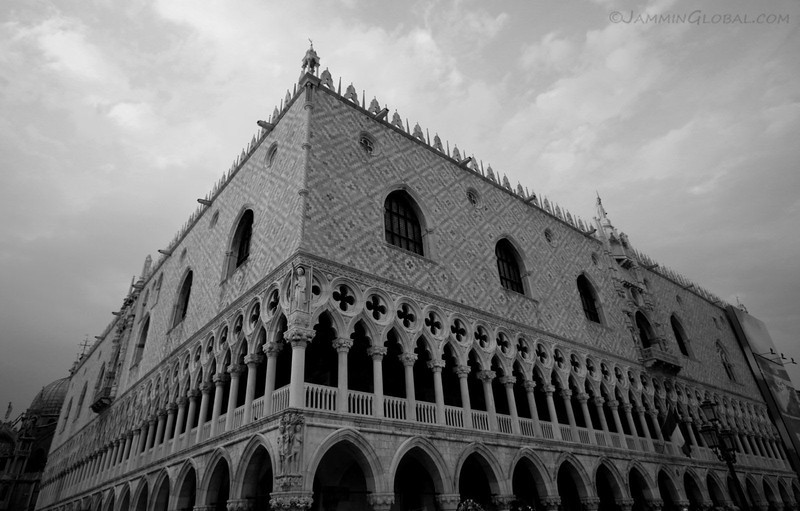 The Doge’s Palace, the residence of the rulers of Venice, built in the 14th century. 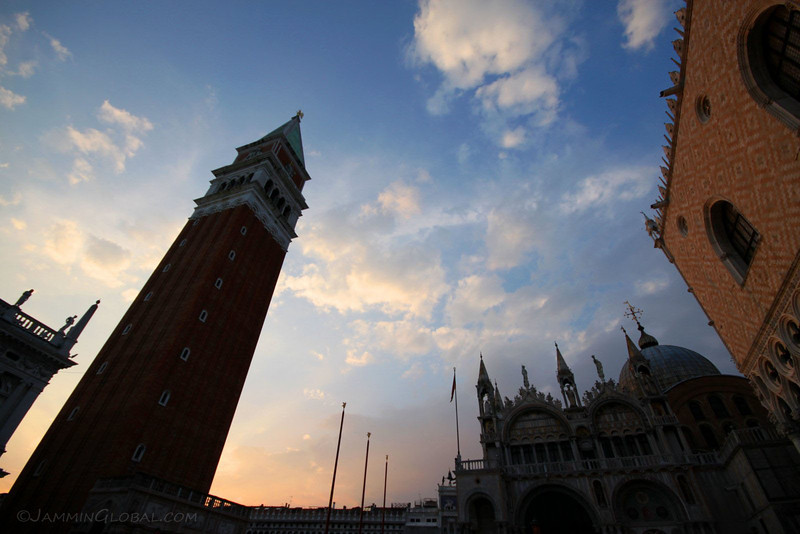 A sunset shot of the three main sites around St. Mark’s square.

What would Venice be without its gondolas? The island of San Giorgio Maggiore in the background. 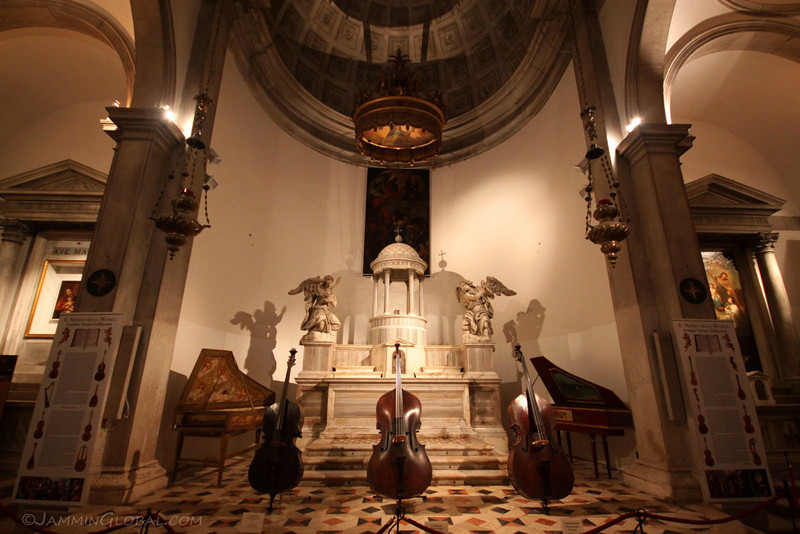 Walking in to an exhibition of old string instruments from the Artemio Versari Collection, put on by Il Museo della Musica.

Appreciating the details of this Contrabbasso, played by Niccolo Amati in 1670. 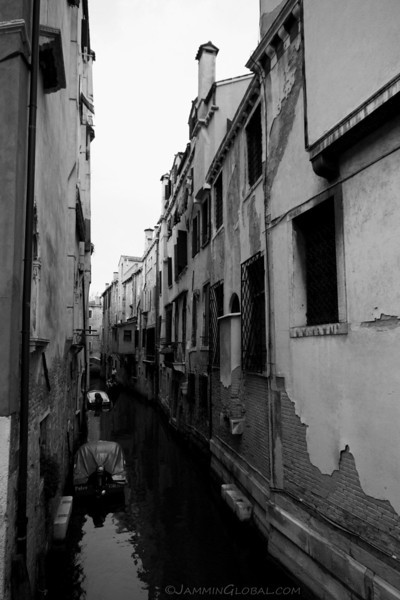 Most of Venice has not changed for hundreds of years and this photo could be from two centuries ago. 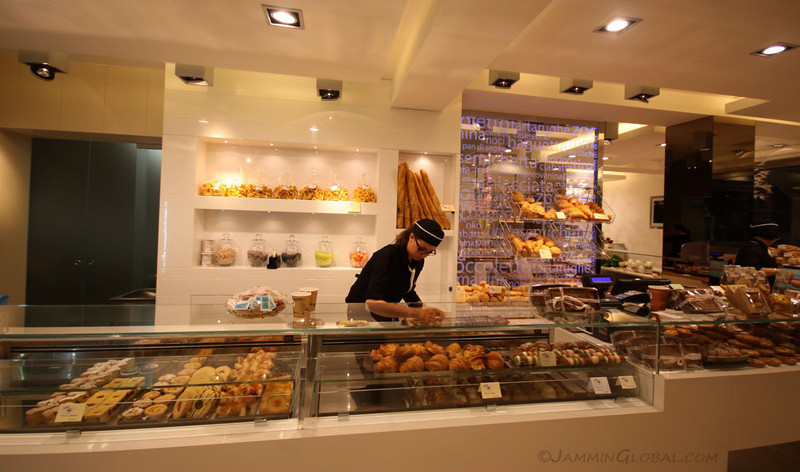 But in contrast, the shops are very modern, like this pastry shop. 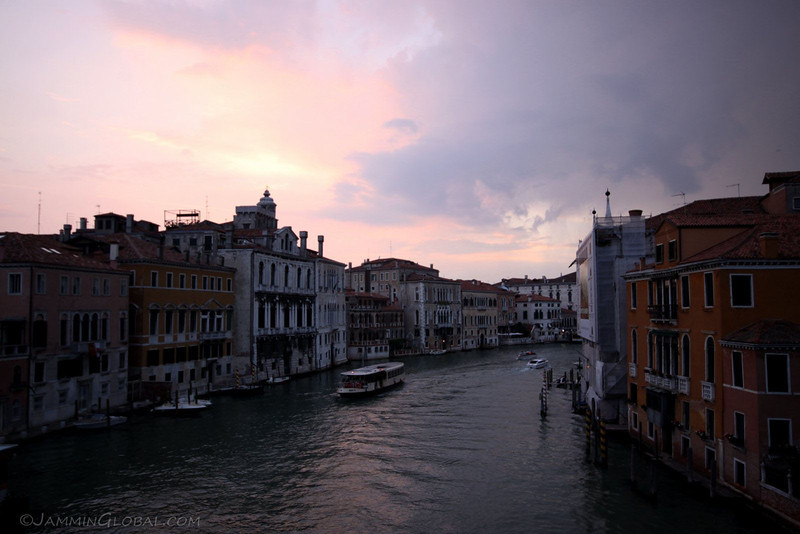 Walking back to the ferry and enjoying the sunset over this time-trapped, sea-locked city. 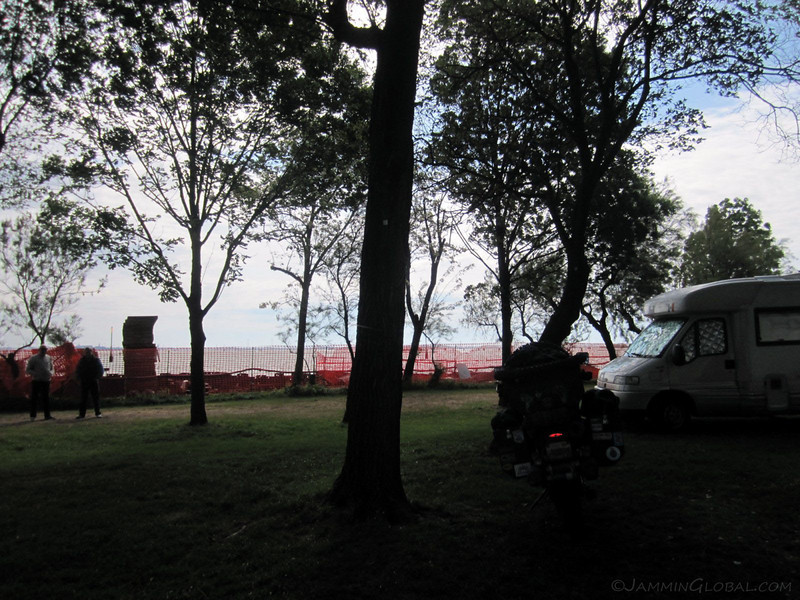 Back on the mainland, the campground was right on the sea shore and I was surrounded by camper vans.

Passing through Italy was a nice way to end my trip through Europe. The Italian Alps provided some stunning scenery and excellent riding and I know there’s a lot more to explore in those mountains but Africa was calling.

I enjoyed the past few weeks in Europe and was glad to have met so many interesting people whom I could connect with. I criss-crossed the continent and passed through varied landscapes, from industrial flat lands through to snow-peaked mountains.

Next: Crossing the Mediterranean on Visemar One

Previous: Europe, Part 5: Switzerland, for maintenance and the Alps

4 thoughts on “Europe, Part 6: The Italian Alps down into Venice”